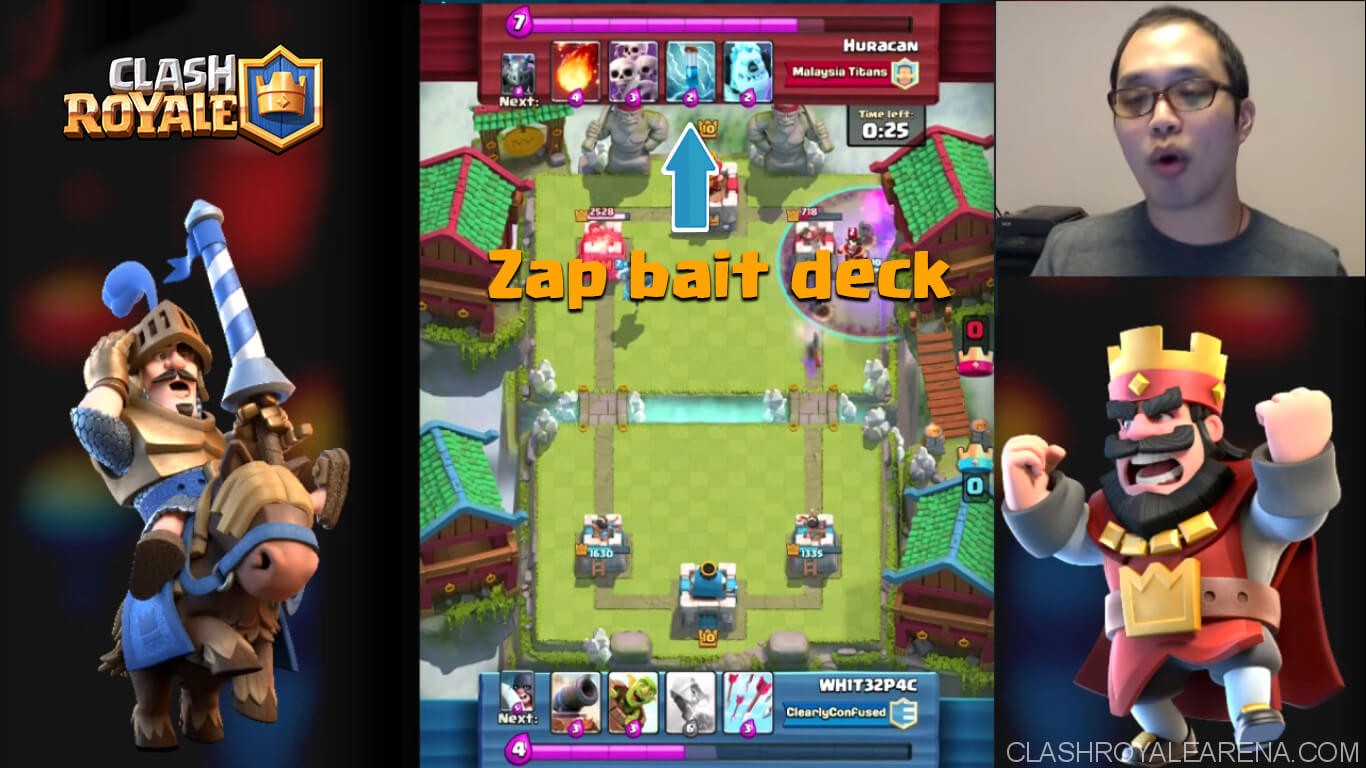 Hey guys! It’s NebulaNoodle here, with my 4th guide here on CRA. This deck is an interesting zap bait deck with Sparky. Hope you enjoy! I’ll try to stay active and keep writing guides if I can, as I really enjoy doing this and I hope you enjoy reading as much as I did writing this!

Seriously, Sparky has gotten a massive boost in power. Even with the slight damage nerf that doesn’t impact Sparky too much as she still unleashes MASSIVE damage! And now with the buff in reload time she can kill tanks more efficiently. Use her with Goblin Barrel on counter attack to force the opponent to zap!

Zap has increased in usage and is used by many top players ever since the Bats buff. Even better, because tourney standard zap doesn’t kill tourney standard goblins! Only use Goblin Barrel in this deck if yours is overleveled and doesn’t die to the usual level of zap faced in your arena. If you have an underleveled Goblin Barrel, use Hog or Miner. Both cheap and efficient win conditions. Use in quick pushes with Ice Golem or in bigger pushes with Sparky. 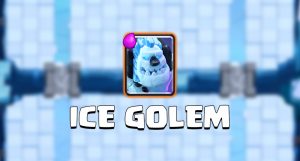 Paired with the Inferno Dragon this card is so strong. She kites big tanks like Mega Knight or PEKKA while the inferno dragon melts it down, and when the Ice Golem dies it slows the tank so it takes longer for the MK/PEKKA to reach the Inferno Dragon. Even if there is an e wiz behind one of these cards you can distract with Ice Golem or something like Bats.

These critters offer zap bait and also huge defensive value. They have huge DPS for only 2 elixirs and synergize well with most cards in this deck. For example, you can push with barrel/bats (zap bait!) 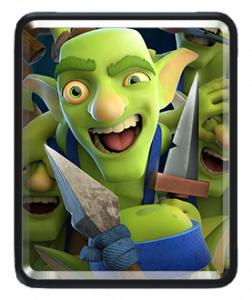 A staple of zap/log bait decks. The stab goblins live after the zap so they can continue to hack at the attacking troop(s). Also deals around 1000 damage to the undefended crown tower! They are a good opening move (split them at the back) so you can defend both sides if your opponent decides to rush one side with Hog/Barrel/Miner. The spear gobs also got a slight buff so it might be helpful in certain situations.

t big pushes so my Inferno Dragon can do its job better to melt everything away. Kills archers, goblins, goblin gang….basically does really nicely against swarms. 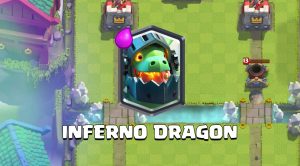 Use on large pushes to make your opponents cry! 6 elixir is a lot so you need to know when to start cycling rockets. I would say when the tower gets to 1000 HP or if you are struggling with tower damage just cycle rockets. That’s the beauty of this deck. The rocket is just so valuable in defense in clutch moments.

Goblin Gang in the back, Goblin Barrel on the tower, Ice Spirit in the back

You want to play this deck not too aggressively. Bait out their spells with Goblin Barrel, for example, and just keep chipping away at their tower. Most zap/log bait decks are actually considered siege because you’re getting at their tower from far away, with spells. Yes, guys, GOBLIN BARREL IS A SPELL! Don’t try to play aggressive and don’t rocket the tower unless you can get good value out of it, for example if you hit an elixir pump. You need the damage from the Goblin Barrel though so play smart and bait spells so you can maximize damage in a shorter amount of time. This deck does decently well against beatdown so if you can, punish with Goblin Barrel. This is not a beatdown deck obviously so you really should only be using Sparky as a reactive card. Some games you won’t even need to play Sparky.

Around mid-game hopefully you will have wanted to get the tower down to around half health so you can get ready to rocket cycle. Because it’s double elixir, you gain elixir quickly so it’s fine to just go all out to rocket cycle. This deck is meant to be for 1-0 wins so if you’re looking to farm crowns this isn’t really the deck for you.

Around OT, if the game goes to OT, spam Goblin Barrels and Rocket when you can, and go for the trick barrel! If you don’t know what that checks this video out:

Spamming Barrels and Rockets might sound stupid and noobish but remember you’re getting elixir so quickly that you can easily cycle back really quickly, unlike 1x elixir time where if you rocket at 6 elixirs you can get easily punished. Don’t overcommit in 2x elixir time though just because I said to keep playing Rocket/Barrel because remember your opponent is getting elixir at the same speed as you! GG!

Sparky does very well against big Hog pushes with Ice Golem and Musketeer and whatnot, especially with the fast reload times, and Goblin Gang is also an efficient counter. Shouldn’t be too hard, just watch out for E-wiz variants. Since the E-wiz got nerfed he might see a decrease in usage which makes your Sparky and Inferno Dragon even better and more efficient!

Rocket the pumps so they don’t gain an elixir advantage and use Sparky/Inferno Dragon to wreck their massive pushes! You could use Sparky to distract and Inferno Tower to kill or vice versa. Either way, Sparky is an MVP and can kill Golem in just 4-5 hits, which is very impressive! It’s hard for the Golem user to keep up the cycle so keep hitting at it. Lightning might be trouble here though, space out your Sparky/Inferno Dragon on defense.

There are different kinds of PEKKA decks but a lot of them contain Bandit, E-Wiz, Hog/Miner, almost inevitably Lightning, and/or Poison. It will be pretty difficult for your Inferno Dragon to work well, and your sparky might get distracted by dashing bandits or whatnot! Your goblin gang will help a lot in the PEKKA lightning variants, distracting support troops too. Rocket cycling will help a lot because they have efficient counters to Goblin Barrel like E-Wiz, and also get value off Rockets against clumped-up offensive troops.

Just distract the siege weapon with Ice Golem and kill with Goblin Gang/Bats. It’s so easy. Sparky is also a hard counter to their decks as Sparky kills the siege weapon and the troops used by the opponent to protect their X-Bow/Mortar. And even if they have Log/Arrows/Zap you can bait them out with Goblin Gang/Bats. You can also rocket the X-Bow in single elixir. Don’t rocket the Mortar though as you don’t want to get an elixir disadvantage!

Goblin Gang and Bats again work nicely. Sparky might not be needed in this matchup, unless they have a big 2x elixir push. Just watch out for Poison, which is common, so try to bait out their poison first so one of those swarms can counter the miner with minimal damage.

Rocket the pump, and even if they punish with 3M you can counter the 2 muskets with Sparky nicely and go on the counterpush with Goblin Barrel. They might have Battle Ram, so Goblin Gang works well for that. You will keep up with the cycle so just keep sending out Barrels.

They might have a Giant Miner deck with Poison or one with Minions/Minion Horde. You should always watch out for Poison/Lightning so remember to place your Inferno Dragon/Sparky so they can’t get targeted by these two spells. Lightning got a radius to nerf so that will be to your advantage.

That’s it, guys! Hope you went through this guide. Very long! Video from Nebula Noodle, and stay tuned for my next guide, which I hope to publish shortly!