Hey! Nitrome95 here coming at you with a grand challenge winning X-Bow deck.

Unlike the X-Bow cycle deck just posted, this deck works at all skill levels at the game, allowing me to reach Challenger 2 as a fairly new lvl 11. So let’s get into the deck!

(Btw, I give full props to my clanmate, Bouwhouse, for making this deck) 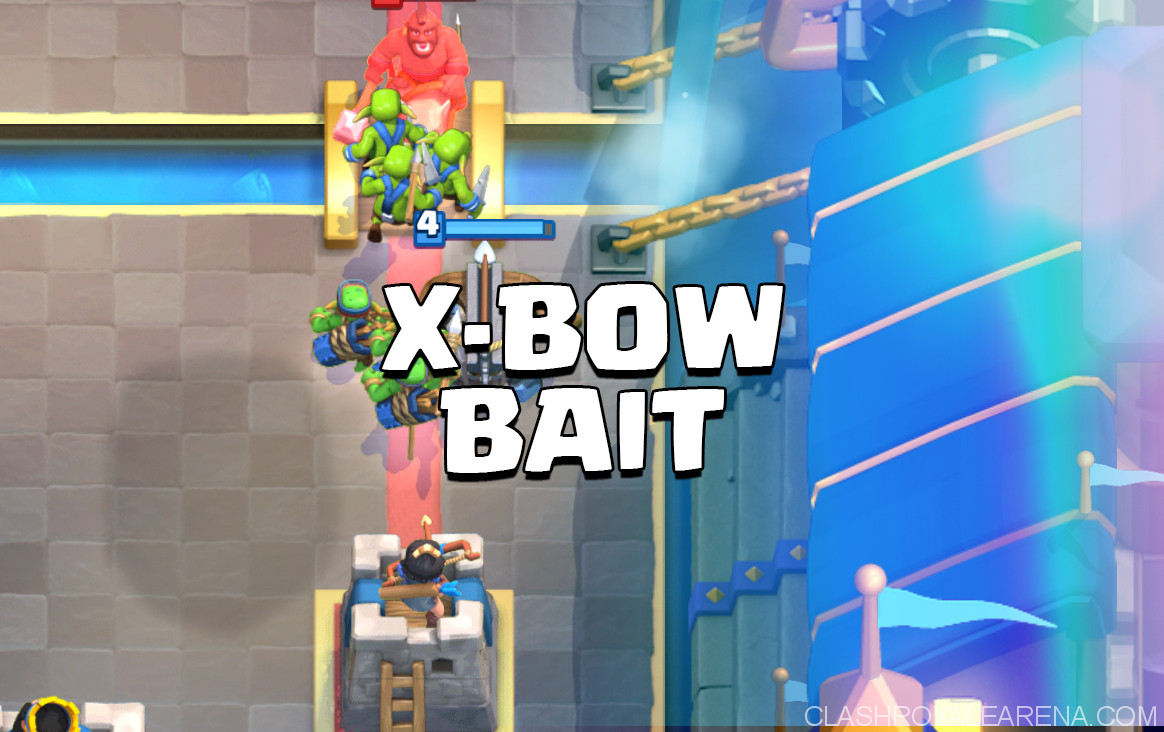 Before I start the guide, I want to say that if you see me in a battle, say “Good Game” 3 times and “Thanks” so that I know that you are from Clash Royale Arena. I just think that it makes the battle more fun.

Your sole win condition. By itself, it can easily solo a tower if left alone.

To get the X-Bow locked on to the tower, you have to read your opponent’s counters to your X-Bow.

It is sometimes used as a defensive building if you are trying to outcycle your opponent’s tank (especially Royal Giant) that will hard counter your X-Bow.

On defense, this card is also decent against graveyard because it has a high hit speed.

This card is also good to punish if your opponent plays a tank in the back, but just make sure that you will have enough Elixir to defend.

This card is the backbone of this deck, as it allows you to have a fluid cycle that feels like you are playing a 3.3 Elixir deck.

When playing with the Elixir Collector, you always have to be evaluating risk and reward of placing this card down.

On one hand, Elixir Collectors give you a 2 Elixir advantage. On the other hand, your opponent can easily punish you with a quick push, leaving your defenses useless. This requires you to know your opponent’s Elixir and whether they have a punish card in their hand.

In 1* Elixir, if you know your opponent has 3 or more counters to your X-Bow, be patient and constantly pump up. Counters to X-Bow are usually a card with high HP, and high DPS or/and range. The only stupid exception is high damage spells like Rocket and high HP spawners. If you can get 3 pumps down before 2* Elixir, plus defend fairly well, giving you an extra Elixir, you are at a 7 Elixir advantage. No matter how many counters they have, they can’t counter your X-Bow.

These cards are used almost interchangeably, except Goblin Gang can hit air and Skeleton Army has more DPS.

Both cards are used to bait out your opponent’s spells and to punish when your opponent doesn’t have a spell in his hand.

When you get the perfect moment where your opponent can’t counter the Minion Horde, USE IT! It gets crazy value if used correctly, but can put you 5 Elixir behind if used incorrectly.

Generally, this time is when you are defending against your X-Bow and they don’t have a spell in their hand.

Usually, your opponent won’t use any splash that can hit air against your X-Bow (unless it is executioner), so you are free to use it.

If you are extra confident that your opponent doesn’t have a response to your Minion Horde, you can use it on defense and counterpush with it on offense. I have saved games because my Minion Horde gives me a 5 Elixir advantage!

This card is almost a given in siege decks. It buys time for your X-Bow to survive so that you can plan out your counter. It also helps to counter minions and solo medium troops with the help of the tower.

WOAH WOAH WOAH. Yup, I’m using Zap not Log. It gives you more flexibility defending against air. Log doesn’t fit as well because it doesn’t have the instant deploy time that can come clutch for your X-Bow.

A more expensive Zap. Almost always, I make sure that the spawn Zap gives me value so that I have already gained 2 Elixir that I lost by spawning the troop. This card comes in handy in retargeting troops off your X-Bow and on to your Ice Golem.

Your best starting hand is the Elixir because it forces your opponent to make the first move and allows you to start getting an Elixir advantage from the very beginning. If you are confident with your hand that you can defend your X-Bow, go for the surprise X-Bow. If not, you can place the X-Bow defensively to put your opponent in an awkward situation. Another good opening is a Goblin Gang at the bridge that will get some extra chip damage if your opponent isn’t prepared.

If your opponent can’t counter your X-Bow, play aggressively and take the early tower. Then defend by luring out your opponent’s spells and punishing it.

If you can’t get past your opponent’s defenses, pump up and try to build a huge Elixir lead.

With this deck, it is the hybrid of all hybrids. It is siege, bait, control, and beatdown at the same time. Let me explain:

This is the most obvious one. This deck uses the X-Bow to shoot from your side of the map to the opponent’s. This means that you will have to predict what your opponent will play to counter your X-Bow. If they will play something that charges, get ready with the Electro Wizard. If they play a tank, get ready with one of your high DPS troops. If they only play ground targeting troops, play the Minion Horde.

You have three spell bait cards: Skeleton Army, Minion Horde, and Goblin Gang. Since this is a spell bait deck, you will want to bait out your opponent’s spells and take advantage of that by using either Skeleton Army, Minion Horde, and Goblin Gang. By baiting out their spells, you can defend well. With their high DPS, they can easily clear the board for your X-Bow to lock on the tower.

If your opponent is playing a deck that can’t counter your X-Bow, you want to take advantage of their weak defense when they don’t have as much Elixir in 1* time. This allows you to take the early tower and play strong defense.

If your opponent has a lot of counters to your X-Bow, play defensive and keep using your Elixir Collector. When you find an opening, that’s when you attack and hopefully take the tower.

As coined by KairosTime gaming, turtling is a defensive placement of your X-Bow that forces your opponent to make a move. Do this by doing a 4-3 building plant. Some uses include

(Note: This video is pre update so not all of the matchups are as relevant today.)

If you want timestamps, go to the description of the video.

Surprisingly, this deck doesn’t do badly against this big guy. You want to keep the X-Bow a surprise, building Elixir Collectors until you find that your opponent doesn’t have his Royal Giant in his hand. From this surprise attack, you should be able to get 1000 or so damage. From there, place the X-Bow in between your towers in the opposite lane of where you anticipate the Royal Giant to be. If done correctly, a preplanted X-Bow will lure the Royal Giant in range of the tower. From there, keep looking for openings to take the tower.

This one is slightly tricky because the giant hard counters the X-Bow for only 5 Elixir. Same as the Royal Giant, play defensive X-Bows and look for an opening.

Surprisingly, this matchup isn’t that hard. Whenever you play an X-Bow and they Rocket, your X-Bow will do some chip to the tower. If they block the chip, they are defending with a negative Elixir trade. Take advantage of both scenarios to win the game.

Even post patch, this deck is so great because it can stand the test of time. None of the cards (besides Electro Wizard) are particularly op, so hopefully this deck will still work for balance changes to come.

The main thing that you have to remember with this deck is to adapt your X-Bow pushes based on your opponent’s counters.

Seriously Will? I spent 3.5 hours on that mortar spell bait deck just to have it rejected :/. F*** u man. :D. Guess we’re even. (I’m not mad or anything, just venting)

What did you just say? – Will