Immortal X-Bow Deck That Got Me To Master League! – Clash Royale Arena

Hello guys, Trainer Rain™ from EN Octans here and I will be talking about my favorite X-bow deck that stays consistent throughout the meta.

I have gotten to 4923 with this deck and I hope to help you push up as high as you can. X-Bow is a great choice because it is a defensive heavy deck and can sometimes force your opponent to spend extra elixir when trying to shut it down.

On ladder, or 1v1, you tend to matchup against higher level opponents and it can be a struggle if your cards are a fairly low level because the high level of the arena tower can easily shut down the pushes that you make.

With X-bow, a card that stays on your side of the map, this is not an issue because the x-bow whittles away at the tower safely without getting targeted. 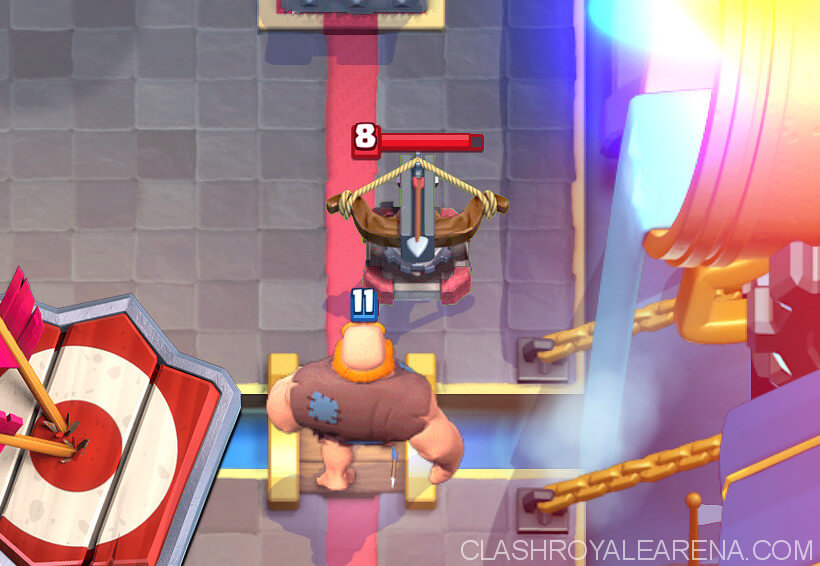 The win condition of the deck (obviously).

As long as it is a decent level for the trophy range that you are in, the X-bow shouldn’t die out too fast!

With Mega Knight, P.E.K.K.A, Golem, and Lavahound extremely popular in any meta, this building takes care of those huge tanks like a breeze!

This cheap 2 elixir spell is very versatile especially against Goblin Gang and Goblin Barrel being used a lot.

The unique push-back effect is also helpful when you are trying to keep off any troop from shutting down the x-bow.

The Knight is a great mini tank when paired up with the X-bow because it is so cheap and easy to cycle and his hitpoints is just so worth it for 3 elixir.

The Knight does a better job than the Ice Golem because it attacks instead of just chasing a building.

Paired up with the Knight, it can snipe away tanky troops and counters squishy troops like Goblins, Minions, and even the Skeleton Army exceptionally well.

Archers will help defend the X-Bow from air troops as one of the only 2 cards that can hit air in this deck.

The Ice Spirit is only 1 Elixir, which is key because it can help you cycle out through a bad hand,  back to the X-Bow more easily, or out-cycle your opponent’s counters to the X-Bow.

It synergizes well with Archers as well when up against a Valkyrie, Lumberjack, Minion Horde, or a Knight.

The Fireball is a very useful in any X-Bow deck because it can quickly shut down high DPS units like Musketeer, The Witch, and Minion Horde.

The Fireball is also important when you have done enough damage to spell cycle the Tower down to win the game.

The Electro Wizard is the second Legendary in this deck and does so much because of this defensive based deck.

With the spawn damage of the Electro Wizard, it can really come in clutch when defending your X-Bow and your Tower from Minions, Archers, or Goblins.

If you are somewhat fresh into the game or still don’t have these 2 Legendaries unlocked, then I would suggest bringing Zap for the Log and Mega Minion for the Electro Wizard.

The Zap can still provide a similar damage output as the Log and also has a stun effect that is also similar to the Log.

The Mega Minion provides more damage than the Electro Wizard which can help out a lot on defense. 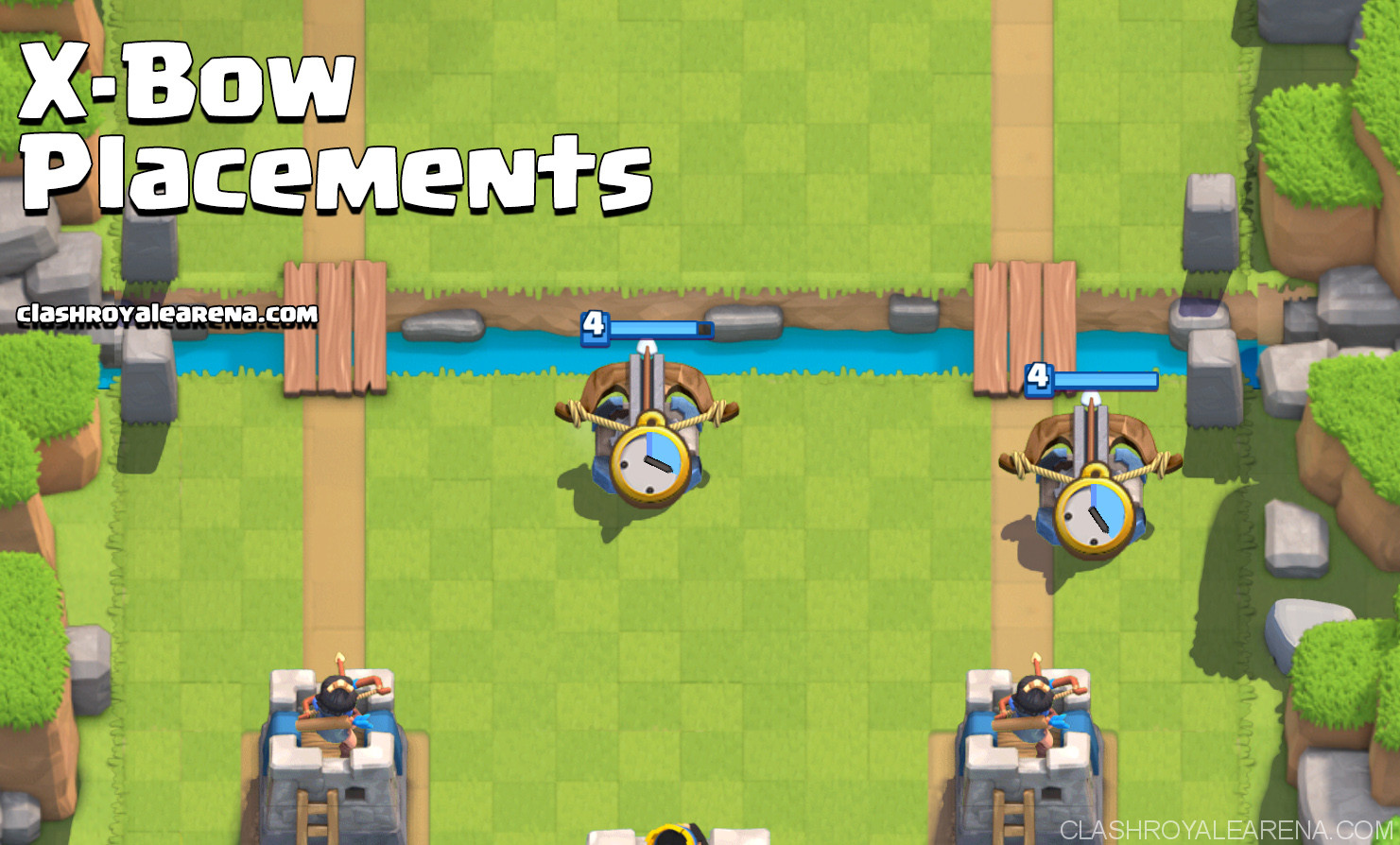 Now that you know what the cards are and how the cards of the deck works, I will provide some general tips and some matchups.

Never Overcommit on your 1st X-Bow

Overcommitting on your first X-Bow can easily lead you to 0 Elixir, getting your Tower destroyed within the first minute.

This can definitely ruin the game because with X-Bow, you want the game to only go to 1 Tower only.

Know when to stop defending the X-Bow

Defending the X-Bow is the only way that you will ever get any Tower damage but there are times you should stop defending it and save up for defending your own Tower.

Typically you always want to put something to help attack the opponent’s troops but you should think about backing off whenever you see a tank like a P.E.K.K.A  or a Mega Knight placed right on your Tower.

This is because they can easily destroy anything you place.

Instead, either try to pull it around with the Knight or the Archers or use the Inferno Tower to help shut it down.

You never want to be down more Elixir than you need to be.

Placing the X-Bow is 6 Elixir itself and placing more troops that might do nothing can make your Elixir bar drop even further.

How to start the game?

You never want to start off with just an X-Bow because if your opponents have a Golem or a P.E.K.K.A then you would be down a lot of Elixir. Then, your opponents can just add more troops after killing the X-Bow to take down your Tower.

A better way to start off the game would be to cycle cards like the Knight, Archers, or Ice Spirit in the back so you can play the X-Bow immediately when your opponents drop the big tanks at the back.

Know when to punish/play aggressively

Knowing when to punish with such a deadly card like the X-Bow can be the deciding factor between winning and losing.

A great example of this is when your opponent places a Giant down in the back of his king Tower.

Normally, you would think of placing troops on the same side and try to defend the Giant; but with X-Bow it is much more different.

The best way to punish is to drop the X-Bow down on the opposite lane whenever they start off with that tank at the back.

This way, you can force your opponent to

I do recommend going more aggressive with the X-Bow if this happens because you always have that Inferno Tower to lean on.

That being said, make sure you have enough Elixir to play the Inferno Tower or else you might trade towers, which again, is very bad for X-Bow users.

Punishing can often lead to throwing your opponent off, spending extra Elixir they needed for a push and end up dying out.

Knowing how to use your 2 spells

This generally isn’t a huge issue but it is a good thing to know.

You normally want to save your Log/Zap for the low-HP card(s) that deal the most damage.

For example, if your opponent is running a Goblin Gang and Goblin Barrel, you should probably save the Log/Zap for the Barrel because it is directly on the Tower and can deal massive damage. Meanwhile, if you are facing the Goblin Gang, you can use other cards like the Archers or Knight to prevent any damage.

The Fireball is also very important to know how to use. You are going to use this spell on different things depending on the matchup.

In one game you might use the Fireball primarily on a Mega Minion but if you are about to do that and your opponent has 3 Musketeers, they can easily overrun you if you are caught without the Fireball.

Knowing when to go for the win and when to play for a draw.

The last thing I want to cover is knowing when you should switch between going from all out aggressive to a more defensive relaxed game.

Being a good X-Bow player requires you to foresee the game and know that sometimes, you should just play it out for a draw instead of trying to go for a win and end up losing.

If you have a bad deck matchup against an opponent it wouldn’t be the worst thing to play a defensive X-Bow so you have that extra layer of defense.

A good example of this would be if you are playing against a Royal Giant.

If you play the X-Bow at the bridge, the Royal Giant can easily snipe away at the X-Bow while tanking all of the damage.

However, if you play a defensive X-Bow, you would have the X-Bow, your Tower(s) and additional troops to help shut the Royal Giant down.

If your opponent over commits and you feel confident that you can punish well, then go for it; but 9 out of 10 times, the game will usually end out in a draw.

Going for the win is also a key thing to learn while playing this deck.

If the Tower you are going for is around 1000 HP or lower, place that X-Bow in the center for defense and try to cycle Fireballs onto the Tower.

Be careful not to spend too much Elixir or else you will lose the game.

If you are not comfortable with playing that defensive X-Bow, just cycle cards in the back on whatever side your opponent is going for and try to get those fireballs in once it is Double Elixir.

These are pretty much all of the basics to playing this X-Bow deck.

A few last things to note is to always try to adapt based on whatever type of deck you are facing! Always save up Elixir whenever you go for a push, and don’t be afraid to use your spells when finishing off a Tower.

With this low average Elixir cost deck, you should be able to defend and set up another push very quickly.

Lastly, remember that you should practice the deck a lot before giving up on it, X-Bow does take a lot of skill despite many people saying otherwise.

I hope that this deck does you well and helps you push up to a new personal best!!  I wish you all the best of luck in the arena and most importantly have fun! 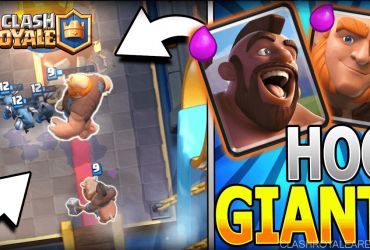 Hey guys. SuyogThePun here with an arena deck which absolutely crushes at the level which you can play it at. Without any further ado. Let’s get right into the deck. … 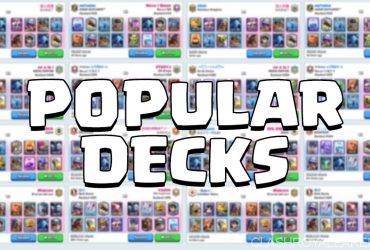 Hi, I’m the InvincibleDabber7 and I want to share some of the most popular decks in the current meta. The statistics are based on Woody’s Popularity Snapshot, a list compiling …