Okay, it’s me, Hi People MC (email me at hipeoplemc@gmail.com) back at it with another article. However, this one is different from anything anyone on Clash Royale Arena has ever done. This is an article for The biggest problem in Clash Royale, what Supercell can do to help, what they can’t, and what you can do to help out this great game (and get more people to reach level 13 Royal GGs) and save Supercell’s best creation yet! YouTubers Switching to Fortnite:
Many YouTubers that used to do Clash Royale decided to switch to doing Fortnite videos. I find this very rude because these YouTubers like Imperial and Eclipse seem to not care at all about their viewers, just about how many views they get.  If they cared, they’d at least be like Havoc Gaming and make some Clash videos while making Fortnite videos as well. These people don’t seem to care about anybody except for themselves. Even a YouTuber named Clash LOL decided it would be fine to make Fortnite funny moment video sections after every single new Clash Royale funny moment compilation, and his YouTube name was CLASH LOL, NOT FORTNITE LOL. In fact, he changed his YT name to LuL Gaming to stop the people from telling him to post more Clash content.

Supercell Needs More Card Ideas:
Supercell is recently wiping a rag across many Clash fans putting up horrible card ideas. Supercell made it obvious when they released the Flying Machine. Just throw some wings on a Musketeer and lower its HP a bit and call it a Flying Machine. For example, maybe a self-regenerating troop or a Legendary building. And, seriously, has Supercell never thought of a Bat Cave/Spawner or a Minion Spawner? They never said anything about ruling those out.

Unbalanced Cards:
Even though Supercell needs better new card ideas, many current cards are unbalanced, and even though Supercell might hate defensive gameplay, making cards like the Bomb Tower and Barbarian Hut obsolete don’t work for a well-balanced game. For example, the Bomb Tower, at tournament levels, if it was also buffed to attack air, couldn’t even one-shot MINIONS. The Bomb Tower is an extremely expensive counter to Skeletons, Goblins, and Barbarians. Other things include that the Hunter is generally overlooked. Maybe someone might use a P.E.K.K.A to get the same melee damage or might use a spell to get the AoE damage. Perhaps buff the Barb Hut to spawn Barbarians more often and buff the Bomb Tower to deal damage to air troops and deal enough damage to one-shot Minions. And, as some people on the 2v2 chat say, NERF THE ROYAL GIANT!

Bad 2v2 Teammates:
Sometimes (many times in a row for me occasionally), we get those 2v2 teammates that leave mid-game. They’re probably not trying to grief you, probably just their mom or they have to rush to do something. We shouldn’t punish them for something they can’t control. But a way to fix this could be to double, or even triple the elixir that the remaining player earns, to make up for the teammate leaving. But also, perhaps reward the single player with two chests, if their chest slots can hold it since they had to do a 1v2 battle.

Bad Matchmaking:
One of the reasons people are quitting is because of small annoying things about the game accumulating. One of the main things is getting bad matchups. For example, I get a lot of matchups with people that have a level “13” rares and level “12” epics, and I don’t even have any rares or epics at those levels (not even Skarmy)! I can’t pass this barrier of overleveling cards on my opponent’s side, and neither can many people (unless you turn out to be Yarn from Orange Juice and know your Elixir Collector placements perfectly and how to counter Royal… not GG.) figure out how to win. What We Can Do To Fix These Problems

For YouTubers switching to Fortnite, we can’t do much except for stop watching them and watch Clash Royale videos more. This will cause the Fortnite people to return to Clash so they can continue raking in views. Alternatively, you can hope (or pray) that Fortnite will turn out like Pokemon GO and people will just completely stop playing it in a few months, and people will return to a more dependable game, like Clash Royale. (Note: I found out that Fortnite existed since 2012, which means it took a while for it to become famous, so it might die as soon as Battle Royale becomes repetitive for many people that can’t get anywhere in Battle Royale, aka me) With Supercell needing more card ideas, we can send them in through social media, and if we’re lucky, Supercell might see yours and decide it’s a well-balanced and fun card to use. When it comes to unbalanced cards, we can’t do much except for having many people ask Supercell to buff cards and nerf the arena seven common cards. For bad 2v2 teammates, we can’t do anything. Supercell will hopefully notice that many 2v2 teammates aren’t playing well and that when they leave, they should multiply the elixir generation of the person on the one player side. When it comes to bad matchmaking, Supercell should make it so that the matchmaking system would not only factor in trophies but also card levels and king level. We can’t solve most of these problems, but the ones we can solve are the most important ones. The other issues are that Supercell also has to work on other games, and they can’t focus all their time on Clan Wars or making new chests or reWARds (puns yay). The thing is, Supercell doesn’t seem to realize that their best game right now is Clash Royale and that Clash of Clans and Boom Beach are both dead for now, and Brawl Stars isn’t available in the U.S., so any chance of that game being big is 0, at least until they release it in the U.S. So really, Supercell shouldn’t be trying to revive their old games and they should continue working on Clash Royale. What we have to do is get that message to them, to either work more on Clash or release Brawl Stars to the United States.

Conclusion (Check out articles I’m working on at https://drive.google.com/drive/folders/0B2-y6D9Rh3gKWTJLSHJkcXVSWEE)

Overall, I feel Clash Royale will continue to be alive for quite a while (especially considering the cancel button is still quite a joke), and we can either just enjoy the game while it lasts, or we can revive it (give it a med kit, in Fortnite language, or give it a Heal spell, in Clash language) and keep this great game going for longer! We can tell the YouTubers to continue Clashing, we can tell Supercell to make the game better. Without our small amount of people on this tiny website helping out this (insert name of a 5 elixir rare unlocked from Training Camp here) game, we might have game become as large as a Skeleton, and with us, we can instead turn it as large as the Arena! We are now Clash Royale’s only hope. Without us, what will Supercell do? 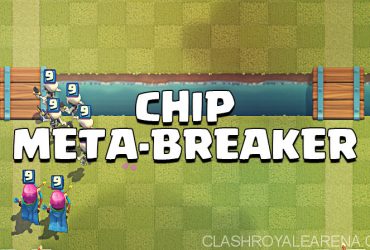 It’s me Zigge here with my Chip Meta-Breaker Deck for you guys! This is the fifth and final guide of the CRA Birthday Special! Counter Giant and Elite Barbarians with … 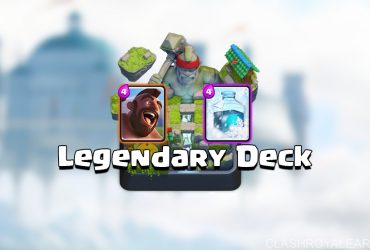 Hello guys, today I am going to show you a new stunning Arena 8 Deck which contains only cards from Arena 4 and below. Sounds great? Also, it contains one of …
Posting....