Hey guys! It’s Scarlett here, and I’m going to submit my very first deck! I created this deck when I was in Spell Valley, and I didn’t see potential in it until it took me to Frozen Peak as a level 7. It works well from Arena 5 to Arena 8, being able to counter some of the popular decks seen these days. 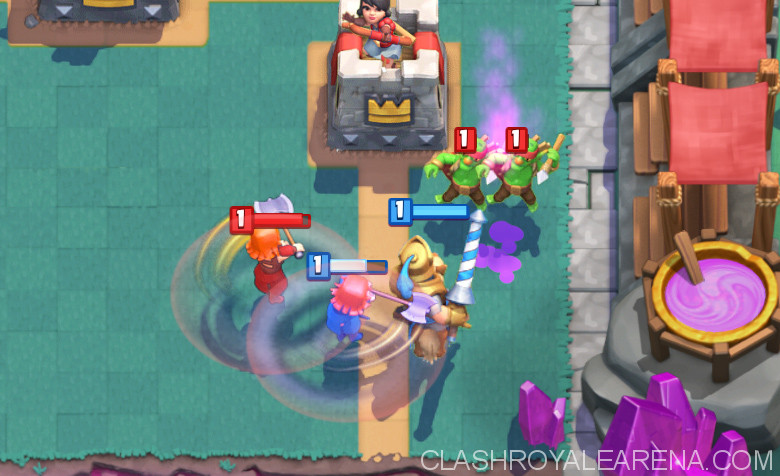 This deck only includes cards found in Training Camp, Goblin Stadium, and Spell Valley. It consists only of Common, Rare, and Epic cards, so almost everyone has the cards to make it.

This Valkyrie-Prince deck plays well against quite a few Giant or Hog decks, but may fail to counter entirely air decks.

The average elixir cost of this deck is 3.4, so it’s not too expensive, yet it has quite decent defensive and offensive cards.

Valkyrie- Valkyrie is an incredible defense card, having a 360 degrees splash damage. She works well against small troops as well as cards like the Musketeer, Witch, Wizard, and Three Musketeers if used correctly. She can also tank well with her moderate-high health and is one of the only qualified ground-troop tanks that cannot be killed by a Skeleton Army. (Combos including the Valkyrie: Valkyrie + Archers, Valkyrie + Mini P.E.K.K.A + Fire Spirits)

Prince- Prince will be the main offense card in this deck. Having both decent health and damage, he can easily devastate or even take down of Tower if unstopped. Many people have stopped using the Prince as they advance into higher arenas, but it still works well in Frozen Peak. The Prince can also be used as a defense card, however only against certain cards. He defends well against a bowler, because he does not get affected by the knockback, and he can also defend against a Hog rider. (Combos including the Prince: Prince + Valkyrie, Prince + Mini P.E.K.K.A + Zap, Prince + Musketeer + Fire Spirits)

Musketeer- The Musketeer is a very strong card against air troops like the Baby Dragon, Mega Minion, and Minion Horde. I also love placing her in front of the middle of the river to destroy Furnaces, Tombstones, or Cannons. The Musketeer is useful against a Valkyrie or a Mini P.E.K.K.A if you place it next to the Tower. With the combined power of her Musket and the Tower’s arrows, you can snipe both targets before they even touch the Tower and you still have a Musketeer. (A great combo for defense is the Musketeer + Archers)

Fire Spirits- Fire spirits are an amazing card to include in your deck. It almost always gives you an elixir advantage, being able to take down Minion Horde, Goblin Barrel and Skeleton Army. And because of the recent nerf of the Zap, Fire Spirits are now useful in taking out Goblins. Fire Spirits also work well in offense when placed with the Prince or Mini P.E.K.K.A in the deck, because it is able to protect them from groups of small troops and if not defended, deal a great amount of damage to the crown Tower. (Combos including the Fire Spirits: Fire Spirits + Prince, Fire Spirits + Mini P.E.K.K.A)

Archers: Using the Archers in defense is a great way to take out the Skeleton Army, Musketeer, Witch, and some other melee cards. Archers can also easily take out an Inferno Dragon and the Ice Wizard. If tanked for, they can also inflict a high amount of damage to the crown Towers. Archers could be used for chip damage, however it is not prefered because then you are vulnerable to certain offensive cards. (Combo including the Archers: Archers + Prince)

Zap: The Zap is a very easy card to use in the deck. You can use it against a Skeleton Army if the opponent is trying to defend against your Prince. You can also use the Zap as a defense card against minions, Spear Goblins, Goblins, etc. The Zap’s stunning effect is also useful against the Sparky or Inferno Dragon. Try not to us the Zap in offense unless it is worth the damage on the Tower or if the Zap will prevent your offense cards from being countered with an elixir disadvantage. (Combo including the Zap: Prince + Zap, Mini P.E.K.K.A + Zap)

How to use this deck:

When you discover your opponent’s weaknesses and the cards they have, start pushing using the offense cards, such as the Prince. A very simple push to use in this deck is the Valkyrie tanking for the Prince. It can be countered if the opponent places a Skeleton Army away from the Valkyrie. It can also be countered by a minion horde or an Inferno Tower. Though this push can be countered by certain cards, it is still very useful and will usually be a threat to the opponent’s crown Towers. Knowing what offensive cards your opponent has is also a very important thing to keep in mind. If you know the opponent has Elite Barbarians, you might want to keep your Valkyrie or Skeleton Army in your hand just in case.

Don’t forget about the cards that the opponent may have in their hand at the moment. If the opponent just used their Skeleton Army, you can throw in your Prince as a surprise, but only do this if you have enough elixir. This also goes the other way around, so if you know your opponent has a Skeleton Army in hand, do not use your Prince unless you have a Zap ready.

If you are currently winning by one Tower to zero, try to stall the rest of the game by defending. If you believe you have potential to take a second Tower, then you may, but it is prefered to defend just in case the opponent comes around with a strong counter push.

For defending, you can always use the Musketeer or Archers in accompaniment with the Tower to “snipe” minor tanks. The Valkyrie is also a very useful defense card against big masses of troops or ranged attackers.This deck has quite a few defensive cards, so in the beginning of the game, try to figure out your opponent’s deck and strategy.

If the opponent pushes with a Giant and a few troops behind it, the best way to defend against it with this deck is to get rid of the supporting troops first, and then to finish off the Giant. For example, a common push people use is Giant + Witch. You can first place a Valkyrie in the back to get rid of the supporting troop, in which this case is the Witch, and then use a Skeleton Army or Mini P.E.K.K.A to take out the Giant.

Against Giant and poison, it is smart to defend it with a Mini P.E.K.K.A and a Prince. Though it seems weird to defend with these offensive cards, they still do high damage and can resist the power of the poison. You also get a good counter push after defending the Giant.

When you are unsure how to defend against certain pushes, always split the troops in the push into sections in your mind, so it will be easier to take out the troops one by one.

You may use this deck if you are in Arena 5-8, and be sure never to have 0 elixir.

Try not to over-defend cards or over-push so that you won’t run out of elixir.

Don’t use a defense card for offense if it will make you vulnerable to a certain card.

Using this deck shouldn’t need too much skill if you follow my tips, as most of it is common knowledge.

I hope this deck will help you gain some trophies!

Keep calm and clash on!