Hey Guys! It’s lightningmaster823 here and today I will be showing you guys my personal opinion on the top 15 most underrated cards in the game right now! 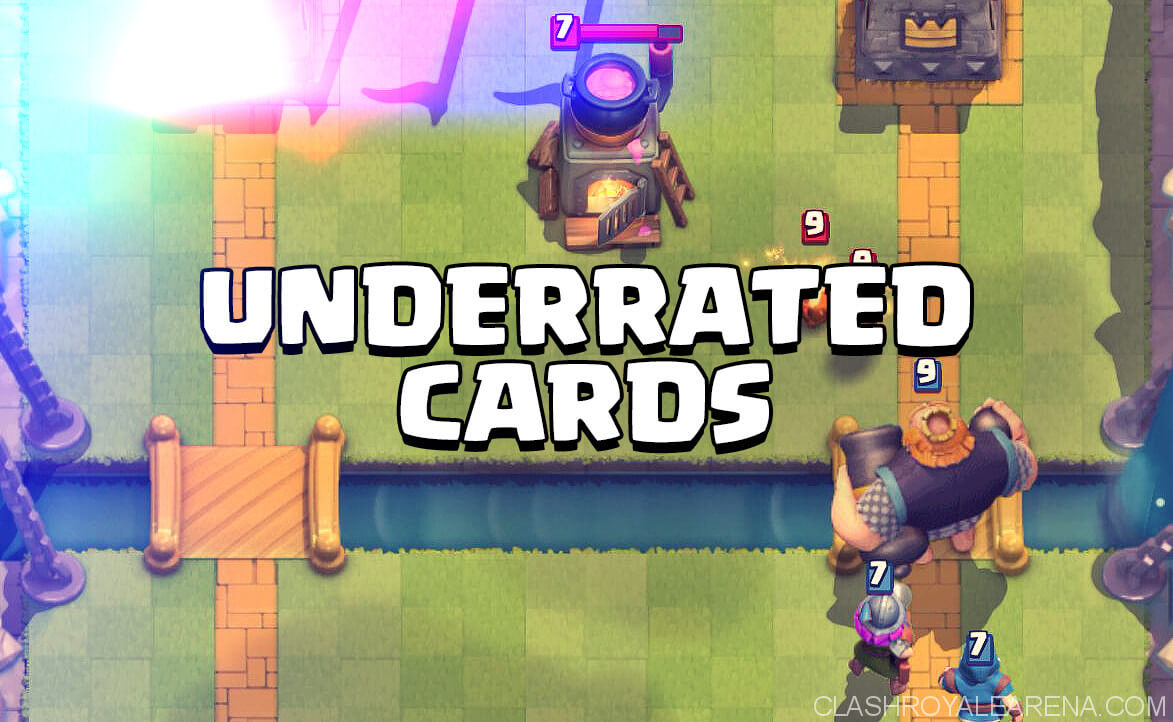 *Note: The cards on this list are not in any specific order; therefore, the card at #3 can be just as underrated as #8.

After the Elixir Collector got an increase in elixir cost (from 5 to 6) about a year ago, it went from being in practically every deck to being in virtually none.

It did get buffs like the elixir production rate was increased, but the main reason it is underrated is because of its high elixir cost. This made it very risky to play as even if you have it down, your opponent can just simply pressure you and then the elixir produced was basically a waste and now you would be at least 6 elixir behind.

However, it can force your opponent to make their first move. Ignoring Elixir Pump is also very dangerous as the opponent may get a significant elixir advantage out of it and overwhelm the opponent.

To be honest, I don’t think this card should be buffed, it has seen usage in many Golem decks, and with Mega Knight out as well, the Elixir Collector is seeing more love, especially with Mega P.E.K.K.A being everywhere.

The Goblin Hut was seen in the first deck type that was considered to be “cancer”, and that was Spawner Decks or Hut Spam Decks, it is still sometimes seen today, but most Hut spam Decks are seen in around Arenas 3 and 4.

Goblin Hut was underrated as it is completely overshadowed by the Furnace, with Furnace having a lower elixir cost, splash damage, and deals better damage, however, it provides pressure and it is more level-independent compared to Furnace, so if you’re an underleveled player like me, Goblin Hut would probably be a better option.

For more tips about this building, please take a look at here!

I personally think Goblin Hut should have its cost reduced to 4 elixir to rival the Furnace more.

Bomb Tower is a great defense and all, but it is so overshadowed by Inferno Tower, Furnace, and even Tombstone.

Most players don’t play Bomb Tower as there is so little value for such a high elixir cost, but it can counter Elite Barbarians for a +1 trade, a Hog Rider + Ice Golem combo for a +1 trade, and it can even counter Hog + Valkyrie for a +3 trade.

Personally, I would buff the Bomb Tower by either:

Might be surprising that Ice Wizard is on here, but X-Bow has sort of shifted out of the meta due to the rise of Mega Knight and P.E.K.K.A. He is also still overshadowed by Electro Wizard (which makes me sad)

Despite being able to 1-shot Skeletons and Bats after the balance changes back in August, he took a hit with slower hit speed and his hit speed is only 0.1 seconds faster than that of E-wiz, and despite the fact that he is reliable against swarms, E-wiz can also do that with his Spawn Zap.

However, Ice Wizard is more reliable against medium swarms like Barbarians as he does splash damage with his normal attack while the E-wiz does not. He also has more HP and survives a Fireball 1 level higher than its relative level (lvl 1 Ice Wizard survives lvl 8 Fireball), unlike E-wiz. Ice Wizard is also only 3 elixir whereas E-wiz costs 4.

Personally, I would buff his HP so that he can tank 1 P.E.K.K.A shot; it’ll make sense as P.E.K.K.A is currently very popular.

Once one of the best cards, but now one of the worst, these guys may seem weak, but are pretty good, however, they are overshadowed by Archers, Goblin Gang, Dart Goblin, Minions, Electro Wizard, and even Ice Wizard.

Unlike their melee counterparts, Spear Goblins die to an equal-leveled Zap, but they easily distract troops, they also can provide some chip damage to the tower, that small amount of damage can possibly change the entire game.

I think their count should be increased as buffing their actual stats will also buff the Goblin Gang, but maybe their melee counterparts might die to Zap again after the next balance changes, we’ll have to see them never again.

Skeleton Army is a great card an all, but it is so overshadowed by Goblin Gang, despite having higher DPS than Goblin Gang, Goblin Gang has a small anti air option as well as being more resistant to Zap (as the Stab Goblins survive)

However, Skarmy tends to be better on defense as against a Hog; the Skarmy would prevent absolutely no damage (whereas with Goblin Gang, the Hog gets 1-2 swings depending on level). Skarmy is more reliable against Goblin Barrel and is better at pulling units.

I honestly think Skarmy should have 15-16 skeletons instead of 14.

Bomber has its benefits, but the fact that it can’t hit air units makes it a bit useless. However, it does do a great job against a lot of troops (including Elite Barbarians) with the help of a tank.

It can also deal a decent amount of damage to a tower; it will throw its bomb once before death if ignored and has enough health to tank 1 shot, which is 271 damage at tournament standard.

Overall, Bomber should maybe get its range buffed just a little

Lumberjack is good and all, but is currently overshadowed by Mini P.E.K.K.A.

When he started to popularize in Golem Decks back in late May, the Night Witch was released about 2 weeks later and she replaced him in practically every deck. Now that Night Witch is nerfed, now the Mini P.E.K.K.A is the challenge to overcome.

The Lumberjack can be useful as he drops a Rage upon death, which can help support pushes, even if something else is tanking, the Lumberjack can deal immense damage to the tower due to his 0.7 sec hit speed.

He is also reliable against certain swarms like Goblin Gang, whereas Mini P.E.K.K.A isn’t as reliable.

I honestly think his HP should get buffed so that he can tank one extra swing from Elite Barbarians.

Now we have the Mirror, this card has not been seen with much love as pretty much all Mirror gives is negative elixir trades, but sometimes, it’s worth it, like if I were to Zap a Skarmy or something and then a Goblin Barrel comes, then I can mirror the Zap AND be able to kill the Goblins as Mirror actually mirrors the card 1 level higher (lvl 4 Mirror gives lvl 10 Zap).

Mirror can also be used to psyche out your opponent, Mirror can work decently in Bait as if you send the Goblin Barrel and then your opponent counters with let’s say The Log, then you can Mirror the Barrel and deal some damage (unless they have other counters in rotation), plus you are also cycling your deck, not too bad.

I honestly think Mirror shouldn’t get buffed as it’s good as is. Just that people aren’t using it properly.

This is another card in the first deck type that was considered “cancer”, which was Hut Spam Decks.

Barbarian Hut is underrated as it is overshadowed by Furnace and Tombstone. Plus, being at a 7 elixir cost is quite expensive. However, it does have its uses, like keeping pressure in one lane and being a resource to getting an indirect elixir advantage, it also forces your opponent to make a first move.

On defense, it is actually pretty decent, the Barbarians that Spawn can attack the troops, and they do a decent amount of damage. The hut itself has quite a bit of HP.

Like many other cards, I don’t think this card should be buffed, it’s that it is not been used properly and a few control decks have it as well.

In fact, a friend of mine actually raged after getting Sparky from a gold chest, but after using her, he found out that Sparky is actually pretty good, especially with cards like Tornado.

With this, Sparky does not necessarily need buffs, you just need to know how to use her and then you’ll know that Sparky would be good as is.

Once popular, now underused, after the nerf in June, they spawn 3 skeletons again, it may seem like they’re useless, but they have potential for use, mainly for cycling purposes, but they still do well on defense despite Goblins being more popular as they contain more value for one more elixir.

Skeletons can still surround units well, as well as kiting units, but they need more precise timing for them to work now.

The changes I would make are that I would nerf Goblins so that they will die to an equal-levelled Zap again so that Skeletons and Guards can become interesting alternatives to Goblins.

Speaking of Guards, they are also here, they are good, but they are so overshadowed by Goblins, ever since Goblins could survive an equal-levelled Zap, the Guards’ usage dropped dramatically.

Guards have a shield that must be destroyed in order to kill them; even a Rocket can’t kill the Guards if they have their shields up.

Guards are excellent against Graveyard as they survive a bit longer compared to Goblins due to their shields enabling them to keep destroy the skeletons.

Clone has great synergy with cards like Golem, Balloon, Lava Hound, and best of all: Giant Skeleton, if your opponent attempts to rocket your push, you can make their Rocket a Chief Pat Rocket* by cloning the troops.

Clone is also a great pocket card, you can also use then on troops to bypass buildings, which Orange Juice refers to as “Clone Skipping”.

How can we forget this fella?

Giant Skeleton is really good when used properly, he is currently overshadowed by P.E.K.K.A, but Giant Skeleton is played just like P.E.K.K.A and Sparky use him on defense and then counterpush, as a bonus, if he dies in the process, the Giant Skeleton will drop a Bomb that can deal immense damage to the enemy troops.

*Chief Pat Rocket: A rocket that misses its target

Hope you enjoy my 6th article! You can use this guide as an advantage by using some of these cards, you’ll never know if your opponent will expect any of these cards!