This is definitely the one of the most interesting Clash Royale decks I have ever tried. Looks very stupid but trust me, it does work very well, especially at Arena 6 and 7! Moreover, in the recent Clash Royale update, Skeletons, Tombstone and Bomber all got buffs, which means a lot to this deck! 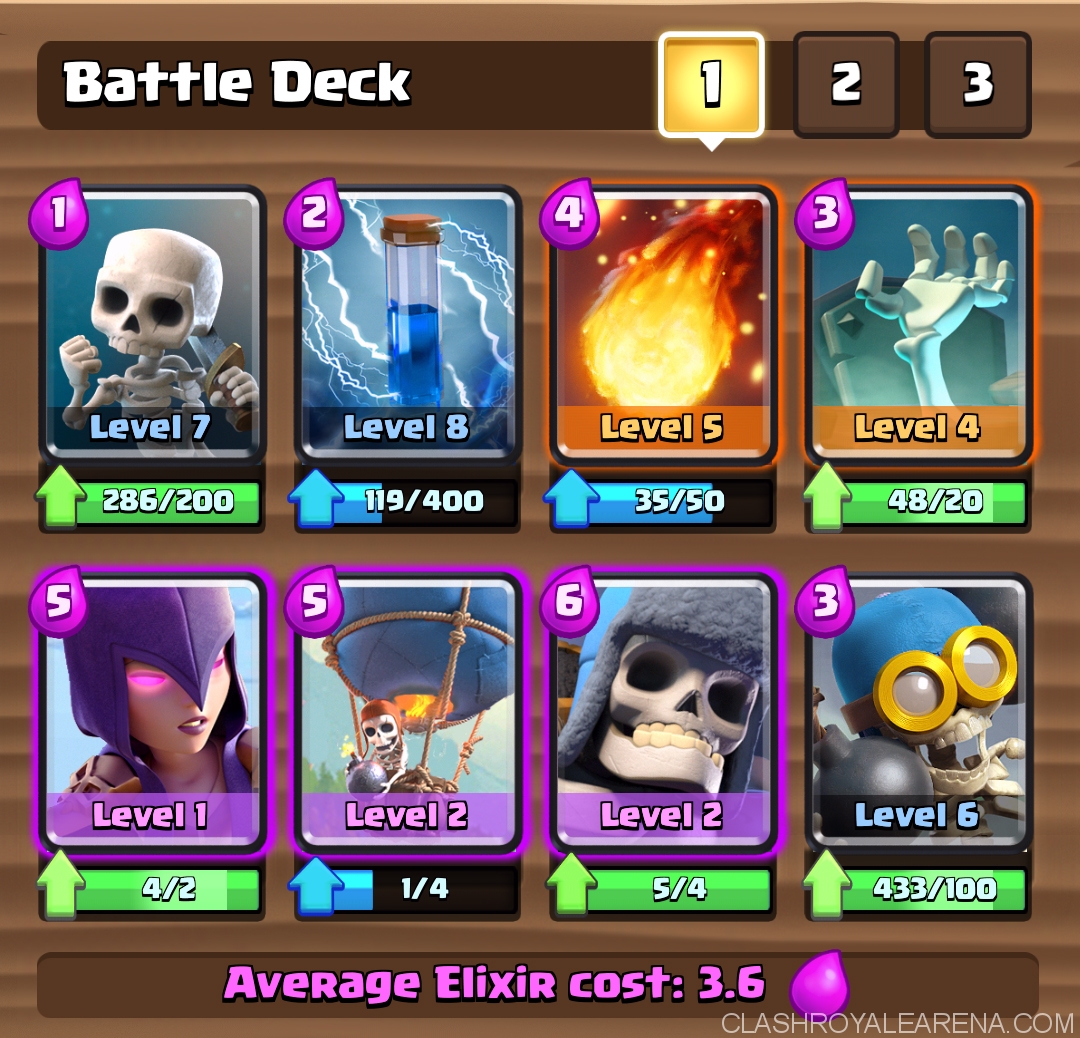 What the hell does this deck work?

Yea I know that this deck looks very stupid but hold on, I am going to show you how it works in detail!

Skeletons are used to defend and distract opponent’s troops. A pack of Skeletons can easily take down a Mini P.E.K.K.A and other troops on their own. They can deal loads of damage If get ignored!

Zap is the easiest counter to Minions, Minions Horde and Goblins. Just Zap and take them out! While pushing, you can Zap them and let your Witch finish the job.

Bomber is a perfect counter to Barbarians and is your best ranged troop in this deck. It is just like a Walking Bomb Tower. Always have your Zap ready in order to deal with small flying troops! I also like using Bomber to lure Valkyrie and kill her with the arrows from Towers nearby for a positive Elixir trade.

Fireball is effectively used to deal with big backline troops! If your Fireball is not high level, you can drop your Skeletons on the back after using it. This works very well against strategies like Tanker + Wizard.

Witch is definitely an important card of this deck. She can deal tons of damage with her Skeletons in a big push. She is also great on defense too!

Balloon will help you take down a lot of Towers at the early game. Have your Zap ready so you can deal with anything distracting your Balloon. But, honestly, you shouldn’t play Balloon alone. I usually wait until my opponent wastes a high damage air-targeting troops or at least drops it on the other side (Musketeer, Inferno Tower,….). I usually also play something in front of to soak damage and cover Balloon.
For example, I play Balloon + Witch combo. If the opponent plays Minion, I can easily Zap them and let the Witch finish the job. Be creative! You can play the Balloon with loads of troops in this deck!

Giant Skeleton is definitely one of the most important cards in this deck. It is the only true tanker, which punishes your opponent If commits a lot to a push! If your opponent plays 3 Musketeers + Wizard or something like that, it will be a great trade for you as the bomb left can easily remove all of them out, 13 Elixir for 6 Elixir! I love use Giant Skeleton defensively but truly he is also extremely great on offense. Giant Skeleton +  Balloon is a powerful combo that destroy any Tower If you run it the right way. Just play this combo when your opponent drops high damage troop or a building on the other side. With just a Zap, you can easily bring them to the Tower!ap alone can get this thing to the tower, and I swear to god once this thing gets to the tower its all ogre.

Here are some closing notes I want to tell you before running this deck:

If you are finding it hard to counter Air attacks:

Okay guys I hope you have found this deck helpful! I hope you can get loads of trophies with it in the future. Don’t hesitate to comment If you need any help! Also, please share this deck with your friends If you like it. That means a lot to this blog!