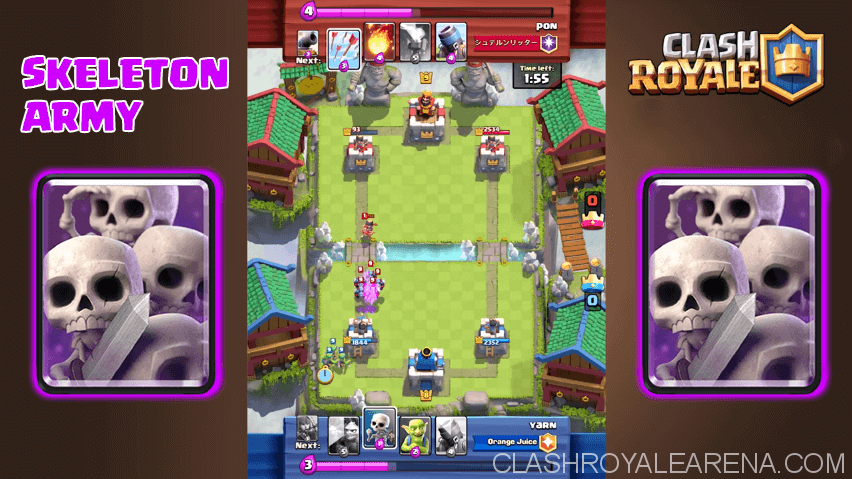 It’s HiPeople MC back with another guide on how I counter most cards (yes, also the hardest counters) with a high-risk huge reward card: SKELETON ARMY! I feel I have mastered the use of this card after getting to Legendary Arena with my Mega Hog deck! Sadly, that guide (my first) was deleted because the mods must have forgotten about my guide when they posted the new Offensive Mega Hog Deck. I still use my deck as my main deck but this guide is all about the usage for the Skeleton Army. Skeleton Army was the epic card my current best account got from the chest from Training Camp that contains an epic.

The most units in a card are in the Skeleton Army, with 14 units. The second most is the Minion Horde, with 6 units.

The Skeleton Army synergizes with almost any push that is about to earn 3 crowns. This assures that the opponent cannot easily defend unless the opponent(s) play something to kill the Skarmy. For example, if you got a 3M Exe Bomber Wizard Minions Skarmy (what kind of a deck is this) push, and they play a Rocket on it, you’ll be happy that the Rocket doesn’t easily kill a full Skarmy. Plus, let’s say you got a Handit (Hog Bandit) push and you know they use a P.E.K.K.A deck. A skarmy is your best utility/push defending card, as the P.E.K.K.A will most likely target the skeletons instead of the Hog Rider and the Bandit.

It also synergizes with a spell bait deck in 2v2. If your teammate can bait out all the easy AoE (Area of Effect) spells from the opponents, and they play an easily counterable card, a Skarmy can easily kill it (probably for a positive elixir trade) and if left encountered, will deal about 1000 damage to their Crown Towers. I remember when I was a noob at Clash Royale, I would often do an offensive Skarmy without actually using it on defense, just because if it worked out, it would deal loads of damage to the tower. The Skarmy also synergizes well with a Mega Knight as then it can save the Mega Knight from its most common counters (P.E.K.K.A, Inferno Tower/Dragon) and deal very high damage to the tower! If they Zap the Skarmy and miss a few Skeletons, and the Mega Knight is tanking while doing damage, that’s tower. 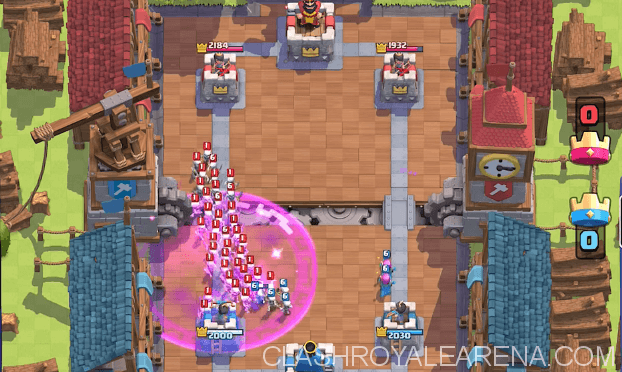 Skarmy can counter almost any troop if placed correctly. (yes, also Wizards, Executioners, and Bowlers, and yes, even the Valkyrie) To counter Wizards, Executioners, and Bowlers, you must place the Skarmy so that the Bowler/Wizard/Exe can only hit some of the skeletons, and the Skarmy can “regenerate” so that less skellies are in one place, and the AoE unit must hit again to kill the Skarmy. While all that happens, the Skarmy is easily stabbing that fatso (or Wizard) with their small daggers, and eventually, the unit dies. For countering a Valkyrie with Skarmy, place it around the middle but not right next to your king’s tower. Place it like the Elixir Collector near the king tower placement. Sometimes, if I have 3 elixir, and their Minion Horde is about to reach my tower, I will place a Skarmy near the very middle, but a bit to the other side, as the Minions/Horde will move towards the Skarmy while the trusty Tower Princess can whittle down some blue killers. If your opponent does a Hog + Fire Spirits push, wait until the Fire Spirits have crossed the bridge, then Skarmy with an edge of the Skarmy at the location of the Fire Spirits. This allows the Fire Spirits to attack about half the Skarmy, which technically gives you a +0.5 Elixir trade. It also gives extra countering to the Hog Rider so that it can’t kill half a tower.

Distracting AoE troops (Wizard, Executioner, Valkyrie, Witch, etc.), Pairing up with spells like Freeze and Tornado to whittle down their HP bar from red to crimson until they die, without a single skeleton being killed! (Unless they use A spell to kill them, but the Freeze or Tornado gives the Crown Tower a chance to kill the troop)

Overall, I think the Skeleton Army is a great card to use, can fit into most decks and can kill almost any tank! I use most of the tips in this guide (All but the last one since I don’t normally use Freeze or Tornado) and so far at 3954 trophies with my Mega Hog variant! (Mega Knight, Hog Rider, Inferno Dragon, Skarmy, Minion Horde, Zap, Arrows, and Fireball, the deck I used to get to Legendary Arena; the mods must have accidentally removed my guide when the new Mega Hog Guide got posted) Either way, have fun playing with the Skeleton Army with these tips!