Whazzup fellow players, Norbysweg here, back at the regular posting with an interesting, very interesting deck that caught my attention immediately I thought about it. 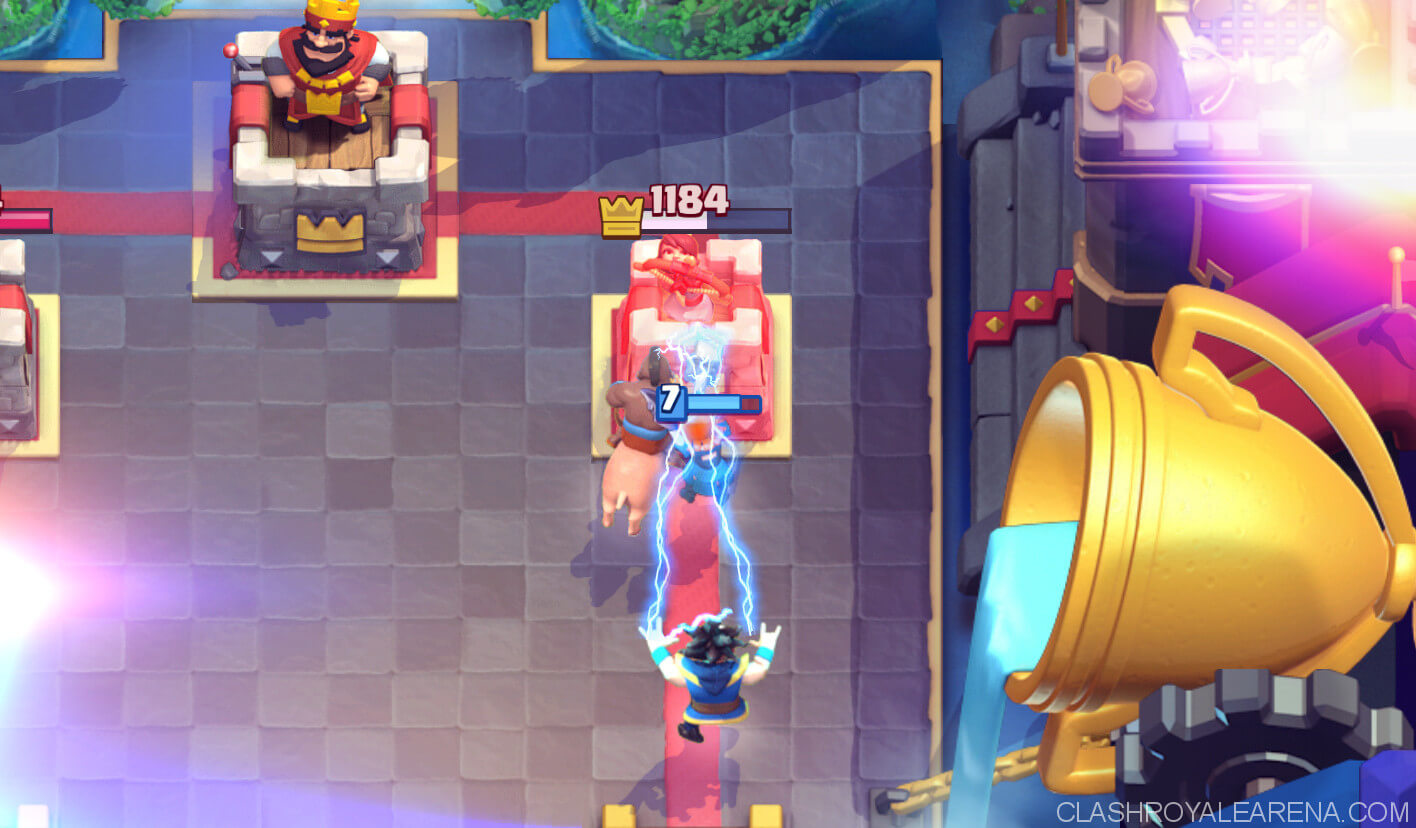 I was trying to find a decent deck for Grand Challenges, until I came to the conclusion that Bandit, Battle Ram and Night Witch basically dominate the Meta.

From then I started choosing my cards. E-Wiz was obvious, since he stuns the Ram, almost hard countering it. Goblins are “the new skeletons”, since they are stronger, don’t die by Zap, dish out huge DPS, and counter the Bandit! I chose Valkyrie for her ability in making huge Positive Elixir trades, for example countering Night Witch + Bandit + Battle Ram, and also providing protection against Goblin Gangs, Goblins, Night Witches. From then it was obvious, this was going to be a Trifecta deck.

Roughly this deck got me a solid 12-Win in a Grand Challenge, along with a 100-man Clan Tournament 1st place! It hard counters most of the meta as stated above, and is very similar to the old Trifecta, thus making experienced players easily understand this deck. Without further ado, let’s get right into the guide!

Hog Rider – Your main win condition, a card that is always representing a part of the Meta, always being a decent Win Condition, both on ladder and challenges. Your main objective during the match is two-sided. Depending on your opponent’s deck, you want to play this guy differently. If your opponent has a slow deck, your goal is to outcycle them, so they won’t be able to counter your Hog the second time. If they have a faster deck than you, you want to save your counters and build up the Trifecta as quicker as possible.

Valkyrie – As I stated above, perfect counter for the trending cards in the Meta, use her in front of your Hog Rider, so she can kill Goblin Gangs, Night Witches, and other attempts to counter your Hog.

Electro Wizard – Your main defensive unit, this guy stuns units, while being able to multi-shot, while also being super versatile and synergizing extremely well with the other cards in this deck. The Triangle Defense mechanism, which consists of the Valkyrie, E-Wiz and Cannon, help destroy almost every push, while the troops being spaced out, cheap, versatile, and well synergized together.

Goblins – Used for cycling and defensive purposes, these guys can be also paired with the Hog Rider for a quick push. They counter many popular cards as stated at the start of the guide, and provide lots of value when used correctly.

Elixir Pump – Essential in the Trifecta, the Pump is used to fund defense, while still being able to push hard with the Hog and Poison. Ideally you want to place it in the back, so your opponent won’t get spell value by hitting both your cannon and pump.

Poison – This spell has its moment of glory in this meta, because it assists Battle Ram and Bandit perfectly, as well as kills Night Witch’s bats, Goblins, Tombstone, Goblin Gang, and also deals loads of chip damage onto your opponent’s tower. Use it defensively when facing a huge Night Witch push, because it kills most glass cannons, while one-hitting the bats, and destroying Goblins.

Cannon – This building didn’t shine much recently, but I like using it, especially in this deck where the point damage is fairly small. It kills Battle Ram easily, as well as Bandit and NW, because of the solid ground damage and cheap Elixir cost.

Log – Self-understandable, helps killing all kinds of Goblins, while dealing decent chip damage and pushing everything back.

This deck is fairly easy to understand, while also being a little more complex.

The best starting moves are:

From here, it’s all about playing it slow, and most importantly, figuring out what deck your opponent has, because you have to adapt your playstyle accordingly. If you play against a cycle deck, you want to be the one who gets positive trades with the Triangle defense, so you can build the Trifecta and wreck your opponent.

If you play against a slow, heavy deck, you ideally want to push the other side with Hog+Goblins, while saving the Triangle Defense combo for defense obviously. Poison is based on the situation, since sometimes is needed on offense, sometimes on defense, depending on the Tower damage, as well as your opponent’s deck.

If you don’t like the cards I used, but the strategy matches your mindset, here are some other Variations of this deck you might like better. Note : This guide applies to these decks too, as the gameplan and strategy is very similar.

Spell Bait – One of the easiest matchups, you have the Valkyrie, the Log, Poison, E-Wiz, and the Cannon for a possible Hog from them, you pretty much sealed the deal with this guy.

More about Spell Bait at here!

P.E.K.K.A Ram – Medium difficulty matchup, your goal is to punish them hard when they Pump up, or play Pekka in the back. Your Valkyrie, Cannon and E-Wiz should counter the Pekka push pretty well, but the most important part is to outcycle them, so they won’t have her in hand.

Golem Night Witch – Medium as well, punish their Pumps heavily, because your Triangle defense can manage the Support troops too. Don’t hesitate on using defensive Poison, since you will always get at least one Hog hit on their tower.

Visit this page If you want to give Golem Night Witch a try!

Graveyard Cycle – This is the easiest one I believe, since you have the hard counter to their Graveyard, you can Log the Tombstone, kill the Mega Minion, get Poison value on the Archers, easily kill the Ice Golem or defend the Graveyard with the Goblins.

Hog Exe Nado – Harder Matchup, since they will most likely Tornado your Hog, but your advantage is the Lightning resistant Valkyrie. You can place your Cannon out of Lightning range, but they still have the upper hand. A good tip is to Pump up, so if they Lightning, you get 1 Elixir advantage. It’s essential to always put the Pump in the back, so your enemy doesn’t get Lightning value.

Royal Giant – Yep, the good ol’ RG. Your main objective is to build up as many E-Wizzes and Valkyries as possible, and use the Cannon to soak up those hits. If you can catch him off-guard, a Hog+Goblins will make him really mad.

So, that’s about it! Hope you liked the guide, personally I had a blast playing this deck, and I hope you will have success with it!

I think I covered up everything in this guide, so if you read this far, you’re ready to play this deck yourself!