Wassup Guys! It’s DabMaster2 with another deck for you guys. Today I’ll be showing you my Axefecta deck. It has a legendary in it but I will provide a good replacement. This deck combos the 3 axe wielding troops in the game with the hog rider to create a versatile offense and a powerful defense.

I first got the idea of this deck from reading comments on an executioner deck. A person mentioned using axe wielding troops in the comments and I thought it could be a great idea!

And that is how the birth of this deck came to be. 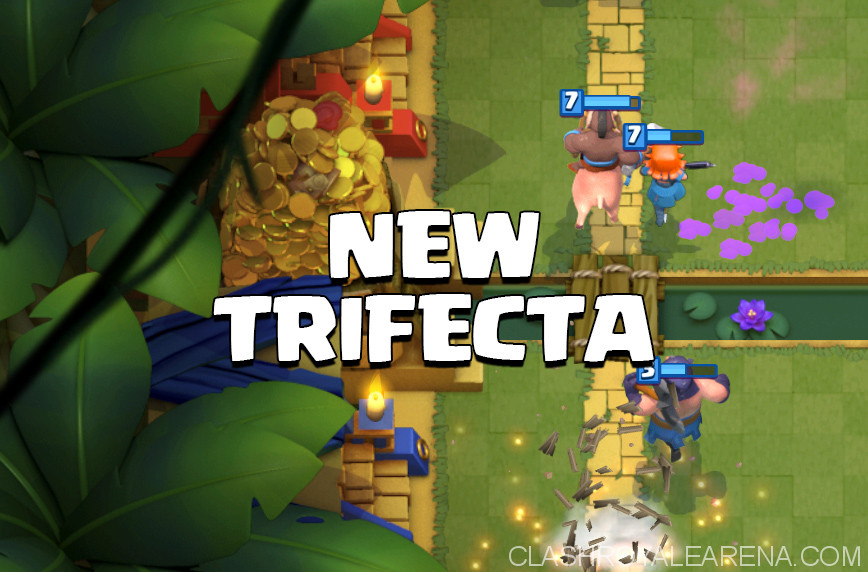 Hog Rider – He is my favorite win condition. His good health, decent damage, and fast speed will always make him a popular card. The basis of this deck is to combo him with one of the axe wielders to make a strong push. Most of the time you won’t want to pair him up with only a Lumberjack because it’s easy to stop with a simple skeleton army. What makes this deck’s attack so versatile is that you can pair your Hog with 3 different troops unlike the classic trifecta which only has 3 main attack troops.

Lumberjack – He is your first axe wielder. The Lumberjack isn’t used much and he was even rated by Ash as the worst legendary on his list at 10th place. But don’t let that discourage you, Lumberjack users. The Lumberjack provides lots of value on offense and defense with his high DPS and drops a rage spell to boost your troops on a Hog push. If you don’t have him that’s fine, you can easily substitute him for the Mini P.E.K.K.A. The Lumberjack has the advantage of faster hit and movement speed and dropping a rage when killed, but the Mini P.E.K.K.A provides more tankiness and a much higher damage output.

Valkyrie – She is your second axe wielder. Just like the classic trifecta, you will place her in front of your Hog Rider to clear the path and tank for your Hog. On defense, use her to clear out ground troops with her 360-degree splash damage. In some ways, she is will be used like Golem but don’t place her if you know she is going to die. For example, don’t place her when your opponent has 4 Barbarians, a Mini P.E.K.K.A. She excels on small troops she can kill fast like against graveyard. Use her wisely.

Executioner – The third and last axe wielder. He has become one of the best cards in the game. He is like a Valkyrie but throws the axe instead. He will shred your opponent’s incoming troops with the help of the Valkyrie’s splash damage support to stop almost any push. Placing him directly in front of your tower like how you would place a bowler, will allow him at hit almost any troops in an incoming push. Use the Tornado to bunch up the enemy troops and get much higher value from your Executioner.

Cannon – This is your defense. The Cannon has become my favorite building now since it can stop a Hog faster that a tombstone and deals decent damage against Giants and royal Giants. Only play this card reactively. Playing it too early when your opponent is starting a push can cause your Cannon to lose most of its health of not all. Play the Cannon the latest possible but not any later.

Ice Spirit – The Ice Spirit is a good cycle card. He helps you cycle through your cards with only 1 elixir to spend. When using this card, use it to freeze troops, and pair it with your Hog Rider for a deadly push. The Ice Spirit freezes the enemy troop(s) while your hog is doing work on their tower.

Fireball –  The last card in this deck. The use the Fireball to clear out groups of medium health troops. The Fireball just provides so much value for only 4 elixir. If your opponent places an elixir pump, don’t hesitate to Fireball unless you have low elixir or if they have 3 musketeers. On offense, use this spell to take down low health glass Cannons such as the bomber to save your Hog Rider from much damage.

Like I said, this deck has a versatile attack. Before double elixir, you usually can only make a push with the Hog Rider and only 2 axe wielders. Learn your opponent’s counters so you can switch your attack combos. Here are your basic attacks:

Hog + Ice Spirit – This is a very basic and cheap attack. It can also be deadly since the Ice Spirit will freeze your opponent’s counters.

Hog + Valkyrie – Use this when your opponent counters with a tombstone or ground swarm cards.

Hog + Lumberjack – Use this combo of your opponent counters with an inferno tower, Cannon, and other single target ground troops.

Hog + Executioner – Use this combo if your opponent counters with air troops and/or ground troops. Have a Tornado ready to pull them in front of your Executioner so he can also hit the tower.

Most of the time, the basic attacks are not strong enough to deal good damage to your opponent’s tower. You will want to use these trifecta attacks with the Hog and at least 2 other axe wielders:

Hog + Valkyrie + Lumberjack – Use this attack if your opponent counters with a ground swarm and a inferno tower or Cannon.

Hog + Valkyrie + Executioner – Use this attack of your opponent counters with air troops and Barbarians or elite Barbarians.

Hog + Lumberjack + Executioner – Use this attack if your opponent counters with air troops and inferno tower or Cannon.

Valkyrie + Lumberjack + Executioner – The “Axefecta”! It is deadly and underestimated. Usually only use this push on a counter push when you have some troops left.

Hog + Valkyrie + Lumberjack + Executioner + Ice Spirit – The ultimate death push! This push will almost always deal massive damage to the enemy tower. If your opponent has an Executioner or bowler, Tornado them closer to your troops to deal with them or possibly Tornado them the other lane.

*Note: These pushes can use a support spell. Don’t be afraid to Fireball or Tornado troops if your know it’s beneficial. But make sure you don’t over commit and use up all your elixir.

On defense, each of your cards has a specific role to play. Defend your opponent’s pushes then counter push with your Hog Rider if you have enough elixir left. A good defense if the best offense.

Cannon (building/tank killer) – Pull in Giants, Hogs, and other high health troops to their death. If you know they have a Giant or a Hog, save this card specifically only for them. Being caught off guard can mean losing your tower.

Executioner (Swarm/Air Control) – Clear out swarms with your Executioner. He can also be used against other air troops since he is your only are targeting troop. Even though he is the only air targeting troops, he is still able to deal with Lava hounds, balloons, and their support with his splash damage.

Valkyrie (Ground Swarm Control) – She works with the Executioner to clear out ground troops. Together, they will destroy any horde of troops coming to your tower.

Lumberjack (Tank Killer) – Although not as strong as the Mini P.E.K.K.A, he is still able to deal with tanks well. He is a squishy troop so don’t place him at a vulnerable spot.

Fireball and Tornado (Crowd Control) – Don’t even need an explanation.

Zap Bait – Easy matchup. Your Valkyrie and Executioner will do wonders for you. When they place down a goblin barrel to your tower, Tornado it to activate your king tower.

Giant/Golem Beatdown – Pull in the Giant with your Cannon while your Lumberjack is doing extra damage to it. Your Valkyrie and or Executioner should be able to deal with the support troops. Use a Tornado to bunch up the enemy troops to help your Executioner and Valkyrie.

Lavahound/Balloon Decks – This is a tough matchup. I’d just say play aggressively. Rely on your Executioner and Tornado to take care of the Lavahound and its support. If your opponent has a balloon, use your spells often to make sure it doesn’t get to your tower.

Elite Barbarians – Have your Valkyrie and Ice Spirit (optional) ready to counter them. Another counter is Cannon/Executioner + Ice Spirit.

Executioner – Lumberjack, Valkyrie, and Executioner will do well against him.

That’s it for now. I hope you think this deck is interesting and try it out. Have a Clashtastic Day! 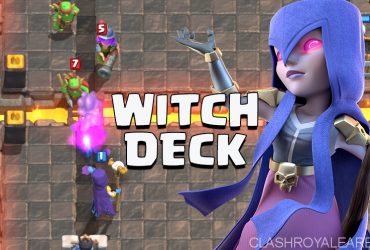 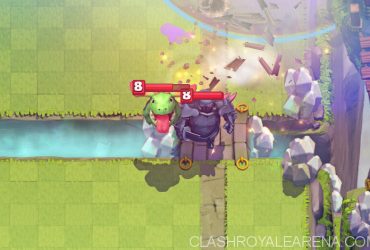 Hello guys (and gals)! I am GhastlyDestroyr from the clan A Kings Ransom and this is my first time submitting a deck. I have been having great success with this …