Hi. It’s me here again with another guide. Today i will show you… ah forget about it!

What’s up my friends, it’s Norbysweg here coming with a slightly smaller guide on, guess what, how to win a big Tournament!

This Saturday, the Fourth CRA Tournament took place, and I managed to hardly but surely win 1st place, at a solid 30 trophy range from 2nd place.

No guys, it’s not all about the deck. Are you interested in creating your own Tourney Layout, and managing to win Tournaments consistently? Follow ahead, cuz you’ll surely be amazed! 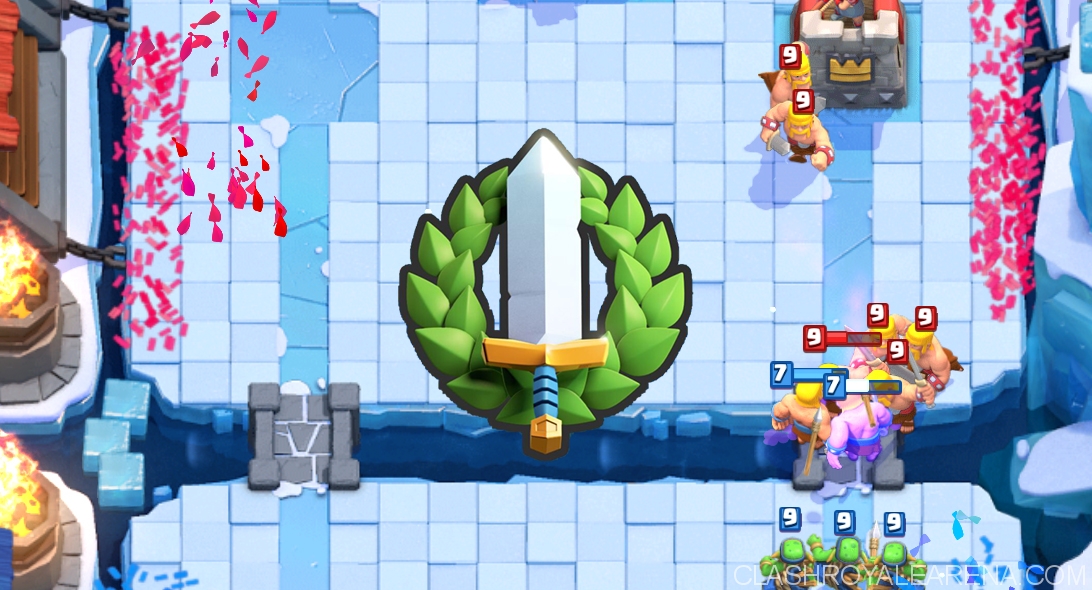 Searching for a Tourney

Kay guys, this should be easier than the play right? Well, it’s NOT. First, you need to find a source for those.

Possible sources would be:

You need to see when the Tournament is hosted, what’s the password, and is it starting with the Preparation or the Battle. I’ve been surprised many times by preparing for a tournament, and then finding out I have to wait 2 more hours for the Prep time 🙁

I mean yes, but in the other way!

With the app starfi.re, you can follow the best players’ player tag, and see all their recent decks, along with how many ties, wins, losses they got.

I was once tricked because i was raging in a challenge, and copied the #1’s deck, not realizing that it’s a Mortar deck with 6 spells. Yep, that’s true.

Best content creators in my opinion are Surgical Goblin, Clash With Ash, Orange Juice, Chief Pat, SirTagCR and Wonderbrad! They have awesome videos, most of them post daily, and they almost always showcase competitive gameplay, like Grand Challenges, Big Tournaments, and you can copy their decks!

But first, watch the whole video, so you can understand the deck. If you want a fresh start, check out Clash With Ash’s uploads, where he showcases lots of hardcore 12-win Decks, along with a Pro invited on the channel, and teaching you how to play that specific deck! It’s just great!

Don’t forget our beloved ClashRoyaleArena by the way 😉

On the decks you need to have stored in your mind, we’re gonna talk right now.

A tournament is usually divided in three parts, those being:

This is where you start, so basically you have to earn those cups fast, since in the start you get more by default.

Researching on a Three Crown deck is very helpful, so do not expect getting in the Top 20 by playing Miner Poison, because it will always go in overtime.

A good strategy would be to use for example a P.E.K.K.A Control deck (or another beatdown deck depending on the meta), and playing slightly more aggressively.

If you don’t lose a single match, you’re on the good way.

The middle, basically you have to alternate between aggressive and defensive, by playing a Graveyard cycle deck for example.

You don’t have high elixir cards, so your deck is very versatile, but you also have the Graveyard as a very good and brutal win condition.

You aren’t supposed to take huge risks by using all your elixir at once, just play slightly smarter.

It’s all for nothing man, Three Crown decks don’t shine anymore, you gotta earn those solid wins and most important, do not LOSE.

You have to play extremely smart, conservative, along with paying attention.

If you do a mistake in a P.E.K.K.A deck, that will cost you more than if you do one in a Miner Poison deck.

For example I am very experienced with Miner Graveyard.

If I don’t want to play 3 or 2 different decks, and Miner Graveyard is in the Meta, i can play it through the whole tournament!

Don’t get hyped up guys, Mineyard is a very Balanced deck, that can alternate between Aggressive Graveyard and Passive Miner. Check out my Guide at here.

If you’re very very skilled with one specific, balanced, meta or off-meta deck, then no need for Tourney Layout!

Setting up your environment

If you like game sound, be sure to use headphones, if you like music, don’t use headphones, so you can hear the game sound slightly. I recommend channels like Trap Nation and Trap city, because Trap is awesome, and it helps many people, along with me, concentrate better, and feel better at the same time.

Play somewhere comfortable, in a place with good Internet Connection, if there’s nobody that will try to place your Elixir Pump offensively, or place your Rocket on the King’s tower, then you can consider yourself safe, for at least 1 hour.

Don’t expect to win the CCGS final tourney on the bus with your friends Zapping the King’s Tower, because let’s face it, stuff like that never works out well.

Also use the device you’re most comfortable with. For example I’m very bad on PC, and my phone is pretty laggy, so I’ll play on my Tablet. 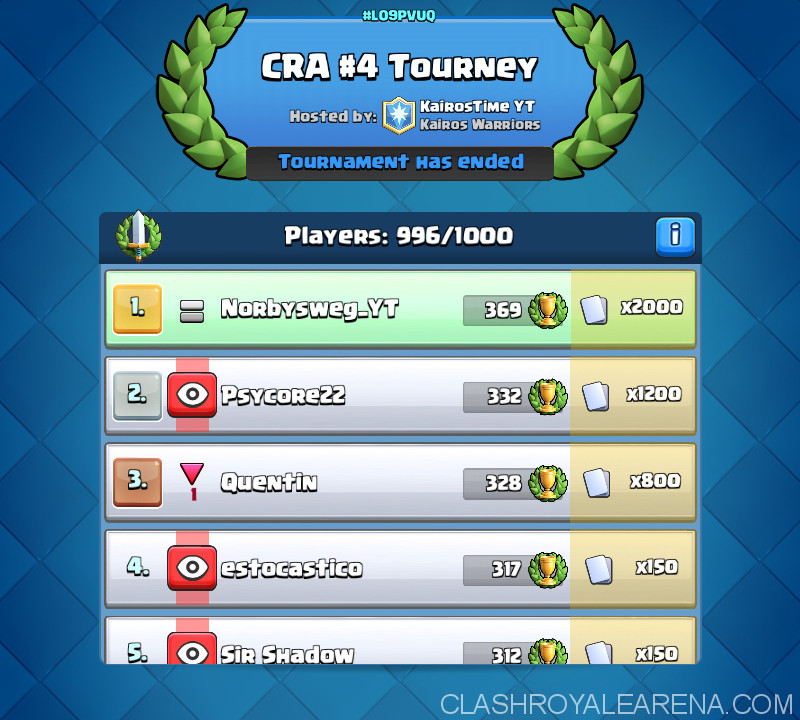 How I won the CRA #4 Tourney

I played at home the whole time, with my tablet, listening to a random Trap City mix. I preventively asked my parents to not disturb me for an hour, and it worked out pretty well.

At 40 minutes left, i was around 200th place, when i started hardcore winning, thus getting myself to #1, with all those Three Crowns. Along the way I managed to beat two players from Champion League, both with 200k+ Challenge cards won. I stood calm through all of the matches, even though my heart was beating hardcore at the end.

Wonder what Deck I used?

It’s called “Romania”. It’s a deck I want you guys to be interested on, because it’s the only deck I used through the whole Tournament, and I promise you that you’ve never seen this deck before. At least not exactly the same cards.

I don’t want to be a clickbait scrub, but I wonder who wouldn’t have given up at 40 minutes left with only 30 cups. Well I didn’t. I pushed hardcore in the last half an hour, without losing any single match against Golem NW, Splashyard, Three Musketeers, Lavaloon, and much more!

Any other than that, the first place stopped playing at 5 minutes left, so I won my last game, and I was happy to realize that I won, after all the struggle.

I’ll be posting the guide on “Romania” two days from now, along with my Chest unlock! 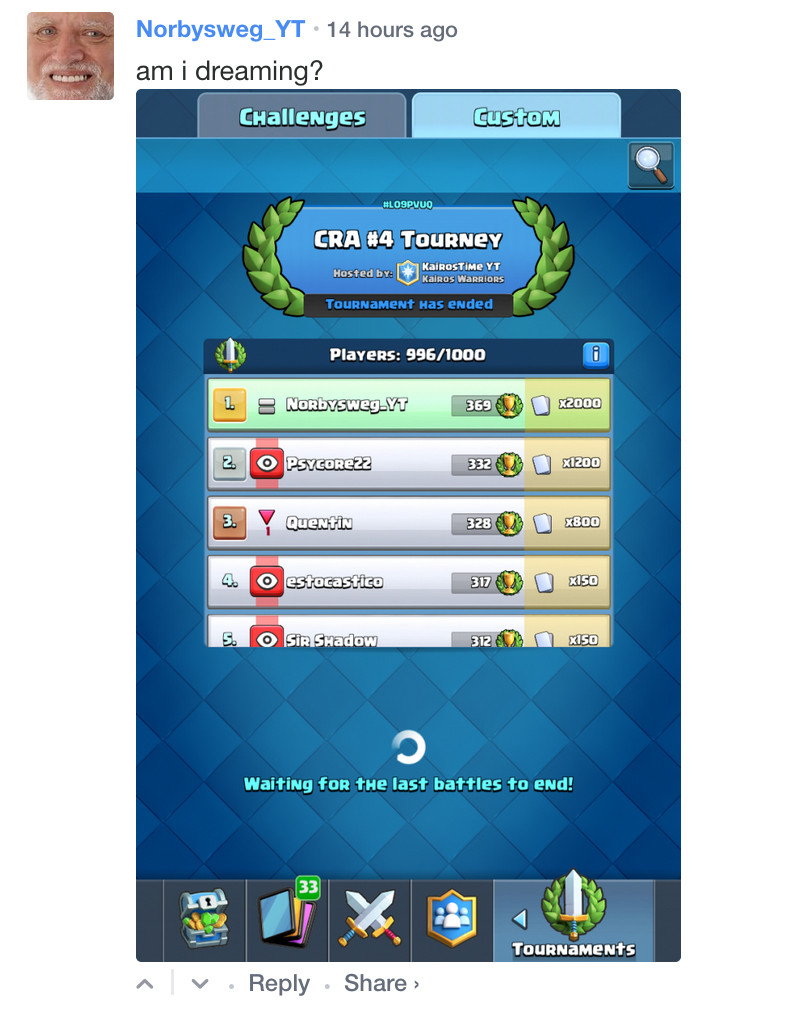 I hope you liked the guide! I’m looking forward to meet you the CRA #5 Tournament!

Thanks so much for Will hosting the Tournaments, and thanks to you guys that read and comment on every of my guides.

Now all it’s left to say is Norbysweg out!