This deck is an absolute meta crusher because it can defend against almost anything, and has a surprisingly powerful offense. 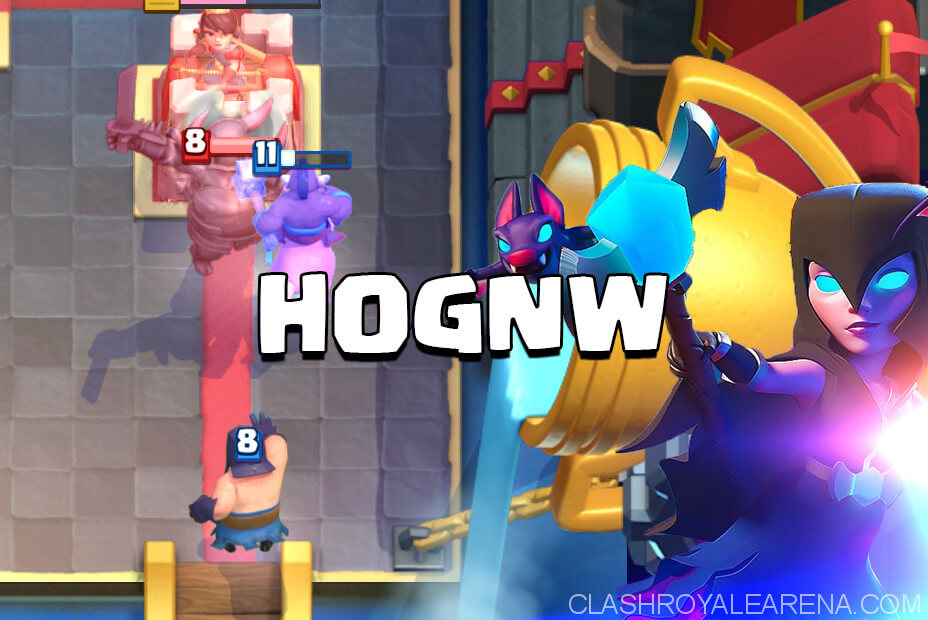 Hog Rider – He is your main win conditions.

The Hog is very solid and been strong in every meta. He is strongest when used on a counter push once your opponent has used a lot of elixir.

Night witch and Knight can make excellent tanks for the Hog Rider.

This combo can be deadly without the right counters. The tanks for the hog to get to the tower while she also can kill other troops with her battle axe.

When the Night Witch dies, she spawns even more Bats to support.

The Night Witch also has very high DPS so she is your main tank and Hog killer.

Knight – On defense, when the Night Witch is assassinating tanks, the knight is her guard.

Use the knight to soak up damage from everything to allow the night witch to survive.

On offense, he can also tank for the hog with 1 elixir less than the night witch for a cheaper push.

Goblin Barrel – This is mainly a threat card and a secondary win condition.

This card spot is more of a free space – you can use any card you want here if you don’t want to use the goblin barrel.

Any support card worth 4 elixir or less will work well instead of the Goblin Barrel.

Executioner – Executioner + tornado is the ultimate push stopper and will crushes the meta.

While the knight and Night Witch are working together to kill a tank, the executioner stays back to execute the enemy support troops.

On a counter push, Hog + Night Witch + Executioner is a very powerful push.

Tombstone – The Tombstone is a building used as a distraction. Use it to pull Hogs, Giants, and other tower-targeting troops into their death.

The Tombstone dies easily so don’t rely on it too much – It’s only a distraction.

The spawning Skeleton will also help for extra DPS.

Fireball – Depending on what type of 2 muskies deck you face, will determine whether you will use Lightning or Fireball.

If you face more 3 Muskies heal, use Lightning. If you don’t face against 3 Muskies heal, run Fireball. On offense both Fireball and Lightning are used to damage defenses and deal damage to the crown tower.

Tornado – Use this to bring troops to your king tower to activate it and use the tornado to pull troops together for the executioner to execute them.

This deck is mainly a control deck by defending and counter pushing with your hog rider. The only time you will go super aggressive is for a punishment push against a heavy elixir investment.

Play very slow and focus on making positive Elixir trades. Only play a lone Hog or lone Goblin Barrel if you want to make a push that’s not from a counter push. Overcommitting on offense can be very deadly for you. The only time it is safe to over commit is in Double Elixir when you have more Elixir flowing and can counter your opponent’s counter pushes more easily.

This Deck’s play style can change depending on the play style of the enemy Deck. If you are playing against a slow and heavy build up Deck, this Deck will play more aggressively as to continue to pressure the opponent so they can’t build up a huge push. Only use light pushes with Hog + Knight or Night Witch.

When playing against an aggressively attacking Deck, this Deck becomes very much of a slow control Deck. Use the solid defenses to defend the opponent’s fast and aggressive pushes then counter attack with deadly force.

When the Giant is played in the back, punish the other lane with a light push. Because the Giant is fairly cheap and only costs 5 Elixir, playing a heavy push might get stopped by your opponent and you will be stomped by your Elixir disadvantage.

Tombstone will distract the Giant while the Executioner kills the support and the Night Witch assassinates the Giant.

Golem – Defending the Golem is like defending a Giant. Everytime the Golem is placed in the back, rush the other lane IMMEDIATELY!

Don’t be afraid to invest a 10 Elixir bar on a punish if it means destroying a Tower and diverting your opponent’s Elixir from the Golem.

It is fine to send Goblin Barrels even if you opponent has a spell because it will make sure your opponent is busy spending Elixir and building up a Golem push.

P.E.K.K.A – P.E.K.K.A control decks will completely stomp your offense if you let it. Although, your own defense can P.E.K.K.A attacks easily too.

The Tombstone will distract the P.E.K.K.A, Executioner will execute the backline, Knight can tank damage, and Night Witch is your assassin to clean up shop.

Most P.E.K.K.A decks run Tornado so always play the Goblin Barrel in the “safe spot” in the upper corner of the Tower where it can’t be Tornadoed.

The Tombstone is the ultimate bridge spam stopper while you have so many other support troops to kill everything.

Mortar/X-Bow – The Tombstone will be the perfect distraction. The Knight is also your best tank to soak up damage from the Mortar or X-Bow.

Miner Chip Cycle – Rely on the Knight and Night Witch to kill the Miner and soak up damage. It is very important to rush both lanes because these Miner chip decks can chip your Tower down and before you realize is, you Tower is already within Poison range.

I once had an extremely close battle where my Tower was within Poison range but both of my opponent’s Tower were close to full and they had a barb Hut in the middle of the field. I knew I was about to lose so I went complete YOLO mode and pig-pushed to by-pass the barb Hut and invested all my Elixir into ONE PUSH! I had Hog + Night Witch + Knight + Goblin Barrel on the enemy Tower and took it all the way down to 0 to win the match while my opponent had to Miner on my Tower with my Tower left at 42 HP.

Bait Decks – Executioner + Tornado is your best defense against the swarms. Tombstone should always be up to distract defenses. Your Knight does a good job clearing out Goblin gangs too. Night Witch will assassinate any miners, or Hog Rider coming your way.

Offense can be very hard if you opponent has an Inferno Tower and all the swarms will kill you Hog Rider.

Always counter push when there is an opening and defend with Exneado.

Hog Rider – Use the Tornado to activate you king Tower, and defense should now be a walk in the park for you.

Just like playing against bridge spam, trade blows by countering each other’s counters to the counters of the enemy counter attack.

Punish every Pump your opponent plays and make sure you have a big lead in normal Elixir before Double Elixir strikes.

In Double Elixir, if you have gotten a Tower, just defense out the last minute of the battle and you win.

Punish every Lava Hound play with your Hog Rider, and you should be in for an easy win!

That’s it for now, any questions, comments, or insults, post them in the comments below. I hoped you like my guide and have a Clashtastic Day!!