Hi; It’s PeakCell, and I still love 2v2. Since 2v2 started being permanent, I created a deck that I just can’t stop using.

It is a ton of fun, and can very often turn bad games to good ones, based on surprising your opponents and outplaying them. 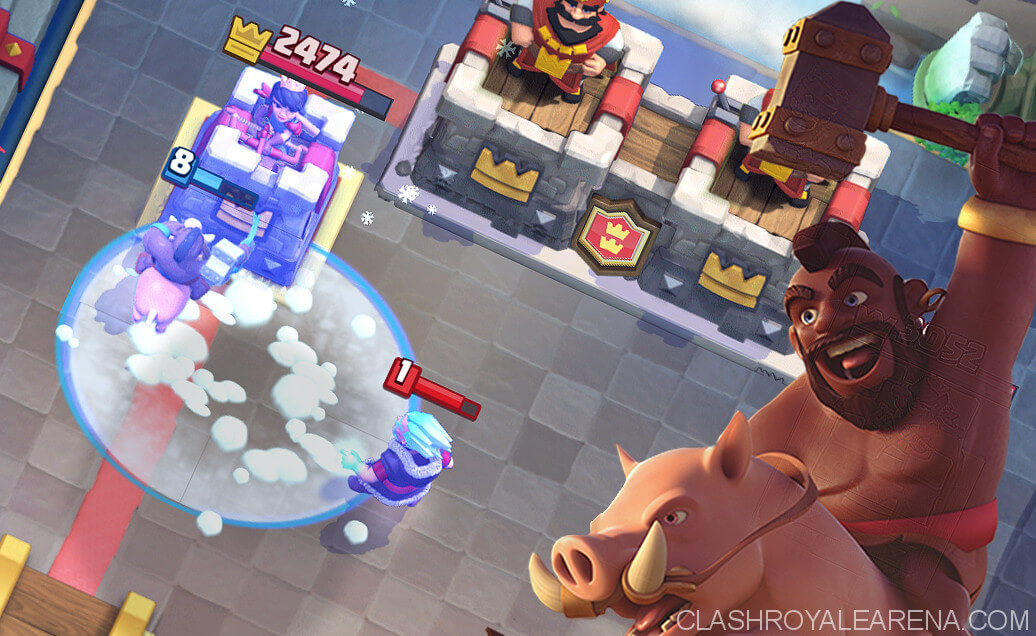 He can kite and avoid buildings. He’s the Tower destroyer, opponents will often panic when seeing him and use a lot of counters at the same time and in the same spot, allowing for an easy Freeze spell.

This deck has a fast cycle, making the hogs spamable, allowing for many great occasions to Freeze correctly.

Of course, you can also pig push to avoid buildings, try to split push, and kite with the Hog (Like, if a Knight is coming on your side of the map, you can counter him by sending a lone Hog who will take his focus while jumping, letting the Tower hit the Knight for a longer time without being hit by him)

Freeze Spell: What you need to take a Tower easily with your win condition.

Also spamable, this spell will be a great tool to take a Tower, but ALSO to defend.

ou have to use it right tho: Not too early, not too late, and in the good spot.

Wait for your enemies to place their counters, then Freeze them. The Freeze spell synergizes very well with Goblins, who will destroy the frozen units/towers. In defense, it’s the same but it also allows an easier spirits placement.

Goblins: DPS units pairing well with the Hog Rider, and the Freeze spell.

They are very strong, both on offense and defense. Their DPS will shred low-health units like Musketeers, wizards etc. Not much to say about them except that tho.

If their level is higher than your opponents’ Tower levels, you can sometimes send them alone, forcing a reaction.

Fire Spirits: Burst units that will clean the way for the Hog Rider.

Same as Goblins: You can force a reaction by sending them alone if their level is greater than your opponents’ towers’ level.

Sometimes, your opponent will let them reach the Tower to defend easier against the Hog Rider, taking a huge risk because of the damages they do.

She often reaches the Tower because of her surprizing dash damages.

A Freeze spell can help her a lot, finishing a unit she dashed on, to dash on another one etc.

The Log also buys time for a great Freeze spell. It is mainly a defensive card in this deck tho, because when paired with spirits it can counter a lot of things pretty easily.

Zap: The card that does so many things. Usually used against air units.

Helps to finish things easier (like a Cannon or Tombstone), or to kill swarms. Also, it makes it easy for your team to counter Inferno Towers.

What’s the point of this deck?

2v2 is really not about having a great 1v1 deck, but more about pairing with your team mate.

If you check this deck’s composition, you’ll find cards that synergize with a lot of others; but you’ll also find the deck has a powerful offensive potential by itself.

Yeah, the deck is designed to be able to help a mate but also to win by itself. That’s why it is strong in 2v2!

The attacking goal of this deck is to get a Hog on your opponent Tower and then Freeze it; as a simple Hog Freeze deck.

Also, you will need a good timing skill to make the best of the Freeze spell, effectively freezing the Tower AND the Hog counters your opponents deployed.

Try to only use the Freeze spell when it is useful, because it is an 8 overall elixir investment with no damages to units, making you being very vulnerable for a big counter push.

Usually, people who play 2v2 tend to play a complete deck, so you don’t have to worry too much about the lack of anti-tank in this deck. It should still be fine. It will only be a problem in certain cases, like if you encounter a Golem + Balloon push. Here, your ally shouldn’t be able to handle the whole thing by themselves.

This deck was built for 2v2 only and is clearly not a good deck for 1v1 modes. However, it is a ton of fun in 2v2, especially because of the fact that you can use any unit from your ally at your advantage easily. Your three spells should be able to help your ally a lot too, and the Hog + Freeze combo can make your opponents spend tons of Elixir and take a lot of risks.

The main card skills you need to play this deck is about mastering Hog tactics, knowing how to play the spirits, and timing the Freeze spell correctly.

I hope you will have as much fun as I have with it!