Hey guys, I believe you guys can all notice that beside the Inferno Tower, the Tombstone is currently the most popular defensive building in high Arenas. It is because the Tombstone can easily deal with the tricky Furnace decks, Giant, Hog Rider, Lightning and so many other popular threats. I’ll explain a bit more, but first want to say the true strength of the Tombstone is its ability of spawning Skeletons and the ability to sway troops that only target defenses. I’m going to put down why its strong based on troops it counters and where it has obvious weaknesses. 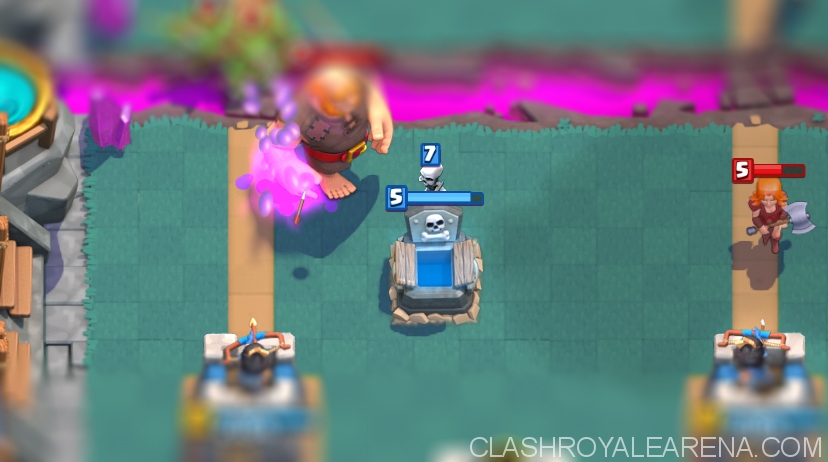 The Tombstone should never be placed behind a Tower unless its being used to counter spawners. It should always be placed in the middle of the Arena to draw troops into double tower fire.

The gist of what are going to read is this card is great against slow attacking non AoE attackers.

Hog – This card is an absolutely amazing counter to Hog Riders. A lone Hog Rider (probably used in hog freeze) can be easily taken out by the Tombstone while allowing it to get 0-1 hits if done properly. When you see the Hog dropped, place the Tombstone in towards the middle of the arena bringing the Hog into both towers’ attack range. It’ll take 2 hits to kill, buying some time and damage. Once broken 4 more Skeletons will spawn and proceed to beat the hell out of the Hog. The benefit of this is the time it saves as well as being pretty nice vs Hog Freeze. This is because if the Freeze Spell is used before the Tombstone is broken the Skeletons that spawn after are not affected by it and if used after it’ll give you time to drop Gobs or anything else to take care of the Hog.

Sparky – That’s right, this card is pretty awesome against Sparky. The beauty is that Sparky has to charge up her attack, which takes pretty long. By that time there is always a fresh Skeleton to bait her shot again. And even if she hits the Tombstone you now have 4 more Skeletons for her to have to hit again while they are stabbing her. You can get the Positive Elixir Trade against Sparky most of the time!

Prince/Dark Prince – This card absolutely destroys Prince/Dark Prince. The slow and steady flow of Skeletons stops them from charging as well as once broken the Prince will be exposed to dual tower fired and with his slow attack rate over powered by the Skeletons. One Tombstone placed properly can easily take out a Prince or Dark Prince and sometimes if done right, you can take out both together.

P.E.K.K.A/Mini P.E.K.K.A – This card deals with P.E.K.K.A and Mini P.E.K.K.A in the same why but I’m going to focus on P.E.K.K.A because she is a bigger issue. This is great as again it pulls her into double tower range. The P.E.K.K.A can pack a huge punch but with her insanely slow attack speed the Skeletons buy a large amount of time while shredding him up. If there is nothing to assist the P.E.K.K.A a single Tombstone will destroy him which is a huge Elixir trade.

Giant Skeleton – Somewhat the same as above but with the benefit again of drawing him away from towers. Being a father doesn’t mean you are immune to your kids – alsoandanswer

Golem/Giant – This is a really effective card at dealing with Golem/Giant. Tombstone will pull them to the middle, where both of your Towers can hit them, slow them down and distract the supporting Mega Minion.

Barbarians – Believe it or not but a single Tombstone can take out Barbs by itself. Tombstone pulls Barbarians to the middle. Not being able to split focus makes them have to kill each Skeleton individually, which takes them a lot of time. Plus its a great Elixir trade. Normally the Barbs never reach your tower. This is also great if placed well against Barb spawners.

Balloon – The reason this is effective as it is a really cheap way to maneuver the Balloon away from the tower into dual tower range. This can be done with any other defensive building but Tombstone is so cheap. While pulling the Balloon, Skeletons from the Tombstone also help us distract support troops nearby like Mega Minions, Baby Dragon or Minions. I’ve also used it to pull the Balloon into my King. (Targets the Tombstone, then my Collector behind it, then goes to my King and activates him).

Gobs/Spear Gobs/Skeletons, Skeleton Army (spawners included) – This one is pretty obvious. These guys are squishy and if you can distract them for a second or two your Tower will make short work of them. Obviously this isn’t a good Elixir trade if the spawner dies but that rarely happens if done correct. This is also great a slow defense against those annoying spawner decks that like to chip away at your towers.

Witch – Even though this card isn’t used very often it is still very strong against as it doesn’t allow her Skeletons to get stacked up while also distracting her shots.

Musketeer: Place the Tombstone right on top of the Musketeer before she hits your Tower. Good a really good move tho. Only do this in the worst situation.

Tank + Lightning: Thanks for releasing the Skeletons! Most of the time, the opponent has enough Elixir to use Lightning when the tank is already pulled to the middle.

Royal Giant: If it’s too late and the Royal Giant is already locked on your Tower, place the Tombstone right on top of him to force him re-target it!

Most anything that is AoE – This includes any projectile (Zap, Arrows, Fireball) but also includes Wiz, Valk, Bomber. I only drops this in those cases if I truly need to buy time for the tower.

Any other card I missed was either because of redundancy (Knight) or because its kind of hit or miss if its an actual counter.

TL;DR Just use the Tombstone. You will definitely like it!