Hey iJumpFtw here with my first deck I have created, I currently am roaming around the 3600 range with this deck. This deck is quite tricky to learn but easy to use after you learn how to use it. 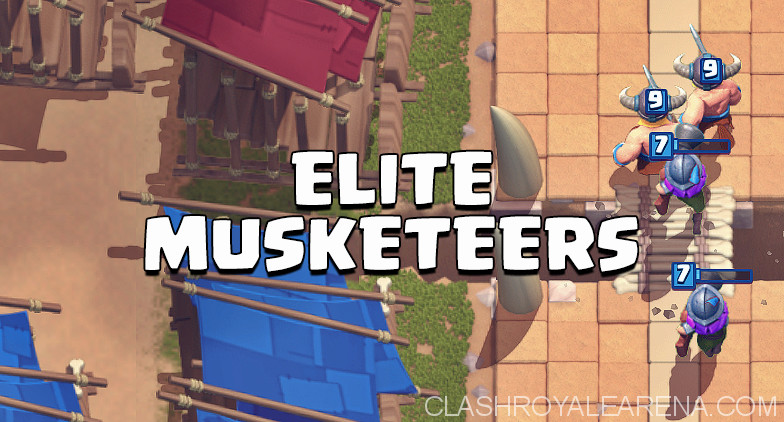 These bad boys can surprise the enemy, leaving them short with elixir if they panic. You could quite possibly get a thousand damage done easily with just these guys.

Three Musketeer: These girls must be split when going for the first tower.

Also, when using Three musketeers, you have to play mind tricks with your opponent. Make it seem that you are committing alot to the side with 2 Musketeers. Most often, the two Musketeers with support/tank is shut down but the goal is to chip down the other tower with the one Musketeer, after you’ve done over half a tower’s damage they will finally try to defend that tower.

Three Musketeers also take down air decks and cycle decks like a pro.

Just a small tip: Don’t waste your time if they have a Fireball that can kill your Musketeers without a Zap/Arrows/Log with it… just give them the win because they’ll just keep getting positive Elixir trades off you and you lose desperately.

Zap: Use Zap like any other way you usually would.

Zap is most helpful at dealing with Skeleton Army during the Elite Barbarians rush push. I also does a great job at stunning air troops so you can get the extra hundreds of damage that could cost the game. Remember use your zap freely, you have a Tornado that can help clearing out with other small troops.

Tornado: You can also use Tornado for the Elite Barb push, most often I see people place Ice Wiz in the center of their side of the arena pretty early. In that case i just pull the Ice Wizard to the other side because it’s a pretty tanky card.

Now for low elixir cards, you want to pull them closer to the Elite barbs so they can clear it out while taking minimal damage. For instance, pull Archers and Princesses.


Tornado is also excellent at pulling Hog Rider, Golem, Lava Hound or Giant to your King’s Tower. Having 3 Towers defending is such an insane advantage!

Lumberjack: It’s literally an elite push if you add this guy to the push. He’s like a Elite barbarian but even more helpful with clean up. Try to keep him in front of the elite barb rush so you don’t waste the Lumberjack’s Rage Spell.

He acts like a mini tank and hammers small troops. Overall a great card to wield.

Ice Golem: The Ice Golem might not do much damage but its death damage has a great impact to the game.

The Ice Golem at tournament standard does 70 damage. This is enough to take out the pesky Skeleton Army. This also weakens Minions/Minion Hordes and with a zap on Hordes, you can get yourself a positive elixir trade.

Ice Golem is also a special card because of its ability to pull troops to the other side of the arena. This comes very useful for Barbarians, Valkyries, etc… and this also lets you gain a positive elixir trade in most cases. Ice Golem is most effective when Tombstone is not running. He also is useful in cases of tank and spank.

Skeleton Army: Very straight forward to use. It is used more as a clean up crew than an attacker.

In many cases they can lead to a positive elixir trade. Don’t be afraid to use them to deal with Archers because it’s an equal Elixir trade and even if you don’t realize it, they can do 500 damage easily afterwards. Don’t underestimate them!

Split Three Musketeers at the center, in front of your King’s Tower. The reason not to split Musketeers in the back is

The trick is, you try to express that you are focusing on the side with two Musketeers by placing an Ice Golem in front of the two Musketeers. But chances are, that push will be easily destroyed. Meanwhile, the other side with one musketeer will chip off damage on the other crown tower.

The number 1907 is engraved in my head because that’s the amount of hp left on a level 10 Crown Tower when a single Musketeer does full damage to the tower.


This strategy’s main point is to make them spend Elixir and keep them busy because they will most likely throw a Zap/Arrows and try to kill the lumberjack in anyway before it hammers down the tower.

Usually this is used as a counter push for the times they make you use an skeleton army so that you can get lucky to bait a fireball or maybe get some chip off of an tower.

The best part of Three Musketeers is once one tower is gone, you almost always get the second because you can place the Three Musketeers on their side the closest position to the king tower and other crown tower. This is especially useful for clan chests.

Usually Tombstone is first priority and you should always keep a Tombstone running in the middle of your arena.

A 3-2 or 4-2 plant works fine with the Tombstone. The Skeletons usually intimidate the opponent and makes it harder to push the lane that the Skeletons are going.

Again, in this scenario we are playing mind tricks on the opponent because they would rather push a lane without enemies than with enemies.

The catch is keep the Tombstone running as a primary distraction for any troop incoming. Use Skeleton Army + Ice Golem to clean up any big pushe with the tank and spank technique

If excessive protection is needed, use Elite Barbarians or pull the opponent’s troops near a new Tombstone using the Tornado.

Air decks are no problem because Three Musketeers packs such a punch Lava Hounds and Balloons die in seconds.

Thanks guys, feel free to check my youtube channel out as well