Hey guys, Luke The Legend here, and I got a really good F2P deck for you guys! It’s a deck that I used to get from 2500 to 3200 trophies very quickly. Let’s dive right into the action! Giant– Main win condition of the deck. In my opinion probably the best tank in the game in terms of cost/HP. It’s only 5 Elixir and can be played at the beginning of a game without much of a worry because it’s not as big of an investment as a Golem in the back. This makes this card far more versatile. Also Inferno Tower isn’t as bad of a counter because unlike Golem it’s a 5 for 5 trade thus even for you if you let your Giant go.

Mega Minion – This single high-damaging flying troop, which survives lots of spells, earns its place in almost any deck. Use the Mega Minion as your main air defense unit, use it as a support killer in some situations, use it to finish off Elite Barbs or Hog, or use it to support your  Giant for a solid push when you have the Elixir advantage. No special use for the Mega Minion, just there for solid Air Defense, All-Round capabilities and the insane value it offers.

Bowler- This card is very strong this meta because despite countless nerfs around the 3000-4800 mark a lot of people use Elite Barbarians and Hog Rider along with Log bait. This card can counter those very well. The push back effect is simply amazing and paired up with the Giant this card is very strong. It moves slow as well. Now one thing you should avoid is, Bowler near Tower if opponent has a Rocket unless you’ve baited it out because this is almost free 432 damage at tourney standard on your Tower.

Baby Dragon-  This card is so good against Log Bait. It is highly underrated and a great support for your Giant. Bowler and Baby Dragon? What Barbarians? What Elite Barbarians? Adding this almost gives you a 100% win rate vs any sort of Log Bait deck. This deck utilizes splash and uses the spells to optimize that so all the cards synergize well with one another,

Lightning-  This card is very versatile and should be used on pumps. This deck is very strong vs 3 muskets so don’t worry about using Lightning on pumps. Also try not to do something risky like using Lightning on a sole ice wiz on offense before 2x Elixir because that can come back to bite you in the A-S-S (I know what that spells!) if you don’t take that early Tower.

Arrows – With the raise of bait decks, this card gives me a lot less trouble when attacking, This card’s primary target is Minion Horde and Minions.

Zap – With the raise of bait decks, this card is the assistant to Arrows, with its primary target being Bats.

Knight – Very well-rounded card to deal with a lot of cards, including Valkyrie, Witch, and Wizard. It can also survive lots of spells, earning a spot in almost any deck. No real use for this card, just there for you as a utility and the insane value it offers.

Now this deck is very defensive. You typically want to either slowly build a push or simply defend then Giant in front of the counterpush.

Some ideal starting moves would be either Giant in the back, Skeletons in the back or even Bowler in the back.

I would avoid something like Baby Dragon in the back just in case the opponent has Graveyard because Baby Dragon is amazing vs Graveyard you want to save that, and also you want a change to build a push as well.

This deck isn’t quite an one-push Tower taker. You will want to send wave after wave of giants ultimately crushing their defenses and send them crying home. This deck excels at that.

Unlike most other beatdown decks such as Golem or Lavahound a tank in the back is not as punishing and a push like Hog + E-barbs can be countered very easily by Bowler + Knight.

I always wait till the Giant is at the bridge to place the Baby Dragon because of the different move speeds and there is a chance that the opponent might place squishy troops feeling a false sense of safety since a splasher is not behind the Giant.

So in a nutshell- Start off slow. Don’t expect to take a Tower early on unless your opponent pushes the same lane and you have an unstoppable counterpush coming. Try not to predict Lightning and DO NOT  cycle Baby Dragons. That + make positive Elixir trades.

Now you know your opponents deck. Try and keep track of cycle and Elixir as well. This deck you need to keep track of these things when making predictions.

So with the cycle and who is ahead in Elixir in mind you want to then start building your big pushes.

That being said before 2x Elixir rather than spamming troops ie- Bowler, Baby Dragon, Giant to get countered by an Inferno Tower because you don’t have enough for a Lightning think what they might counter you with.

If they use swarm cards and Inferno is out of cycle then go all in with maybe Arrows in hand.

If you just defended a push like Hog + Horde and only counter is Inferno then try not to spend Elixir because you want Lightning vs that Inferno Tower etc.

Also one thing to keep in mind is damage is okay with this deck because you want to counterpush. Ie- Hog + gobs coming in but you can Bowler it.

Take that swing and invest in your push.

Counterpush and don’t overcommit saving Elixir for what you need. Ie – Rather than spamming troops you can simply Giant + Baby Dragon and save for Lightning if they only have Inferno as a counter rather than getting hard countered by the Inferno Tower.

Here you amp things up. That being said build up slow pushes. You want to put as much Elixir behind your Giant as possible. (Assuming they don’t have Rocket- In which case space out your troops).

So in this situation if you have to choose between Tower damage or saving the troop essential for your push just tank the damage. Judging when to take damage and when not to is a key skill you need to develop. In a nutshell, play smart and let all hell break loose.

Ah finally the big question. How do I beat spell bait and Lavaloon? Miner cycles with Inferno? Graveyard? The answer is… very easily. Sorry I’ll shut up now. Onto the match-ups.

Vs this match-up honestly just keep this in mind Lavahound + Balloon alone cannot 3 crown in a push. However you can.

So I usually like to go for a Tower trade because It’s far easier to play this deck a Tower up. That being said a cool little defense I learned was to Lightning + Mega Minion if the Balloon and Lava is unsupported and this shuts the whole thing down.

Early game you will most likely not make it to the Tower because it is hard to really Lightning and Log etc in the same offensive push with Giant + support but ideally you want to defend, not lose your Tower and counterpush early on but in late game it is very easy because you really just need Baby Dragon, Giant, Lightning and Tornado to melt all their defenses but truth be told you will have a Bowler behind the Giant as well.

Also vs this matchup please don’t keep putting Bowler behind Tower if they tend to Rocket it. Other than that this is a very easy match-up. Vs this match-up you ideally want to Lightning the pumps and prevent giving them Lightning value. Try not to face Golem head on as the Giant is the smaller tank. It’s best to trade a Tower early on, preventing damage on the king Tower though then go for the 3 crown.

MY PRAYERS HAVE BEEN ANSWERED!

Such an easy matchup. Bowler + Giant, honestly…. Siege doesn’t stand a chance. Just don’t do something stupid like Bowler in the back if it’s Mortar 2.9 because they have Rocket and also this can allow the opponent to get a Mortar or X-Bow to lock onto the Tower.

You will be out cycled but that’s fine because in 2x Elixir there’s really not much these cheap cycle decks can do, even X-Bow as it relies on Inferno and you have Lightning. Baby Dragon and Bowler for the troops behind. Try not to clump troops together if the opponent has the Rocket.

Save Baby Dragon for defense, you will need to deal with the tank with a Bowler or Mega Minion, and you can shut down almost any Graveyard push.

Poison does not counter any cards in this deck, which means that synergy doesn’t work too well against this deck.

This deck is super strong, extremely versatile, and it can be used in a variety of different metas. I understand it’s basically the Giant Bowler Meta deck but with Baby Dragon and Knight. Both decks work so well because of how well the cards synergize with one another and I believe this deck will bring you a lot of success. It’s really fun to play and easy to use and counters the current meta well, especially the ones that use moderate to low health cards (Witch, Wizard, Musketeer, Bandit, Night Witch, ) a lot of the time.

If you have any questions, email me at sakupenopening@gmail.com. 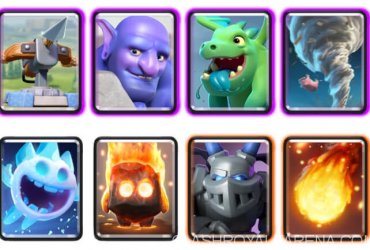 I. INTRODUCTION Uh oh! Another bait deck – the archetype that many players hate. If you’re on an F2P quest, an all-commons deck may be a very ideal choice and … 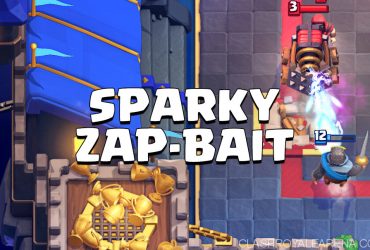