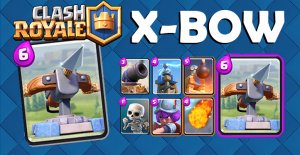 Hello people, today I(HS) will introduce you to a superb xbow deck that got me 12 wins(classic) and a lot of trophies! This deck is really well known, so I don’t know why there are no guides on this cool deck. Also, a lot of pros used this deck ladder and challenges, so you have more proof that this deck rules. Be aware though, this deck has a high skill cap, just like any xbow deck. So if you aren’t familiar with xbow, then I would advise you to stick to your normal deck. Enough talking, here comes the guide!

Xbow: what would a xbow deck be without it? This building is your main win condition, and if locked onto the enemy’s tower, it will deal a lot of damage, perhaps take out the tower all by itself! Now, I will explain some of the basic rules of xbow.

And you can just use it to attack and not save it for their tank pushes(beatdown), you have Tesla for that. That is the main reason I find this deck more comfortable than the ice wiz rocket cycle deck.

Knight/ice golem/mega minion: with his amazing mustache, he can slay any foe in his path! Just kidding. He is your main ground defender and the Xbow protector, due to his amazing health per elixir ratio. Same can be said for ice golem. Both do a good job protecting the Xbow, but the knight is better at taking out the cancer combo on the ladder, while ice golem is cheaper, can eliminate swarm, and allows you to cycle faster. To sum it up, knight for ladder and ice golem for challenges. But if you are overleveled, ice golem is good on the ladder too. And as for the mega minion, he performs his defender/protector role in a different way. He has insane burst damage, enabling him to quickly eliminate glass cannons such as bandit and miner. He can even target air, which helps against air decks such as lavaloon. But he doesn’t have much health, so he isn’t suitable for long fighting. The choice is entirely up to you.

Just like any other deck, play carefully and look out for their counters to your Xbow. remember rule number 1, never use Xbow at the bridge alone during the first minute unless rule number 2 happens. However, you are allowed to build up a small push from the back to draw out their counters and get the feel of their deck. If it is log bait, you can defend much easier, and is possible to fireball cycle. However, when facing beatdown or fast control, you can never let your guard down. To sum it up, play passively.

At this point, you should have enough knowledge of your opponent’s deck and counters to Xbow. then you can start to attempt medium sized pushes to chip their tower down. There are two things to remember: don’t be too ambitious, and positive elixir trade. You should know when to support a Xbow or abandon it to gain elixir for the next push. Usually, I abandon Xbow when I am sure they will finish it off with a heavy spell(get to know their deck first!), or when they drop a hard counter such as RG or golem. But when you are dealing with hogs and low hp glass cannons you can kill with the fireball, try to support it. And it isn’t time to go all out yet, so keep making elixir advantages(ex: killing minion horde with ice spirit and tower), and you’ll be fine.

About 10 or 8 seconds before DE(double elixir), start building up a push in the lane your opponent is going for. This way, you can prevent any punishments by your opponent. Of course, if they have rocket, it might be wise to space your troops out a bit and not rely on stacking troops. Once your troops reach your tower and DE hits, place the Xbow and go all out! If your push fails, there are two options: turtle up and aim for a draw, or try to set up a counter push. I would say go with the first one, since it is much safer and naturally fits with the siege idea, but if you are ambitious, then try not to spend more than your enemy, and control the card placements so they can actually help your Xbow in your counter push(for example, place Tesla near the river to defend and enable it to snipe melee troops trying to destroy your Xbow). 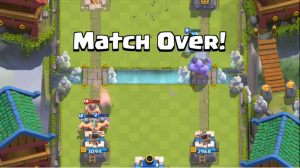 Well, that was it clashes, I hope you enjoyed the guide! This guide was a bit rushed, so I couldn’t include as much as I would have, including specific matchups. 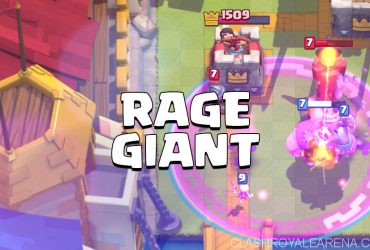