I’m gonna tell you a true story, The Birth of the Swefecta Deck. A little boy, was eating a sandwich before going to sleep. He was thinking of why he just lost so many battles in a row. He thought of a deck, a deck called ”Trifecta”. The Trifecta is a deck featuring Hog Rider, Musketeer, Poison, Cannon, Pump, Valkyrie, Skeletons and Zap. He thought that if he could make a deck, as powerful, as that deck, he would probably win some battles. He choose his favorite card in the game, The Hog Rider, as a win condition, one of the best units to support the Hog Rider with, the Lumberjack, then he choose a third card, the Wizard. Those three cards were the heart and soul of his deck. The name of the boy, was Zigge… 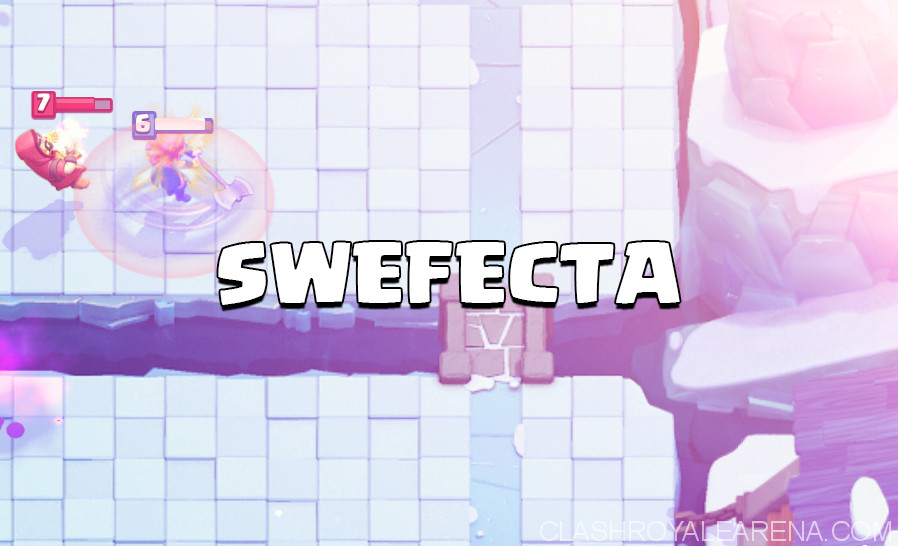 What up guys! Zigge back with another amazing guide for you guys! I’m gonna show you my new deck called Swefecta. This deck uses a Legendary but I’m gonna show you great substitution for it. It’s an update of the old deck called Trifecta. When you play the Trifecta deck, you spammed Pumps until you had a massive elixir advantage. Then you deployed your Cannon, Valkyrie and/or your Musketeer for defense. You placed your Hog Rider behind your Valkyrie, deployed a Poison spell on their Arena Tower. Then you just had to wait and watch your troops whittle the tower down. Let’s get into it!

Hog Rider – Your main win condition. Use him with Ice Spirit for mini pushes and with other troops, such as Wizard and Lumberjack for a bigger push. This deck is made for you to chip your opponents tower and then finish him off with a big push. The Hog Rider works very well with many troops which gives him a lot of versatility. I most cases, you want to attack the left side. Wanna know why? Here’s the answer: The Hog Rider has a big chance of jumping over the river if you place him on the farthest left side. That chance doesn’t exist if you deploy him on the right hand side. He was used in the Trifecta as win condition. This card is not replaceable due to its unique ability.

Lumberjack – Your secondary win condition. Couple him with the Hog Rider or with the Wizard to create deadly pushes that your opponent will have a hard time stopping. If your opponent leaves this guy alone, he’ll decimate their tower, I can promise you that! His very fast move and attack speed makes him very good with the card you want to use him with; The Hog Rider! The Trifecta was created before the Lumberjack even existed so it was of course not used in the Trifecta but I feel like this is the replacement for Musketeer due do their high point damage they share. This card can be replaced with Mini P.E.K.K.A but LJ is recommended if you have him.

Ice Spirit – Your win condition support. One of the most popular cards in the game. Couple her with the Hog Rider to make small pushes. She’s one of the best cards to use with high, splash damaging troops such as the Wizard, due to her ability to freeze all of the troops she hits. Ice Spirit was not used in the Trifecta but I feel like this is the replacement for Pump as it isn’t that good anymore. This card can be replaced with Fire Spirits if you find yourself weak to Arrow and Zap bait decks or just with swarms.

Tombstone – Your main defense. Good ol’ Tombstone. Tombstone is the nightmare for a Hog Rider user and can cause pain to many other decks. Its ability to spawn 4 Skeletons when it gets destroyed is incredible against many troops. You better protect your Tombstone, it will cause pain to your opponent. Do the usual 4-3 plant against Giants, Golems and Hog Riders and a proactive plant against Royal Giants. Tombstone was not used in the Trifecta. It used Cannon instead. This card can be replaced with practically any defensive building.
Related topic: Why you should use Tombstone

Fireball – Your defensive support. Fireball + Zap was the mother of Poison + Zap. The Trifecta uses Poison + Zap so I decided to go with Fireball + Zap. I mostly use Fireball on defense but sometimes I throw in a prediction Fireball to kill my opponents Skarmy or severely wound their Barbarians. Your Fireball must be the same relative level or higher than the Barbarians or Musketeers in this deck. It plays a big role. This card is replaceable with The Log if you want to.
Related topic: Best Tips for the Fireball

Wizard – Your The Runner (nice grammar right there). The Runner is a card that you use on defense then turn into offense, supporting it with other cards. Most of you have probably a low-leveled Wizard due to the fact that he isn’t that good in the current meta. But he works perfect in this deck! Upgrade your Wizard so that he can one-shot Minions where you are on the ladder (so that they are the same relative level).  Wizard is not used in the Trifecta but I feel like he’s the replacement for Valkyrie due to they high splash damage they share. You can not replace the Wizard due to the fact that he’s a part of the Trifecta.

Skeletons – Your versatile response card. Not much to say about these three fast, very weak melee fighters. Use them to distract any type of P.E.K.K.A coming at you. Or to surround you enemies with this pile of bones!. Any level Skeletons will do the job as they mostly used to distract your opponents’ heavy-hitters like Prince Mini P.E.K.K.As. Ice Spirit + Skeletons is my favorite combo to deal with Hog Rider when I don’t have the Inferno Tower ready. Skeletons were used in the Trifecta. You could replace them with Skeleton Army, Goblins or Guards.

Zap –  Your spell (your spell slot in the deck). The most popular card in the whole game. Stuns your enemies for 0.5 seconds and dealing damage to them. Excellent to kill Minions and Minion Hordes with on your side and on your opponents side with the support of a Princess shot. Perfect against Sparky, Princes and Inferno Tower. Zap was used in the Trifecta.

Play it slowly and defend yourself. Don’t get greedy! Make small pushes to chip their tower if needed. Wizard is one of the best defensive cards in the game and he’ll take out Barbarians with ease. In 2x elixir launch a big, big counterpush with all you got! Wizard, Lumberjack, Hog Rider, Ice Spirit, etc.

Guys, that’s it for my guide. Hope you all have a good day! Comment if you need any help or advice.