Hey fellow citizens of clashroyalesville, Sage TheBatman here with yet another deck. Tell me this!! Did any of you guys started losing every single game after the latest balance update just because the deck in which you had expertise was heavily nerfed in every dimension?? If yes, then I know how you feel mate. If not, this deck will still help you. So without further ado let’s get started. 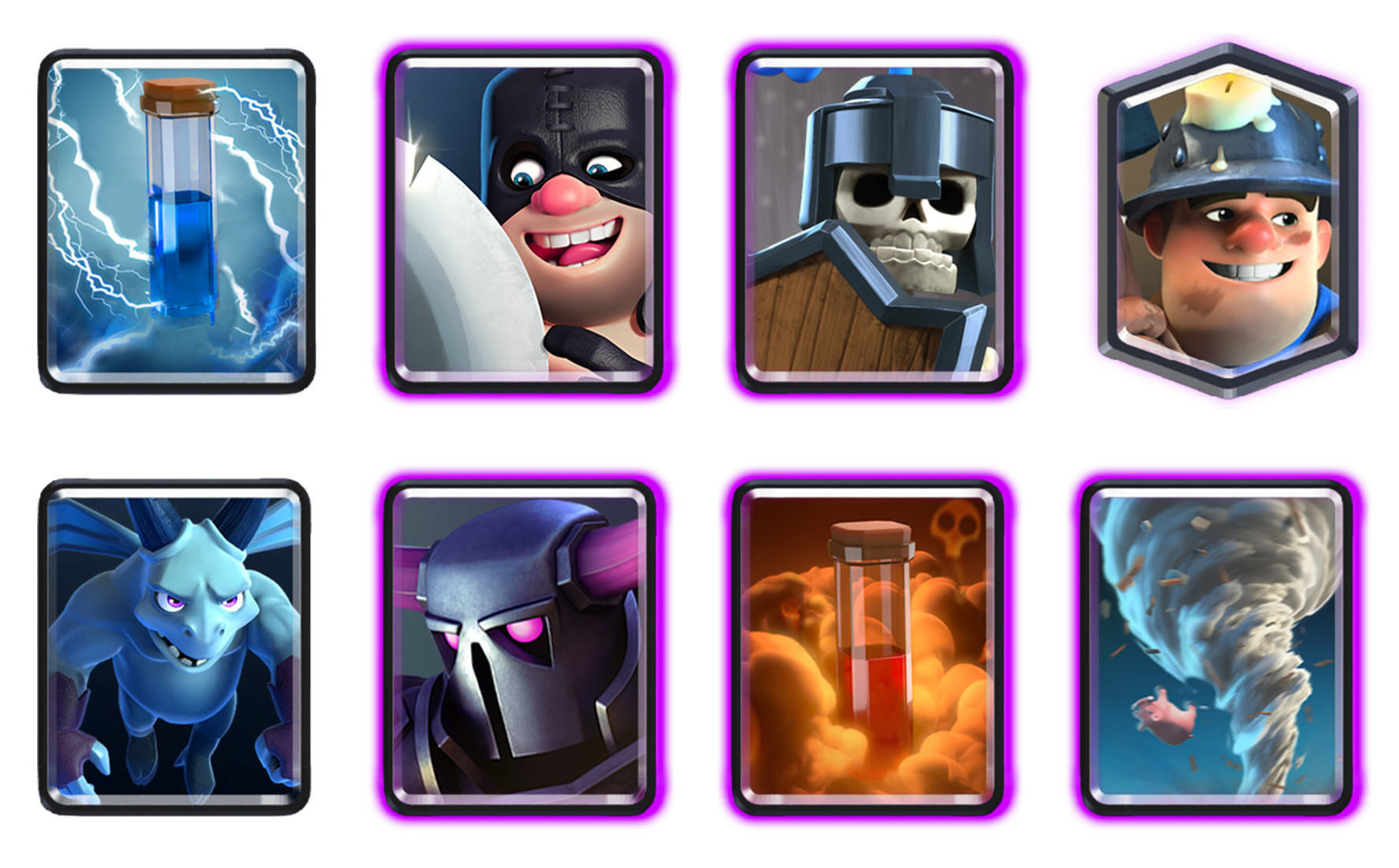 I would like to add this deck to the category of Pseudo- Beatdown since it has P.E.K.K.A. but not as a win condition, but as a defense which, if required, can be effectively turned into beatdown push. On the other hand this deck is also played as miner-poison chip cycle. In this deck, nearly every card has offensive ability, even guards, about which I will talk very soon in this guide. For now, let me just explain in plain and simple terms. Defense is pretty strong with P.E.K.K.A. to take care of tanks and exenado to take care of swarms and guards for the situation as and when needed.

I very great thing I found about this deck is that every card and I mean each and every card including spells has both offensive and defensive capabilities(except for Miner who is strictly for attacking purpose but if the situation comes to so, close your eyes and use it on defense. So the description of every card is as follows:-

In all these situations, a wizard fails and leaves you defenseless in a dire situation, which if you use tornado, might barely pull you out of situation (considering your wizard survives till then i.e.). An executioner not only takes care of support while destroying tank, but it also synergies the best tornado, more than any other card(close second is sparky)

This deck synergies extremely well with each other and a push can be easily formed with a combination of any two cards. Below I will mention about such pushes and give details about its use and when to use:-

This is the part where I give you step by step explanation of what to do at what time and how. Since i have explained quite a lot in the above sections, so this section would be rather small. So let’s get started:

During this 1 minute time span, your job is to assess your opponent’s deck. Make a note in mind of what your opponent uses to counter your simple miner minion pushes. Since this deck has a natural affinity to creating a mini push every 20 seconds, so you can keep your opponent on his toes quite consistently and not give them chance to pressure you. Just remember to not waste elixir and do positive elixir trades. It will be hard just cope up with it. Even in this starting minute you can deal quite a lot of damage to the enemy tower since creating a miner push is very easy. A miner guard push requires 6 elixir but countering it definitely will require more than 5 elixir which will eventually put you in small advantages here and there. I do not want to pull this section any longer since I have explained pretty much everything here, so let’s get to next part.

During this part, create constant pressure by making miner push every 20-25 seconds and spend the rest of the time defending. Defending is really not hard at all in this deck as you can turtle up pretty easily if the situation requires you to do so. Just remember to always have a backup plan and never be on 0 elixir. Zero elixir is the most insecure point at which you never want to be unless you use a hog chip cycle, and apparently you are not using it right now. Always keep atleast 2 spare drops of elixir in hand at all times since you don’t want the damage on your tower although you have the ability to catch up for it but why risk eh? But during this period, it is quite common for you to find opportunities to create a counter push. While I would normally say “hold your horse’s mate” but sometimes I would say “let em’ run”. Now this depends on the conditions when you are atleast 3 elixirs ahead then feel free to push even so soon. You might actually get a tower. I get towers every now and then like this, so will you. Main pushes are miner+ support and once in awhile P.E.K.K.A. executioner pushes.

This is the part where it all gets interestingly interesting. The speed with which you cycle miner and poison is very fast. Followed by constant executioner tornado combo defense and a P.E.K.K.A. in front of them, your opponent has to think fast or he will be overpowered soon. Once you find out your opponent’s counter for your troops, it becomes easy to predict and overpower them. Just remember that your opponent can also cycle fast too. Don’t get carried away. Main strategy is to “defend once and attack twice”. First attack should be the counter attack and second should be another fast attack, not letting your opponent gain the upper hand. If you can manage this, then it is gg. Defend against tanks with P.E.K.K.A. and use exenado to take care of support plus swarms. Easy as that. Once any of them survive, use them to create a fierce counter push by dropping miner and guards. The value increases exponentially whenever a miner acts as a tank, since it demands quick response or high damage, both of which are useful for us.

If the game reaches this part, then this means only 2 things, either you are on the verge of winning, or sadly enough, losing. Remember to clear your priority and fight accordingly. If you feel you can win, chip at him with miner poison and go all out in last 20 seconds. This will get you the crown if you deserve it. If you are losing, turtle up, and I literally mean turtle up. Defending with this deck is so strong that, if your opponent doesn’t have rocket, then you can defend 500 hp for full 2 minutes with relative ease. Just remember to never leave the tower unguarded because a princess of a dart goblin can always wreck your plans. Use pekka for tanks and exenado for swarms. Moreover, bring minions and miner to the defensive arsenal as well. But do this only if you are 110% sure you cannot win against him by any chance.

This deck in right hands can easily obliterate any push ranging from extreme ground golem pushes to all air lavaloon pushes. I will explain all the situation and solutions below:-

These were all the main situations I could find till now and this much data must be quiet enough for any sort of push. This deck requires practice

This game is all about overthinking and outsmarting your opponent with a combination of cards that leaves him with no choice but to lose and this deck is the one guys. Give it a try you will love it once you get a hang of it.