Today I will be introducing a really unique Sparky Zap deck which I randomly tested out.

This deck is really good for ladder, duo do its ability to counter many popular win conditions that are very popular right now. So without further ado, let’s get to the deck! 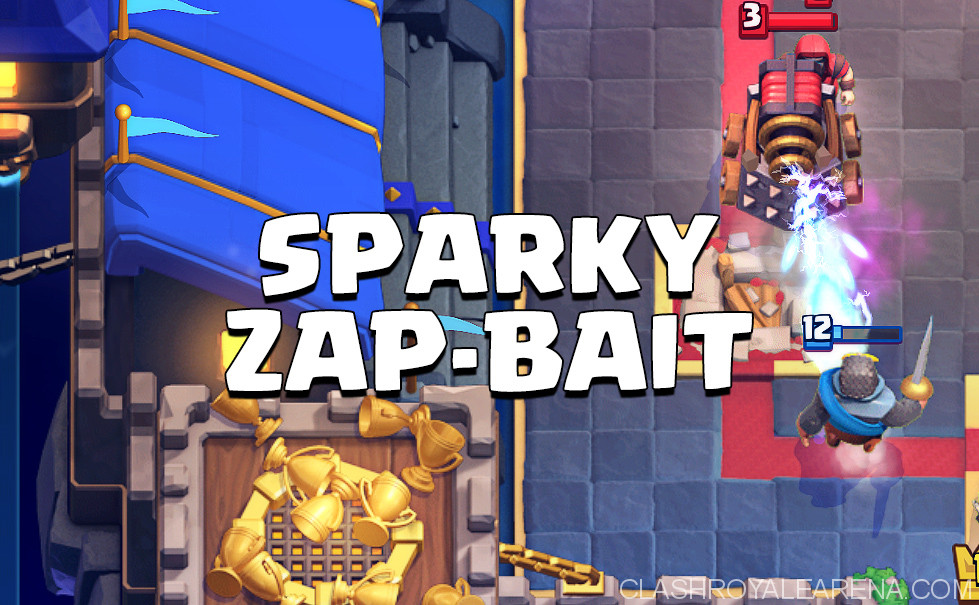 Giant – Despite being a spell bait deck, Giant is your main win condition (Sorry guys)

A must have in a Giant Beatdown deck but he plays a very important role in this deck, he’s your tank. Your man goal to slow a push by placing him in the back but throwing him in front a bunch counter pushing troops isn’t a bad idea either.

Throughout the match you should be you should be looking for counters your Giant as well as to your card and keep track of them so you can capitalize on them later.

Heres and example: I have already taken a tower. I notice that my opponent just used there Inferno dragon and Zap. I have Giant, Ice Wizard, zap, Goblin barrel in hand. Knowing that he doesn’t have a good counter to my Giant or any of my swarm troops, I place my Giant in the pocket along with a Skeleton Army and a Goblin Barrel.

Do you see? Not only did I keep track of what my opponent had used, I punish him for using it.

This is how your going to win 90% of your matches so I hope you understand!

Ice Wizard – When in doubt, use the Ice Wizard.

This dude is an amazing on defence allowing you to counter swarms, glass cannon and melee troop from a far thanks to his long range and his cheap cost of only 3 elixir!

This guy is should be your go to defensive card, used to deal this the majority of your opponents push.

Do to his health and his ability to slow opposing troops down, he is outstanding counter to the Royale Ghost on defence for a neutral trade.

Use him wisely as he is very important on defence being one of your two defensive non swarm troops.

This is the key card to baiting out spells so your Sparky, Horde or Skarmy and run ramped on the field.

Send em out before defending a push to either get great damage or bait out there spell allowing defending to be super easy.

Despite not being your main win condition, it is still a semi-reliable damage dealer.

Many people say that Sparky is still terrible despite the massive buff, I would disagree.

Sparky adds a bait element to this deck which makes it very unique.

She constantly keep your opponent on their toes, forcing a reaction or the’ll substance massive damage.

On defence you want to force your opponent to use his spells be able to play Sparky, Horde or Skarmy without risk.

Place her behind a Giant and pair it with your swarm troops for an unstoppable push after your opponent has used their spells.

Know your opponent has a defensive card that counters swarms (Executioner, Wizard, ect)? Throw Sparky into the push and not only she bait spells, if left allowing she’ll take out their defending troops

Use this card to bait out maybe a Fireball, or Arrows etc. Giant + Minions push usually draws out there light spell so if they lack a spell like Fireball or a splash unit it’s a green light to play your Minion Horde.

On defence, these guys work great but if your opponent uses their spells then you Minion Horde can dominate!

Keep track of your opponents counter including their 1, 2 two counters like Ice Spirit + Zap, Ect

Nicknamed Punish Horde and for good reason too!

This swarm of Minions can dominate the battlefield after your opponent has used their counters.

Pair them with Giant for a powerful push after your opponent has used their counters.

You should refrain from using them offensively if you opponent hasn’t use their counters as this will just be a massive negative trade.

These guys are amazing on defence and almost always bait out some form of spells or splash damage troop, and if you haven’t caught yet, you want to capitalize on this mistake!

Despite being a defensive card, if caught without a counter, Skeleton Army is super threatening, bragging of being the highest dps card in the GAME! So don’t be afraid to place this card along with Giant in the pocket to pressure the opponent.

Just make sure it won’t end up in a massive negative elixir trade.

Use it wisely as serves multiple job like clearing swarms and resetting attackers.

This is not deck you want to rush thing, don’t try out cycle your opponent, don’t try to cycle to cards in general.

Play it slow in single elixir, don’t go to aggressive.

During this time, try to figure out your opponents counter to your Minions/Horde and their spells.

Keep track of their counters and constantly use your Goblin barrel when ever your at 10 Elixir.

If you notice your opponent has used one of his/her counter to your Minion/Minion Horde, punish them!

By Now, hopefully you have done two things:

Now it’s time to play more offensively. Now you should constantly be throwing Goblin Barrels try to bait out their spells to enable to you to play your ‘Spell-able’ cards on defence along with offence. It’s important that you that start getting damage early because without a heavy spell, it is difficult to get damage.

You should start being really aggressive now, making Giant pushes often but not being suicital with them going all in only to be flattened on the counter push.

Constantly throw Goblin Barrels, try to get chip damage and bait their counters.

Use Sparky aggressively whether its on defence or offence she will be able to get loads of value if used properly but play here smart!

If you know your opponent has Rocket don’t play her next to your tower! Same with every other spell, don’t give them value!

9/10 games your going to win from baiting out their counters to one of your cards allowing you punish them and finish of the tower.

Instead of match up i’m going to quickly go over the mind set your going to want to have while playing this deck because as a bait deck, it is very important.

On defence you want force your opponent to use his spells to be able to play Sparky, Horde or Skarmy without risk.

There is a bait element, but your end goal here is to get your opponent into a position where they have no good counters to you Minion Horde or your Sparky behind that Giant and then crush your opponent.

Try to keep track of there counters to your Minions so you’re able to punish your opponent after spending them.

Keep track of their 1, 2 combo counters that are able to counter your Minion Horde because once one is used BAM!

As I said probably 100 times in this deck guide, your able to punish your opponent.

Well that’s all guys! If you have any questions about the deck or certain matchup feel free to ask it down in the comment section below! – Cow FTW