This series is gonna be all about showcasing some cool Hybrid decks that you may want to use for Ladder, Challenge, and Tournament play.

Today’s deck is going to be a really cheap Hog Mortar deck that excels in Challenges! 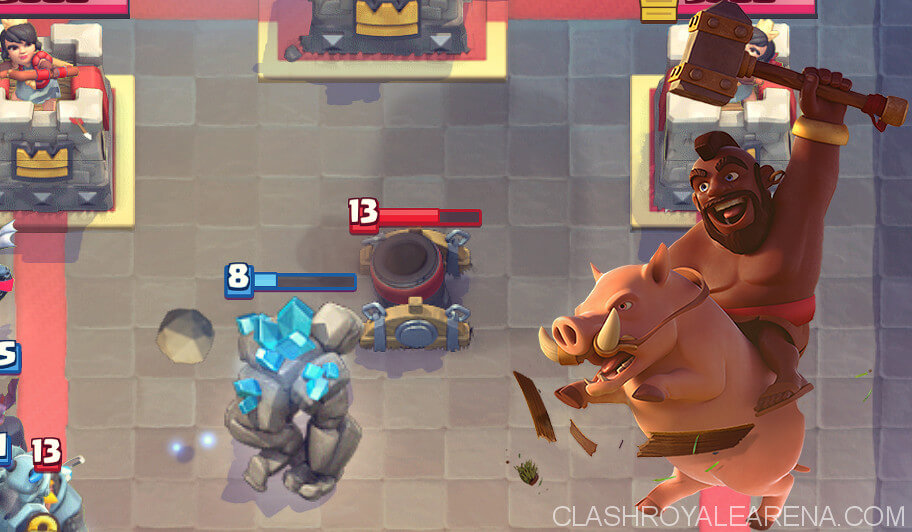 Before I get into the guide though, here’s some things that you may need to know about Hybrid decks.

Hybrid decks are a deck consisting of cards from two different archetypes. Most have more than one win condition.

Here are a few examples:

Now, we get to our feature deck, the Mortar Hog!

He tanks for everything here, and what a good tank he is!

His sword gives him the same attack power as an RG of equal level (haven’t I stressed that enough?), and he also does great damage to many glass cannons like Executioner.

He also counters other mini tanks like Valkyrie and the Elite Retards quite well too.

On offense, he is a force to be reckoned with, and thanks to Oh Long Johnson, we all know the final result when we ignore him!

He followed the echoing call of “Hog Rider!!!” all the way through the Arena doors.

This thing has so many uses here! It can pose as a second win condition, a defense building, and can even be placed to deal with Pumps (they need to be in a certain spot in order to do this)!

If you do use it on offense, like with any Siege deck, PROTECT IT. Otherwise, use it as you please.

You can use the Mortar’s dead zone to your advantage by getting a tank in there so the Mortar can attack support, ground swarms, or even Arena Towers.

These gals are very expendable and can be used in (almost) any situation.

They survive Zap, Log, and Arrows with a sliver of health left, meaning that the opponent will have to use a Fireball or Poison to take them out fully.

They can clear small swarms, take out mini tanks, and even be used to defeat Golemites or Lava Pups as well! Splitting them behind the King Tower as an opening move is a very good idea, as it doesn’t force you to commit to one lane.

Their cheap cost means that you can get a ton of value out of them if you use them to defeat a Goblin Gang, Skarmy or even a light Hog push!

Arrows are great for this deck because they are capable of one shotting common counters to Hog that also survive Zap (i.e Goblins, Minions) and air swarms that are impervious to The Log.

Minion Horde will be no match for them! Just watch for Inferno Tower!

They have a decent DPS, and are easier to claim and upgrade rather than other, more unconventional choices like Guards, as well as classic choices like Bats.

His role is mostly self-explanatory.

He is used for cheap cycle and to freeze foes.

This flying fiend melts through every single tank, sending a fiery beam of flame at them!

You can even use him on the counterpush!

In dire defensive situations, he can be used with Ice Spirit and with Mortar to help keep tough tanks like Golem and MK away from the Arena Towers.

Probe the cards that your opponent may have.

Keep careful watch when a tank, win condition, or threat card shows up, as you will definitely want to keep your defensive cards in cycle for their push.

Mortar works great as a surprise card, and can actually make for a pretty deadly light push in this phase if protected!

However, if a heavy tank is placed in the back, then use your Mortar defensively in the center, as tanks will be kited.

Use the Hog whenever you can.

This is when you should be unleashing your Hog Rider ASAP.

He is your sole source of damage in this deck, with Mortar being a secondary win condition.

Place Mortar one tile away from the bridge a lot to maximize the protection potential of other troops.

Continue to cycle Hogs and Mortars until you win.

In this match, you will want to use the Mortar defensively, and the Hog should be your win condition.

Place Mortar in the center so both Arena Towers can target it.

Use Goblins or Knight on support and Inferno Dragon to kill Giant. Use Ice Spirit to freeze if necessary.

If you treat it like a Giant, then Golem isn’t as hard as it seems.

Center placed Mortar is always a good idea, and you will absolutely need your Inferno Dragon, so make sure you have it!

Against Night Witch (the popular choice), use Knight on her, then kill the resulting Bats with Arrows. Use Knight+Goblins on anything else.

Against the Pump, if it is placed near the King Tower, use the Hog to take it out (if you feel confident about the cycle potential of the deck).

If you do so, though, make sure you get another Mortar in an offensive position ASAP!

Unlike a Giant or Golem matchup, you cannot use your Knight on support because P.E.K.K.A will kill it immediately.

Center placed Mortar is, again, a good idea, as it is capable of attacking the support if P.E.K.K.A is in the dead zone of the Mortar.

Be sure to freeze her with Ice Spirit so she will be focused on the Mortar, allowing you to Knight support. Be sure to use your Inferno Dragon to kill P.E.K.K.A!

Just like all the other tanks, use a center Mortar to kite the Hound, then kill it with Inferno Dragon.

If there is an opposing Inferno Dragon or Balloon behind the Hound when it dies, Arrow the Pups so the threat can be attacked immediately.

Use Ice Spirit to freeze or Archers if necessary.

Since most RG decks are relatively easy to punish against, it’s OK if you take a little Tower damage.

Once he crosses the bridge, place Inferno Dragon 4 tiles away from the bridge and to the SIDE. This makes splash units like Witch susceptible to Knight, giving you an advantage.

Use Mortar to punish afterward.

For any Elite Retards, use Knight+Goblins.

Use Ice Spirit on the RG or its support if necessary.

ONLY use center Mortar against him as a last resort.

One of the only decks where we don’t have a hard counter to the win condition, the 3M.

Against them, place Mortar in the center so it can get some damage off on the two Musketeers (if split).

Then, Arrow the two Musketeers and finish off the other one with Goblins.

Against the mini tanks, use Archers.

Lucky for us, we have three (four if you count Arrows) to the Graveyard.

Against it, use Knight, Goblins, or Archers.

If there is a Freeze or Poison, use Knight+Arrows.

Goblin Barrel will be your prime target for your Arrows.

Against other Bait cards, use Goblins, Knight, or Archers.

Make sure you bait the Inferno Tower with Mortar, then punish with Hog afterward.

It’s your lucky day if you’re against this deck.

We have Knight and Ice Spirit, all of which hard counter Miner.

This deck is also relatively cheap, so you don’t have to worry about getting outcycled.

Then, use Inferno Dragon to kill the tank.

Use Goblins or Archers on anything else, and Ice Spirit to freeze if necessary.

She deserves her own special place here because she is a BIG threat if this deck if played improperly.

Now, most Sparky decks have a larger tank, so kite that tank, whatever it may be, with center placed Mortar. Then, place Knight in her blast zone, and place Goblins right after she shoots.

If all goes well, Sparky should be dead, and your troops proceed to the tank to kill it.

Worst-case scenario, the Goblins are placed too early, and Sparky obliterates everything.

If you have to, use Ice Spirit to freeze things.

Also note that Mortar may attack the Sparky if the tank is in the dead zone.

So that’s all for a great start to my deck series! Leave a comment if you enjoyed, or have other amazing Hybrid decks to suggest! See you next time!