Hello everyone! Its herro here back with a new deck featuring an underused card, freeze! This deck has a unique playstyle but has the basic mortar siege features in it. I have tested this deck in 4k, challenge, and friendly battles with great success. Also works great in 2v2! Without further ado, let’s get to the deck! 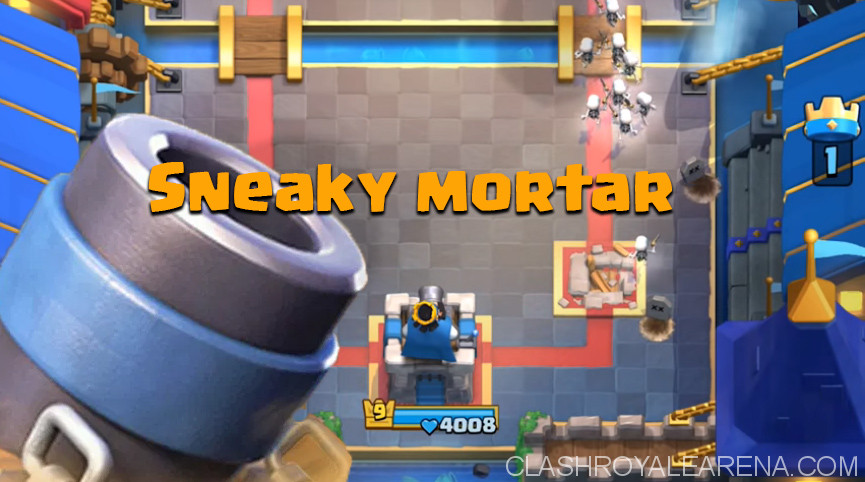 Mortar: Your standard defensive and offensive card. Mortar is used for its good chipping capabilities and its high range. Mortar is also pretty decent on defense as well so don’t be afraid of defending with it!

Princess: She has long range, splash, and a cheap cost of 3 elixirs. All around the great card for defense and chip. Use her to support the mortar from swarms!

Inferno Dragon: The inferno dragon is your most reliable defensive unit in this deck. He’s great at shredding high hp tanks and is really annoying to deal with. Not much else to say about him!

Knight: One of the best cards at the moment. He’s a great mini tank and is great at making positive elixir trades. So far, he’s never fallen out of favor in the meta!

Ice spirit: Your one elixir cycle, chip, and utility card! He can buy you enough time to get a juicy mortar shot off or stall the push just enough so you don’t take damage. All around great card!

Freeze: Ahh the classic freeze cheese. Freeze can be unreliable due to the fact that freeze itself does no damage and there is almost no way to get a positive trade with it. Though in this deck that shouldn’t be a problem 🙂

Zap: I feel that this deck works better with zap than log because zap is an instant cast card. If you feel otherwise, feel free to try this deck with the log!

Graveyard: The yard of bones is your main win condition in this deck. Rarely do you ever use it on defense? Graveyard got changed a bit so I recommend watching OJ’s video on the graveyard change.

With this deck you want to make positive elixir trades, a chip with the mortar and wait till the very end. At late game, you want to put down graveyard (with a tank such as a knight) and freeze their troops that can defend graveyard. Throughout the game, keep track of your opponents counters and their cycles. If done right, the wins should be rolling in. The element of surprise is in your favor as you use this deck. Just be careful about freezing and graveyard before late game.

Figure out your opponent’s cards and his deck type. Try to make positive trades and keep chipping with your cards. Make him believe you have a pure mortar deck with no freeze cheese 🙂

Double elixir is when you should make your move if the tower has at most 1200. Start by defending or push with the knight. Then throw the graveyard at the optimal position and freeze the opponent’s counters. The element of surprise helps a lot but will only work once. If the push fails to secure the tower, you will have a hard time getting through. If you do succeed, turtle up and defend until 0.

If you hit OT and you haven’t used the frozen yard, do it. If you already did but it failed, just try to make an all-out push if you are winning in tower hp and elixir. If you are losing, you can turtle up and just defend for the draw.

Golem beatdown: Golem can be difficult if they have lightning. But since the lightning radius nerf, golem should be a lot easier to deal with. If the opponent drops a golem, you should defend by putting a defensive mortar. This matchup will most likely end up in a draw, but if you play right you shouldn’t lose.

Giant beatdown: giant beatdown is different from golem as the tank is lighter and cheaper. In a giant matchup, you should play more aggressive and defend only if you think you will get overwhelmed. Should result in a win or draw, never a loss once you practice using this deck.

Hog cycle: Hog cycle is annoying as the opponent can cycle hog as fast as you can cycle mortar. You will have to play aggressive and try to outcycle the hog with good trades. Hog matchups are more based on how well you know how to play the deck than outright matchups.

Graveyard: You have your mini tank and princess. Defensive mortar if needed. You should be fine in this matchup.

Bait: You have plenty of ways to deal with bait. Just remember to save zap for the goblin barrel. Defensive mortar if you are getting overwhelmed by the spam.

Other mortar decks: You have something other mortar players don’t have: this guide. lol jk, but in a mortar matchup, you will have to distract, destroy, and counter push. Distract the mortar, destroy it, and counter push with your own mortar! Inferno d helps a lot, but be careful about electro wizards.

Tip: in 2v2’s don’t use mortar for the chip. Use it for defense. With 20 elixirs in the enemies hands, your mortar will have a hard time locking on to the tower.

That was my guide for today folks. Hope you guys find success with it and happy clashing!