In this guide, I’m going to outline how I approach deck building, tweaking, and evaluating. I’m not a master, so feel free to let me know in the comments what I’ve missed! It’s general enough that almost all decks should fit under the guide, but some decks may not. 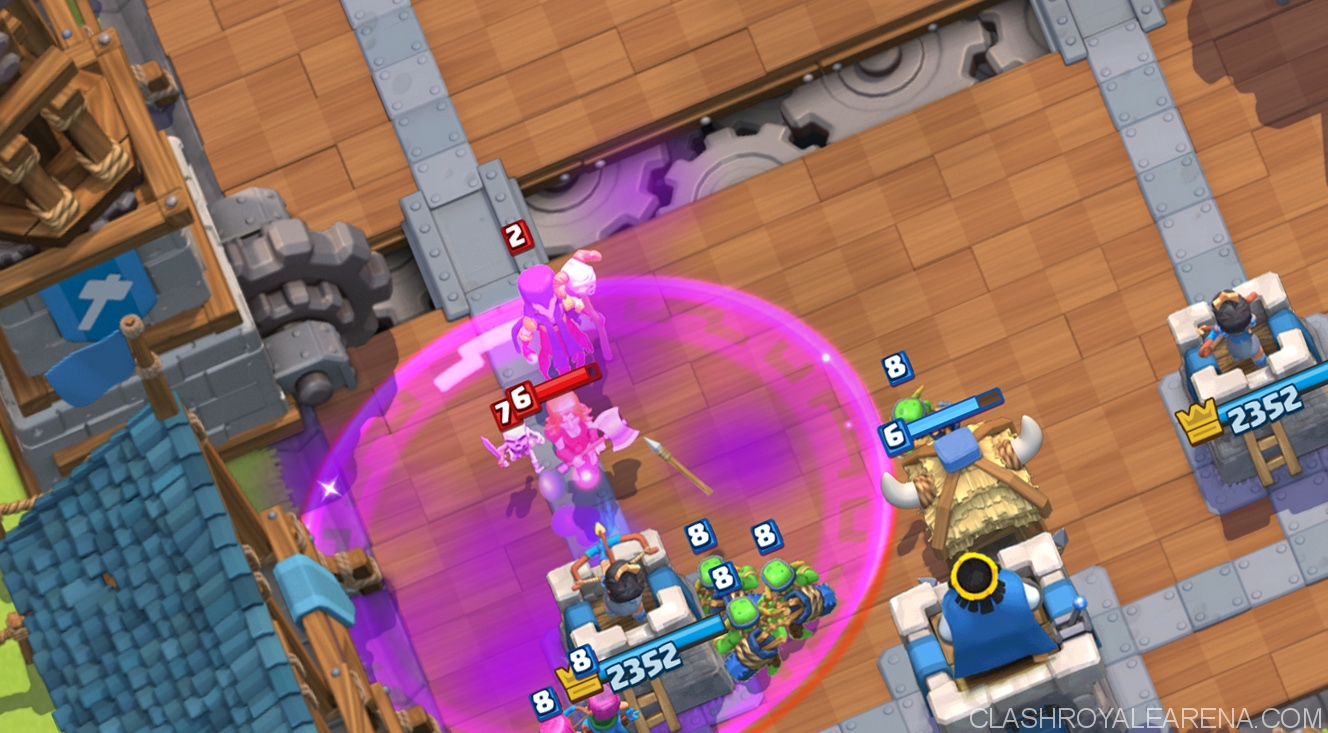 The Slot Method for Deck Building

With that being said, let’s get to it!

If you would like me to analyze your deck in the comments, feel free to write it out!

When you read about decks, they’re called “Hog Cycle”, “Miner Cycle”, “RG Beatdown”, “Golem Beakdown”, “PEKKA Double Prince”, “Giant beatdown”, “Mortar Siege”, etc. Each deck has 1 singular card that characterizes how the deck is played and what its win condition is.

That’s the card in this slot. The play maker. The tower taker. The rage-quit inducer. This is the center of your deck, and it determines which archetype your deck fits into.

This slot is the secondary win condition card. This card supports the main pusher in such a way that the win condition is enabled.

When you think about the main push of your deck, this is the card that you’ll put down with your main dynamic card.

For example, this could be Musketeer with Hog or Giant; Dark Prince with Prince; Sparky with Giant; Mini Pekka with Miner; Goblin Hut with Barbarian Hut; or 3 Musketeers with Giant.

This slot is win-condition push support. When you are going on full offense, you’ll drop down this card to get your push to the tower. It doesn’t always have to be a troop—sometimes it is a spell (poison, zap, arrows).

You’ll see a lot of splash damage in this slot, as it clears out cheap units that can take out tanks quickly. Bomber, Wizard, Fire Spirits, and Princess all fit in here.

You’ll also see high DPS troops who’s goal is to get damage on the tower, like Mini Pekka and Musketeer.

This is the first of 2 defensive slots. You’ll use this card to handle enemy pushes and minimize damage on your tower. This is the main “wall” that enemy pushes will run into.

Cards that fit in this slot are defensive buildings, Minion Horde, Valkyrie, and Mini Pekka.

This is the second defensive slot. These cards will support the action of your main defensive card to stop pushes faster.

Cards that fit into this slot are Ice Wizard, Ice Spirit, and Baby Dragon. Your options aren’t just limited to these cards; most decks also pick from the list above for this second defensive slot.

This slot can also be used for an Elixir Collector. It doesn’t help on defense, per say, other than providing extra elixir to stop pushes with.

This is The Runner. This slot is both offense and defense: you can start this card on defense to stop a push and transition it easily into an offensive push. They’re efficient, and you can use them solely for offense or defense if necessary.

On the other hand, you can also drop these guys behind a big push. If you have the extra elixir, they can support your main push and make it even more powerful.

You want to pick these guys carefully because you want to be able to play them anytime and get maximum value from them. If they don’t target air, you may be caught off guard during an air attack—so you’ll want air-targeting defensive cards or an air-targeting Runner.

This last slot is the spell slot. Not all decks carry a spell, but almost all do. This is the slot where you can put your spell.

I know Goblin Barrel is a spell, but I listed it in Slot 7 because it functions more as a versatile response than a true spell.

As you can see, it doesn’t perfectly follow the guide above—but it generally does. The main exceptions are in Slots 3 and 5.

Strictly speaking, Slot 3 is normally a troop, but it can also be a spell. If there are more than 1 spells in a deck, that’s why. One or both are mainly used to support offensive pushes.

This deck doesn’t run a true “defense only” second card, but an Elixir Collector in Slot 5. The reason the deck can get away with that is because Valkyrie is a classic Runner: it can be used on defense and then transition well into offense.

This deck (from Chief Pat) fits the guide really well, except for Slot 6. There isn’t a true “Runner” in this deck, but you could argue that Mini Pekka and Ice Wizard both fit that role, since they will eliminate enemy pushes so well.

This deck fits the guide really well. The only exceptions are for Slot 3 and Slot 5, which I already discussed in HOG TRIFECTA.

This deck (from Galadon) has a solid core, filling the main slots. However, Slot 2, Slot 3, and Slot 7 can be interchanged.

This deck is basically arrow-bait, with support cards that can be interchanged with each other. It doesn’t fit within the slots as well because of how versatile it is: no card is fixed in one role.

This type of deck is powerful because you aren’t forced to play half of your deck in any one particular way. You have room to be flexible and adapt to your opponent.

’s post) is flexible, like the GOLEM BEATDOWN deck above. You could argue to interchange Slot 2, Slot 3, Slot 5, and Slot 7 with each other.

As said above, this flexibility is why it is so popular in tournaments, where you have no idea what you are going to face.

This deck (from Molt) fits the guide well, except for the supporting cards. Slot 2, Slot 3, and Slot 7 can be interchanged.

This deck is an example of one with a strong core and flexible support cards.

) is a great example of a flexible deck. Slot 2, Slot 3, Slot 6, and Slot 7 can arguably be interchanged.

These examples show that the very best decks are those that don’t stick rigidly to this guide. Use it as an example of how to build a deck, but don’t be afraid to mix things in so you are able to adapt to anything and be flexible.

Ok, so you’ve made it this far and want to know how to test decks. First things first, don’t rush building a deck. Think carefully about what cards you want, and start in order of slots. You’ll pick out your win condition and offensive support cards first, then pick defensive cards.

Once you have a deck, find someone in your clan around your trophy level. Play them a few times in friendlies and get a sense of how your deck performs. Ask them to play different archetypes, so you see if your deck is strong against, say Giant/Guards, but weak against Trifecta. Play more than one person, if possible.

After your friendly battles, tweak your deck. You can swap out cards for different things and see what works best. I tend to swap out supporting cards most often (Slots 2, 3, 5, 6, and 7), and I don’t generally swap out more than 3 cards once I’ve built a deck.

Once you have gotten your deck tweaked, play with it in a tourney. Don’t focus on changing your deck while you’re in the tourney, just play and try to win.

After the tourney is over, then look back at your battle log and see what you’ve won and lost against. This gives you valuable feedback on the strengths and weaknesses of your deck.

Once you’ve done all this, your deck is ready for the ladder! Play with it and continue to tweak as necessary, but don’t tweak continually. If you like your deck, don’t change it because of a string of losses. Take a break and come back later, and then see if you still need to change it.

That’s all I’ve got, thanks for reading! 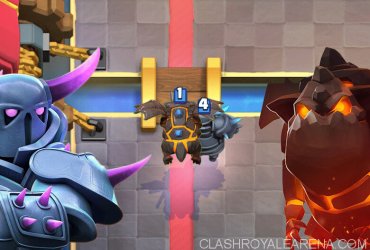 Hello CRA (and hopefully Stormies(my clan)!), I am ReaperofSouls, but everyone just calls me Reaper. I generally chill around 4k trophies (Low Challenger I), but that’s mostly because I spend … 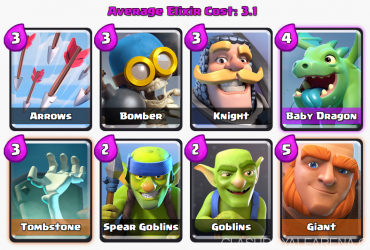 As I have been received a lot of requests for Arena 3 Deck that doesn’t require Prince, today I’m going to introduce with you a nice deck which has a …