Hey everybody, Pete here. Thanks for coming and checking out my deck. Today I wanted to talk to you about the deck that “Sparked” my way to legendary – I call it “SLOP”! I created SLOP! When “BestManEver” suggested I make a Sparky deck for him in the comment section of my Boomyard deck guide. Sparky has lost some love in recent meta’s, but I think I found the deck to bring Sparky back to the place where the grass is oh-so-green… Legendary arena!

Before we get into playing “SLOP”, let’s break it down card by card! 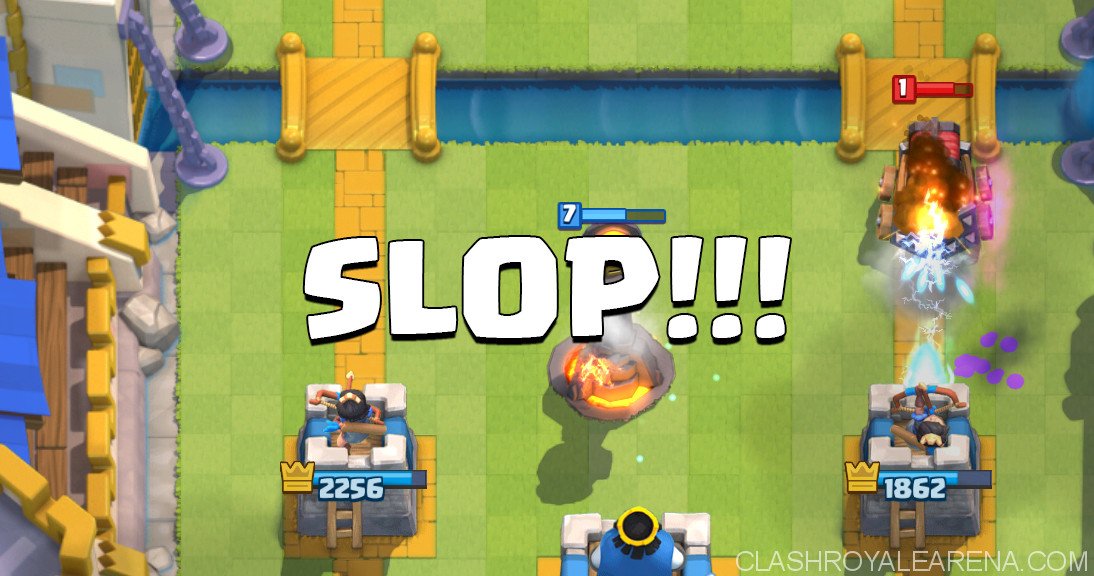 Actually, you’re probably wondering why I named this deck SLOP! Well, it’s because it feels so sloppy to play! Slow awkward Sparky and slow awkward Goblin Barrel and Slow awkward Royal Giant… It’s pretty darn sloppy. So let’s get into SLOP! I want to let you know that I try to break down my decks by silo-ing the cards into two categories: staples and complimentary/utility cards. Staple cards will not be changed out; they are a mainstay in the deck and pivotal to its effectiveness. Complimentary/utility cards can be rotated out to fit the meta.

So let’s get into it! First up are the staple cards. Again, these are mainstays in the deck and will not be rotated out.

Placement: Behind your towers. At bridge during the late game.

Can I just say that I feel gross playing Sparky? Sparky is such a hail-mary minion that you almost want to laugh when it connects; it’s so darn slow and awkward, but my God is it destructive!

I’ve usually only seen Sparky played one way: You drop her behind your tower…throw a tank in front of her…pray your opponent doesn’t have the resources to stop a blast or two. In this deck, Sparky is quite flexible!

Sparky can also be used on defense, typically behind your tower. Sparky is completely useless against aerial opponents, so make sure to deploy some protection!

Placement: Left or Right bridge. Can be used to soak up damage from an enemy push.

Great pressure card. Your opponent typically has to use a good amount of resources to eliminate Royal Giant. Can be used on his own but is best used in tandem with Goblin Barrel. Best to protect Royal Giant with arrows/zap from air minions. Currently, the meta is light on single target towers/minions (Mini-PEKKA, Inferno Tower, Inferno Dragon, ETC) so Royal Giant is able to get in there for a few good shots!

Placement: Opponent’s towers. Can be used on defense.

The second piece of the uber-effective Royal Giant/Goblin Barrel combo, I typically only use Goblin Barrel in tandem with Royal Giant but will use at the start of a match to cycle through my deck if I have no viable defensive options. Most players seem to target the middle of their opponent’s tower in order to get an even distribution of goblins, but it is also important to practice positioning depending on where your opponent is trying to place a defensive counter to your barrels (other than zap).

Do not worry about your Goblins getting Zapped! Your opponent has to choose whether to Zap your Goblins or Sparky – so make them burn Zap, one way or the other!

Wizard is one of those cards that plays like an Epic/Legendary but is priced as a Rare. Wizard will survive almost all removal of equal level (besides Rocket/Lightening) and can do massive damage if left unattended. Wizard’s fireball does splash damage to group minions and decent damage against single minions but is outclassed by cards like Mini-P.E.K.K.A, Musketeer, Knight, and Prince. If your opponent is aerial focused, this card can dominate by itself.

Where Wizard gets in trouble is the fact that his rate of fire is slow. So make sure to maximize your spacing or you will waste a costly 5 elixir.

A brilliant vanilla common card Barbarians can be used as a counter push, punish large tanks and Hog Rider, or as a meat shield for your Royal Giant and Sparky. Amazing stats for five elixir. Extremely flexible. Won’t die to removal (besides Rocket). One of the most balanced and versatile cards in the game. That said, Barbarians isn’t always a shoe-in. If the current meta is on the ground—this card is for you. If the current meta is in the air, you must look elsewhere.


Location: Anywhere on top of the enemy! Best to drop on your side of the bridge behind their tank and on top of the tank’s backup. Also best used in front of cards like Hog Rider, Royal Giant, and Giant since they don’t target minions.

It is incredibly weak against splash but is a godsend against everything else. Sometimes, if you’re lucky, skeleton army can help clear an enemy push and become its own counter-push!

Right now arrows is more versatile than Zap as it kills the princess, minion horde, and other bunches of small annoying creatures!

I hope you all enjoyed my write up on my newest deck! The deck is a lot of fun, different, and open to interpretation. Keep checking in as I plan to contribute as much ass possible. Be sure to follow me on Twitter @peterlivingston and especially my gaming YouTube Channel.