This guide will be about the Siege archetype but will mainly focus on X-Bow because that’s the one I am most familiar with.

Also a big thanks to UltimateLoser for helping me with editing and some other aspects of the guide. Without further ado, let’s jump right in!

Siege is an archetype, and also the general term for most decks with X-Bow or Mortar. However, Siege is actually versatile in the sense that Siege can be played as beatdown Siege, Cycle Siege, or Classic Siege.

Below I will give examples of each of these types of Siege.

Another great thing about Siege is that it isn’t so underrated as to become off-meta, but the great thing is not many people use Siege so a lot of the time your opponent will not have too much experience dealing with it.

The biggest enemy of Siege is Royal Giant. When I encounter and Royal Giant user, I always try to outcycle their Royal Giant. But if that isn’t be possible, I play for the draw, and also since I have Rocket in my deck, sometime I just defend and Rocket cycle.

However an even more dangerous matchup might be Hog hybrid. The best counter to Hog hybrid whether it be Royal Giant or regular Giant is cycle Siege, because you have to put cycle to your Inferno Tower twice as fast as your opponent.

*This guide will discuss Pure Siege and Hybrid Pure Siege, for you people who use Reddit terminology. I WILL NOT TALK ABOUT Royal Giant

Perhaps the most different from the other types of Siege, beatdown relies on using a tank (usually Giant) to defend the Mortar/X-Bow.

Beatdown Siege has mostly disappeared in the top arenas although it is occasionally seen as an off-meta deck. (Reddit: beatdown-pure Siege hybrid).

Cycle Siege (cycle-pure Siege hybrid) is arguably one of the hardest types of Siege to use along with Rocket Cycle (burn Siege).

This is a newer deck that derives from the original Rocket cycle-Xbow hybrid (Burn Siege) that I use and is better in Legendary Arena and lower due to the high presence of splash troops (sub Mega Minion for minions and Rocket for Fireball).

Mortar cycle is seen more commonly as Mortar is cheaper but has lately died out with the top players. The meta is gradually changing (I saw #198 using a sparky).

An example of Mortar cycle is this deck

Also known as pure Siege, Classic Siege was the cancerous Royal Giant of the post-global release period due to the X-Bow’s longer range, allowing it to be put behind a Tesla.

Classic Siege made a small comeback during the Ice Golem bug period (where the Ice Golem’s death would make everything around it invincible). Classic Siege is mostly seen in the form of hybrid classic Siege (burn-pure Siege hybrid). That is the deck I use.

Classic Siege in its pure form has been adapted to fit the needs of the newer meta and Pompeyo, the first grand champion used a newer version.

*Some of this terminology I made up myself and may contradict with canon archetype names.

Siege relies on careful plays to make elixir advantages similarly to control. However, it differs from control in the sense that you surprise your opponent with your unusual X-Bow/Mortar/Rocket.

During the beginning of the game, you want to play differently depending on which deck you have and which deck your opponent has.

Beatdown Siege would be played like any other beatdown deck except for the X-Bow / Mortar / Rocket, which I will get to later. Cycle Siege is played like a cycle deck and etc.

However, there are several aspects of Mortar, x bow, and Rocket that are unique to those cards.

One other very important thing about X-Bow and Mortar are where you place them.

The advantage of this placement is you can place troops next to the X-bow/Mortar and it will distract your opponent’s troops.

The disadvantage is if your finger slips more often than not you will end up putting it out of range on the outer tile.

However, if your opponent is not extremely experienced with X-Bow/Mortar, they might still try to defend it.

Another placement is the “center placement” where you put the X-Bow/Mortar 1 tile from the river.

This placement is extremely similar to the normal placement but it is better for novices as there is less room for error.

The disadvantage is that tanks will target the x bow/Mortar where as with the normal placement a well-placed Inferno Tower will pull the tank and ground melee troops.

Finally, if I can’t put anything in those spaces (e.g. Just finished defending Lavahound/Royal Giant with crappy Inferno placements), then I put it at the river and towards the center of the arena.

Tip: The arena tower will flash while you hold down the X-Bow/Mortar before you deploy it so this is a good way to tell if the range is enough.

Some Tips on Using Rocket


Not much I can say here, just a few tips.

The number one biggest thing that all successful Siege players know is this: (and I’m putting it in bold) Defend And Counterpush (well Siege cards can’t exactly “push” in the general sense but you get the point).

This is the power behind how Siege is so successful. Now let me explain what this means.

Starting out the game, I always say “good luck” (because I’m not one of those BMing Siege players that give us a bad name) and quickly check my starting hand.

From personal experience the best starting hand would probably be Inferno Tower, Rocket, Ice Spirit, Log and maybe X-Bow as the next card (because those are my best defensive cards plus Rocket for emergency).

Basically, you want to start out with a strong defending hand.

If I have the X-Bow or it is next in my card cycle, I usually drop either Ice Spirit, Skeletons, Mega Minion, or a combination in the back then put down the X-Bow.

At this point your two worst fears are:

Now, I know doing this right off the bat might seem stupid because you’re investing in a 7-10 elixir push, but this will catch your opponent off guard.

Also, unlike dropping golem in the back, the X-Bow will start shooting if they do the dirty Elite Barbarians trick and combined with four spirits, they’re gonna have a bad time.

If they Rocket, then there are three things you can do:

If the use Royal Giant to counter, play for the tie because usually Royal Giant decks are pretty fast at cycling.

However, I have won countless games against Royal Giant players because I deployed X-Bow at the beginning and they didn’t’ have Royal Giant in rotation, which put them in a continuous cycle of not being able to defend the X-Bow. If you desperately need to counter Royal Giant at the bridge, use the Inferno Tower. But make sure that the Royal Giant is in range and there are no small troops to distract it. 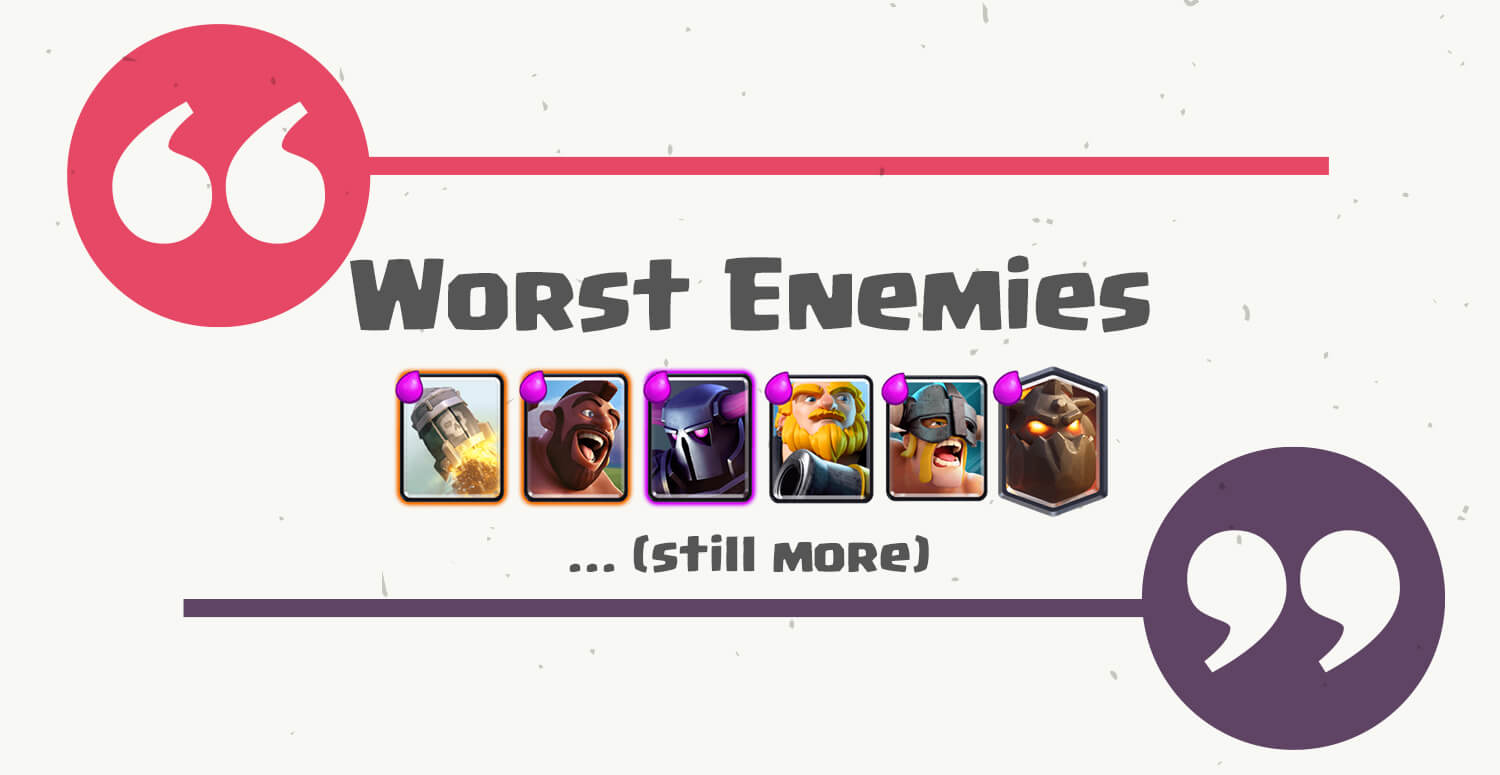 Some other threats that you need to watch for are:

Elite Barbarians: Not a hard counter to Siege but very annoying. Usually I just try my best to keep the Elite Barbarians from locking onto the xbow by constantly distracting them with small troops as the xbow and the distraction troops take them down.(E.g. Ice Spirit, Skeletons, Fire Spirits)

P.E.K.K.A: Pekka, is unique from the other tanks because it counters both X-Bow and Mortar. Even though the Mortar has a blind spot, one swing will pretty much destroy it. Place an Inferno Tower next to it and/or spam small troops while the Inferno Tower kills it.

Hog: KILL IT WITH FIRE and/or Mega Minion + Ice Spirit

All other tanks: With the Mortar, you will get some chip damage due to its blind spot, but make sure you defend his push because you now have a 4 elixir disadvantage. With the X-Bow, unless it is already locked on, there are two things you can do: put all your resources at the bridge and try to kill the tank, which I recommend for tanks like Giant, or let the building die and counter the push like normal, which I would recommend if you have Inferno Tower (which most Siege decks do) or are countering a golem.

Other cards: Most can be handled with Mega Minion, log, Fire Spirits, or a combination.

Light Beatdown: These decks are the middle child of the beatdown family. Not extremely great at anything but mediocre at everything. Counter their cards and play normally. Outcycle their Giant.

Heavy Beatdown: Rocket the pump if you have Rocket and they have pump. If possible, hit the tower as well. But beware of three musketeers. Golem 3M is coming into the meta slowly.

Light Control: You can’t let them out cycle you. Inferno Tower for the Hog. A lot of decks nowadays also incorporate log bait into them, so it that’s the case, don’t waste your log on anything except the goblin barrel.

Heavy Control: X-Bow and Mortar don’t fare particularly well against Bowlers and executioners, try to bait them out or closer to the bridge before you use your Siege building. You can also place your Inferno Tower at the bridge but this position is very weak to lightning or electro wizard.

Hut spam: Rocket their huts and try to hit the hut and a troop it is spawning if possible (mainly for the barb hut). This takes practice and skill. Save your log for if the troops clump up. You can also attack buildings placed in the middle with your building but I would not Rocket a hut by itself.

Salty ladder: Play for the draw if you are new to Siege. Against Royal Giant use the methods described above. Then you can share your replay and brag to your clan mates about beating a #noskilloverleveledrg

Lavaloon and other lavahound decks: Beware of planting your Siege building because if they prevent it from locking on you could be unable to defend their huge push. Try to kill balloon ASAP. Expect a miner, clone, or heal at any time.

Three Musketeers: Most of the time these decks also have pump so beware when Rocketing. You will need to either cycle back to your Rocket or use other troops to deal with it.

Graveyard: If you have archers or minions, save them for the graveyard. I’ve found that Mega Minion + Skeletons makes an equally good combo for slightly more elixir. Beware the freeze/poison.

Do NOT trade towers with your opponent if they are on the opposite side. Having one tower down on the same side as the side you are attacking makes it extremely hard to use a Siege building.

Also, you also need to know when a game is not possible for you to win and the best result you can hope for is a draw.

Siege is especially good at this because of a tactic known as turtling in which you drop your X-Bow in front of your king tower and play some rock-solid defense which is fairly easy with the usual cards found in an X-Bow Deck.

I hope y’all liked this guide! Tell me if there is anything I missed and I will add it through comments! Dreemurr signing off!