We’ve all tried to make a Royal Sparky deck once in our Clash Royale lives, (if you haven’t, you probably started playing after E-wiz and Goblin Gang were released, because that was the point where Sparky started to suck real bad)

Some of those decks were good, but most of them weren’t.

I myself tried to do one of those decks but back then (before E-wiz, damn I’ve been playing for a while…) I didn’t understand synergies very well and Sparky was too slow;

Now that Sparky was buffed it was time to look again in that direction, and the results were just too good, both in ladder as in tournaments, to not be posted around. 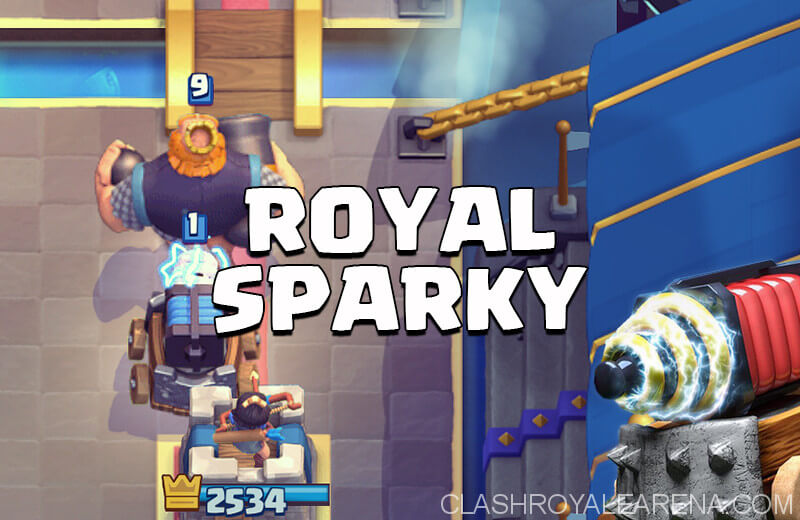 For this part we are going to split the deck in three sections, the first one being:

This big guy is our win condition, and surprisingly enough you won’t even have to think of overleveling him because this deck is made around his strengths and weaknesses.

Because of that, your opponent will have an actual tough time defending him, not like with any other Royal GG deck (looking at you Elite Barbarians + Royal GG players).

The Royal Giant counters can be split into three groups: ground anti-tanks, swarms and infernos, and that’s where the next section comes into hand.

Side note: If your Royal Giant is overlevelled and you intend to use this deck, shame on you.

Its massive damage per hit will be extremely helpful for your Giant, since it can one shot or severely wound a number of his counters, like Barbarians, Mini P.E.K.K.A., Elite Barbarians, Lumberjack, and more.

Also don’t worry about its fragility, we’ll get to that later.

Electro Wizard: Inferno Tower used to be extremely popular a very long time ago, and then this guy came into the arena and turned defenses upside down :v.

When your Giant is defended with an Inferno Tower or Inferno Dragon, this stunning guy (pun city!) will render those cards useless.

Even when your opponent doesn’t have those cards he is a very valuable asset on defense.

Arrows: When your opponent is playing Zap bait, Log bait or Fireball bait (with Minion Horde) the Arrows will help you GG them.

Unless it’s the meta decks, the matchups shouldn’t be so hard (be creative people, damnit!).

This slot could be replaced by other spells but none will be as good as the Arrows; Log? No air. Zap? Not enough damage. Fireball? Too expensive/not enough radius. You get the point.

Now that all three possible counters are covered, that brings us to the next section:

No, that is not a typo. Even though it is word play, it is very true since these cards will synergize with the three cards in the section above so they can be more effective and get those wins.

This card has a lot of uses, but one of the most important ones will be tanking offensively.

If your opponent tries to defend your Giant-Sparky push with E-wiz, you can summon an Ice Golem to tank the split attack of the E-wiz and allow Sparky to shred him to pieces.

He can also tank for Musketeers, Skarmies, etc. And cycle when you need another card.

Goblin Gang: The swarm. Without this card some split pushes would be too hard to defend, or some glass cannons would cause a bit too much trouble for your own good.

They also help to bait Zap so they don’t reset Sparky, or have a wide variety of uses beyond the ones mentioned.

Also, do yourself a favor and don’t defend a Hog with the Gang since the Goblins are too fragile, use Mega Minion or E-wiz instead.

You need a card just like him when the deck looks weak against air, since the E-wiz alone isn’t strong enough or is too expensive for the situation.

Most Lava Hound decks would counter this one deck if it weren’t for the wonders that the Mega Minion does for it.

Elixir Collector: This card is the difference maker for this deck.

Its overall cost is 4.1 so it helps a lot Elixir-wise, but it also helps bait two of the hardest Sparky counters: Rocket and Lightning.

With this building, you force your opponent to make a decision, either they destroy your Collector, leaving them without their best counter for your most dangerous support card or they destroy your Sparky, thus allowing you to have a huge Elixir advantage and spam more and more troops until you overwhelm your opponent and, ultimately, win the match.

This part is for those who don’t have one of the cards above or don’t have it in a proper level to play. But overall, I don’t recommend any of the swaps i will mention, if you can use it with the original cards, please do.

This deck is not very hard to play (or at least I think that, I don’t really know for everyone else), but you have to remember some key points to not lose the match.

Always play the Elixir Collector first, this makes your opponent react, and further reveal how they are going to play and/or their deck type.

Early in the match (3:00 to 1:00), you can only perform a Royal Giant + Sparky + else combo as a counterpush since it is very expensive to send a proper Tower-wrecking combo*.

This being said, during this part of the game you are going to focus heavily on defending and pumping up, investing towards the true havoc that this deck can create.

Pretty much you will only get Tower damage early if the opponent plays recklessly or makes mistakes.

If you have 2 Elixir Collectors on early in the match you can send a combo out of the blue since 2 pumps give you a crazy Elixir advantage.

2x Elixir is when you can truly go crazy, as you can defend one last time and unleash hell for your opponent since.

With enough pumps and Elixir advantage, you will be able to send combos on steroids and cycle towards even more cards, extinguishing their defenses and shredding through the towers life points or even send a split push to make them decide which Tower will go down as you play your way to victory.

Usually, I make a common matchups section to go along with the guide and help understand better how to counter everything, but I won’t in this guide since it doesn’t differ that much how you play everything.

Just about one or two decks will give you true trouble, like Golem decks with Lightning, but for that just spread your troops around. Since it was nerfed, it really helps the Lightning not counter this deck (lul).

Maybe also a really cheap Hog deck but for that just defend the Hog with anything but the Goblin Gang, as stated above.

That’s it for this guide!

Remember, if you lose a couple of matches with this deck, don’t get discouraged. That’s natural when trying something new; you just have to get used to it.

Or if you can’t snap off that losing streak, maybe this deck is not for you :v.

Who knows? Please write what you thought of this deck in the comments.

Also, I was thinking about doing a guide on my own version of Bridge Spam which I have been using for quite some time now  (believe me, it’s nothing like any other Bridge Spam deck), but this one deck fit the meta a lot better.

Please write in the comments how do you feel about this too :v. See you in the next guide! 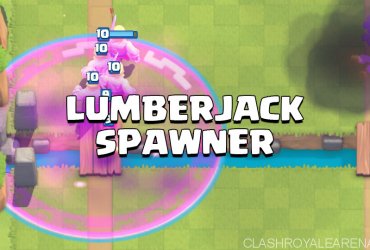 Hey guys, it’s Exordium! Today I’ll be evaluating a new Legendary Arena Deck I’ve been experimenting with, featuring some of the Huts and the Lumberjack! Lumberjack Spawner Deck Playstyle? Playing … 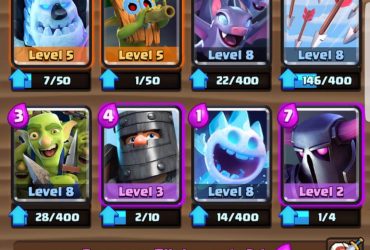 Hello , I Am Sean. I am going to show you my deck that works on Arena 9 pretty well! First of all the Pekka She is your only tank …