Hello guys I am OddsomeOddy and this is going to be a guide about my Royal Giant + Sparky Deck. Using this deck I pushed from 2600 to 3150 trophies and now sitting consistantly in Legendary Arena. It contains 2 Legendaries (Sparky and Ice Wizard) but you can easily replace the Ice Wizard. 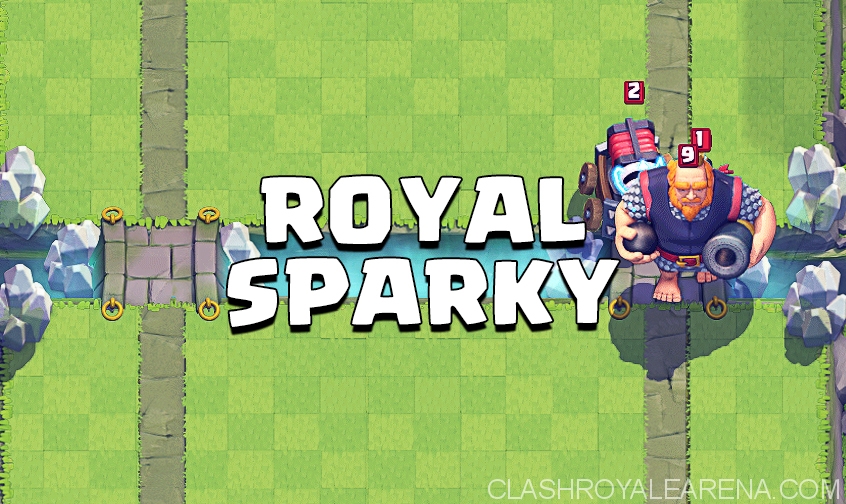 This deck is a pretty balanced combination of offense and defense. You can counter most decks with it quite efficiently. The main damage dealers of this deck are Sparky and Royal Giang and when executed correctly it can be totally overwhelming your opponent. First I’m going to explain the main purpose of every card in this deck!

Royal Giant: Really strong troop in the current meta, great on offense and defense in emergency situations. Main damage dealer in this deck and should be protected at any costs. I usually place him behind my crown towers to make a strong push.

Sparky: Her purpose is to protect the Royal Giant from treats on the ground but can also take a hit at the tower when making a good push and the opponent makes something wrong. Normally placed behind the Giant very late to surprise the opponent. Also has a great use for defense against tanks such as P.E.K.K.A or Golem. I often wait until Double Elixir till using her, so she’s not always necessary when pushing.

Ice Wizard (can be replaced with Musk or Valkyrie): The Ice Wizard takes a huge role in this deck, but can be replaced by the troops said above. Amazing skills in stopping big pushes and also on offense. With an elixir cost of only 3 I like to combine him with Sparky behind the Royal Giant before double elixir. He protects you from air troops such as minions. Also a great help in taking out Royal Giant and Hogs.

Wizard: Amazing when combined with Ice Wizard. Pre Double Elixir I often use him on defense to prevent swarm pushes, air attacks and Hog Riders etc. In double elixir I often use him instead of Ice Wiz when making a push but is very great together as well when you have spare elixir.

Skeletons: Amazing value and lethal card against almost everything. I use them to slow down Hogs and kill him with Pekka then, distracting Princes, other Mini P.E.K.K.As, Musketeers, incoming miners, Epic P.E.K.K.A. AND VERY IMPORTANT: When your opponent has Inferno Tower, place them in front of your RG and it’s a fantastic counter against Inferno. Just such a great card.

Fireball: Fantastic when paired with Zap. Can take out Barbarians (when also Zapping them. It’s worth the elixir because your Giant survives a lot longer and can take many more hits onto your opponents tower), 3 Musketeers etc. Make sure you don’t waste this card as it can decide about win or lose in many situations.

Zap: Combined with Fireball it takes out high level Wizards, Musks, Ice Wizards. Used on defense against Hog combined with Mini P.E.K.K.A to kill him quickly, Minions, many small troops and resetting Inferno Towers to let them lock onto your Skeletons. This card is a real life saver in many tricky situations.

Early Game: You should start off slowly. Place just one troop, such as Royal Giant or Ice Wizard to let your opponent react to the card. You need to know your opponent’s cards to make an effective push. If he uses Barbarians, you know you should always have a Fireball ready. Monitor his actions and find out what cards he uses and use that to your advantage. When he starts a push you should have enough Elixir to stop it, then make a small counter push with Royal Giant and Wizard or Ice Wizard. Use Sparky in emergency situations only before Double Elixir Time (last 1 minute).

Double Elixir Time: Now you can start making big push combinations with your Giant, Sparky and Wizards. Watch out for opponents Fireballs and don’t play everything at once. Always expect Hogs and Tanks, so as just said, time your pushes to not be out of cards when trying to defend.

How To Counter Cards:

That’s pretty much everything I have to say about this Royal Sparky Deck. Thanks for reading guys!