Hey guys, Leonex here with a new and unique deck. So the other day my friend trolled around with a Giant trifecta deck (Giant, Royal Giant, and Giant Skeleton) and i thought that it might actually work with a bit of modification. Shout out to Stealth for giving me this idea!

This deck might seem stupid at first but it can actually work with a bit of practice. I’ve tried this deck out on classic challenge (12-1) and i was surprised how well it did for such a stupid looking deck. Of course i had to practice with some friends first before i tried it on classic challenge. So anyways, let’s get on to the deck now. 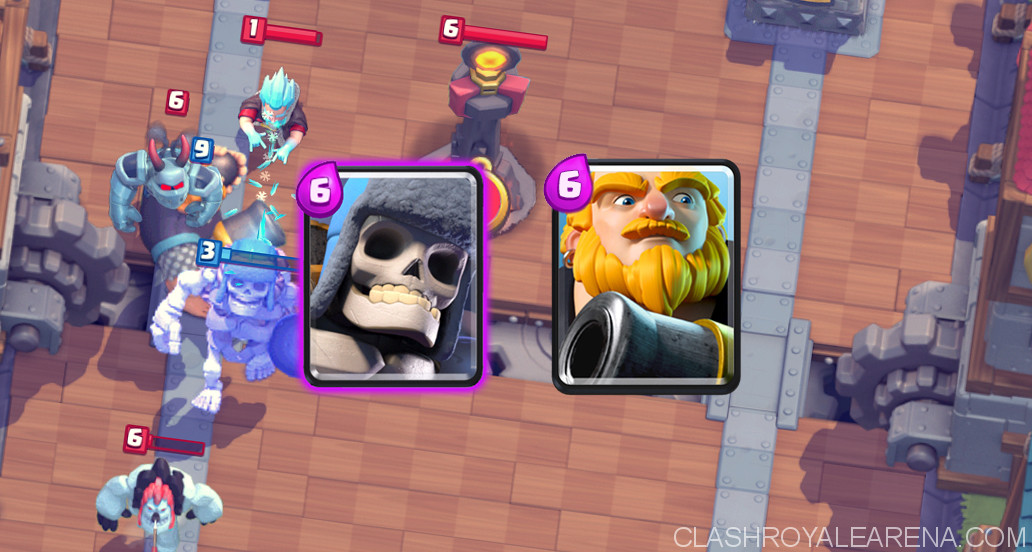 Tornado: This new card would match perfectly with the Giant skeleton. Right before your Giant skeleton dies, play the tornado and pull as many troops as you can to the bomb as sometimes some cards can walk/run fast enough out of the bomb’s radius. Additionally, the tornado is also a decent general to deal with hordes to stall pushes. You can also pull a miner to your king tower with this, making it attack the king tower.
Related topic: Everything about Tornado

Ice Wizard: A cheap and versatile card. Great for defense as it has slow effect and can act as a support for pushes as well. It can also slow down troops so that it doesn’t escape the Giant skeleton’s bomb radius. A good starting card to play as well.
Alt: Ice Golem – Psudeo tank, distraction, and also has slow effect when it dies.

Ice Spirit: A versatile and great cycle card to get to the cards you need for only 1 Elixir. It can also freeze troops long enough for the Giant skeleton’s bomb to explode and prevent them from escaping the radius.

Mega Minion: High DPS card for only 3 Elixir, great for defense and counter pushing. You can use him to help take out glass cannons during pushes, like Minions Musketeers, or other Mega Minions. Take a look at this in-depth guide to read more about how to use the Mega Minion properly.
Alt: Minions – to avoid Lightning as it’s very common right now

Tombstone: Great distraction and defensive card. Especially great against sparkies. If left alone, it can gather a decent amount of skeletons during pushes with the 2 Giants tanking them. It can also be a good starting card to play as it forces your opponent to start first unless he’s willing to waste 3 Elixirs. Recently very common due to beatdown decks being very common as well.
More: Why we should use Tombstone

Zap/Log/Fireball: These 3 are what i think can be the best spells for this deck but really, it’s up to you. The Zap can reset Inferno Towers so that your Giant skeleton can get there. Log pushes troops to the Giant skeleton’s bomb. The Fireball deals with glass cannons. The Log and Zap is more of a cheap and versatile spell while the Fireball is the one to take out damage dealers.
Alt: Lightning – a bit too expensive but can still work

You’d want to start the game with a cheap card like the ice wiz or tombstone and force your opponent to push first so that you can defend and launch a counter push. The Giant skeleton can be a great defensive card as well as it can distract enemies long enough for the tower to kill them and if not, then it’ll explode when it dies.

If you manged to defend while keeping your Giant skeleton and other cards alive, thats when you should start the counter push with the Royal Giant. as this push is very expensive, try your best to only counter push when you’ve gotten a big positive Elixir trade.

When pushing, unless you need to get the Giant skeleton to the tower, don’t worry too much about protecting your Giant skeleton as you actually want it to die, just prepare your tornado or Zap/log to pull in troops to the explosion.

This deck works really well with the current meta as you can destroy big pushes with the Giant skeleton’s death damage. With the addition to some other cards that you managed to keep alive, you can also start off the counter push without the Giant skeleton.