Heya guys Lolman here with a brand new Royal Ghost deck which helped me get a few 12-win challenges.

It’s a variant of a deck guide I made earlier with P.E.K.K.A Miner Poison.

With some subs to make it stronger in this meta, I think this is one of the strongest decks currently.

I can’t think of any good counter decks to this unless you play poorly vs punish decks like 3M or bait decks. 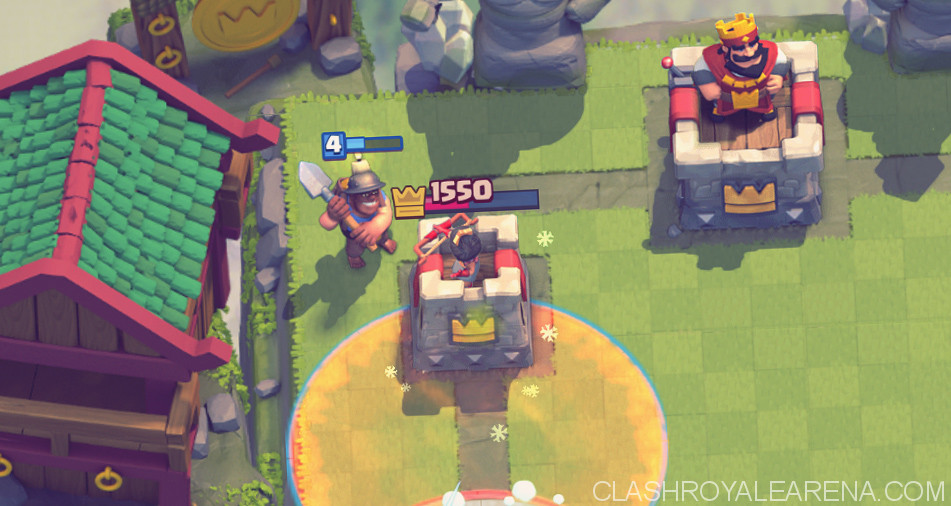 P.E.K.K.A is now a must in so many decks due to the rise of beatdown decks.

Mega Knight is good but I would much rather run a P.E.K.K.A with some cards to counter swarms.

She’s that unstoppable wall not much can go through, albeit maybe an Inferno Dragon on your P.E.K.K.A while E-wiz is out of cycle is your worst nightmare. (You can still deal with that with maybe Minions + Zap or something).

Only used on defense unless it’s 2x elixir, one of your towers has taken significant damage and you are up in elixir.

Then, I’d drop her at the back same lane because the chances of opponent pushing other lane are slim with that little time left. Typically you can still easily defend as this deck is extremely strong on defense.

Miner: One of the most consistent win conditions.

Miner in my opinion is one of the easiest to play and solid win conditions once you got all of it down.

There are a few things you need to pay attention to like placements etc but those are very easy to get a grasp of.

You want to whittle tower HP down with Miner while defending with other troops, also getting value Poisons off.

Spell nerf means Miner damage ought to be more so always have a Zap hovering over your Miner.

Can also be used to take out Elixir Collectors or Princesses as well!

This is for clearing off troops.

Learn how to time it to clear all skele barrel skeletons though, can be a bit tricky.

Should be used on Poison, Princesses, Three Musketeers etc.

It is usually a good idea to save it for defense vs Golem. I always Poison+ Zap Night Witch and Mega Minion with P.E.K.K.A on Golem.

Poison also is good to get value on Elixir Collector.

Say you Miner Elixir Collector and they use Goblin Gang. Don’t Poison immediately! Wait for them to make a play like drop Three Musketeer at the back or something to Poison Muskets, Pump and tower.

Even if they drop 1M in the pump lane, you still want to do this! P.E.K.K.A is great at countering the 2m so that’s not an issue, get that value.

Okay I just wanted to tease you guys a bit by not mentioning him first.

Now Royal Ghost honestly is a better Bandit and a better Dark Prince.

Royal Ghost is far more threatening than a Bandit, has similar HP and actually higher DPS than a Knight!

He is invisible so no troop or tower shoots him during his movement and only shows himself when he attacks first.

Remember that he also does splash damage!

Right now with the buff, Guards are so much better than Goblins.

Guards actually counter Royal Ghost too! All you need to do is just to surround him.

You can use Bats for a faster cycle but I like Minions ability not to be Zapped away.

Always make sure you don’t drop them on top of your opponents Ice Golem/Ice Spirit.

Typically you cycle them or defend then counter but there are moments I’d go aggressive with Minions. 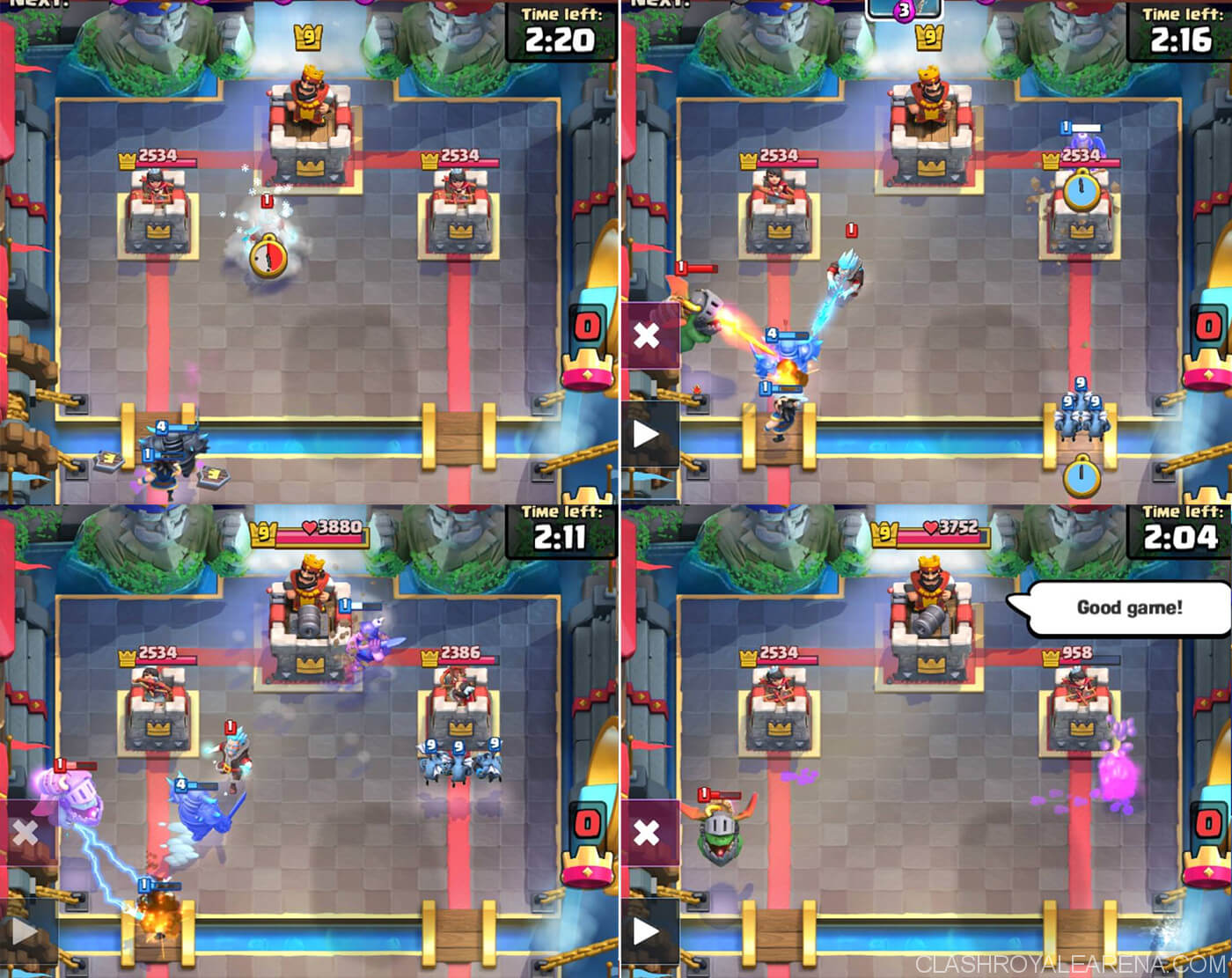 At this point, I defended his Guards + Royal Ghost + Miner push with my E-wiz and P.E.K.K.A.
Was planning on pushing same lane but saw that Ice Wiz and I knew he had Tornado because no one uses Ice Wiz or exe these days without Tornado.
Playing Miner on same lane tower is not smart. Ihis is why I pushed the opposite lane with Minions+ Miner and he made the mistake of Tornadoing the Miner to the King’s Tower while I did a good 1600 damage to his tower sealing my victory.

The #1 Legendary card in the game.

Very very versatile to be honest, his reset and defensive capabilities are really what he’s used for.

E-wiz’s Zap is your savior combo vs Horde behind any huge tank, etc.

He’s great at destroying bait, and resetting the Inferno Dragon and whatnot as well!

He is a squishy troop so protect him!

Early on, this deck is a Miner Poison deck.

Despite P.E.K.K.A and other support cards, this is not really a beatdown deck.

P.E.K.K.A is your Inferno Tower and this is a control type deck.

Early on you want to get a feel out of opponent’s deck. Get an idea what cards you need on defence.

Always try to Miner the Pumps and punish with Royal Ghost, Guards etc in combination with Miner rather than Poison because you want Poison on defence.

You also need at least Minions or E-wiz if you are facing a deck with I-drag that might snipe your P.E.K.K.A behind their tank etc.

Get a feel for the deck.

Some decent starting plays in my opinion are:

Just try to make a safe play and get a feel for opponent’s deck while getting a bit of chip damage.

If you get a lot of damage? Great! Don’t get over confident and play a more defensively oriented game.

With their deck in mind and a rough idea of their deck cycle, here is where you would want to use your Miners a bit more cautiously.

If you face a deck with Guards and Guards are in cycle, you don’t want your Miners to always land on the tower when they have Guards.

If so you need to take necessary precautions. Like maybe changing up Miner placements or use prediction Poisons!

That being said, before 2x elixir, only Miner+ Poison if you are ahead in elixir!

You should have an idea what cards to save on defence as well! Ie- If you ought to use your P.E.K.K.A to defend pushes or if you say face a Graveyard deck where using a P.E.K.K.A in the back after a successful Graveyard push defence isn’t that bad of an idea. Etc.

Keeping that in mind, while making sure you make positive trades whittle away on the tower HP. Getting value Poisons!

Now Miner + Poison pushes should be what you aim to cycle.

Use your cycle cards to get back to Miner while defending and making sure you don’t lose your tower too and then try to get back to your Miner and Poison off whatever they use to defend it.

Make sure to switch Miner placements at this point.

Getting Tornado’d to the tower isn’t that huge of a deal at this point so you should be fine!

Vs most match-ups, following that strategy and using Miner Poisons on the tower till the end of game should get you that sweet, easy 1-0 victory.

If you have a tower before 2x, try to work at the 2nd tower without overextending and defending when you can! 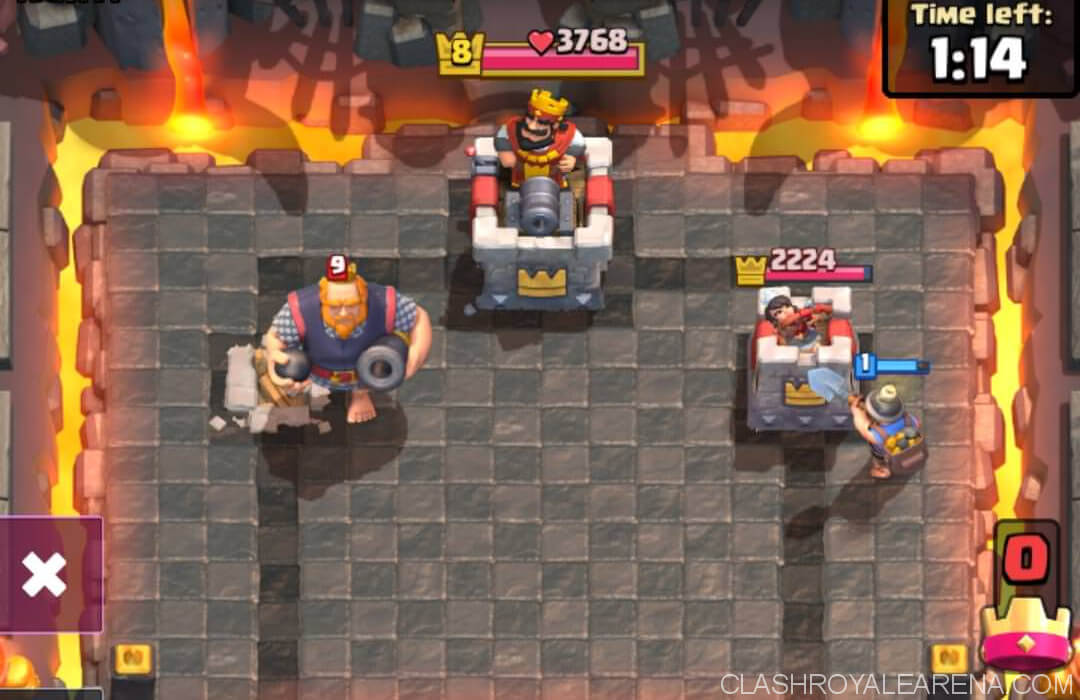 Before I go onto match-ups, I want to show you placement of a 1-0 situation, using your Miner in order to get your enemy’s tower without king shooting at him.

Now there are 2 variants. One with Lumberjack and one with Rocket.

Either way this deck hard counter both. Just make sure you do 3 things.

Follow these and this is a very easy win.

Can’t stress this enough but, save your E-wiz! Protect him at all costs.

Inferno Dragon is the worst enemy without E-wiz.

So vs this deck a few things to keep in mind are.

Like the Golem deck, if you do play cautiously and save the cards you need then you are in the clear as this deck on paper hard counters any Mega Inferno Dragon deck!

Not a hard match-up.

Guards, Minions etc for the Barrel.

Royal Ghost renders a defensive Gang useless because one swing kills all the Goblins and the other the Spear Gobs.

Poison off the Princess and you should be golden.

If they use Inferno Tower, honestly don’t bother going to support P.E.K.K.A.

This is control and in the long run Miner Poison will beat their deck as long as you counter their pushes properly.

Play it safe and save a counter for Barrel and you will be in the clear!

Vs this Poison their Graveyard.

If they defensive Poison a counterpush of yours then use Guards, Minions etc on defence vs Graveyard.

P.E.K.K.A on offence as a tank is fine. While Miner chips away at tower.

If Poison was used on defence by them feel free to drop your Poison to get their defensive troops. Usually they will be like, Ice Wizard, Mega Minion, etc. All mid HP troops which will take a significant amount of damage by the Poison!

Try not to get your Miner nado’d to the tower early on too! If no Tornado go wild with the placements.

Test out new ones and you will be fine.

Similar to Golem decks, but no need to worry about pump.

If Goison with Prince, use Guards on Prince while P.E.K.K.A kills Giant.

Deadly counterpush potential from your end!

If Giant bait with Horde and Minions etc, then you want to save E-wiz with zap and potentially Poison on defence getting massive value.

In a nutshell this is the easier version of the Golem match-up.

A maneuver I like to do with P.E.K.K.A tanking is Miner back of X-bow then Poison tower and X-Bow.

In 2x elixir, you can Miner tower and Poison their X-bow while cycling tanks if they manage to kill a P.E.K.K.A.

Predictive plays can play a huge deal too if you are dealing with an X-bow + Inferno Tower deck for an example. 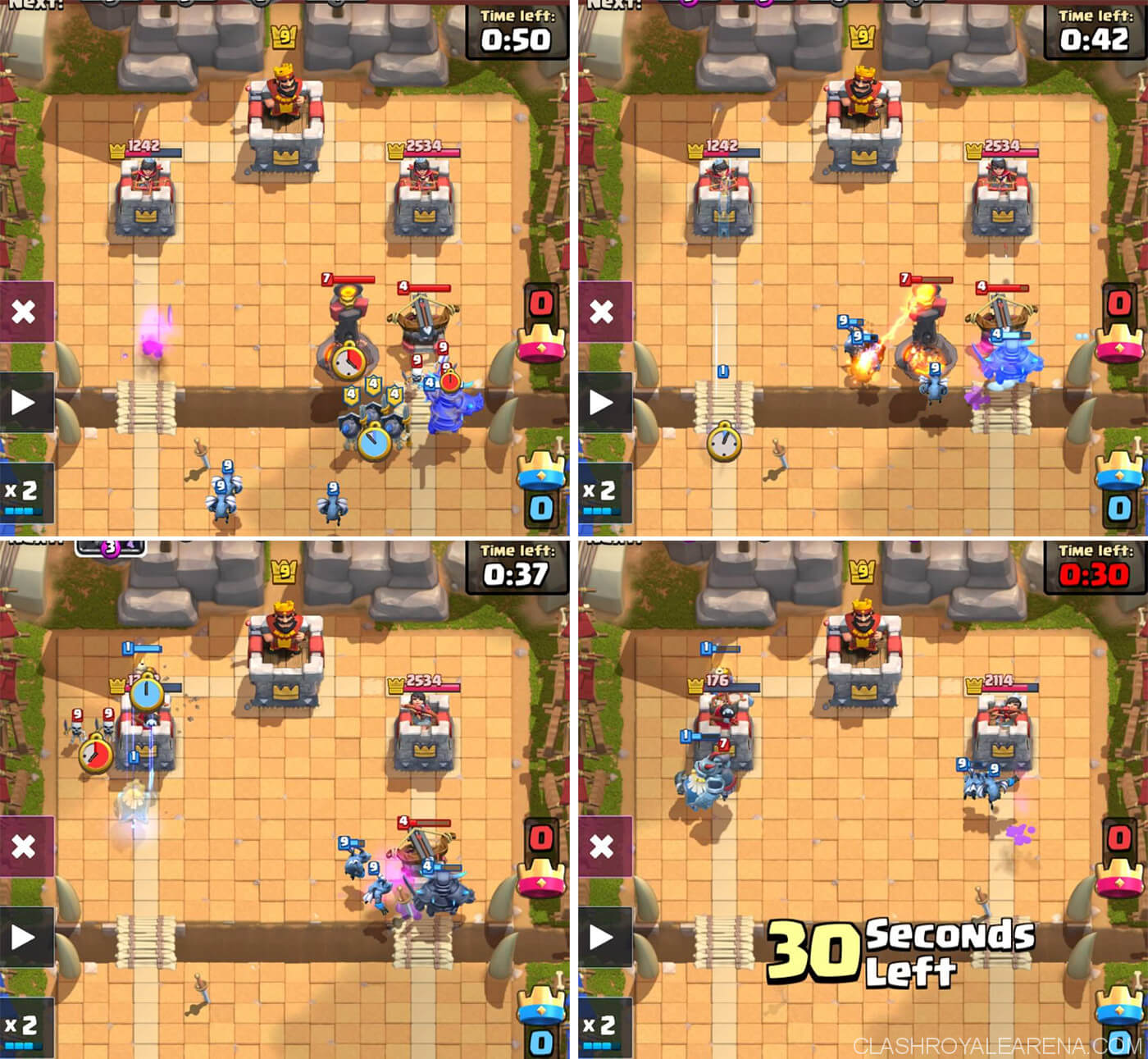 Here I knew he had Inferno Tower in hand so I dropped Guards preemptively and it paid off.
Didn’t even need to Zap and pre-emptive plays like this can be golden. Just make sure you pay attention to their cycle etc.
That Royal Ghost on other lane was like a 2x lane pressure. So he dropped Knight with the P.E.K.K.A allowing my Royal Ghost to go on and shred that tower.

That’s all I got for you with this deck, not too much more to cover.

If you got any questions please leave them down below I’ll answer them when I get a good look at them. 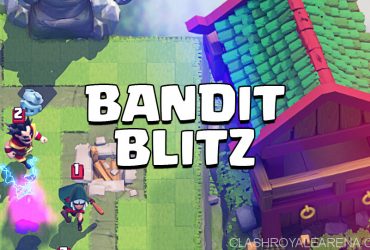 Hi there! It’s Exordium here, back again with a detailed analysis of my latest video Deck and a commentated guide, below, to go with it! This video will be followed … 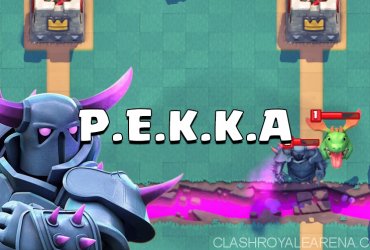 Finally made it to Legendary Arena with this Clash Royale Arena 5 Deck after grinding for too long. I had a lot of fun playing this deck, and thought I’d …