Hey guys! It’s me HSNA here with my third guide! This time, it’s about my most used deck, the classical spell – bait!

My main deck on my first account was this version of spell bait, whilst second and third were LavaLoon. I recently got Log on my second account to, and I pushed for 3000 trophies to 3400 in a day, whilst losing only ONE battle!

So, this deck is also very good against those annoying Elite Barbarians, that are amazingly common at this trophy range. 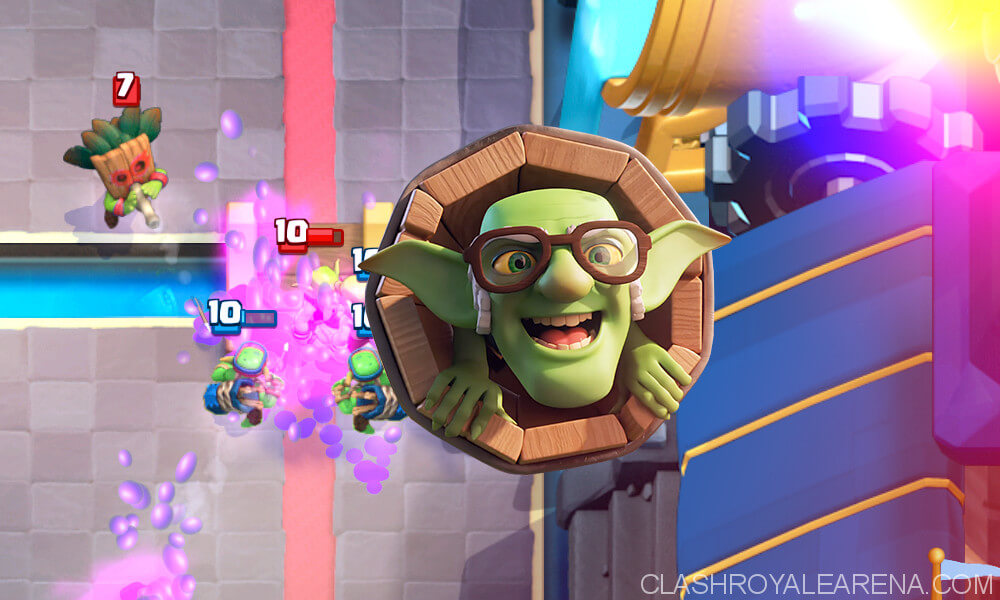 I know that someone posted a guide about this deck, but (no offence author of that guide) it wasn’t as detailed as you would like it to be!

Disclaimer: I know that this exact type of spell – bait has been posted twice, and some people are complaining about it. Please try to remember that this isn’t just a normal guide, it’s more like an encyclopedia, so it is also very long. Sorry once again to all those people who hate spell – bait.

Ok. First, let’s have a look at the F2P version of this deck.

So, now that the F2P version is out, let’s bring in the real version of this deck.

The real version of this deck is actually much harder to use than the Classic deck, so if you don’t have much experience with spell bait or chip decks, Adam strongly recommends using the F2P version as it has better defense against combos such as Golem and Minion Horde! (He said this in one of CWA’s channel).

The real version of this deck requires great skill and a positive attitude! Before I get deeper into the guide, I will give you two times when NOT to play this deck:

So these are the cards in the deck: 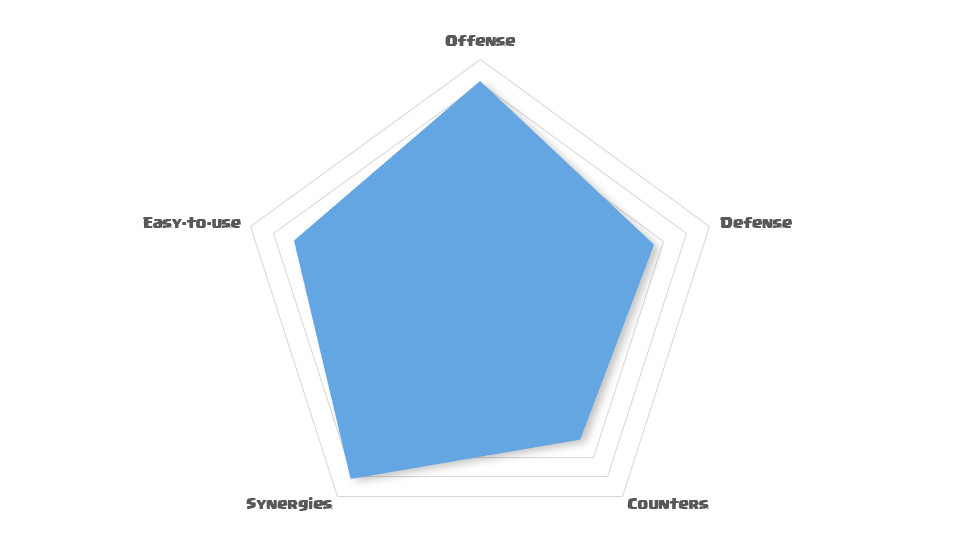 So, let’s go a little bit into card specifics:

You guys probably all know what to do in those clutch situations right? Well, if you don’t, try the ‘Hidden Barrel’ trick! Use this trick only once per match, when their tower has 1000 HP or less.

For tank annihilation, you’ve got Inferno Tower (although Sparky actually worked for my friend instead of Inferno Tower sas the both bait Zap).

To distract/ take care of the supports, you have your one and only non – squishy card: Knight! In my opinion, it is a much better option than Mega Minion as it is more versatile and is a common!

Your two spells are obviously Rocket and Log! Log is the most versatile card in this deck in my opinion as it offers so much value for just 2 elixir!

This deck is level independent! What you need with this deck is pure skill and PATIENCE!!!

You might lose 300 trophies at first, but after that, it will be hard for anyone to beat you!

Most of the top ladder people use this deck, so it must be good!

It is a fairly easy matchup and the winrate is 80%

In this matchup, you want to constantly pressure your opponent and make sure you don’t fall into any of his traps!

One of them might be luring you to use goblin Gang on something else and then get you to use Inferno Tower on his Hog Ice Golem Goblins push!

All he has to do now is zap your Inferno Tower! If he decides to support Hog with Goblins, Bats etc, don’t worry as your strong Hog counter combo will still prevent a hit!

In the early game phase, all you want to do is create a little bit of pressure on him using Goblin Barrel and Princess!

If he uses Minions (might) or Minion Horde (very unlikely), don’t waste you Princess on offense! Instead get him to use his spell and then use Goblin Barrel!

During midgame, you will have a solid understanding of his deck, so you can go a bit more aggressive using Knight and Goblin Gang/ Goblin Barrel!

Keep on countering his Hog pushes using Goblin Gang + Ice Spirit combo and once you use it twice in a row, place the Inferno next time in case he prediction logs!

During double elixir and OT, constantly Rocket their tower, whilst defending as much as you can!

Use Rocket, then place Goblin Gang in front of your damaged tower! Next place an Inferno tower in 4-3 plant then use Ice Spirit and Rocket again! This can all be done in the space of 20 seconds! (That was just an example!)

The key to this deck is to keep on doing chip damage with Goblin Barrel and Princess and taking in minimal damage!

Being another fairly easy matchup, I’d give it a 70% winrate.

In this matchup, your objective is to constantly rocket their pumps and when they use a Golem at the back, pressurize the other lane with a quick Goblin Gang/Barrel.

Don’t use Knight, as in this matchup, you need him to take out the supports and tank for the Inferno Tower. This will either force them to take significant tower damage or force them to use a card that they were planning to use on defense.

Next, you want to wait for 8+ elixir and put Princess on the other side SO THAT IT TARGETS THE TANK/SUPPORTS!!!

Use your Inferno Tower in 4-3 placement and use Knight to take out supports. Ice Spirit for additional support.

Due to the fact that you will have minimal elixir, you have a Princess on one lane and a Knight on the other, don’t waste anymore elixir.

Anyways, you really want to get a feel of their deck. In most situations, they will not use Golem in the first minute, which is great for you as you can get that chip damage in!

During that mid game phase, your opponent will use Golem 65% of the time. By now, you should have a feel of your opponent’s cards.

If his support is likely to be a splash damage and is spells are Arrows and Rocket, use Goblin Gang AND Goblin Barrel at the same time, as he will suffer a lot of damage even if he arrows everything. If he has Log, then use them separately..

If his support is likely to be Night Witch or something, pressurize him with a Knight + Goblin Barrel combo on the opposite lane.

Counter their push with Inferno Tower for tank and Knight / Goblin Barrel for supports.

Although it is difficult, you will still win 60% of the time.

Definitely two of the hardest matchups for this deck, unless you have Knight in hand. Knight for Miner and Graveyard, and then counter push. This is what you need to do for the whole game, as they always do the same thing (most of the time).

If you don’t have Knight in rotation, be ready to take some damage.

If Poisoned Gravy and Miner Poison were 5/10 for difficulty, LumberLoon is 10/10. Very, very hard matchup, due to the fact that Rocket saves your life.

So, you can’t really get that tower damage in double elixir or OT.

Your best bet here is to pressurize him as much as you can, but you will see that most of the time even that doesn’t work.

So, the winrate is a meagre 16% (Me and my neighbour combined have versed LumberLoon 50 times in the past 2 months, and we only won 8 of them. My neighbour is in Challenger 2 currently.)

Rocket once again and Ice Spirit for additional support.

Most of the time, they will not have an efficient counters to this deck, giving you a huge win rate of 90%

Very easy as well, as you have Rocket for Sparky and there really is no use using Sparky for a Goblin Barrel.

Slightly harder, but still easy to beat. Just use that Rocket and Inferno Tower for Giant. Say GG afterwards. Knight or Goblin Gang on supports.

Easy. Very very easy. Knight on supports and Inferno Tower or even Goblin Gang on Giant.

Basically same strategy as Giant decks, but much harder, as you don’t want that P.E.K.K.A going for the Knight (which is meant to kill the supports).

So, you need that Goblin Gang to protect Knight. Inferno Tower rarely needed.

Easy. Pressurize other lane and Inferno that LH. Princess for Lavapups and Lightning doesn’t matter much in this matchup.

However, LavaLoon is much much harder. Luckily it’s not in the meta anymore. For LavaLoon, pressurize, Inferno Tower, Princess, Ice spirit and then Goblin Gang. Knight to distract supports.

GG Giant, the annoying one. Once again, Inferno Tower, but BE VERY CAREFUL TO MAKE SURE INFERNO TOWER LOCKS ONTO THE RG!!!!!!!!!!

To be honest, very easy as well. You have Knight, IT and Goblin Gang, along with Rocket. Enough to cause a migraine???

Below is a video of me playing (sorry about poor audio and my voice is just CRINGE). 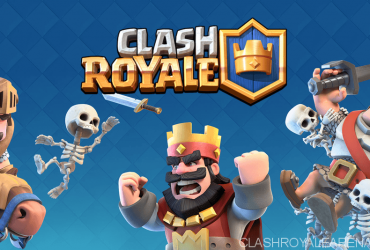 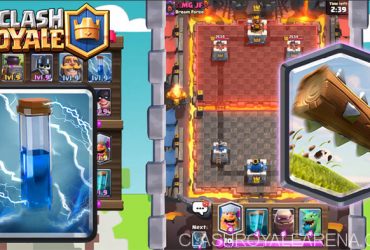 Hello Guys, this is Psych0++ from the Misfits Gaming clan, I have been using off the meta deck for a long time and I love to use it. I have …