In Clash Royale, one of the most important skills is figuring out what your opponent’s win condition is, after the first moves. If you can determine your opponent’s strategy early, you will have such a huge advantage.

The tips I am going to show you in this guide can be only applied If your opponent makes the first move (If you place your cards down first, your opponent will likely respond your cards and not reveal his strategy. 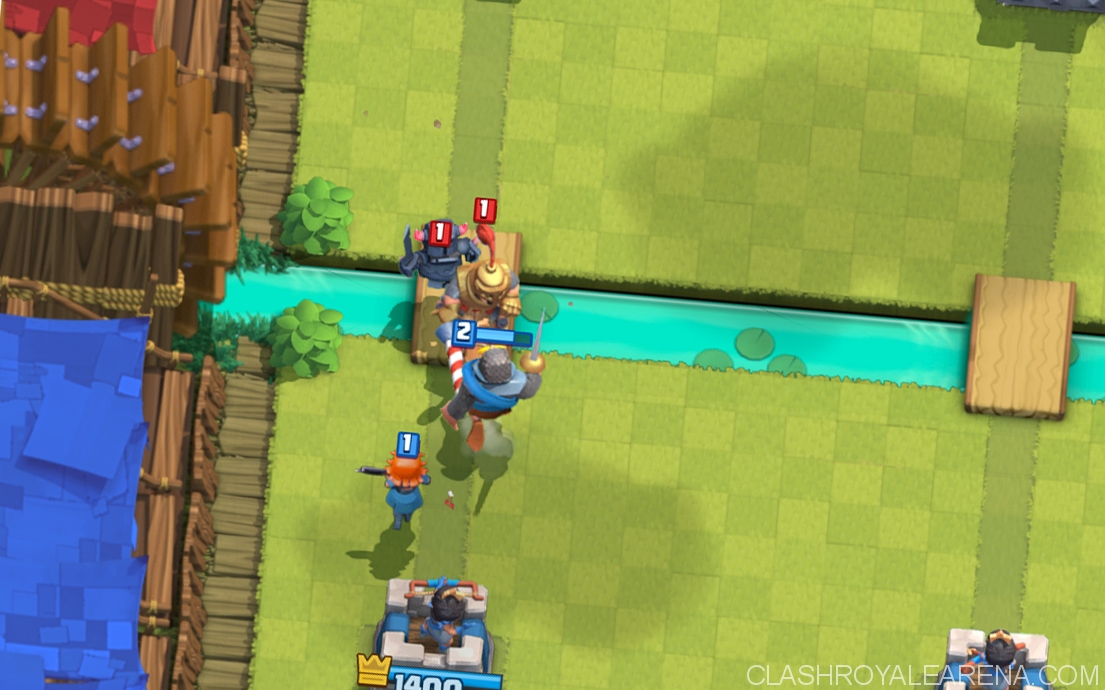 First off, this is the TL;DR version of this guide, In case you don’t want to read the entire wall of text. Cards which are marked with * are overlaps between the cards and the strategy they indicate. 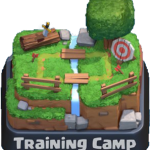 Arrows: Your opponents at here are likely very new players so this rarely happens. Also, it doesn’t give any information on their strategies.

Bomber: Bomber is often placed behind the Giant push or Prince Push. Not many players use Bomber in Hog Decks because of its Elixir cost (comparing to other support cards). Sometimes, we can see Bomber in Royal and P.E.K.K.A decks. Truly this guy’s userate is not really high at this time.

Archers are often used to support tankers such as Giant, Golem, Royal Giant, … and to defend. Archers are very common support troops and they can reveal nearly nothing about your opponent. However, they are a part of the super popular “Jason Deck“.

Knight is the mini-rank which can be placed in almost any deck. He works very well in decks which use mini pushes to get chip damage on Towers. Just don’t ignore him in any way. A lone Knight can deal hundreds of damage on your Tower and it is even worse If there are a couple of troops supporting him.

Fireball: Usually, only inexperienced players use Fireball at the first moves. Also, this reveals nothing about their strategies, as this card can be placed in almost any deck. You can read everything about strategies with Fireball at here.

Mini P.E.K.K.A is extremely versatile and can be placed in almost any deck. At this time, we can usually face Mini P.E.K.K.A in Trifecta Deck and Miner Cycle Deck. It truly doesn’t give much information about your opponent’s deck.

Musketeer can be used in loads of decks such as Giant Decks, Royal Giant Decks, Hog Rider Decks, … Many players like using this card in conjunction with the 3 Musketeers card so please beware. Your opponent will always try to protect her with a tank.

Giant is one of the best tankers in Clash Royale because of his damage, HP and Elixir cost. He will protect high DPS troops behind while dealing tons of damage to opponent’s Tower. Players usually use Giant in Jason’s Deck, Spawner Decks, 3 Musketeer Decks, Giant Balloon Deck, Spark Deck and one of the most popular deck at this time is the Giant Poison Deck. If your opponent places his Giant right at the bridge, he will be most likely throwing a Balloon right after that. If Giant is placed in the far back, it will be either 3 Musketeer, Sparky or Musketeer behind him.

Prince can do tons of damage while charging and can solo kill your Tower very quickly If you don’t pay enough attention. He is usually protected by a splash damage support troop, which can remove all distractions.  Prince is usually used in P.E.K.K.A Double Prince Deck and Hog Prince Deck.

Baby Dragon is another versatile card which can be used on both offense and defense. It’s pretty hard to find out what strategy your opponent based on the Baby Dragon. At high Arenas, it could be Lava Hound deck.

Skeleton Army is mainly used on offense to deal with Prince, Hog Rider, Royal Giant, P.E.K.K.A, … People rarely use it on offense because it can be easily countered. If your opponent use SA on offense, he is likely a newbie. In high Arena, some players use Skeleton Army in Arrows-bait decks, which force you to defend with Arrows/Zap first then they will throw Goblin Barrel on your Tower.

Witch is mostly placed after a tank because of her low HP and high DPS coming from her Skeletons. People usually use her in Hut Decks, Giant Decks and Royal Giant Decks. 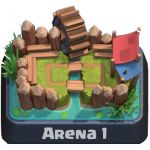 Spear Goblins: Cheap supports which can be placed behind tanks in almost any deck. This card can’t reveal anything about your opponent’s strategy.

Goblins: Same as above. Goblins are usually used in Hog Rider Decks and Miner Decks.

Goblin Hut: This card is usually used in Spawner Decks and some Royal Giant Decks.

Valkyrie is very popular these days and can be placed in loads of decks. In high Arenas, you can usually see her in Trifecta Deck, Royal Giant Decks and Mini P.E.K.K.A Valkyrie Deck.

Lightning: Truly, most players who start with Lightning are inexperienced players. This indicates that your opponent doesn’t know how to play his deck properly.

Goblin Barrel is usually used to bait out Arrows or Zap in high Arenas. This card can deal tons of damage If ignored. In some decks, your opponent drops his Giant/Giant Skeleton right at the bridge to soak damage and distract your Tower, then throw the Barrel right on top of your Tower. 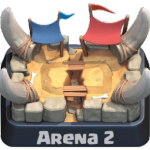 Skeletons:  This card is mainly used on defense and can be placed in almost any deck, from low cost Deck to high cost Deck. However, people often use it in cheap Hog Rider Decks and cheap Miner Decks.

Minions: Same as above. This card doesn’t reveal much about your opponent’s deck.

Tombstone sometimes can be used as a part of the Spawner Decks. Since it’s essentially a defensive building, it doesn’t reveal much about your opponent’s strategy.

Bomb Tower is essentially a defensive building. It doesn’t reveal anything about your opponent’s strategy.

Giant Skeleton can be used on both offense and defense. It is pretty hard to figure out your opponent’s strategy based on this card. But, after I posted

Balloon is a slow card which has very high damage, just behind the Sparky. At this time, most Balloons are used in Giant Balloon Decks and Lavaloon Decks. 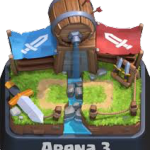 Cannon is essentially a defensive building card which reveals nearly nothing about your opponent’s strategy.

Barbarians are usually used on defense due to their slow movement speed. Same as above, it reveals nearly nothing about your opponent’s deck.

Rocket is usually used in Rocket Decks and it is usually the main damage dealer of the deck.

Barbarian Hut is used in Spawner Decks most of the time. Sometimes people use it in Royal Giant Decks too.

Rage is usually used in 3 Musketeer Decks, Giant/Musketeer Decks and Giant Witch Deck. It is literally one of the worst opening cards. If your opponent drops it first, that would be a mistake. Otherwise, he is trying to give you free trophies. 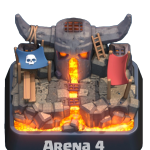 Tesla, Inferno Tower: They are defensive buildings and of course it can’t reveal anything about the deck it is placed in.

Minion Horde is sometimes used to bait out Arrows. Be careful If your opponent plays this card first at the first moves.

Hog Rider can be used in either Hog Decks or Royal Giant Hog Rider Deck.

Freeze is not used a lot as before. You can see Freeze in Hog Rider Freeze Deck and  Goblin Barrel Freeze Deck.

P.E.K.K.A is usually coupled with double Prince. Otherwise, P.E.K.K.K.A Poison with the support from Wizard is also pretty popular these days.

Lava Hound is used in Lava Hound Decks of course. 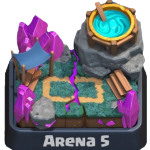 Zap is very common. It can be seen in almost any deck and it can’t reveal anything about your opponent’s strategy. Also, If your opponent starts the battle with the Zap, trust me, we don’t know what he is thinking about.

Fire Spirits: This card is used a lot these days as it can 1 hit Goblins and Minions. I agree that it can be placed in all decks but at this time I usually see people using it in Hog Rider Decks, Miner Decks, Mini P.E.K.K.A Decks and Royal Giant Decks. Anyway it’s still very hard to find out your opponent’s deck based on Fire Spirits.

Furnace is very popular these days in Arena 9. People are using it in Miner Cycle Decks, Hog Rider Decks and Giant Poison Decks.

Mirror: This card can’t be played as an opening card so I am going to skip this.

Ice Wizard is super useful can can be used in almost any deck. He reveal nearly nothing about your opponent. 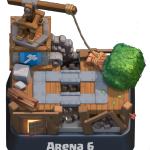 Mortar: If your opponent places it down right at the bridge, he is running a Siege deck. If he places in front of the King’s Tower, He will likely place a Royal Giant right after that (The Mortar will protect the Royal Giant).

Elixir Collector: Truly this card can’t reveal much about your opponent’s strategy. We can use it in both high Elixir and low Elixir cost deck.

Golem: Your opponent is running Golem deck, of course. Prepare to deal with tons of cheap troops behind him. If you have Hog Rider or Prince in your hand, consider placing it as soon as possible to force your opponent to defend.

The Log: It can’t reveal anything about your opponent’s deck.

Sparky: Your opponent is running a Sparky Deck and he will be about to place a Giant/Royal Giant right in front of the Sparky. There are also some Siege Decks out there which use Sparky to protect X-Bow/Mortar. 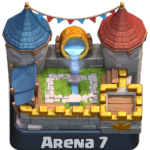 3 Musketeers: If your opponent split them up, he is likely running a Giant Musketeers Deck. Otherwise, he will be trying to put a P.E.K.K.A/Golem in front of them. Usually people don’t place it down first due to the very high Elixir cost. This is also an surprising card which is usually used at the x2 Elixir time.

Guards and Princess can’t reveal anything about your opponent’s deck since they are essentially support cards. 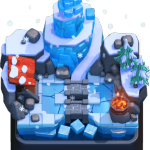 Ice Spirit is usually used in Hog Rider Cycle Deck and Sparky Decks these days. Anyway it still can’t say a lot about your opponent’s deck as it is very versatile and can be placed in loads of decks.

Bowler is usually used to protect Giant, Sparky, P.E.K.K.A and Golem. I posted a great Bowler deck a few days ago, you can take a look at here for more details.

Lumberjack’s use is pretty similar to the Rage Spell. People usually couple him with Giant, Witch and 3 Musketeers.