The new Clash Royale Anniversary Event is live! And in order to get to the next stage, you need to win this Retro Royale Challenge! 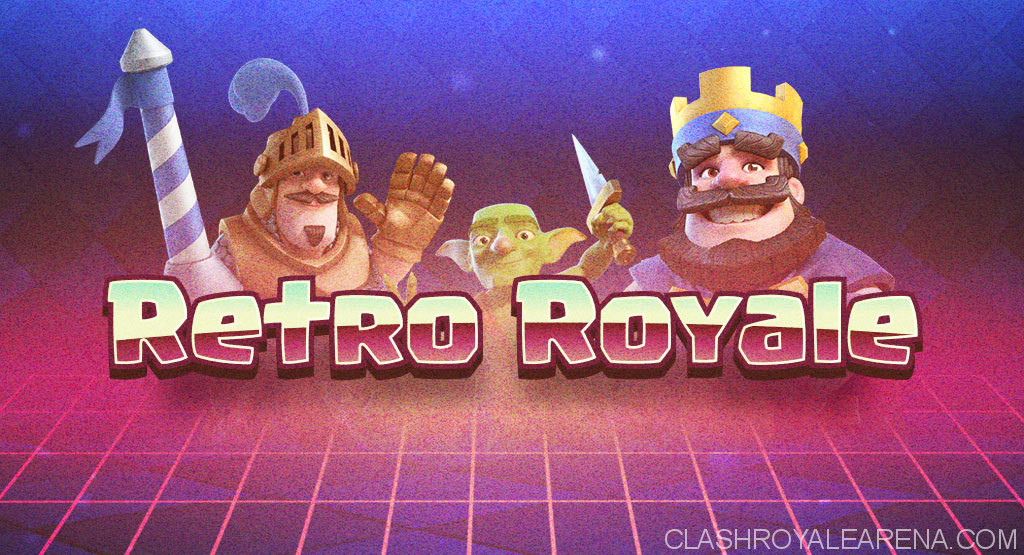 As I told before, Hog Freeze is gonna be popular. So I am gonna use it in the following deck.

This basically a cheap Hog Freeze deck which is actually quite powerful.

I am not gonna go deeply in this guide as its pretty simple to use and I don’t want to face someone and lose against him/her who using my deck.

This is pretty versatile deck which is strong is defense as well as offense.

You have the Retro (pun intended) Hog Goblins combo with Fireball and Zap which is actually pretty devastating.

Minions are probably the best card to use in Retro Challenge Decks as they are so good and versatile.

Use them on defense, offense and what not. Musketeer good support, the runner in this decks and a card having good range and DPS.

Cannon for defense against Hogs as you are gonna see them a lot probably. And Freeze the suprise element of this deck. Save it till you get elixir advantage and opponent least expects it.

You should read this guide about Hog Freeze for more tips.

Other Strong Combos for the Retro Challenge 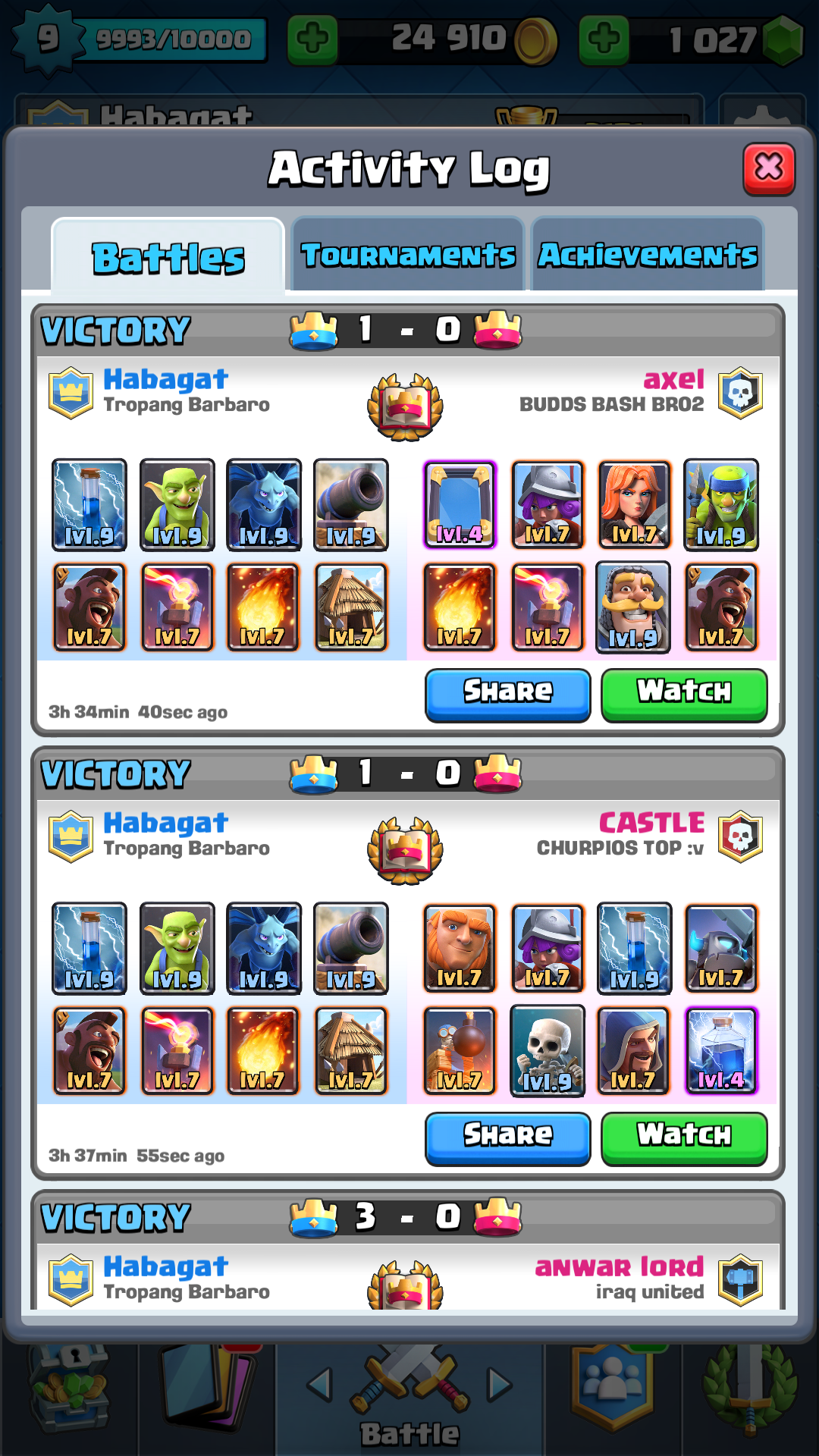 Hi guys, I’m Habagat and this is my first ever deck for Clash Royale. I’ve been lurking here for quite some time now and I though it’s about time for me to share some little knowledge that I have.

Alright, so everyone now is enjoying the new tournament called Retro Royale. It can never get as nostalgic as it is since the players seem to be transported to the past and play the game like it used to be.

This deck of mine is my go-to deck ever since I hit the Legendary Arena at Level 9 F2P. It is completely off-meta that can counter any deck types.

It is also, arguably, the most balanced deck in terms of offense and defense.

Hog Rider – This is the main win condition of the deck. It’s focus in attacking the tower – be it a one-hit or two-hit raid – can spell big difference in the outcome of the game.

Goblins – Cheap defensive troop that is good in either supporting the Hog Rider in offense, or the Cannon/Inferno Tower in defense, or in eliminating the likes of Wizards, Musketeers, or any solo troop that tries to attack your tower.

Minions – This is basically the flying counterpart of the Goblins. Good in eliminating the Miner or Goblin Barrel. Perfect support for the Hog Rider in offense, and for the Cannon/Inferno Tower in defense.

Goblin Hut – This building is the critical part of this deck as it plays a very important role both in offense and defense. Just like any type of offensive building (Furnace, Barb Hut, etc.), it attracts so much attention from your opponent as he needs to counter it with either Fireball or Rocket immediately. Otherwise, it Spear Gobs will hurt his tower slowly but surely. Later in this guide, I’ll discuss it’s very important role in defense.

Cannon – The initial counter for Hog Rider. This is also my main defensive card for Elite Barbs. Cannon plus Goblins can eliminate those Barbs with ease.

Inferno Tower – Best defensive building in my opinion. The good thing with having this is that most deck types don’t expect it, especially if I already played the Cannon. Most of the time, it distracts the opponent’s cycles and strategies especially those with Giant, Golem, Lava Hound tanks.

Zap – Cheap spell that comes in handy for the entire duration of the game.

Fireball – The go-to spell of this deck. Perfect for any kind of situations – offensive buildings, elixir collector, barbs, group of troops. etc. It can finish off the game as well.


Average Elixir Cost is 3.5. Not really cheap, but not expensive either making it a well-rounded and most balanced deck. Not to mention that it only has 2 Rares, the rest are commons. Perfect for Retro Royale tournament.

Okay, so the basic start of this deck is for you to play the Goblin Hut and position it right on top of the King’s Tower (center)

I normally choose the left side since most players attack from their right. So the Hut will be in the center-left, directly on top of the King’s Tower. This position will also allow you to use it as your secondary defensive building as it will pull the Hog Rider or the Giant or the Elite Barbs to attack it once they are done with the Cannon or with the Inferno Tower.

In the process, saving your Tower from getting any damage. 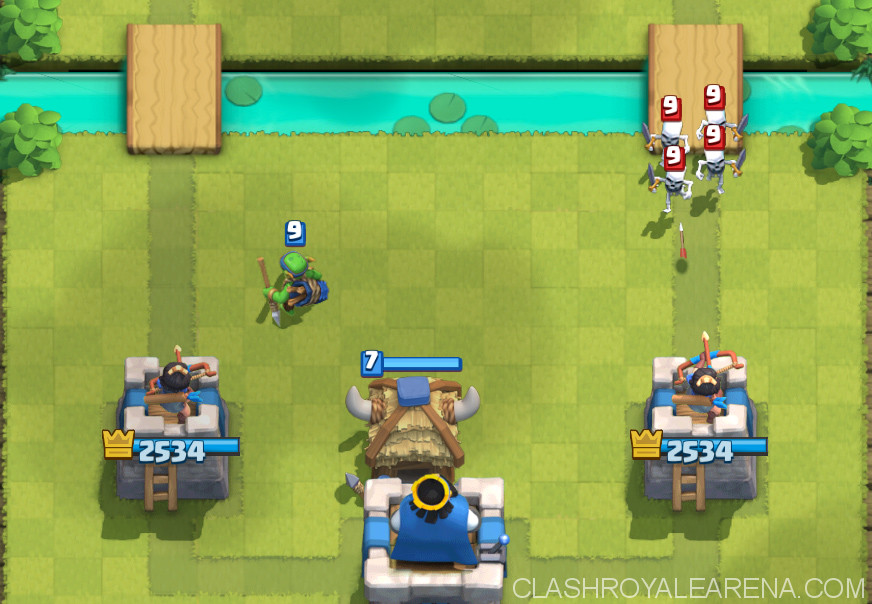 Your next move will depend on his reaction to your Hut.

If he plays a Giant at the back, on your left lane, then prepare your Inferno Tower and Fireball since most of the time the Giant will be supported by a Witch.

When his Giant approaches the bridge, drop your Hog Rider in the opposite lane

The possible scenarios are either he drops the support to his Giant which will leave him defenseless to your Hog, or he’ll counter your attack with any troop or building leaving his Giant push pretty much useless.

The general rule of course in playing against Tanks is to never ever engage in a same lane counter push.

If he decided to change his focus in the same lane where your Hog Rider is attacking, then might as well shift your push to the opposite lane.

Disrupting his strategy will give you superior advantage since your deck is primarily built for defense and sneaky offense. 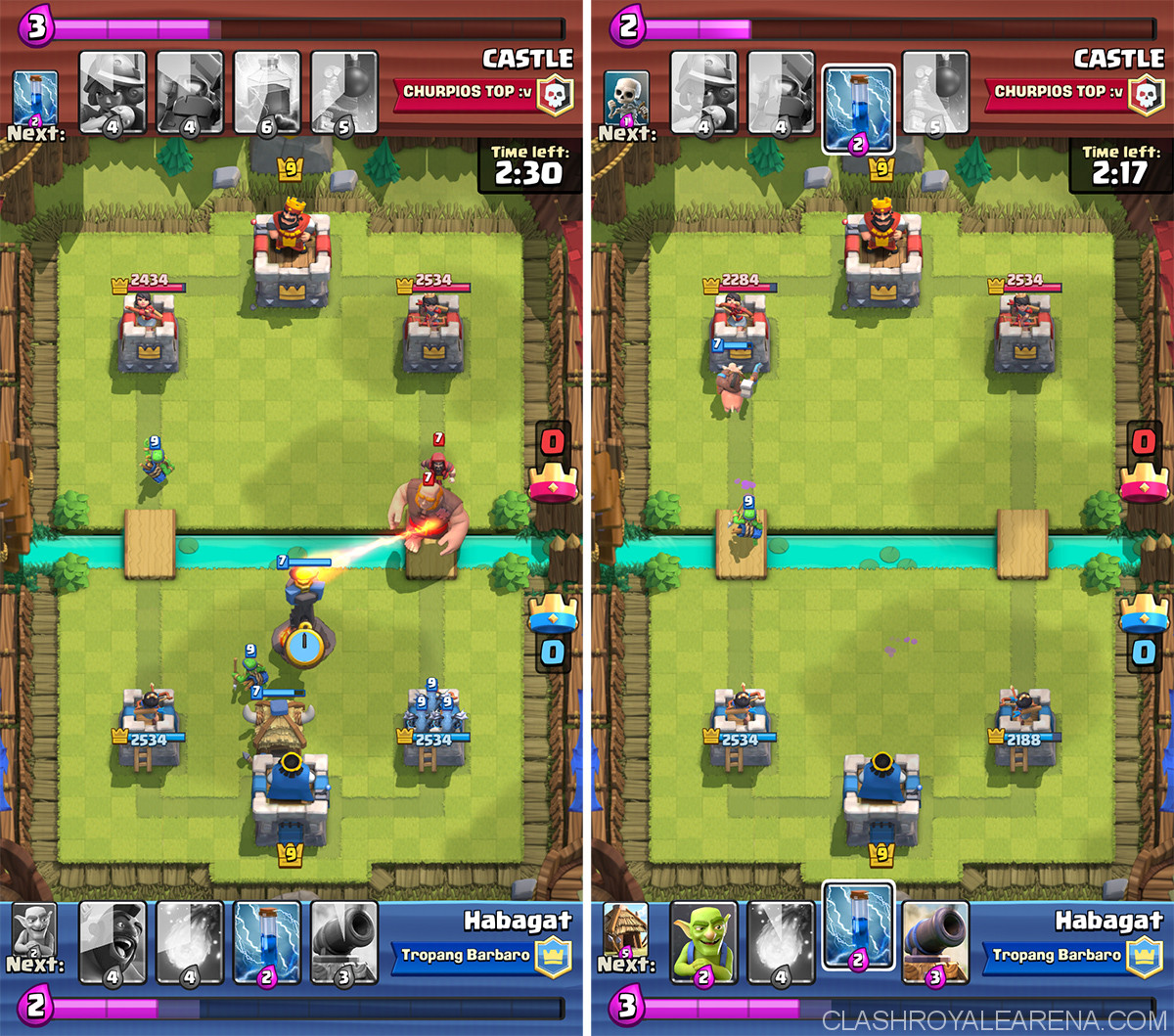 If the hut is not available in your starting hand, then you can try using your Hog as initial play.

Try to size up his cards and play your Hut as soon as it becomes available.

If he’s using a fast-cycle deck featuring Elite Barbs, the main counter is your Cannon and Goblins/Minions.

Maximize the use of your Zap and Fireball.

Remember that fast-cycles are dangerous in double elixir time, so the usage and positioning of your Hut plays an important role. But since we’re talking about the Tournament, no need to worry for the Elite Barbs, lol! 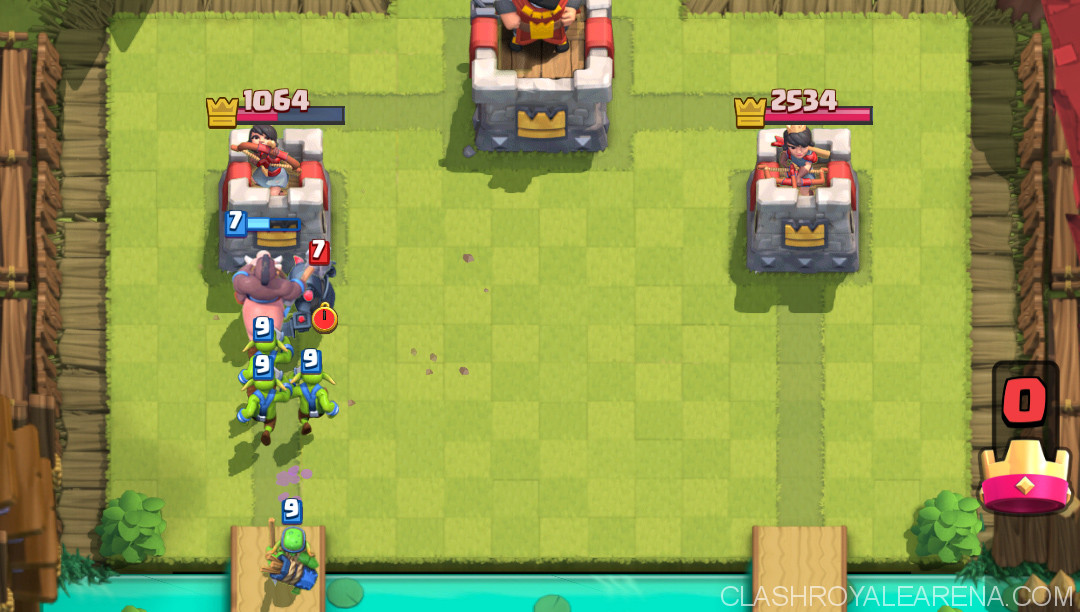 Their normal counter to your Goblin Hut is that they play their Musketeer at the back of their Tower. Then of course, when the Musketeer is in the bridge already, they’ll surprise you with the Valk+Hog combo making it a very deadly push. Not even your Cannon + Goblins + Hut can make a stand against that. So never let that happen.

Enter the Fireball strategy. Immediately after he drops his Musketeer, Fireball it. One Fireball plus one hit from the Goblin will kill that push. A Valk+Hog push without a Musketeer can be taken cared of by your Inferno Tower putting him in an elixir disadvantage.

The only loss that I suffered so far is against a Hog-Freeze user. And it was more of eagerness error on my part in the last 10 seconds when I tried to become aggressive.

Remember that the deck is meant to defend more than to attack. So choosing to become aggressive should be very much calculated.

Freeze user will often surprise you, but since you have the Cannon to counter his Hog, he’ll have a hard time deciding whether he’ll play his Freeze right away or just wait for the moment when the Hog reaches your Tower. But mind you, with the positioning of your Hut, his Hog will never reach your Tower, leaving him in a difficult situation to play his Freeze. 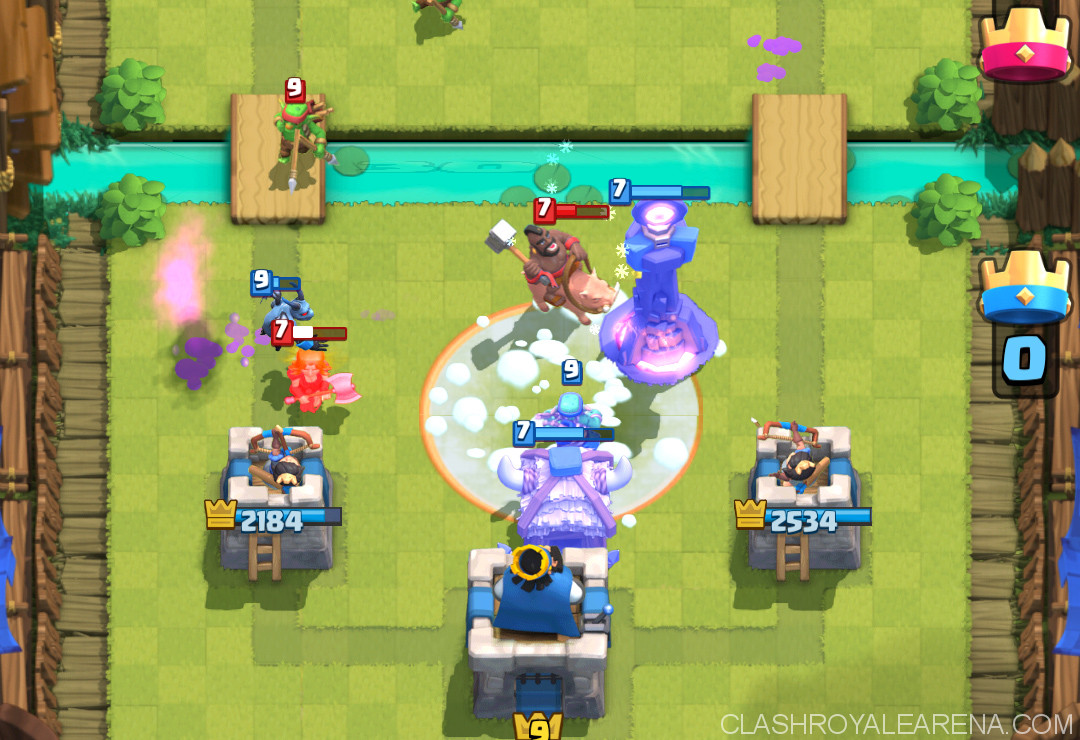 Against the Mortar/X-bow user, which is very rare in the Tournament, you should be playing it with ease since you have the proper buildings to counter.

Just don’t let him surprises you, or else you’ll get overwhelmed and will destroy your cycles. 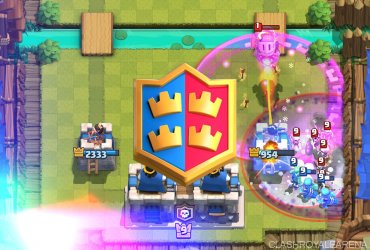 It’s awesome to hear that we are going to have the next huge 2v2 special Challenge, the 2v2 Double Elixir Draft Challenge. Here, I am going to give you the … 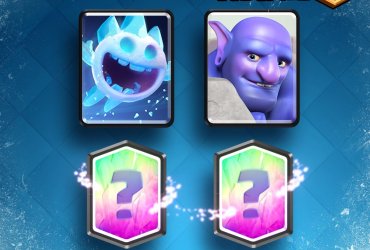 In the upcoming Clash Royale July Update, there are 4 new cards in total: Ice Spirit, Bowler and 2 new Legendary cards, which will be revealed soon today! I am …