Hi, this is TheRealPlayerG with a deck guide here. This deck got me from 3000 trophies all the way to 4000 , to where I finally got my first legendary trophies! A 1000 trophy increase with one deck! It does have two legendaries though, so you might not be able to use it. 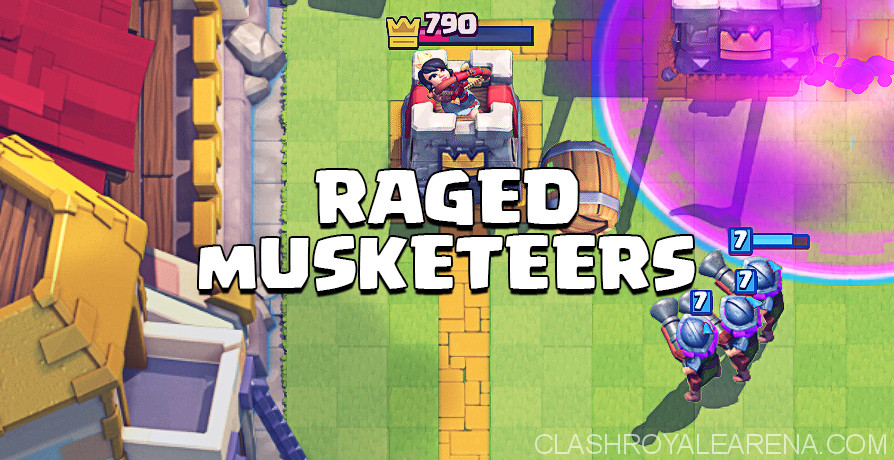 Update: Hey guys It’s Will! I used this deck and got 11-3 in Grand Challenge today on the first try. This deck is so reliable and funny to use! Just give it a try and you guys will like it for sure!

Giant: Not really to much to say about the Giant, because his role in a deck is easy to understand, be he is definitely your main tank. The Giant is really good for this deck as with support he will easily take the damage while doing some to the tower. An unprotected Giant will easily do hundreds of damage to a tower.

Three Musketeers: These three thundering gals will scare the the living daylight out of your opponent if they have no spell. Anyone seeing Three Musketeers charging down the lane WILL try to instantly take care of them. These gals are your main win condition
They are good for support, offense, and even defense if you need to defend a huge push and then counterpush.

Lumberjack: All-around amazing. The Lumberjack is good for everything. It can kill a lone Princess that keeps sniping your tower, take down the Miner chopping at your elixir collector, kill a Hog Rider before it gets 2 hits on your tower, and if there is a tank with some backup, the Lumberjack can take out the support, then start going after the tank.
On top of all that, imagine someone taking out the Lumberjack, then the Rage dropping right on top of the Three Musketeers. Now, THAT, is scary.

Miner: Your secondary tank. The Miner is good in this deck because of the fact that he is very tanky, so you can use him in a lot of different situations. you can use him to help defend that charging Prince or Hog Rider If you don’t have any other good defensive cards in your hand.
He can also be used to help fortify a big push if you want to add more troops, or it can be used to tank for other troops,  If the opponent has a spell and you have to split push.
Giant almost dead? Send the Miner to continue tanking after he has died.
He can also be used along with a zap to take a tower down from 500 or so if there’s not a lot of time left.

Mega Minion: The Mega Minion is good in this deck because he can really give your opponent a headache. He can be used really well on defense to help take out a Valkyrie or something else that can’t attack air.
He can be used to help take out a Lava Hound AND its pups if you don’t have enough elixir to use the Three Musketeers.
He can also help you split push on offense.

Ice Spirit: This little bugger can be used in a lot of different ways too.
He can be used to help stop a Minion Horde coming towards your tower, he can stop a Skeleton Army from being to big in numbers, he can even stop that Royal Giant from getting off the last shot to kill your tower. And he might even be the most important card in this deck.
One of the BEST counters to Three Musketeers is Barbarians and/or Skeleton Army. The Ice Spirit can freeze those pesky swarms long enough for the Musketeers and the support to kill them.

Zap: Another card I don’t need to explain.
Takes out Skeleton Armies, Minion Hordes, Goblins, Spear Goblins, and other troops. Makes troops, buildings, and towers change targets. Can help clear out the cheap stuff around a miner to help it kill a building/tower. Resets Inferno Towers/Dragons. It’s super useful in every aspect.

Elixir Collector: This deck is kinda high in elixir, so along with making positive elixir trades, the Elixir Collector helps you stay in control of your Elixir.

The ideal gameplay style of this deck is just put the Giant in the back, followed by Three Musketeers, then the Lumberjack, then Mega Minion, then keep putting things down. But that can’t always happen because of people with spells like Fireball, Lightning, Poison and Rocket.

Another good way to win is if they have a big push coming at your second tower, and you both are tied, in overtime, I’ve won many battles this way, just don’t defend, save your Elixir, and send three Musketeers at the corner and they will take it out most of the time.

All in all, this deck is really fun to play with, and it will get you a lot of wins. Most of them will be Three Crowns.

This deck is really good if you need to fill up your Clan/Crown chest, and if you want to push high up in trophies. 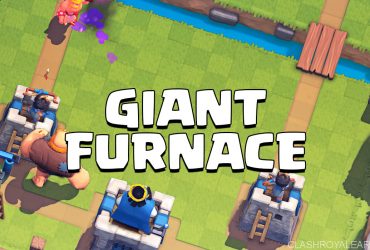 Hey, Cory here. You might recognize my name from moesports. Today I’m going to show you a Giant Furnace Control Deck that got me to Legendary Arena as a level … 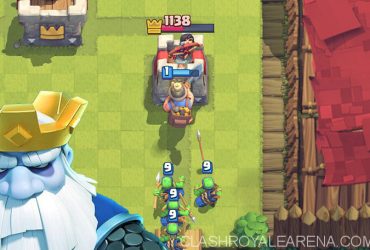 Hey guys! Its Blaze Stone back with another guide for you all! Today, I will be showing you guys an extremely powerful Pekka Miner Poison deck with Goblin Hut and …