Hi guys, this is $wag Money with my second deck on CRA, this time with an interesting off-meta deck one of my clanmates Jallo reccommended to me.

It’s great for climbing trophies to get into Legendary Arena, and it still retains its power even though it features a card that’s rarely used at the top: Rage!

This deck revolves around the Balloon Rage combo, and constant cycling to overwhelm your opponent when their counters are down.

Balloon has mediocre speed and a really low attack speed, so when combined with Rage, its DPS is drastically increased.

No legendaries are used in this deck, but if you have some you can try and replace cards based on what you feel like is best. 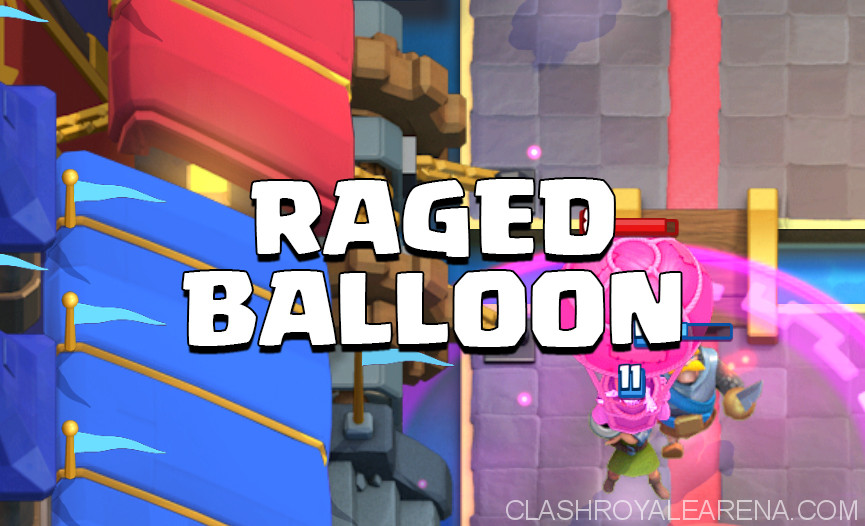 If it gets to the tower, it can deal devastating damage to it, taking out an Arena Tower in 3 shots combined with its Death Damage at Tournament Standards.

Like with Hog Cycle decks, Balloon is the card you’ll be cycling to. However, it has some advantages over the Hog.

However, Balloon is slow and and easy to counter. Cycling helps remove the easy-to counter con, allowing you to overwhelm your opponent when their building or troop is off rotation.

To get rid of its slowness, you Rage it! Rage will boost Balloons speed powerful enough for it to outrun Minions and Mega Minions, and also significantly increases its DPS.

More on Rage next:

Rage: This card is considered terrible by most players, because Lumberjack carries a free Rage, and is only used by low Arena players.

Rage is considered a spell “used when you are already winning to win even more”. However, in this case, Rage is a supporting Spell to help your Balloon reach the tower.

Like mentioned before, Raged Balloon can outrun Minions and Mega Minions, and if they have a defensive building, it’ll get destroyed by a Raged Balloon.

Here’s the thing that makes the Spell better than Lumberjack: The duration. A level 4 Rage will last long enough to help Balloon take down a defending building while still retaining the boost to reach the Arena Tower.

You can opt to replace it with Freeze or Fireball, but I actually had more success using Rage than the other two spells. Not only that, its always fun to surprise an opponent with a Rage. Not only that, Raging Balloon can make a Rocket miss.

Ice Golem: You’ll need this guy to help tank for your Balloon. This is also a staple in any Cycle Deck because of its cheapness, beefiness, and utilty.

On defense, he is great for kiting enemies and soaking damage from support units.

Take a look at here for more details!

Skeletons: Yep, these guys are also present in any cycle deck, and this one is no different.

Usually these guys are for cycling to your Balloon or for defense as distractions. When placed correctly, they can even kite air units like Baby Dragon and Mega Minion. Its hard to counter defensive Skeletons because they are so cheap it usually gives you an elixir advantage.

Ice Spirit: The other one elixir troop is also used for the same purpose. Cycling and defense. However, he can also be used in offense to help freeze some defending units and buildings.

Ice Spirit plus Zap should be able to take out Minion Hordes. If Ice Golem is off rotation, tossing Balloon with this guy will work, but not as well. We do not run a building in this deck, so Ice Spirit may be needed to prevent building targetting troops to reach your tower.

Rarely will you use this guy on offense, unless he is a leftover supporting unit for your Balloon pushes.

You can switch this guy out for Inferno Tower to have a more solid defense, but its always to fun to watch a Raged Mini-Pekka and Balloon go hand in hand and demolish buildings.

Minions: Your go-to tank shredding defending unit for other things, like Lavahound and Balloon.

These guys are your only air defenders besides Ice Spirit, so this deck may be a little weak to heavy Lavaloon decks.

After a successful defense, Minions can assist your Balloon by pushing it faster.

Zap: There really is no point explaining this card. Combined with Ice Spirit or Ice Golem death damage, it clears the way of Minions and Minion Hordes.

It can reset Inferno Tower, Sparky, or Inferno Dragon, and stall time for your Balloon to get one more hit off. I don’t reccomend switching Zap for Log because Zap can target air.

Against Zap bait decks, save the Zap for the Goblin Barrel, even if it doesn’t kill. Minions can deal with Skeleton Army and Ice Spirit and Ice Golem can deal with Minion Horde.

In the early game it is a good idea to get a feel for what your opponents deck is, what their defenders are, and how fast it cycles.

Tossing out Ice Golem, Ice Spirit, Skeletons, or Minions to cycle and invest. Supporting any of them with Balloon for a quick mini-push to Scout for counters.

After successfully defending their counterpush, you can cycle back to Balloon before they cycle back to a defending card, in which case you can build up a push and support it with Rage.

Rage will catch them off card and force them to panic, playing Minion Horde in the wrong position to cause them to all blow up from Balloons death damage. Raging early before knowing if your opponent is in a bad position is okay too, as Rage can cause Balloon to get off a shot it normally might not have.

In double elixir time, everything holds true as before, but you’ll be cycling even faster. Try to Rage your Balloon all the time in your pushes. It may seem like a waste, but Raging a Balloon can cause it to outrun Mega Minion, potentially taking less damage than it normally would have. Normally you should be able to cycle back to Balloon before your opponent can cycle to their counters.

Rage is often considered the “Win More” card, a card just for fun to demolish your opponent even more. But with this deck, make your stockpile of 52 rages viable again! I have tested this in Challenges and have gotten a 12-1 win and 12-2 win in Classic, but I feel this deck will work better on Ladders if your Rage is a higher level.

See you in the Arena!