Hey guys! Extamyte here with another guide. Today, of course, we are gonna talk about the topic new players always ask: “How to be a better player at Clash Royale?”

Now, in Clash Royale, much as you like to spam all your troops down the arena like in Clash of Clans, this is not supposed so in this game. Firstly, patience is the key in the game.

Making bad misplays like placing the Bomber in front of the Giant can put you at a disadvantage as they can backfire you immediately.

So, here are some things you should NEVER do in Clash Royale.

All these things can lead to a loss as you allow your opponent to gain an advantage, be it on elixir or a push.

Couple things can decide your victory of a match: Tip #1: Bait out the counter to your win condition

If you know your opponent has Skeleton Army for your Giant, and you do NOT have a counter for the Skeleton Army, try baiting it out by using Knight or Mini P.E.K.K.A.

However, it is best to know your win-con’s weakness first, which brings us to the next tip.

No deck is perfect.

However, you can make it nearly perfect if you know your deck’s weakness.

If you are running a Control deck, you need to know that control decks are weak against siege decks like X-Bow cycle. So, to counter X-Bow, you may want to include a Hog or a High-damage spell like Lightning or Rorket.

If you are using Golem, 2 hard counters are Minion Horde and Inferno Dragon. Include Arrows and/or Electro Wizard as they are the hard counters for the cards respectively. Try to spend as less elixir as possible as you may lead yourself into an elixir disadvantage.

An example of a negative elixir trade is using the P.E.K.K.A instead of Goblin Gang to counter a Bandit.

Positive elixir trades include Rocket and Tornado when you Tornado a huge 15 elixir push and destroy it with a Rocket right in the middle.

Try to get as much value as possible of your cards.

Keep practicing and read our guides on Clash Royale Arena, you will know the best ways to deal with each situation. Tip #4: Don’t overcommit on a push or counter-push

Overcommitting in Clash Royale means spending too much than needed.

Usually, we like to stack up troops behind a tank to destroy the tower as fast as possible.

Do NOT overcommit in any situation.

Your opponent can easily gain an advantage when you make up your push by rushing on the other lane with any fast-paced troop like Bandit or Battle Ram. Also, what If he have a combo which can counter your entire push?

Thus, it is better if you save a couple of cards to counter them.

Firstly, it is recommended ythat our deck’s average elixir cost should not be over 4.5 elixir as the deck will be too heavy even with an Elixir Collector.

Also, do not go into ladder with an All Legendary deck. Not all legends can be used in the same deck. Much as we want to have as many legends as possible, there should also be a limit to a deck.

Take a look at here to read our quick guide on building your own almost-perfect deck! Tip #6: Know the cards your opponent has

By knowing the cards your opponents have, you will have a huge advantage.

You will know how and when to deal with them, when to push, when to spam troops, when to finish the Tower.

For example, If you know that your opponent has Hog Rider and no splash damage card, and you have Skeleton Army, simply keep it in your hand until they play the Hog Rider.

In lower arenas, players tend to mix up random cards together which make no sense at all, but does not matter as long as you memorize the cards in his hand.

More: How to Count Cards for Dummies

Tip #7: Don’t be discouraged when you lose

Try to find the reason why you lost, then analyze it, see whether if there is anything you can do to allow yourself to strategize better in the next match.

Remember, skill is important, so is your deck.

Learn your deck well, have faith in it, and don’t make stupid misplays.

That has been all from me today. Comment whether you find this article helpful or not!

Have a nice day ahead 🙂 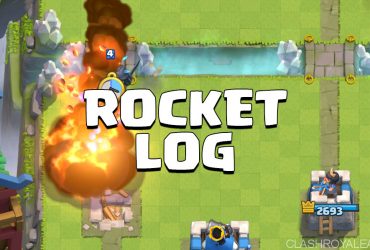 I saw some great ideas of the combo Rocket + The Log in the comment section, I decided to gave it a try and got lots of great results. This … 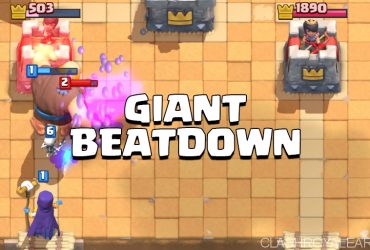 Hey, Nitrome95 here, coming at you guys with the Clash Royale Arena 2 Deck, Giant Beatdown, and my new series called “fundamentals deck”. Where did I get the idea? Well, I …