Hey guys, JesusSlark back here again. I’ve made a couple of changes to my old deck that got to 3000 trophies at level 8 and i’m gonna share my thoughts on that plus some new tactics that you can do. This deck is designed for high Arena 7 and Arena 8 only, so it might not work in lower Arenas. Up here, 90% of the time, you will face 2 decks: P.E.K.K.A Dual Prince and Hog decks. 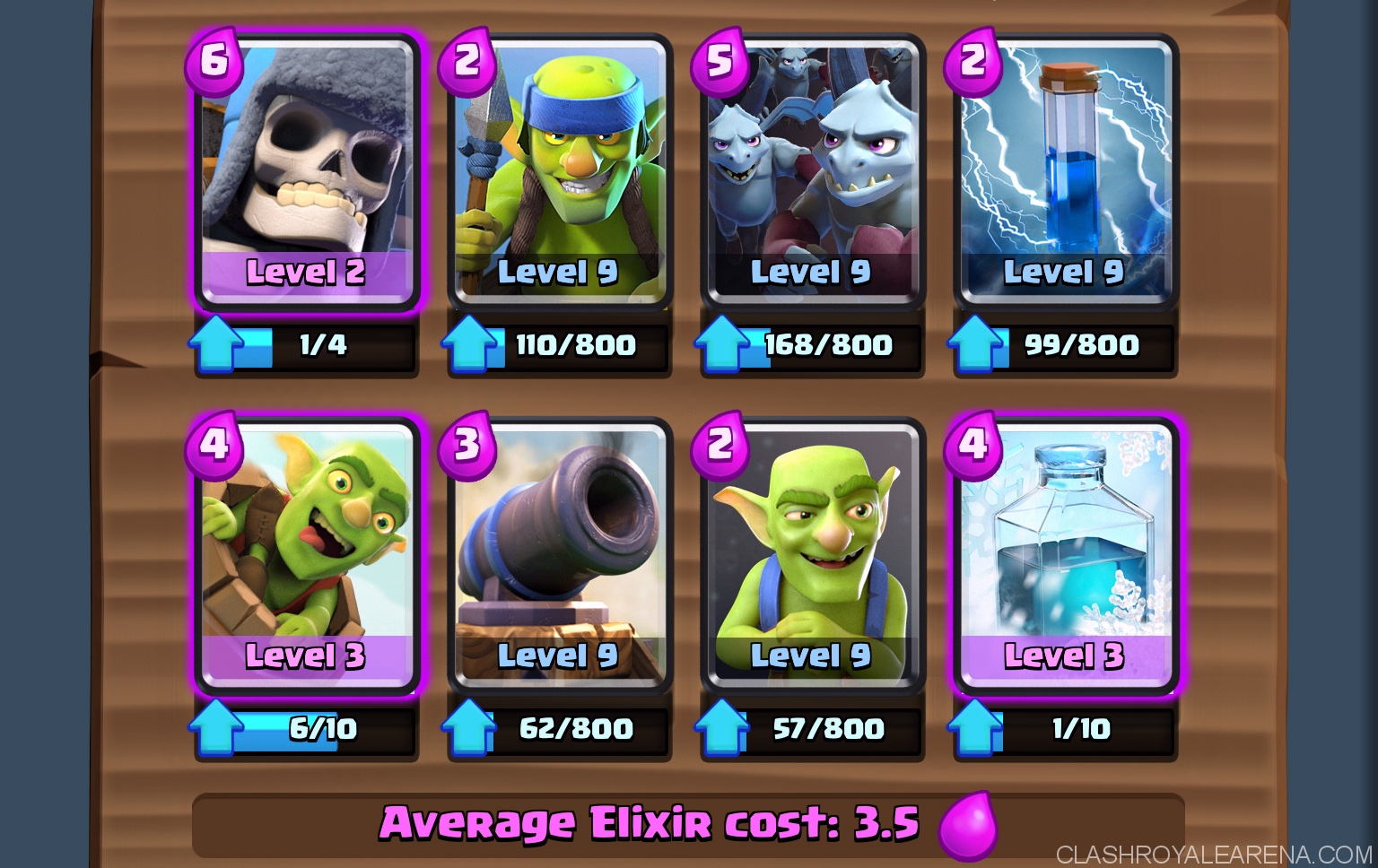 Push to Arena 8 with Arena 5 Cards

What I like about this deck is that it doesn’t matter if your opponent has level 6 Epics, or lvl 3 Legendaries, or level 9 Rares, or lvl 11 Commons. The only thing that matters is how you keep track of their AoE spells, when they have it and when they don’t. That is how you win with this deck. Lvl 7 Arrows and lvl 11 Arrows doesn’t make a tiny difference with this deck since your troops will still die to either one. This deck will take a lot of practice and skill if you aren’t used to it, even I still make tons of mistakes using the deck.

For more details, please take a look at here. This new deck is the re-mastered version of a deck I posted a few days ago! 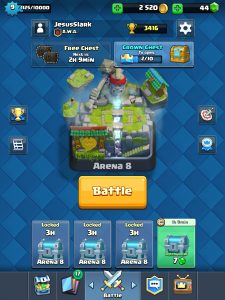 Princess With Small Tank – Cannon to distract and kill princess with Goblins or Minion Horde.

Goblins + Spear Goblins – Don’t underestimate these guys when at the back supporting the Giant Skeleton, they sometimes can take down a whole tower while the enemy is busy dealing with Goblin Barrel, Giant Skeleton and Minion Horde.

Why no Elixir Collector? – When you are facing people that is 1 or 2 levels higher than you, you can’t afford to be greedy. They will punish you really hard while you have 5 elixir lower than them and way higher leveled cards.

Zap vs Arrows – With the addition of the Freeze spell, I may be leaning towards the arrows more since both of the spells freeze. But, when you’re playing against higher leveled people, you need to milk every last drop of elixir efficiency in order to win. Not to mention, Zap has an instant cast time and can freeze for a second if you don’t have elixir for arrows.

Hog Decks – When playing against Hog Decks, try to save your cannon for the hog rider. If they push without using the hog rider, defend with other cards. Your tower will go down to level 8 and 9 hogs really fast.

How to use freeze – Don’t use freeze early into the game, get to know his cards first since if you freeze without knowing his deck, he may surprise you with a fireball or something after he used his arrows.

Thanks for reading guys! Don’t hesitate to ask If you have any question! Good luck with this Arena 5 deck! I hope you guys can push to Arena 8 soon with this deck!