I’ve used this deck from Arena 2 (with some minor changes) through Arena 9. It really shines around Arenas 5, 6, and 7.

This deck is great on defense, and then turning it into a counterpush. It has no problem defending most cards in the current Meta while making positive Elixir trades.

Since it is basically an Arena 2 deck (excluding Zap), it requires no skill to use and contains no Legendaries. Finally, this is a great deck for underleveled players, especially because I used this deck as a Level 6 in Arena 7. 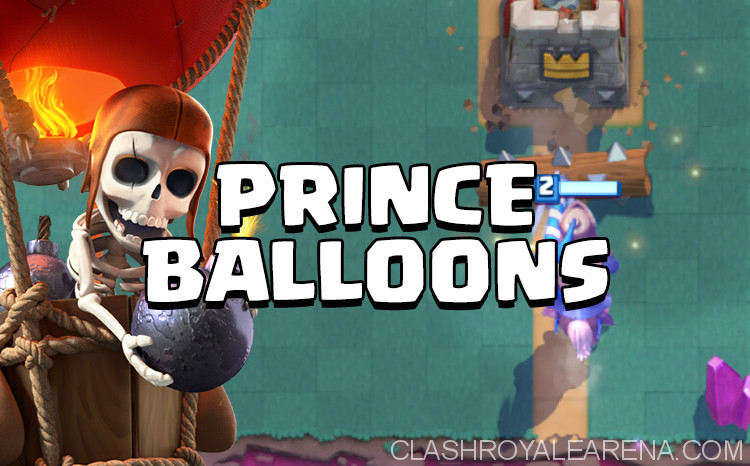 Prince: One of the main win conditions of the deck. He is mainly used for offense, and if paired with Valkyrie, is not easy to counter. If done right, the Prince will take out an Arena Tower and then some more, so he is devastating to your opponent. He can also be used on defense against Wizard and Musketeer, or against tanks like Golem and Giant. He is great for taking out tanks due to his damage, and his tankiness so he won’t die to support troops.

Valkyrie: Your main defensive troop. She is great against troops like the Graveyard, Musketeer, Witch, Wizard, Barbarians, etc. You can wedge her between them and a tank, allowing some Minions or Archers to kill it while she takes out the support troop. Because of her tankiness, she is great as a distraction for Mega Minions and, if in a pinch, help tank for Elite Barbs. On offense, she is a good mini-tank, and synergies well with Prince.

Balloon: Your second win condition. Use it to deal massive damage to an Arena Tower, and is even better when you catch them off guard or they have no Elixir. You can send it in with Valkyrie or alone. If sent in alone, remember to watch out for Minions, Minion Horde, Archers, Mega Minion, Ice Wizard or Musketeer, since they will not allow the Balloon to touch the tower. Pairing it with Zap will allow it one hit off the tower if they defend with Witch/Wizard. Great for instantly applying pressure to the tower and chipping the tower.

Tombstone: The Legendary defensive building. For only 3 elixir, it provides insane value, making it hard for Giants, P.E.K.K.A, Sparky, Prince, Hog Rider, etc. to reach your tower. It is a pretty straightforward card to use. You can substitute with Furnace or Goblins. For more Tombstone tips, please read this guide!

Archers: Also an insane value card. They can snipe down air units, and not get killed by Zap. They do pretty good damage, helping you take down tanks. If placed behind the Arena Tower, they won’t let Valkyrie or Skeleton Army get a shot off the tower.

Minions: Provides a lot of bang for your buck. It has a crazy DPS and is an air troop. Place it to kill Princes, Balloons, and all sorts of tanks from above. Otherwise, pretty straightforward.

Fireball: Instant damage spell. Use the Fireball to bring Witch, Wizard, Musketeer, Minion Horde etc. down to critical health, or kill them out. It can be used to finish off an Arena Tower at low health. On offense, you can prediction Fireball when pushing, devastating the opponent. Take a look at here to read more about the Fireball!

Zap: Small instant damage spell. If paired with Fireball, will kill Witch, Wizard etc. Also, great for taking out all sorts of small troops. Even after the recent nerf, it is still one of the most functional cards in the game. You can reset Sparky, Inferno Tower and Inferno Dragon. Pause an Arena Tower and a Witch to get a hit off with Balloon. Kill a Skarmy they used to counter Prince, having it decimate the tower. The possibilities are endless.

Right when you get into a battle, tap twice to skip past the intro and immediately place Balloon. Chances are they have little time to react, allowing at least a shot off.

From then on, defend any push they send at you, while making positive elixir trades.

Positive Elixir trades are the key to this deck. If they are down on elixir, immediately push with Prince or Balloon, and keep your opponent on his toes by constantly applying pressure.

When double elixir starts, bank elixir and counter your opponent’s push, and then add in a Balloon and/or Prince and watch their jaw drop.

Simply spam troops keeping in mind their defenses, and you’ll probably get at least two crowns.

Some strong combos to use are:

This deck is strong against Zap Bait, because there are so many cards to counter Skarmy and Goblin Barrel with. Also, not easy to use chip cycle on because of the many cheap cards to counter with.

This deck crushes Siege decks, including Hut Spammers. Just use Prince or Balloon on their buildings, and Valkyrie and Fireball on Hut Spammers.

Slightly weak to Beatdown, as all of the troops will crush your defenses. Just never let them build up a big push by pressuring the other lane.

To round this up, this is a fusion deck between chip and control. It is very annoying to deal with, and can make your opponent rage quit quite easily. Best of all, it is easy to use, usable for 6 Arenas, and contains no Legendaries. What’s not to love?

I hope you enjoyed my first ever guide on CRA. I hope you like this deck, and helped you climb in trophies. Thanks for reading, and see you next time!