Hi, I’m the InvincibleDabber7 and I want to share some of the most popular decks in the current meta. The statistics are based on Woody’s Popularity Snapshot, a list compiling the decks that the top 100 people used. 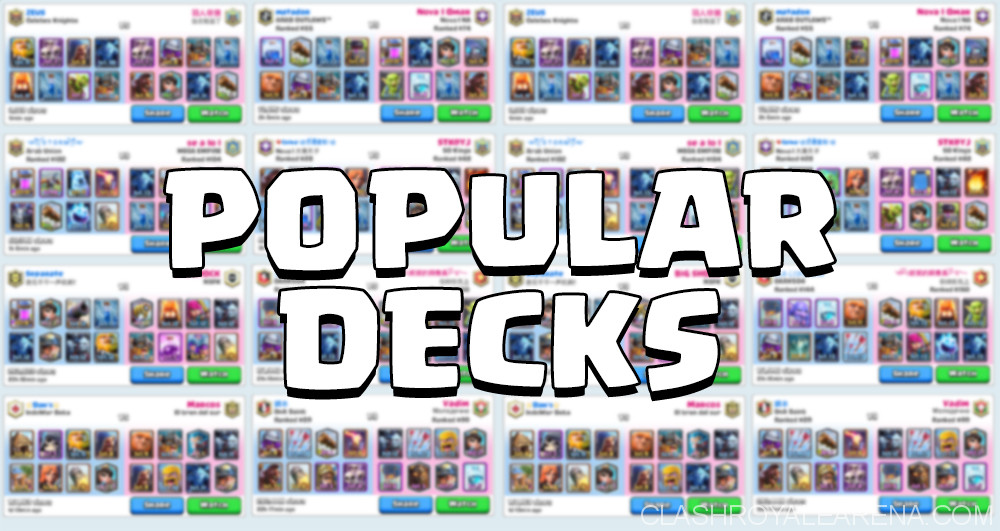 Most Popular Decks in the Current Meta

This deck relies on the Furnace to pressure your opponent. It is a passive structure which forces your opponent to make the first move, thus allowing for a measure of control. The Giant is the main offensive card, and is supported by the Lightning spell, which destroys defensive buildings and medium-health troops. The Prince is a high DPS dealer as well as the surprise card, making it the secondary win condition. The Log and Zap are the utility spells, eliminating swarms, as well as stunning your opponents cards. Lastly, the Executioner and Mega Minion/Musketeer and Minions are a strong defensive combo as well as excellent at supporting the Prince and Giant.

This deck is a fusion of Control and Chip. The Hog Rider is the main win condition, and use it with the Ice Golem for an excellent combo. The Ice Golem is also excellent on defense against swarms. Goblin Barrel is the other win condition, and try to bait out the Log or Zap before you use it. However, you can bait out the Zap with the Goblin Barrel, and thus they won’t have many answers to your Skeleton Army or Inferno Tower, the tank shredders of this deck. Add the Minions to the foray and you’ve got three High-DPS cards. Princess is an excellent chipper, splasher, and all around a great card. The Log is used as a utility spell, and if your opponent keeps playing Skeleton Army to counter your Hog, don’t be afraid to throw down prediction Logs.

Pump it up! The Elixir Collector is very important in this expensive Golem Deck, and is joined by the Tombstone, a defensive, but passive, structure. The Archers, Baby Dragon, and Mega Minion, form the defensive Trifecta – one ranged, one splash, and one high-DPS, and then transition into a threatening offensive when paired with the Golem. Golem is the main win condition of this deck, and it has the most health of any card in the entire game. Lightning is used to eliminate buildings, while The Log eliminates swarms and the like.

We pump up with The Elixir Collector. The Skeleton Army is used in place of a defensive structure, while the Mega Minion helps it eliminate high-health units. The Dark Prince or Executioner splash away smaller units, with help from the classic Arrows. Golem adds a bite to this deck, being an incredibly powerful and high-health troop, and Balloon goes right behind it, destroying towers along the way. But the real surprise of this deck is when you Rage it all up – say good bye to your enemy’s towers in a matter of seconds.

Yet again, we have the Furnace applying tons of pressure on your opponent, and when you pair these angry fire spirits with the mighty Royal Giant you crush and burn. The Lightning helps eliminate pesky Wizards, Witches, and Musketeers, while the Log and Zap destroy those incredibly annoying swarms. The Musketeer, Minions, and Skeleton Army destroy tanks with the help of your Furnace, while providing excellent support to your Royal Giant – especially Minions for distracting defensive buildings like the Inferno Tower, Royal Giant’s worst enemy.

The Hog Rider sprints away and off towards your enemy towers, supported with many – such as the evil, greedy, green Goblins. With this combo, execute Pig pushes and bypass pesky buildings. However, this deck has no defensive building, but it does have the Elixir Collector, which helps the deck cycle a lot faster. As well as the Goblins, the Mini PEKKA deals incredible damage and shreds Giants, Golems, Hogs, and the like. Minions also deal high DPS, and are a great support for the Hog. Princess is excellent all-around, but its main use is chipping at towers in this deck. The Zap destroys Skeleton Armies, and with the Princess destroys Minion Hordes. Lastly, the Freeze spell adds an element of surprise in this deck, and paired with the Hog it is absolutely devastating.

The Lava Hound soars above ground in this air deck, and is a meat shield for the incredibly powerful Balloon. The Fireball destroys most of the counters to the Balloon, as well as being incredibly valuable on defense – and it is joined by the Zap spell, which has excellent synergy with the Fireball. The Mega Minion and Minions support the LavaLoon combom while also helping out on defense. The Skeleton Army destroys tanks on defense, along with the Tombstone.

The Skeleton Army is a powerful tank-shredder on defense. Zapped? No problemo. Just use Mirror to surprise your opponent. The Mirror works particularly well with the Goblin Barrel – they have to let either one go. The Furnace also is an extremely annoying card when it comes down to it. And the Minion Horde can absolutely obliterate opponents if you don’t have your counter in cycle. The Log is used in this deck with lack of a hard counter to Goblin Barrel. If you use the Miner and Bowler, this deck will be played in a control-style, counterpushing with the Miner and defending with the Bowler. If you use Bowler and Fireball, you use Bowler as the main tank. If you use Rocket and Fireball, you play this deck like a Siege deck.

Yes, even after half of the cards in this deck were nerfed, this deck is still here. The Archers and Mega Minion have been replaced by the Musketeer and Minions after the nerf to the former two. The pair are excellent against air combos. The Bowler is a defensive card and is excellent at transitioning from offense to defense, and paired with the deck’s win condition, the Graveyard, is a formidable combo. Freeze is strong with the Graveyard and can devastate a tower in mere seconds, and joins Zap, the utility spell of this deck. The Ice Golem is also effective at tanking for the Graveyard, while can also be used defensively. The Tombstone is the defensive building in this deck and can apply pressure when needed.

Thanks for reading! I hope you enjoyed my guide and try to use one of these decks!

Just remember, if you try to make a replacement – SYNERGY ABOVE ALL