Hey guys, Corrosive Logic here again with another deck guide. For those of you who don’t know who YoutubePongTV is, he is an exceptional Hog player and one of the most original deck creators that I have seen.

He has a deck that is practically considered “The Pong Deck”, which consists of Hog Rider, Ice Wizard, Princess, Ice Golem, Guards, The Log, Mega Minion and Rocket.

He has used this deck throughout multiple different meta’s, currently he uses variations of this deck sometimes with Mini P.E.K.K.A, Skeleton Army, or even Lumberjack. 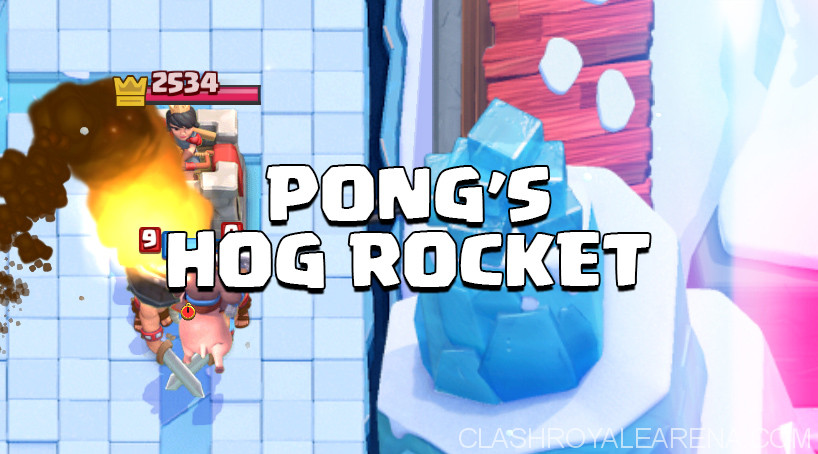 I made a variation to Pong’s deck which I name “Pong’s Logic”, and it is a simple F2P modification of his original deck!

I originally just made this for a friend to help him reach frozen peak, and I have his gameplay in my video below.

Because he had not reached Frozen Peak beforehand, I never placed Ice Golem in this deck. But I’m sure this deck can work well in Arena 8 and 9, just make sure to sub in the Ice Golem for Musketeer or Archers.

Before you even think about using this deck, you must first understand Pong’s playstyle which I have based this deck around.

The first thing you will notice in the deck is the Rocket, and he uses this extremely well to kill troops placed behind the tower while at the same time doing lots of crown tower damage.

The next thing you will notice is that Pong has no buildings in his deck. If his opponent plays a tank at the back he always goes all out aggressive with a Hog push. This means his opponent will not be able to use all their elixir to support their tank. So Pong is now able to counter the tank with Mini P.E.K.K.A/Skeleton Army/Guards.

Hog – This is a no brainer. The Hog is this deck’s main win condition, it is to be used aggressively, specially when your opponent plays a tank at the back. In addition, in some cases, you can couple Hog Rider with Mini P.E.K.K.A to bypass buildings!

Rocket – If you are equal on Elixir it is good to rocket any 4 elixir+ troop placed behind the crown tower as long as you can damage the tower too. 3 elixir cards can also be okay to rocket if you have no better play to do. Prediction Rocket on Barbarians/Horde are also very good on your Hog pushes. In our current meta Elite Barbarians are all over the place, if you can prediction Rocket Barbarians on your Hog push, you are doing extremely well!!

Zap – This is the F2P replacement for The Log. When I was playing in Frozen Peak I noticed that 90% of my opponents had Skeleton Army. So on your Hog pushes make sure you have Zap ready to drop on Skeleton Army instantly in order to prevent damage on your Hog.

Archers and Musketeer – These are the F2P replacements for ice wizard and princess. They provide very high DPS for defense. Ideally you want to place them on either side of your tower to kill the tank, then use skarmy/guards/megaminion/fireball in conjunction in order to kill the tank’s support troops. These defenses can be converted into very powerful pushes, but just be careful of fireball.

Mega Minion – Another no brainer, versatile, cheap, high DPS blah blah you’ve heard it all before. Read more about it at here.

The deck’s main offensive win condition is the Hog, use it aggressively if they play a tank at the back.

Use your Rocket on troops that cost 4+ elixir offensively, defensively it can be used as a last resort defense on massive pushes and even to kill Elite Barbarians rushing the other lane

The rest of the troops are almost all used for defense, specially Mini P.E.K.K.A and Skeleton Army.

I just want to say one last thing, using a deck without buildings requires a decent amount of skill and good elixir management.

Overall it’s great for using at Arena 6 to Arena 9! I hope you like this deck, be sure to check out my video too!