Hows it going. Its Sphinks here for my first Deck Guide Ever!
For this deck, I will be sharing my Perfect LavaLoon deck. I have seen and used many LavaLoon decks, but this one trumps them all. It has great defensive potential and is devastating on offense. What makes this deck different from all the other LavaLoons is the fact that it has no defensive weakness. This deck has served me through many Meta’s and will work against any decks. Now let’s get into the Deck Breakdown: Cons:
Can be weak to Golem beatdown decks. (In this case, Push Minion Loon to prevent the Opponent from building up a push). Weak offensively to 3Musk decks (Miner on their Pump to prevent elixer advantage)

Lavahound: Too many lavaloon players try to use this as a win condition. That is not its Job. Never attack without a Balloon or an Inferno behind it. The purpose of this card is to absorb all the damage from the opponent and explode into pups, which can take out the minions, wizards and other defending troops, making way for the loon/Inferno Dragon to do their Job.

Balloon: Self-explanatory. Very High Damage, Keep it behind the Lavahound. Try to play this card whenever you get the chance, as the 5 elixer cost is always worth it with for the damage, or even just for the death damage, which can kill defending troops and do significant damage to the towers

Miner: This is the card that gives this deck an edge. You rarely see LavaLoon with Miner because those are 3 cards that offer little defense. But our other cards make it work. The miner can kill the pesky musketeers and wizards during your push, as well as a tank for the pups and balloon. Can be used for chip damage, but I recommend mostly using it within the push, as dealing with a miner, pups and balloon is almost impossible for your opponent

Inferno Dragon: Your primary Tank Killer. Very useful at defending big pushes. Can take out smaller troops such as executioners, bowlers, and Musketeers with ease. Very good counter push potential. You can pair a weakened inferno with a miner and a balloon for an instant counter push.

Skeleton Army: This card will never be out of Meta. Can be used as the tank killer in case your Inferno is out of Cycle or in case there is no area damage support behind it. Can deal some significant damage as it is often ignored on the counter push. This card offers great elixer trades and will give you the needed elixer advantage to pull off your push. If your opponent has Hog/EliteBarbs/Battle Ram/Lumberjack, save the skeleton army for those cards as it is the Inferno will be slow to kill them. This card can stop most rushes from your opponent and will always allow you to stay in control defensively

Cannon / Tombstone: Use your preferred one. I have used both and they both work well. Each one has their strengths and weaknesses, but the low cost can drag hogs, baloons or any other Building Targeting troop to them.

Arrows: Very wide radius can take out any spam troops that the opponent uses to counter your big push. Can offer great value. You migh see your opponent dropping a minion horde for your balloon and Hound combo, along with a skeleton army for your miner. This 8 elixer defense can be taken out with 3 elixer using this card. Keep it ready during your push Play the hound early and often. Its very slow, and will give you time to build up behind it. Counter push whenever you can. Keep the pressure up to not be forced into difficult defensive situations. The deck is very good defensively when it comes to small pushes, so make sure you never give your opponent the chance to build up a push by constantly building up pushes of your own. Miner any Pumps. Pushing against 3 musketeers can be hard, but Miner, Arrows and electro wizard can all be options to attempt and kill them. 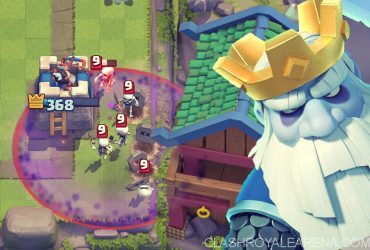 Hi guys my names MoePlaysFifa17, and yes that’s actually my name. This is my first guide on this website and I’m excited because I’ve always wanted to write a guide. … 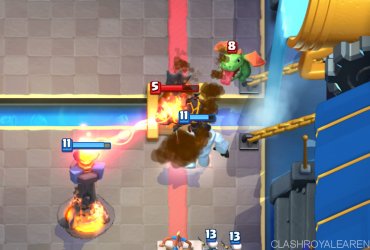 Hi my name is TechFusion and I am here today showing you can use an effective, fast, and cheap Lava Hound push deck that deals chip damage while your at it. …