This deck can be used for both ladder and challenge since most of the card is level-independent. The only dependent card that can cause you trouble is the P.E.K.K.A not being able to 1-shot their Barbarians which can easily be covered by the damage of the Executioner. 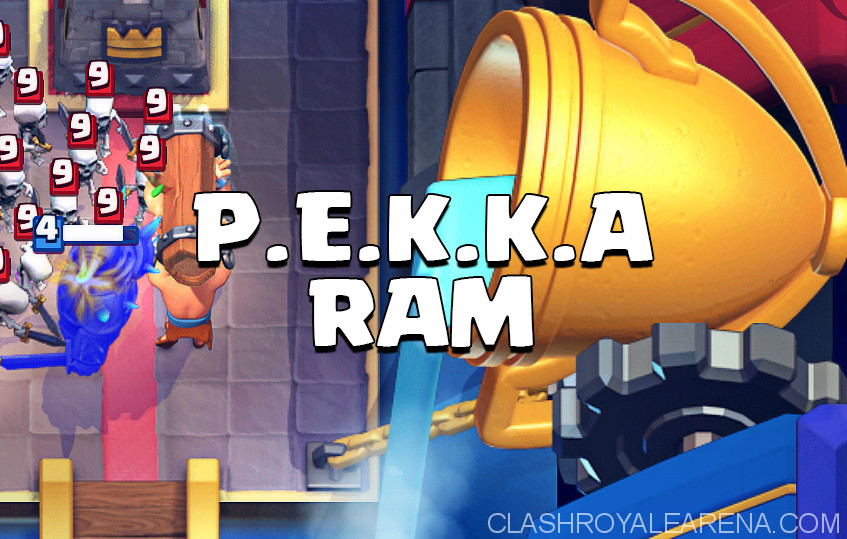 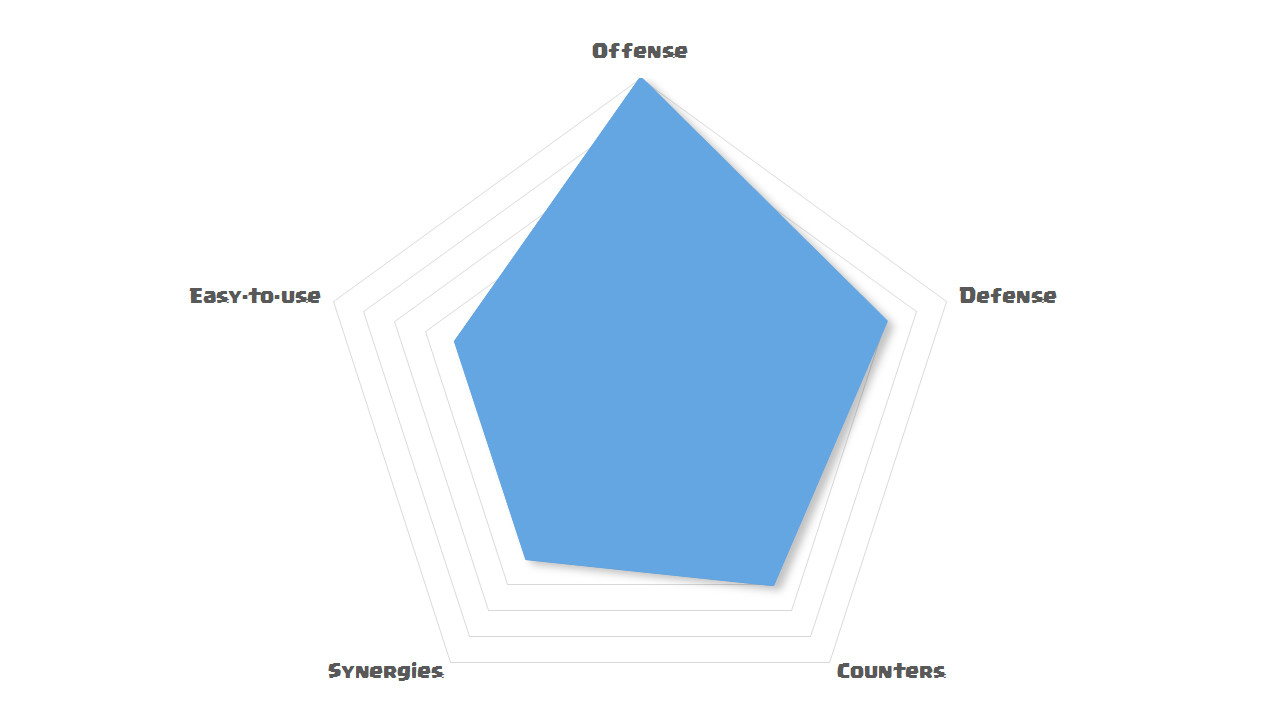 Your main tank and DPS of this deck. Since the deploy time is reduced, I prefer to use her reactively as the defender of the enemy pushes. In double Elixir, feel free to place the P.E.K.K.A the same way like you place other tanks. But placing the P.E.K.K.A reactively as a defender gives way more value than in the P.E.K.K.A in the back.

Since P.E.K.K.A is a troop that targets everything, you will need to have another winning condition that can be trusted which is the Battle Ram.

When Battle Ram challenge comes out, i lost badly and proceed to not to continue because i find this card isnt good enough. After a few play with this card, I found out that Battle Ram is actually very good. I usually save this card until the final real push comes out. Because once if the opponent know that you have a Ram, they will counter the next Ram easily.

You can also try to deploy a solo Ram when you know that you are ahead of Elixir. Battle Ram is the more high-risk high reward version of the Hog Rider. It is countered easily, but it packs more DPS than the Hog Rider.

I prefer to use this card in a beatdown way though. P.E.K.K.A first, Executioner and Minions, then the almighty Ram that will shred their towers off.

Yes, Rocket in a P.E.K.K.A beatdown deck. Use this card to quickly blast off their annoying support cards when pushing or to quickly destroy that Collector. Allowing you to have massive an absolute control against any deck that relies on the Elixir Collector.

Always save this card when they have Elixir Collector because this is how you win against a pumping beatdown deck. Do not allowing them to have the massive Elixir lead. The only rare occurrences to use this card is when they clump up all of their troops in one spot which will gives way more value than rocketing a solo Collector.

This card also counters the Inferno Tower. You generally place the Rocket the moment they place the Inferno. By using this technique, you will lose 1 Elixir but their main-tank killer will be killed which is a good trade for you. Also since you will collect a lot of Elixir advantage before the push, it is not such a big deal.

The main support of your 2 winning conditions. It counters all swarm which is the bane of P.E.K.K.A and Battle Ram. Unlike other support troops, it is also tanky enough for him to tank any spell of the game except the Rocket.

It also counters the Tombstone, One of the biggest counter to the Ram and P.E.K.K.A.

It is not a big deal against a solo Executioner. It is a very big deal if the Executioner is with Tornado ( ͡° ͜ʖ ͡°).

Paired with the Executioner or Rocket, this card will wreck every non-tank troops in the field. Not only that, it also synergizes with the Elixir Collector, allowing their Miner to be pulled to your king Tower which will gives you a permanent Cannon during the game.

This is your main cycling card and also the only stun card of this deck.

Ice Spirit is also the best friend of the Battle Ram if they use a troop to defend against the Ram, by stunning the troop for a while, the Ram can connect to their Tower. Allowing some good damage to their Tower.

The main uses of this card is to defend against a lone troop that will deal a considerate amount of damage if they left alone. Examples are Knight, Archer, Mega Minions, Minions and many others.

Ah… Minions. One of the Cards that is never buffed nor nerfed in Clash Royale.

The Minions will be your main DPS aside of P.E.K.K.A, it will also be your cheap defender in early minutes. It is also a good counter to a Balloon. Just watch out for splash cards and Arrows and you will be fine.

I do think that this deck is designed to fully destroy any beatdown decks.

Against a Lavaloon, Exenado is the absolute answer that will wrecked them. Against Balloon decks without Lava Hound, Minions and Ice Spirit is the counter. And if the Balloon is supported with some cheap supports/tanks, be ready to use the Rocket and aim it properly.

You have a Rocket ( ͡° ͜ʖ ͡°), try to always save the Rocket for their Mortar/X-Bow and be sure to not get outcycled and you are fine.

You can also use the Executioner and Minions which is a also a good counter for them. Executioners break all of their tiny swam defender and the Minions will spit the building to death. Ram is also a good way but it can be countered easily by a good siege players.

Not that hard of a matchup, generally you will always save the P.E.K.K.A for their tanks and Executioner for all of their support troops and problem solved.

Executioner can counter them for 1 positive Elixir trades, Ice Spirit and Minions is also a good counter but easily counterable by spells.

P.E.K.K.A is also a very good counter to them for 1 more Elixir. They will need to defend the P.E.K.K.A too tho, so the Elixir advantage is yours.

If you are a lazy boy, just Rocket them as it is not such a huge deal. XD (my way).

We doesn’t have any defensive building to deal with the Hog, so dealing with a Hog can be a normal/hard matchup according to the skill of your opponents.

Best way to deal with the Hog is having a P.E.K.K.A to counter that thing and use all of your support troops for a counterpush.

If they have the Inferno Tower, prepare to Rocket it because i prefer to spend 1 more Elixir than dealing with that thing.

If they run a Graveyard control deck like the famous Knightyard Ewiz deck, try to use the Executioner and Tornado that will clump up  their Knight and skeleton in one spot, Ice Spirits for their supports and Minions for their gravy. A bit complicated but it Exenado can deal with them pretty well without any other supports.

Against a tank Graveyard deck, you can use the P.E.K.K.A for their tanks and Minions/Executioner for the Graveyard. Exenado can also be used if the P.E.K.K.A is killed and they still have support troops alive.

The problem of this deck is that it lacks a cheap ground troop to deal with the Miner. Minions will just get killed by their spell and Executioner is just too heavy. I prefer to always use the Tornado for the Miner so that it can be trigger the king Tower.

At double Elixir time or at a decent Elixir lead, you can use the P.E.K.K.A to counter the Miner and then use all of your remaining supports for a counter push.

Rocketing their Inferno is also a good option. Furnace is also not that bad of a trade, And Exenado for all of their troops.

Tornado and Executioner will be crucial here, Ice Spirit will also be useful. Save the Tornado for their Goblin Barrel and defensive Executioner/ Ice Spirit for other swarms.

The main problem is that they will cycle the Goblin Barrel faster than you can cycle the Tornado. Try to sacrifice the Tower early and prepare for a big push if you aren’t getting any Elixir advantage.

Also don’t forget, Rocket their Inferno Tower :3, the rest is up to Exenado. If they have a Rocket, you will need to spam the Executioner and Elixir Collector, because the enemy will pick one and either way is a good trade for you.

The Pekkarocketioner deck is a fun to play off-meta beatdown deck that is very good at making Elixir trades and the push is different from any of classic tank + support beatdown deck. The full combination of this push which consists the P.E.K.K.A + Battle Ram + Rocket for the building + Executioner is almost unstoppable and fast to take the Tower.

It counters any beatdown deck easily but struggle against a control/cycle decks, but by managing the Elixir advantage, it can counters any sort of decks with ease.

So here it is guys, The heavy P.E.K.K.A beatdown deck by me, B.W. Any feedbacks and constructive criticism is very appreciated. Sorry for my not-so-good grammar because English isn’t my native language.