Get to Arena 8 with P.E.K.K.A and Prince! – Clash Royale Arena

Hello guys! I am brandoflaje and Recently hit Arena 8 on the day of the patch as a fresh level 8 F2P with an 8/6/2.5 deck with no Legendaries, Mortar, Hog/Freeze or Bomb Tower! Just to put it out there I have nothing against those that use or used them in the past, I just do not find them fun to play or to play against. F2P is also a pointless addition, I have no issues with those that pay for a game they enjoy, I just chose not to. In this scenario it’s significant as my cards are usually much lower than those that I’m fighting. Post patch was awesome as my deck was not nerfed, before the patch I peaked at about 2940. The primary reason for this post is to share my deck and to try to get my clan (TheBootyLooters) some exposure as we’re relatively small, but looking to grow!

Get to Arena 8 with P.E.K.K.A Prince Deck

Spear Goblins – Commonly used in conjunction with zap to clear Minion Hordes behind a push or to distract other troops. They’re extremely versatile and can be used to cycle through your deck in the beginning to try to get to one of my two preferred starting cards.

Barbarians – awesome defensive card with high value. I use them to kill single target troops and often try to surround back-lining Musketeers / Wizards with them. If used to clear something like a Giant or Golem I often pair them with the Prince to push them to the tower quickly. The most common counter to this push is often the Minion Horde, in which case my Spear Goblins / Zap come into play to clear that / enhance my push or if I can afford a Wizard I’ll use him as well.

Elixir Collector – My preferred start, I will not drop it first unless I have two of the following: Tombstone, Spear Goblins or Zap. Often played behind tower unless I’m constantly being pushed and want to use it as a distraction, less often now as it’s health has been nerfed. No explanation needed here, I use it to gain momentum, especially in double elixir.

P.E.K.K.A – The main tank / damage dealer of the team. I either start my game off with him at the far back to build a push / wait for a counter push. I use him coupled with the wizard to push to towers. I also use him on the defensive to tank a double prince or Valkyrie push. He’s one of the best options to clear a Giant/Royal Giant (which is becoming more common) which can then be turned into a very strong push. If used on the defense I will commonly pair him with a wizard to clear almost anything, then on the opposite side you can do a push with Prince / Spear Goblins and Zap if needed to pinch your opponent.

Tombstone – I usually place this in the middle to pull hog rider / delay and trade into a Prince or delay / distract a P.E.K.K.A Golem or Giant. I often swapped this card in and out between the cannon, I used it more frequently than the cannon and seeing as the cannon was recently nerfed, I have yet to swap it out yet.

Zap – The only direct damage I can use to clear troops / damage towers. It’s strong enough where if you’re running out of time you can often get a really low tower knocked out, but I primarily use it when the opponent pushes with a minion horde and zap alone with a tower can clear the wave, giving you a 3 elixir advantage. I also use it to clear Goblin Barrel, also giving you a positive elixir trade. You can also use it with an offensive push to prevent a distraction on a Prince charge or to get an extra hit on the tower. There have been countless games where I’ve won with the extra hit. I often want to trade it for Fireball or Arrows, but I feel as though it fits a good niche with this deck.

Wizard – Ridiculous wave clear for your P.E.K.K.A or Prince. It’s commonly countered by a higher level fireball, in which case it sucks, but if the fireball is the same level or lower you can usually get amazing use out of this guy. I use him to clear for my P.E.K.K.A, counter Barbarians or Minions/Minion Horde. In my opinion he’s my weakest/most easily countered card, but I find if you wait until after the P.E.K.K.A crosses the bridge it often catches your opponent by surprise and you’ll have a strong surprise factor the first time it’s dropped.

Prince – I usually use him to push on the other tower after I have a good push going with P.E.K.K.A/Wizard on the other side. If unattended a prince coupled with spear goblins will easily clear a tower. I pair him with spear goblins as they commonly counter with Minion Horde, then I just Zap and the Spear Goblins clear them out. The point of getting this to work is to work off positive elixir trades and momentum from your elixir collector. 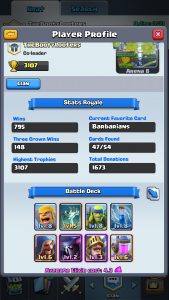 If anyone is interested feel free to try it out! Thanks for reading and please join our clan if you’re looking for one, we’d be open to merging! Feel free to ask any questions or to offer any constructive criticism or suggestions, I’m always looking to improve myself.

Want to build your own Clash Royale Deck? Please take a look at this in-depth Clash Royale deck building guide! 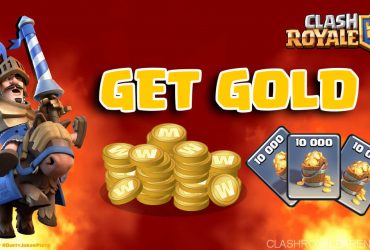 BEFORE READING THE GUIDE: *this guide is purely meant for F2Ps(free to play), or almost F2Ps(spent less than $30)* Know which cards you like the most! (archetype) Doing this will … 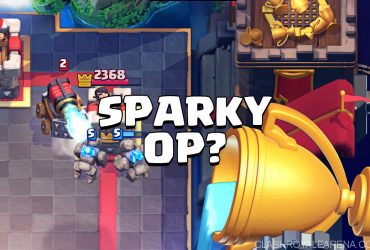