Hey guys it’s Heiny and this is my second guide for the new guy in town, the Magic Archer. 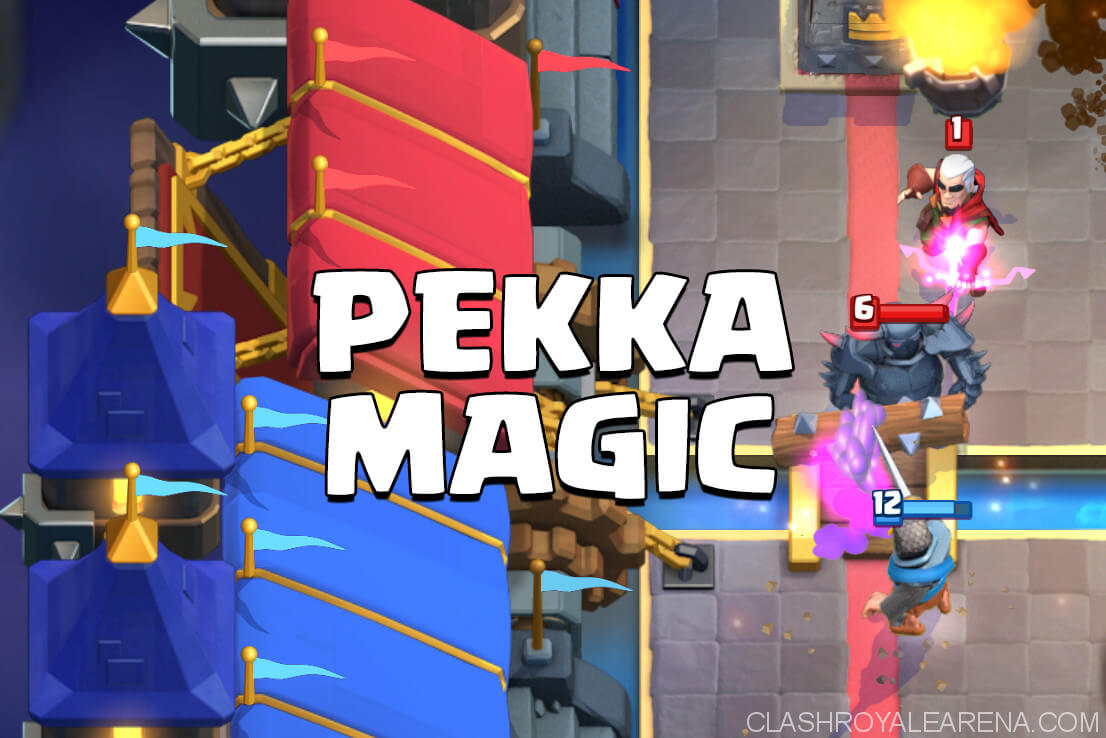 She is your defensive power.

She will kill other tanks, 2 shot Hogs, slice and dice Battle Rams as well as provide a huge counter push.

Because of her expensive Elixir cost, do not play her unless either she gives you a positive Elixir trade, it is Double Elixir, or you have a major Elixir advantage.

Miner: He is your win condition.

Play this guy to chip away at the opponents Tower or to support counter pushes.

Pair him with Tornado like an Executioner to clean up pushes and swarms.

Before using this deck, you should learn how to use the Magic Archer with all the correct placements.

Read more about him at here.

Use it in combination with the Miner for maximum efficiency.

It will group together troops so the Magic Archer can splash on all of them.

Log: The Log’s main use is for killing ground swarms.

Save it to kill Princesses, Goblin barrels, or Goblin Gangs.

The Log is always great card since it can knock back any ground troop.

Minions: Use the Minions for a cheap defense and a great combo with the Miner.

The Minions are your second air defense.

They will kill Balloons, Lava Hounds and Pups and almost all other air troops.

Goblin Gang: These are your ground defense.

They will shred through most tanks and soak up hits against a Prince or P.E.K.K.A.

Don’t become predictable and lose the game because your opponent predicted this card, mix it up (Also Guards may also work well, but I like Goblin Gang more with the Miner).

This is a control deck.

Utilize all of your cards for maximum damage.

During single Elixir, you should slowly chip on your opponent’s Tower while minimize incoming damage.

You should be very careful with playing your P.E.K.K.A since she costs a ton of Elixir.

Use the Miner to chip a couple hundred damage off your opponent’s Tower.

You want to try to activate the King’s Tower in the first minute in order to deal with Hog Riders, Goblin Barrels, Miners and more.

During the very first 30 seconds, send a Miner and maybe some Minions to figure out your opponents counters. See if they have a card to melt your P.E.K.K.A.

Also figure out what their spells are and what archetypes they are playing.

During Double Elixir is when you go all out.

If your opponent doesn’t play anything, you should start a P.E.K.K.A in the back.

Don’t allow them spell value when stacking a push.

You should then put a Magic Archer in the very back corner once the P.E.K.K.A passes the arena Tower.

Once the P.E.K.K.A walks onto the bridge put Minions in the left most corner and make sure the arena Tower targets the P.E.K.K.A.

Play your Miner onto any glass cannons or splash attackers they defend with (Executioner, Musketeer, Princess, Dart Goblin, Etc.)

Even if your P.E.K.K.A doesn’t get to the Tower, your Miner and Minions should survive and do a lot of damage if not you have 2 options.

You can defend your opponents push with a P.E.K.K.A Magic Archer combo then counter push.

Or you can start another slow push.

I prefer to use the P.E.K.K.A to soak up the damage from the supporting troops while using Magic Archer + Tornado to kill everything. Then add Miner + Minions + Poison.

Keep doing this until you get their Tower but never over commit. You want to always defend your Tower first.

Most of your pushes will look like one of these two with your spells to support.

If your opponent overcommits you should punish him.

If they play a Golem in the back you should use Miner and Minions on the opposite lane.

Since this is a deck that has both Goblin Gang and Minions, try to bait their Zap.

If they Zap during Double Elixir and it is out of cycle go with either Miner and Minions or Miner and Goblin Gang.

The strengths of this deck is it’s defensive potential.

With the P.E.K.K.A, Magic Archer and Tornado, you should be able to clean up most pushes and create a deadly counter push.

This deck also has the Miner which has been a very strong card in the meta recently.

Also with the meta having a lot of Giants, and Golems, P.E.K.K.A will easily counter those tanks with the Magic Archer shooting right through all the troops.

The weakness of this deck is the lack of air defense.

There have been lots of Lava Hounds recently and Magic Archer dies to all heavy spells while the Minions will die to Arrows or overleveled Zaps (In ladder).

Against a deck with lots of air troops you should spread apart your Minions and Magic Archer so they don’t get spell value.

Also use Tornado to clump up troops for the Magic Archer to kill.

Don’t be afraid to Poison on defense against a Lava Hound player.

Once they play a Lava Hound you should go P.E.K.K.A same lane. Then support the P.E.K.K.A and try to take there Tower since you will most likely lose a lot of HP on yours.

Either play right lane rush and 3 crown them as quick as possible or go for the 2 crowns and defend the second Tower with your life.

Don’t try to draw with this deck against Lava Hounds. You should just try to punish them for playing a Lava Hound and don’t let them build up a push.

This deck is also a bit weaker against bait decks.

With the recent nerf to the Knight hopefully you don’t see as much bait.

Use your Log against the Barrel and Poison their Princess.

Also use the Magic Archer and Tornado to clean up swarms.

Before jumping immediately into ladder with this deck, do a couple of challenges with it.

Preferably Classic Challenges because you can do many of them.

Once you understand it use it for ladder.

Also try predictions if your opponent is always playing cards in the same place. You can keep your P.E.K.K.A alive and when a battle just by predicting a Skeleton Army with your Log.

Try to defend smartly and not over defend.

Also play with this deck. Get a feel for it and don’t be afraid to change some cards or change your play style.

This deck does best when you use it the way you like best.