Hi again CRA, this is Victorapple here with another off-meta deck, this time featuring P.E.K.K.A! Also, as the Poison and P.E.K.K.A are getting huge buffs, Lightning is a must in order to deal with Giant beatdown decks. 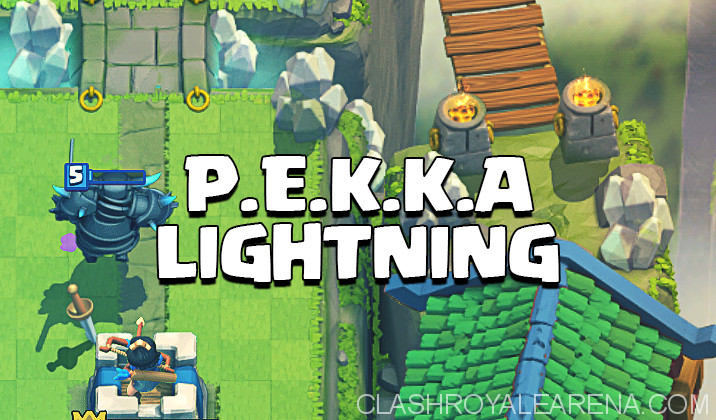 P.E.K.K.A is a powerful tank, having almost the same HP as a Giant at tournament levels, but deals way more damage per hit and also doesn’t target buildings. These days P.E.K.K.A does not see much usage in the Arenas, due to how easy P.E.K.K.A can be countered.

However, she is a lot more threatening now since her load time is only 1 second now.

Here is an interesting deck I put together to help eliminate P.E.K.K.A’s weaknesses and help counter the current meta very well. With the addition of Executioner, Spell-bait decks have taken a toll, only to be replaced with the popular Giant-Executioner beatdown decks. This deck does well against both when your cards are played correctly and with precision.

P.E.K.K.A: The main tank of this deck. She probably has the lowest use rate of all the other tanks, with the possibility of Giant Skeleton being lower. For a costly 7 Elixir, she can be easily countered with as little as 3 Elixir. Therefore, it is important to support your P.E.K.K.A well to be able to clear down threats. P.E.K.K.A’s strength comes from her big HP pool and her powerful attacks. She makes for a great tank killer too, taking down Giants and Golems while soaking up damage from support troops. However, she is really easy to take down. Ice Golems can kite her, Skeleton Armies can surround her, Inferno Dragons and Towers can destroy her, and Ice and Electro Wizards can just hinder her. That’s where all your supporting cards come into play!

Wizard/Executioner: I used Wizard in this deck, mostly because I don’t have Executioner. Wizard is also helpful for lower Arena’s who may not have unlocked Jungle Arena yet. They both have their pros and cons, but generally Executioner is better, even though Supercell was trying their best to increase Wizards use rate. For a quick overview, Wizard has a slight better range, more DPS, and deals damage in an Area. Executioner has more HP, surviving Lightning, and deals damage in a row. Executioner does have a better niche in the meta by taking out Goblin Barrels and Minion Hordes better and easier than the Wizard, but being an Epic card its harder to level. Feel free to use either.

Both can take out swarm troops in the air as well as the ground, clearing up both distractions like Barbarians and Skeleton Armys, or high DPS units like Minion Horde. On defense, when stopping a big push, a quick Tornado lumps everyone together, making easy for the Wizard/Executioner to hit the tank and supporting units at the same time.

Tornado: Another uncommonly used card, but its a great addition to this deck. As mentioned before, it helps clump enemies together, making easy targets for the Wizard. Not only does this work on defense, its also great for offense. Tornado can also be used for pulling Ice Golems back to prevent them from kiting, pulling dangerous units like Ice Wizard and Electro Wizard right up into P.E.K.K.A’s face, and even clears Skeleton Army when timed right. Not only that, you can use Tornado to force Miners or Hog Riders to trigger your Crown Tower. This helps against Spell-bait decks, as the activated King Tower can greatly help in killing Goblin Barrels quicker without needing spells.

Lightning: This spell is great on offense for supporting your P.E.K.K.A. It’s perfect for dealing heavy damage to enemy towers while taking out support troops trying to stop your P.E.K.K.A, such as Ice Wizard. It will also severely wound Inferno Towers, Bowlers, and Executioners, and also getting the reset on Inferno Tower and Dragon. It will take up some time to build up elixir to use Lightning, so this is usually used in your full push when it’s double elixir or when you’re confident Lightning will take out the only counter your opponent has for P.E.K.K.A. Also great for finishing off <350 HP Towers.

Defensively, you can place it so it kills all the supporting troops, but I generally don’t do this because Lightning is better for offense. with your P.E.K.K.A pushes.

Log: I generally save explaining Legendary cards for last, but because I lumped all the spells together I will explain it now. Although, there really is no explaining. This card helps you get rid of Skeleton Army, which will stop your P.E.K.K.A, and Princesses, which can constantly damage your backline. Its knockback effect is also helpful for defense, giving precious more seconds to keep that Elite Barbarian away from your tower and re-target onto Tombstone. Take Zap if you don’t have, but Log is preferred.

Tombstone: Your defensive building of this deck. Great for countering Elite Barbarians and Hog Riders, as well as pulling Lava Hounds and Golems and other tanks. Pretty solid for a defensive building, and the constant Skeletons make it great for distractions, as well as being able to prevent Chip damage from a Furnace. Replaceable with Tesla if you are having trouble with Lavahound, but then you won’t have any distracting ground troops.

Read more about the Tombstone at here!

Minions: Minions serve the role as a secondary distraction, such as against Musketeer, or another cheap quick DPS unit. Minions are your go to counter for Graveyard, and Lavahound and other flying troops besides Baby Dragon. Not only that, they can distract Inferno Tower, similar to how Minions and Royal Giant are used. There is no need to replace these guys with Mega Minion, because Mega Minion is also used in this deck!

Mega Minion: Its damage nerf simply relocates its usage back to its intended purpose: A powerful air-defense unit. Your go-to counter for Lavahound, Baby Dragon, and Executioner, in addition to other troops Minions can be used against like Balloon. Mega Minion is great for cutting off support troops, and helps support P.E.K.K.A by taking out more beefy distractions like Ice Golem.

Pre-Double Elixir: You won’t be able to fully commit a support to a P.E.K.K.A for the most part during this phase of the match.

Placing it in the back when at Max-Elixir is still a safe option though. However, its better to wait until your opponent plays down something first, then place the P.E.K.K.A in the same lane.

If it was a ground tank like Golem or Giant, it becomes a lane battle of who can support the tank better, but you’ll win because Giant can’t attack P.E.K.K.A, but P.E.K.K.A can.

Support your P.E.K.K.A by using Wizard + Tornado to deal with supporting troops while damaging the tank, or just cut them off with Mega Minion or Minions.

With Hog Rider, you can Tornado him to activate your King Tower, or just Tombstone for a distraction.

If nothing is up, Mega Minion, Minions, or even P.E.K.K.A can be fine.

Play smart, and counterpush when possible or start building up a big P.E.K.K.A push.

Now you can support your P.E.K.K.A with everything you got.

In addition to the Wizard, you can include both Lightning and Tornado to help assist getting P.E.K.K.A to the Tower.

In addition with Mega Minion and Minions, you also have air coverage.

Even if P.E.K.K.A does get kited away, your supporting troops can deal heavy damage if left alone.

Good luck with the deck!