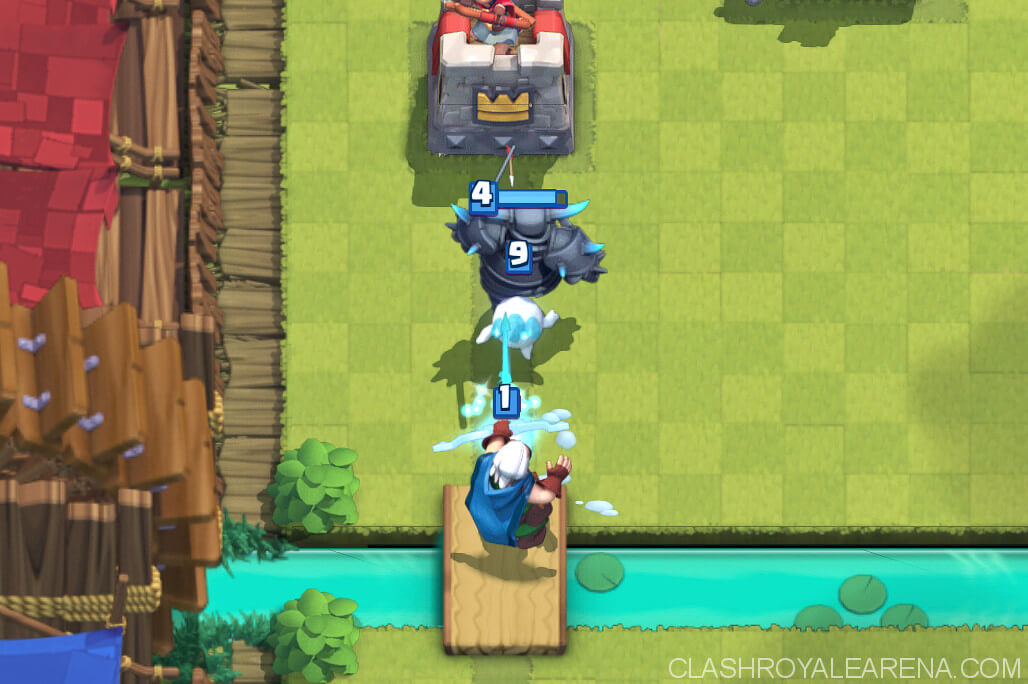 She is your counter to the tanks or win conditions to your opponent’s deck.

She is a very big investment so be careful when using her.

She should only be placed on the map in Double Elixir unless your opponent forces her out of your hand (incoming MK, Golem, Giant, etc.).

Dark Prince: He is so much stronger now.

DP is making his way back into the meta since he is such a strong card now.

He is the new Battle Ram.

Executioner and Princess had a kid and BOOM, Magic Archer came into existence.

He will slowly help chip damage off the Tower, in a game I had he actually came in clutch.

Electro Wizard: I’ve been seeing plenty of sparkies and Inferno dragons, he will help with those.

The Electro Wizard can save your P.E.K.K.A from being melted against a Inferno Dragon/Tower.

Cycle card, you can put Bats or some other defense if you don’t care about a faster cycle.

It clumps all your opponent’s troops so your Dark Prince and Magic Archer can clean them up.

You can also use it to activate the king Tower. I’ve been seeing to many Hog decks so you really need Tornado to help hard counter them.

Poison is mainly in this deck for pumps. Use it to kill pumps and get value killing glass cannons or swarm units.

It will also help on defense against Lava Hounds.

To start off the game you should start a card in the back.

Preferably Dark Prince in the back or Electro Wizard.

This period of time is just learning their deck and keeping their win conditions and hard counters in hand.

If you know the current meta you should have a good guess as to what deck they’re playing by the first 3-4 cards.

For example if someone plays Mega Minion, Night Witch, then Baby Dragon, I immediately know that this is almost for sure a Golem deck.

Another one is if they play a Goblin Gang, then a Pump, then a Miner/Minion Horde, I think it is 3 Musketeers and I change the way I play.

You play different against 3 Musks vs against Golem.

Cycling chip damage at the beginning is never a bad move.

Use Ice-Spirits, E-Wiz, Dark Prince, and Zap. P.E.K.K.A and Magic Archer as well as Tornado and Poison should only played reactively, E-Wiz is not so much but I like to save him so I don’t get punished with Inferno Dragon or Sparky other lane.

Their Tower should be down to 2000-1500 by now. You should be playing reactively.

Then after you defend, go for a huge counter push.

Try to play smartly and switch it up.

Do something that your opponent would never suspect, like a P.E.K.K.A on the bridge other lane.

Doing something bold will almost always pay off in the end unless you do it to much.

Also during Double Elixir is the time to do predictive plays and lots of them.

Or if you know your opponent will Golem in the back, pressure other lane when you think they are at 10 Elixir and will drop the Golem.

This deck chips very slowly so it is better in challenges since overtime is a juicy 3 minutes.

You should be playing a lot of Dark Princes at the bridge pressuring their opposite lane.

I would generally play P.E.K.K.A in the back same lane as their push.

Once they overcommit on their push to kill the P.E.K.K.A, I drop another other lane, then I just rush them as fast as I can.

I only do this against beatdown decks and if I think I won’t be able to beat their next push.

A lot of people don’t expect a P.E.K.K.A at the bridge and they won’t have enough to defend it.

Once your Tower is super low stall by Tornadoing everything back.

Golem: Try to get as much damage as you can before Double Elixir.

As soon as they drop their Golem you should punish them with a Dark Prince and Ice Spirit opposite lane.

Either that or you can apply constant pressure with a Dark Prince in the back.

You should drop Magic Archer behind your arena Tower in the center tile to line up with everything and hit the Golem and supporting troops.

Keep repeating until you win

Giant: Save your P.E.K.K.A for the Giant and Magic Archer + Dark Prince if they split lane push.

If they split lane push you can pull everything to the center on your side with the Tornado.

Let their P.E.K.K.A come to your side so you can defend then counter push.

Magic Archer and Tornado their supporting troops or Poison them, just make sure their push doesn’t get to your Tower, then go in for a heavy counter push.

ou can also use the Dark Prince’s shield to soak up hits against the P.E.K.K.A while your P.E.K.K.A kills theirs.

Miner: Tornado the Miner to the king to start.

Then, Dark Prince on the Miner and P.E.K.K.A support troops

If they drop Inferno go opposite lane with Dark Prince. Try to let as little chip damage as possible.

Bait: Tornado Barrel to king. Then Poison their princesses and Zap Goblin barrels.

If they spam a lot use Magic Archer and Tornado.

Use P.E.K.K.A on the more supported side (most of the time the 1 musk) and Magic Archer, Dark Prince and Tornado the 2 musks.

If you know they will drop 3 musks get ready to Tornado them to one side or all together so a charging Dark Prince can do work on them.

This deck could use more offense but is mainly built on a good defense then overwhelm them on the counterpushes.

You should  also punish your opponents mistakes even if it puts you down a lot of Elixir.