Hello guys (and gals)! I am GhastlyDestroyr from the clan A Kings Ransom and this is my first time submitting a deck.

I have been having great success with this deck and am a level 9 in Legendary Arena! 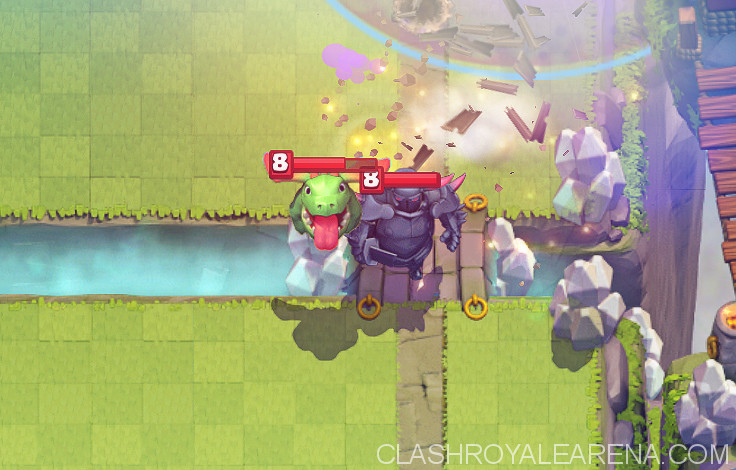 As you probably know, there has been a recent balance change on Feb 13th and many cards were nerfed and buffed. Three of those cards were P.E.K.K.A, which had its deployment time reduced from 3 seconds to 1 second (at least I consider this a buff) which is an insane reduction. The other card is the Baby Dragon which had its range increased from 3 to 3.5 tiles. The third card is one Elixir Skeletons as they have been changed back from 3 Skeletons to 4 Skeletons which is amazing.

The reason I consider the P.E.K.K.A change a buff is that even though it is harder to build big pushes, the P.E.K.K.A becomes a much better counter to a lot of cards including the Hog.

The P.E.K.K.A now becomes slightly less of a beatdown deck but it becomes much better as a reactive play which especially helps in counter pushes.

I used to consider Baby Dragon to be one of the worst cards and thought of it as a worse Wizard or Executioner, however, paired with a P.E.K.K.A, it can support your push while damaging your opponents tower very well. This range buff lets it help counter a lot of the the small troops that normally are used to counter the P.E.K.K.A.

P.E.K.K.A The P.E.K.K.A is the main win condition however, I will explain how even if you fail to get the P.E.K.K.A to get a hit on the tower, you can still easily win.

The P.E.K.K.A is an amazing tank killer. It will slaughter a tank or minitank with it’s high attack damage.

Against the Hog, the Hog will not get more than one hit but if you place the P.E.K.K.A very quickly and about 3 tiles before the crown tower, you can sometimes negate any damage from the Hog.

When facing an X-Bow or Mortar, you can place the P.E.K.K.A whenever they place down their siege tower to protect your crown tower while also defeating the siege card. However, even if you don’t have the P.E.K.K.A in hand, you can still use Lightning to damage the siege tower and troops nearby.

In addition, the P.E.K.K.A is a counter to many popular cards in the current meta such as Golem, Giant, Executioner, Elite Barbarians, and RG (Royal Giant). The P.E.K.K.A can also tank well against Fire Spirits, especially the ones that come from Furnaces.

Another aspect is that the P.E.K.K.A can help with a tank and spank.

Sadly, there are not really any other card you can replace the P.E.K.K.A with as it is a unique card from its ability to deal massive damage to enemy troops while still being very tanky.

In addition to that, the Baby Dragon also is very good at killing the small troops that most opponents use to counter the P.E.K.K.A with. This includes Skeleton Army which is very common in the current meta, Spear Goblins, and Skeletons, and will also two shot Archers, both Minions and Minion Horde, and Goblins.

In addition, if you know your opponent relies heavily on Inferno Tower to defend against your P.E.K.K.A, you can place your Baby Drag on the middle to temporarily distract the Inferno Tower.

Princess – The only legendary in this deck is the Princess.

This Princess was one of the two first legendaries to come out and it is very unique in its superb range and excellent splash, paired with the Baby Dragon, almost all small troops will die very quickly.

The Princess is also very good at chipping and locking onto your opponent’s tower and can deal a lot of damage if your opponent is focused too much on your P.E.K.K.A.

It deals very similar damage to the Baby Dragon.

A good replacement for the Princess is Minions. I have tried out this deck with Minions instead of Princess and it still works out very well. The difference is that there is slightly less splash in the deck but the Minions give a counter to Graveyard other than Archers and can help distract the Inferno Tower from the P.E.K.K.A. Minions also help against Lavahound decks which this deck is a little weak too.

Zap – I personally do not have Log and so i still run Zap even though it no longer kills Goblin Barrel but that is made up for with the Fire Spirits.

One benefit that Zap has over Log is that it can reset the Inferno Tower which can be very dangerous for a P.E.K.K.A.

The Zap is also very good at instantly killing a Skeleton Army for your P.E.K.K.A if you either to have a Baby Dragon or Princess on the field or if they are distracted by something else.

Paired with the Zap, the P.E.K.K.A can deny any damage from a Hog Rider although I only recommend this if you can afford any more damage on your tower.

A possible replacement is The Log. I don’t have The Log so I do not know if it will work out very well. If you run the Log instead, you may be more susceptible to an Inferno Tower but it could be possible to run Minions instead of Princess to make up for this. However, a benefit that the Log has is its amazing knockback which can be very helpful on defense, and the Log can also completely counter Goblin Barrel unlike the Zap. The Log also deals more damage and kills the Princess while also being able to chip the opponent’s tower more.

Lightning I originally ran Fireball instead since the weakness of a P.E.K.K.A is small troops, however, it is overkill with Zap, Fire Spirits, Princess, and Baby Dragon.

Additionally, I had some problems with a burner deck since its Inferno Tower kept on killing my P.E.K.K.A. That is why I ran Lightning instead.

Although Lightning does cost 2 more Elixir, it synergizes better than the Fireball in this deck.

First of all, the Lightning counters the Inferno Tower, which is one of a P.E.K.K.A’s weaknesses, while also being able to damage your opponents tower and killing anything else too. Also the Lightning can counter decks that rely heavily on the Elixir collector or Furnace. In addition to taking out buildings, Lightning can also take out any units that dies or take severe damage from it while also clipping the tower to get value sometimes, or just get some easy damage without giving you much of an Elixir disadvantage. Also, this deck can be weak to Lavaloon (Lavahound Balloon) and in that case, you want to arrange your troops to attack the Balloon first as it is the biggest danger and if you need any more damage, you can also Lightning the Balloon and the Lavahound and hopefully clip something else too.

I severely recommend you don’t replace Lightning as it helps against Inferno Towers as well as any other defending troops. Although Rocket could be possible, it isn’t good of an Inferno counter and it has a much smaller radius of only 2 tiles compared to a Lightning’s 3.5 tile radius.

Skeletons were changed back to their original 4 Skeletons from 3 Skeletons.

The Skeletons offer amazing value for one Elixir!

First of all, they allow you to easily cycle through your deck. This allows you to cycle back to any card you may depend on to counter one of your opponent’s cards.

Another great utility of the Skeletons is the ability to take out any alone support unit that doesn’t deal 360 splash by surrounding the troops which is done by placing Skeletons directly on the troop (Wizard, Sparky etc).

Skeletons can also counter Miner and if you are very low on Elixir, you can depend on Skeletons to defend a Hog and only take two hits from the Hog.

Skeletons can also protect any one of your troops from a card that make deal high single target damage for example I sometimes protect my P.E.K.K.A from a charging Prince by placing down Skeletons in front of the P.E.K.K.A to take a few hits. This works for many other single target cards such as mega Minion or Elite Barbs.

If you find it hard to use Skeletons as they can require a lot of skill to be used well, then you can run Skeleton Army. I originally ran Skeleton Army as an additional high damaged dealing card with the P.E.K.K.A but the deck is so cheap and easy to cycle through that I didn’t really need it so I ran Skeletons since they were buffed and they helped cycle through the deck very well.

Archers are one of my favorite cards. This is because they are so versatile.

In the beginning of the game, I often times split my Archers. This is so I can defend a side if my opponent does an aggressive push and also, if my opponent ignores an Archer, I can get some chip off.

Another advantage Archers have is that they won’t die from many common spells such as Zap, Log, or arrows (these are only at tournament standards for example, a level one Log will kill any Archers below level 9).

Archers are also a great counter Graveyard, however, of the tower is distracted on something other than the Skeletons from the Graveyard, you will need a little bit more help (any additional help works).

They also help against air troops too.

Overall, Archers are just a good versatile card that can help in almost any situation.

If you really want to, you can replace Archers with Minions however, they are more susceptible to being taken down as they have less health although they do offer greater DPS. Another possible replacement is Mega Minion as it is a cheap minitank that offers great damage and can help deal with a Balloon against a Lavaloon combo.

Fire Spirits have mostly gone out of the meta as people usually run Furnace instead. However, this deck doesn’t need a building and Fire Spirits offer greater immediate help and damage while also being cheaper.

One example is that 3 Fire Spirits will take out an entire Skeleton Army for you while 2 will still leave a few Skeletons remaining.

The Fire Spirits also can instantly kill many small troops. For example, 2 will instantly take out Minions while three will take out Minion Horde instantly. This way, you protect the P.E.K.K.A from even more damage and you also don’t have to wait for the Baby Dragon or Princess to attack twice.

Fire Spirits also offer great immediate damage in case of an emergency and they can take out lone troops similarly to the Skeletons.

I’m not sure about any replacements as the ability for them to instantly deal a lot of damage and take out things is a great help. A possible alternative is Furnace but you really don’t need it as it is more expensive and this deck also doesn’t really need a building as the P.E.K.K.A is the tank killer. I strongly believe that the Fire Spirits shouldn’t be taken out but if you want to you can replace it with some other troops that deals similar splash.