Heya guys Lolman here coming to you with a variant of a pretty popular deck that I find works super well with the meta right now! 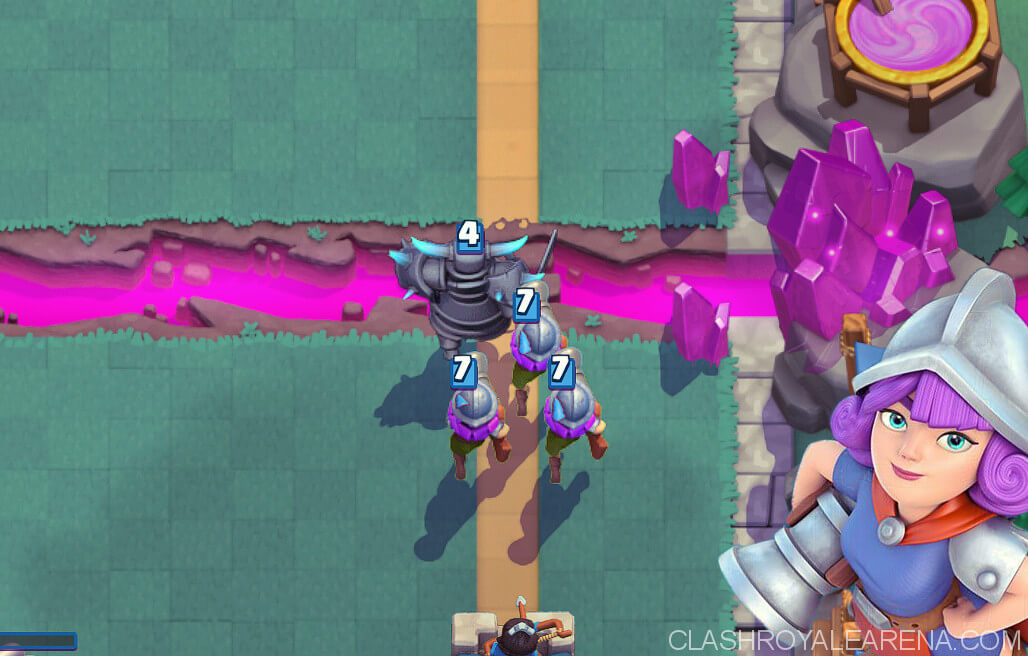 Taking a look at the meta, it can be summarized to 3 Musketeers, Hog Cycle, Giant/ Golem beatdown, P.E.K.K.A control and Bridge spam.

This deck in a nutshell falls into that category as a 3 Musketeers deck.

However….. What counters 3 Musketeers? Golem Tornado decks do a very good job at clumping up the 3M onto the Golem so Baby Dragon etc shred them.

Bridge spam can work wonders against 3M as well if it’s used by a good player and they got Zap or Arrows that’s basically GG.

So taking all that into account, I made a one card sub that helped me secure a LOT of wins against said hard counters by introducing a counter to most their win conditions. As the title implies, yes P.E.K.K.A 3M is back.

**This is pretty much the basic 3M beatdown deck albeit with P.E.K.K.A not Battle Ram. P.E.K.K.A not Ram does = slower cycle but not by a whole lot relative to the previous avg Elixir cost as P.E.K.K.A is only 3 more than the Battle Ram**

Without further ado onto the deck-

This is an expensive deck and like all expensive decks, you need to take care that you actually Pump up and make positive Elixir trades.

I would Pump up early on 9/10 times unless I have a bad starting hand.

Ie- Ice Golem, P.E.K.K.A, 3M, Pump and next card is Zap. This is very bad as a starting hand and pumping up, if punished with say Bandit + Dark Prince+ Zap or Poison that can lead to well… Losing a Tower.

Will elaborate more on starting plays once we get to gameplay.

3M should be used on defense early on, or as punish pushes.

If you defend a push for an extremely positive trade and your opponent overcommits to destroy the Pump. Ie- Bandit+ Ram+ Dark Prince. You defend with Horde, then they Poison Collector.

Then I’d do something like P.E.K.K.A at the back and 3M in middle when P.E.K.K.A reaches the bridge and that’s pretty much GG, Oops, Thanks, *Crying face*

Minion Horde – Bait out a spell like Fireball or Poison and you’re gold to defend with this card.

Offensively should be used on few occasions. Ie- I love using skill Horde vs the P.E.K.K.A Fireball/ Poison bait deck.

Badly placed Goblin Hut that won’t draw the Horde should be punished with Minion Horde Miner other lane.

With Zap, they will struggle to defend the push and with Log in the deck they will suffer. (This is assuming you drew out a Poison onto your Collector as they will almost always Poison the first Collector).

Can be replaced with Guards for better defense vs pushes like double Prince but I find the Gang more well rounded hitting air and all plus more of an offensive threat and greater DPS!

Adding to the spell bait element, typically though this is one of the decks cycle cards early on.

Should always be in hand in my opinion.

Gang or Horde that is, if you wanted to Pump up.

Defensive card at least early on, but late game I would place her in the back building up a push. (Unless I am facing Golem or Giant in which case I’d wait for them to make a move.)

Great damage, destroys Golems, Giants and even other P.E.K.K.A!

Use her wisely though as she is 7 Elixir and note sometimes it’s best to let her get taken down on your opponents side than overcommiting.

If you have a P.E.K.K.A walking down the lane after defending a Hog, they Exe and your hand was Ice Golem, Zap, Goblin Gang and Minion Horde. Best not give them Tornado value

This is mainly for taking out enemy pumps and one of your 2 tanks for the 3 Musketeers.

If you find your opponent focusing on the 2M side, you can Ice Golem in front of 2M then Miner Tower in side of 1M.

Great at punishing pumps as well and finishing off towers. This is sort of your Tower finishing *spell*

Great synergy with Zap, good at kiting opponents cards as well to other lane and tanking hits+ slowing down troops temporarily.

Works quite well as a 2 Elixir cycle card, that being said you need to know if you need to hold onto this card vs certain decks.

Pump up! This deck is really expensive so till 2x Elixir, pumping up and defending is the best means of action.

Provided you have a decent starting hand!

What I mean by this is you should have Ice Golem, Zap and Goblin Gang/Horde in the starting hand/next card in line.

It’s okay if you have one card missing but you need either Gang or Horde as either your next card in line or already in the starting hand.

This is because those are your cheap defensive cards you will use in the case of them rushing. 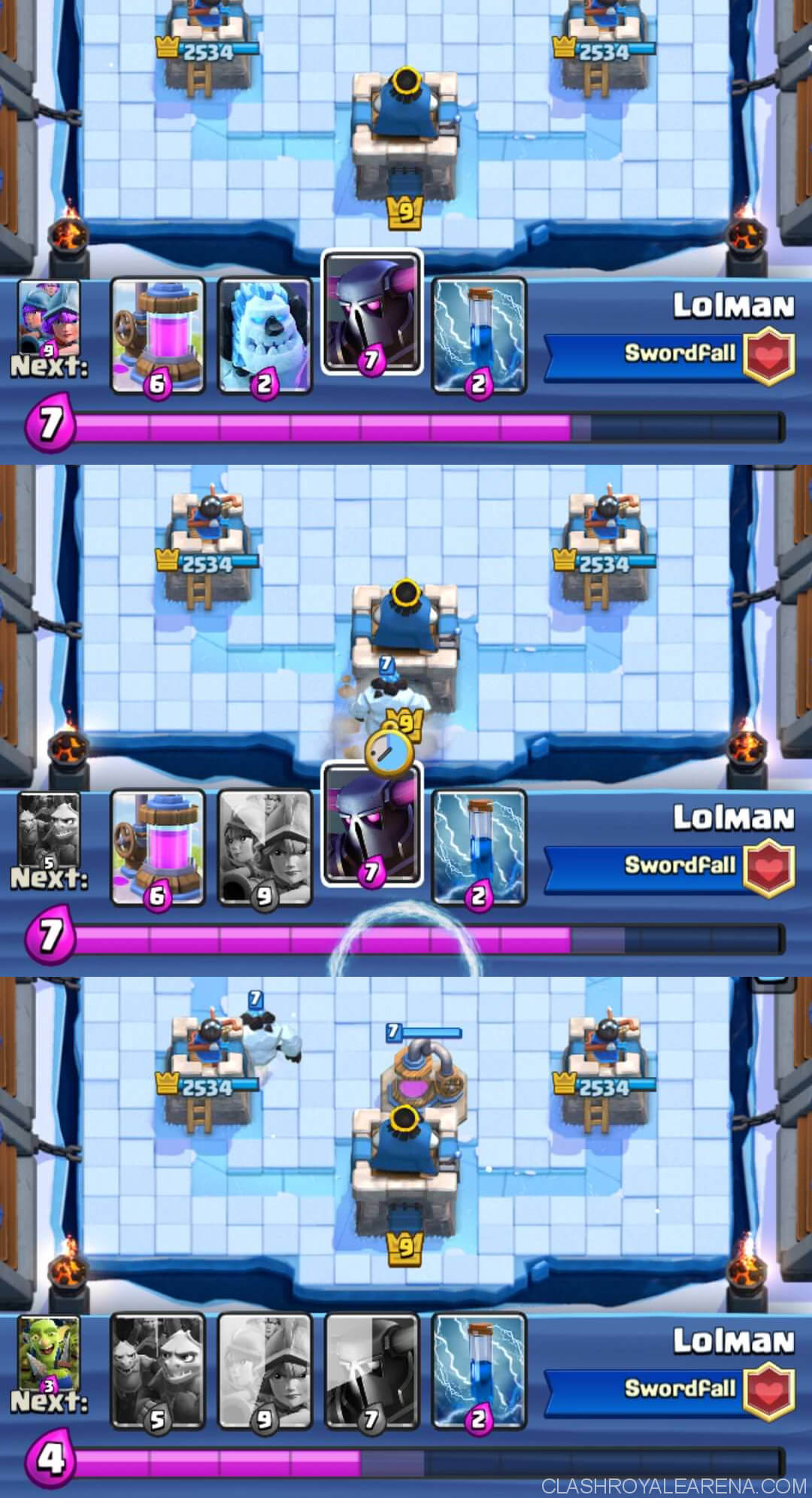 Here I had a really bad hand. Ice Golem alone would have done nothing vs a rush if my opponent decided to do so. Cycled Ice Golem then saw Horde next so was comfortable pumping up.
If no Pump cycling cards is the say to go. Ice Golem in the back, maybe a Goblin Gang split, safe spot Miner (Not that huge of a deal as you have a Pump to counter theirs).

So for the first minute of the game, figure out opponents deck, pump up and defend.

Identify if you will be getting a pretty early 1-0 win or if it will be a long game where you will be pretty much playing a Pump game. For example, vs another 3M deck or like X-Bow, where it’ll be hard to defeat unless you’ve got a Pump city going on.

Around now, knowing opponents deck, you need to get your cycle working the right way for you.

For example, Have Ice Golem when they have Dark Prince, P.E.K.K.A for Golem and Miner for Pump.

Can be done by cycling at right times ie- Ice Golem in the back etc, as long as they’re not essential cards.

Say your opponent just used a Dark Prince and you defended with your Miner? Then you’d want to make sure you keep Ice Golem for next time he has Dark Prince unless the person rushes with say a Miner Minion Horde where you can Ice Golem+ Zap for a +4 trade. Etc.

Pump up! Pumping up mid-game is way less riskier because you’d want to have built up an advantage.

Occasionally I don’t even wait till 10 Elixir before I drop the next Pump at times.

In short, Pump up! Save cards that need to be saved in order to make your cycle work for your advantage!

Around now, you will be playing your 3M more aggressively.

I would avoid cycling in the back. Depending on what you face the order oyu drop cards will be different.

Beatdown will be dropping tanks so P.E.K.K.A that lane then save for 3M, punish Horde works perfectly albeit Miner + Horde is much easier defended in 2x Elixir.

While not playing losing moves like P.E.K.K.A in the bridge followed by a Horde vs a deck with Fireball Goblin Gang or Ice Golem Zap + something to kill P.E.K.K.A, you will want to play this offensively.

You have Ice Golem, Miner as tanks for an example if you wanted to save the P.E.K.K.A!

So in a nutshell, amp up your game, play aggressive but not careless by wasting counters to their cards that could cost you the game!

Golem double Prince Tornado or a Poison/ Lightning variant. Both get destroyed by this deck.

You typically want to punish their pumps with your Miner and build-up your own Elixir with your own pumps.

As you do this, you will draw ahead stealing the game from square 1. P.E.K.K.A same lane as Golem, typically split 2m on opposite lane and 1 m on P.E.K.K.A lane.

Prepare to defend Prince/ Dark Prince etc on opposite lane while you typically want to keep your spell ready for your 1m lane.

Early game try to not rely too heavily on your P.E.K.K.A.

If you Pump up when they Giant and then you play a P.E.K.K.A same lane, the P.E.K.K.A is a -2 trade to start off with, unless you play a perfect Ice Golem to kite the Princes if he double Prince’s opposite lane you will lose your Tower!

So I would try to save the P.E.K.K.A till at least the Dark Prince is behind the Giant!

In which case, defending and cycling for a second Pump should be easy! Play cautiously and don’t overcommit and you should be perfectly fine! 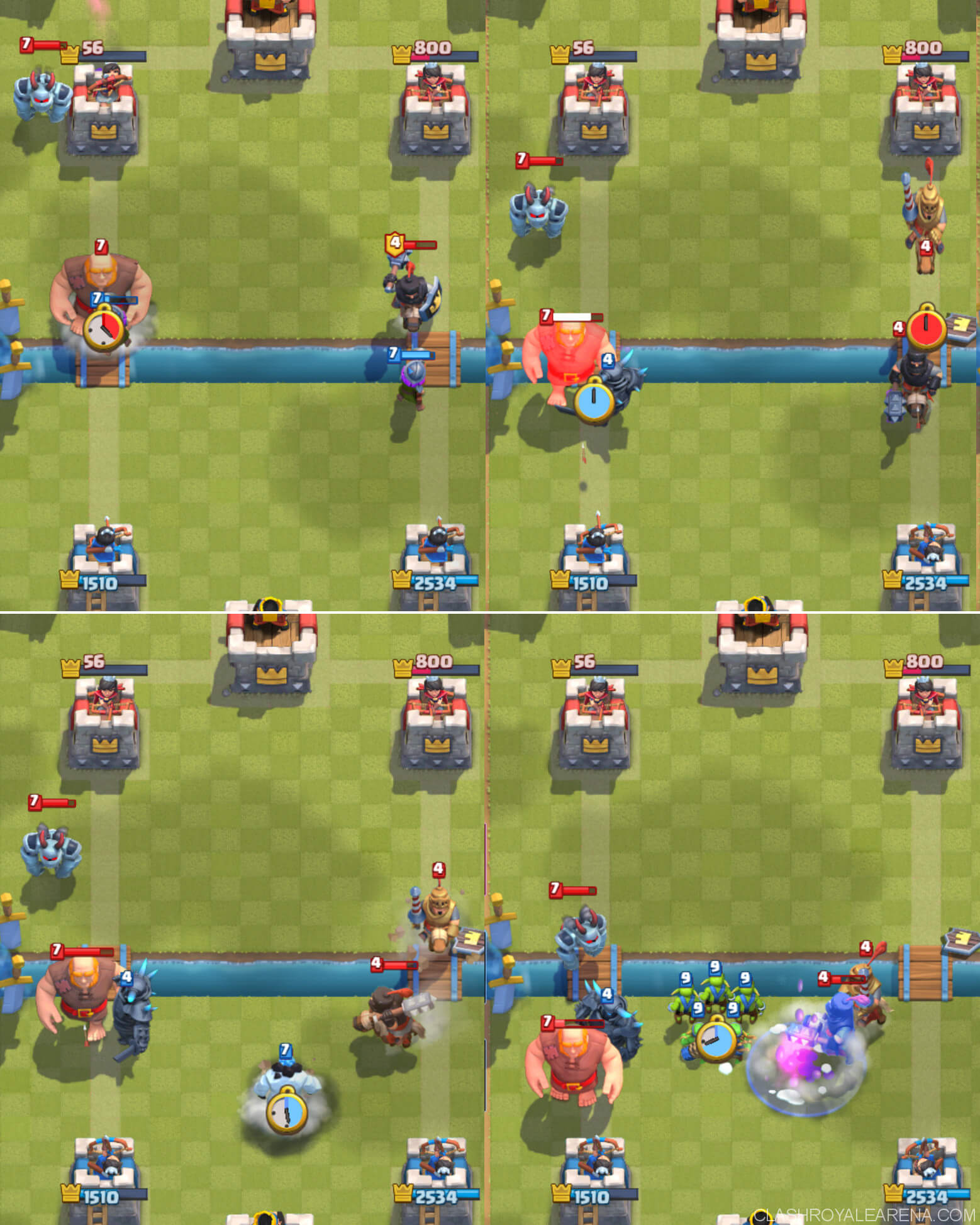 Here it was 2x Elixir so I had a rather easy time but I defended the Giant and push with P.E.K.K.A while I only used 5 Elixir on the double Prince.
My Ice Golem tanked the DP charge and a few hits while I played the Gang in such a way that Prince/ DP will aggro onto the P.E.K.K.A once the last is killed!

They will have either Rocket, Poison or Fireball.

You should never Pump up unless you have a Hog counter in hand but that being said keep track of your opponents spells because well depending on what calibre players you face you might face skilled opponents playing pre-emptive spells.

You have to outsmart them by outthinking em.

Pump up, defend their miners and get their pumps with your Miner + Zap and swarm troops if required.

Not too tough because when you guys start playing 3M same lane well… P.E.K.K.A 3 shots the 3M and tanks pretty much every single hot from all the other troops leaving you a very very easy win. 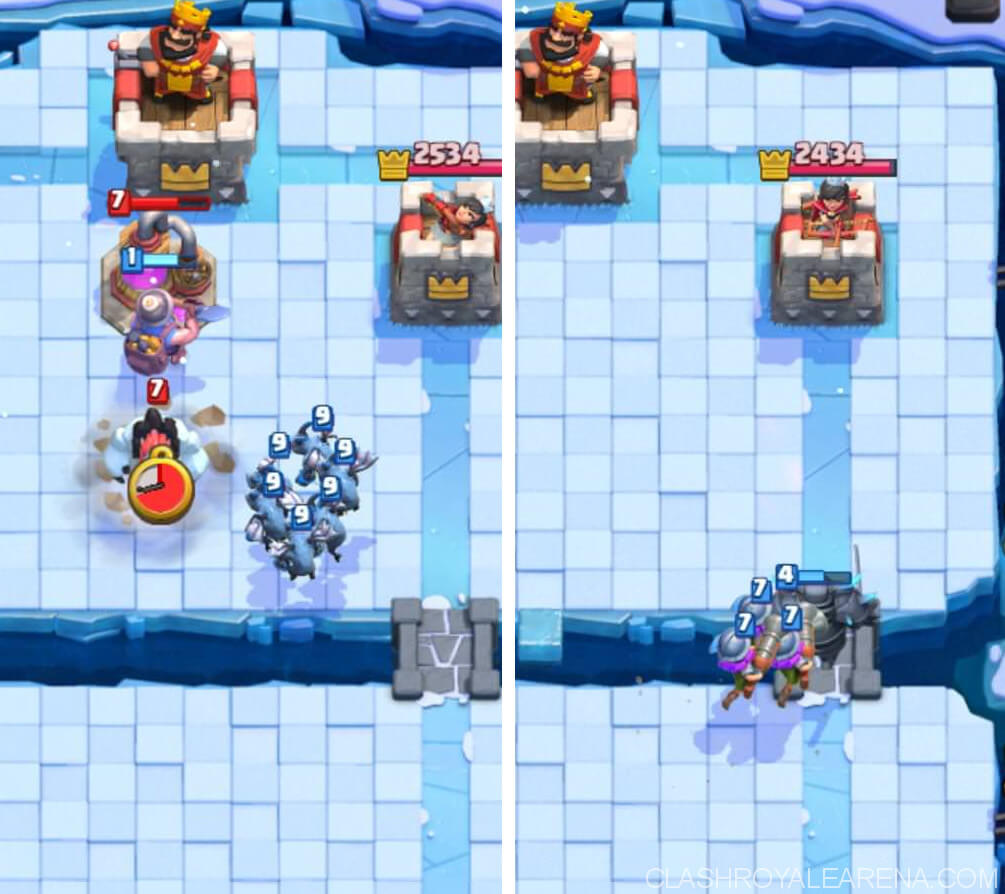 Defend your Pump and take down opponents Pump.

Save Gang or Horde for Princess and Barrel.

Use your Zap on offense vs this deck.

Once I get the Pump advantage I will start playing the P.E.K.K.A in the back and building a push somewhat like a beatdown deck, get them to overcommit, take care of Princess with Miner and you should be gold!

Not hard just don’t let them punish you early on by pumping up with a bad hand and unable to defend a Knight+ Barrel or Prince+ Barrel push.

You will take damage early on and from their later barrels but shouldn’t be too hard.

If you are facing Zap then that makes things a little trickier that being said it’s not that huge of a deal.

Keep pumping up and baiting out the Poison. Then start cycling your 3M in the back.

I typically P.E.K.K.A right in front of my 1 Musket then defend the P.E.K.K.A they play on my 2m with a Horde.

I usually play Horde before the P.E.K.K.A mainly so they don’t attempt to defend it with a Royal Ghost which can put you in a pickle.

Not a tough match-up but you need to bait out spells and cards in a smart manner.

Quite a solid deck give it a shot!

It doesn’t have an enormous amount of weaknesses that being said managing Elixir, making positive trades and keeping track of rotation are key skills when utilizing this deck.

It can beat pretty much every deck out there, unless you face someone with, Poison, Fireball and Lightning which makes life impossible for you. Which is unlikely so I’d say give this deck a shot, it covers 3M weaknesses like Golem and should give you the success I’ve been having with the deck.