Hey friends, its ya boy M4SON back with another deck. So after the update and playing in some random tournaments I got sick and tired of playing against Bowler Giant so I tried to craft an anti-meta deck against the giant! Anyways I felt with P.E.K.K.A buffed, being unable to get knocked back from bowler, and generally good against Giants I built the deck around her. Next up with any P.E.K.K.A deck you need to choose your back line. So after being inspired by darthjarjar, I decided to rock it out with 3 Musketeers. Following up with Baby Dragon / Barbarians as secondary tank, and Princess, Ice Spirit, Zap, Elixir Collector, as support cards.  So without for her a do lets just into the deck list analysis. 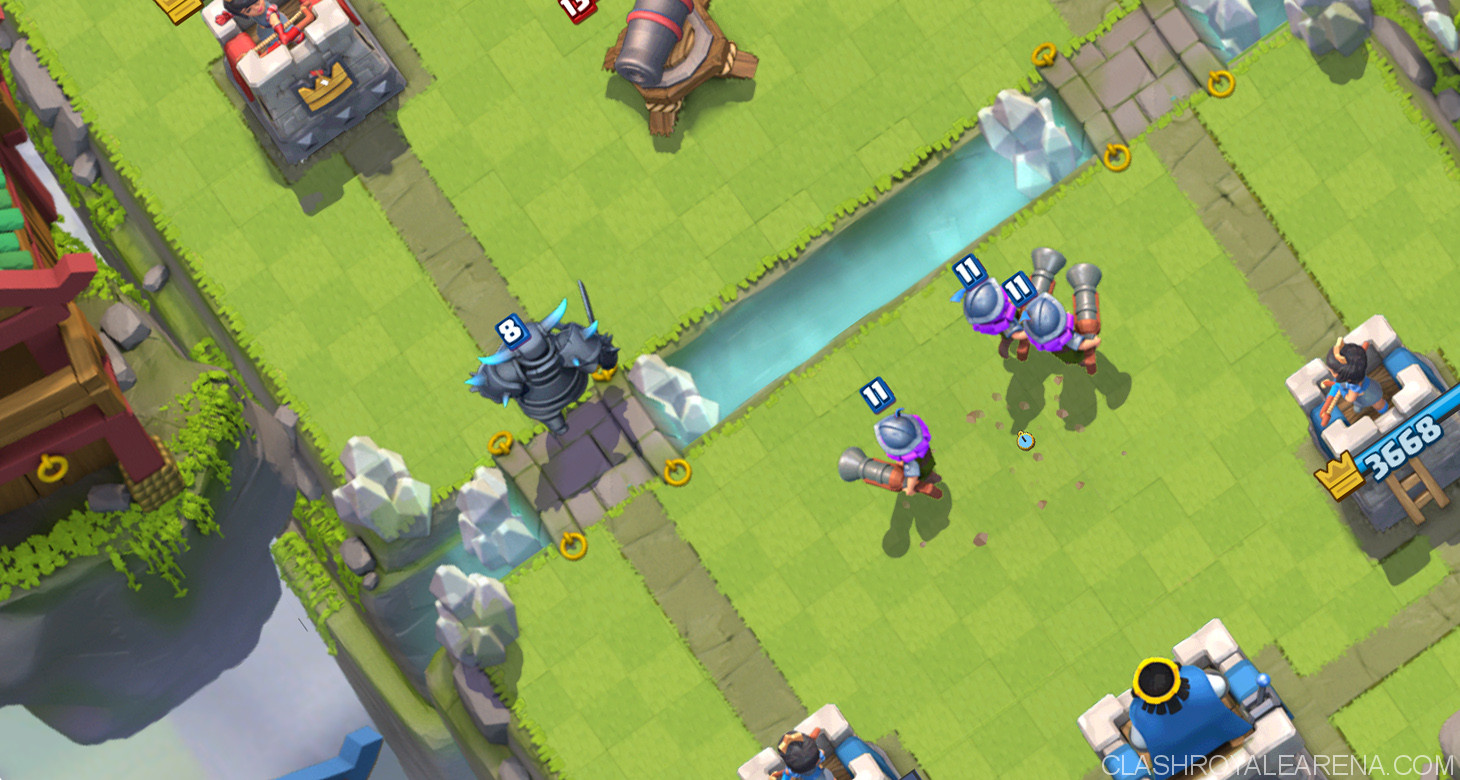 Stolen template from edihau because I’m a thief scumbag Youtuber

Slot [1]: Win Condition – Three Muskteer
Even though this is a P.E.K.K.A deck I feel the Three Muskies are really your number one win condition. Having not touched this card until recently I never realized the amazing split push they offer. Split them either behind the king tower, in front of the king tower, in the middle or even at the river depending the situation. Always try to have a tank like Baby Dragon or P.E.K.K.A to tank for the Musketeers. Even without your main tanks an Ice Spirit can do wonders against a single arena tower.  If the enemy decides to Fireball / Poison your Elixir Collector or Barbarians, situationally you can go all in on one side without splitting them. However, I still do prefer to split them because of the versatility it offers.

Slot [2]: Win Condition 2 – P.E.K.K.A
I feel there hasn’t been to many good P.E.K.K.A decks besides PPPP, and being super underrated in both ladder and tournament I wanted to give her a try. Like I mentioned earlier with her recent buff, being immune to knockback from Bowler, and being pretty effective against Giant I decided to give her a try. In this deck P.E.K.K.A is mainly used for setting up your pushes and being the big tank to protect your Musketeer. Set her in the back and let her slowly walk up. Generally, I like putting her into the weaker lane so she can defend and then counter push.

Slot [3]: Win Condition Support – Elixir Collector
With the deck running a average elixir of 4.5 an Elixir Collector is a must for this deck. The one struggle that I am still unsure of is not having a great Elixir Collector defense against Miners. Which is why I generally will position my Elixir Collector in the middle so I can use my Ice Spirit and arena towers to protect it. Situationally if I have enough elixir I will drop the P.E.K.K.A to protect it or even Barbarians. However, be careful of the VALUE TOWN Poison / Fireball. If the opponent does use one of the spells capitalize with the Three Musketeers.

Slot [4]: Main Defense – Barbarians
Now as mentioned previously Barbarians are one of the cards I am unsure of.  I tested Valkyrie, Mini P.E.K.K.A and Knight in this slot. I found these alternatives worked better at protecting your pumps, but didn’t offer the capitalize factor you can do if the enemy does a bad Poison / Fireball. But let me know what you guys think! Anyways Barbarians I use to protect my pumps, guard against Hogs and Royal Giants. During double elixir with Elixir Collectors down you can use Barbarians offensively to protect your Muskies. But be careful of the Poison / Fireballs!

Slot [5]: Defensive Support – Princess
Princess as the only legendary in the deck offers great versatility and support. Set her in the back and build up your push. Also great at baiting out Miners so your Elixir Pumps will go unharmed. During double elixir drop her more aggressively in the front middle so she can offer support to the split lane push.

Slot [6]: The Runner (Defense to Offense) – Baby Dragon
So this is actually the second card I’m not too sure of. But, I really love the baby dragon for a couple reasons. With the recent buff she doesn’t gimp out as much anymore. Also in this meta game I feel a lot of decks don’t have too much answer to air. Alongside being one of the few air tanks (other only being Lava Hound?) I feel the baby dragon offers insane versatility to the split push because it involves an aerial aspect. As well as her splash being great against Barbarians, Minions, Horde, etc.

Slot [7]: Versatile Response Card – Ice Spirit
Probably one of the best cards in the game right now. Always vouching for the strength of the Ice Spirit. For only 1 elixir you can cycle your deck, freeze for 2 seconds and can be used on defense and offensive. Use it to accompany either split push depending on the situation, or just solely on defensive. Great for trading with a single Musketeer, or even stopping Prince charges and Mini P.E.K.K.A.

Slot [8]: Spell – Zap
Gotta have one of the best spells in the game. Not much to say about zap. Use it to protect your Musketeers from cheap troops like goblins. Or use it to reset that scary Inferno Tower or Sparky shot. A well time Zap, can give you those extra Musketeer shots to win you the game.

Ideally you want to get your Elixir Collector down as your first play to gauge what your opponent is running, following up next is to protect your Elixir Collectors. If you don’t have a Pump in hand, you can either cycle with Ice Spirits or open with a backline Princess and let your opponents make the first move. Starting off with a Three Musketeer split right at the start can work too, but you will only be able to afford using your Baby Dragon and Ice Spirit to assist them.

Generally you want 1 Pump down and running to get the general split push up. Once you have a pump set up, drop P.E.K.K.A in the back behind the king tower. Then once it reaches the arena tower you will have enough to split your Three Musketeers in front of your king tower. The preferred split I enjoy doing is 1 behind the P.E.K.K.A and 2 into the other lane. Just as the 2 Musketeers reach the bridge you will have enough for a Baby Dragon to tank for them. Now this is where the utility cards Ice Spirit and Zap come into play. Put / use them accordingly based on what your opponent does. During Double Elixir you’ll be able to setup this same push with the added assistance of Princess and even Barbarians.

If the opponent plays a bad Fireball / Poison make sure your capitalize as much as you can with either the Barbarians or Three Musketeers. When you are able to take one tower down you can do the quick cheese Three Musketeer and Ice Spirit drop on the enemy sides of the map. This can catch some people off guard, as they will panic drop a troop and that troop will most likely get frozen. At times doing this quick tactic can net you an easy second tower.

That’s pretty much it guys, give the deck a try and let me know how it goes for you! M4SON OUT! 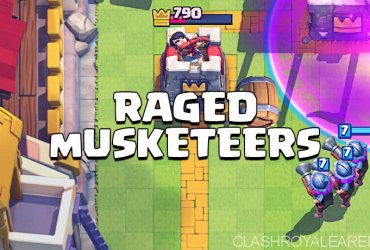 Hi, this is TheRealPlayerG with a deck guide here. This deck got me from 3000 trophies all the way to 4000 , to where I finally got my first legendary … 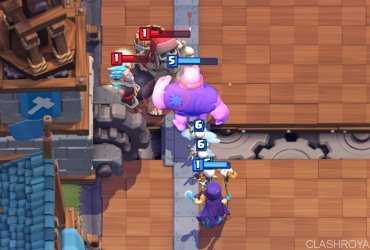 Hello everyone! I told my friends who were new to the game to check out CRA. But they didn’t see many decks for lower levels… So lower level players, you …