Hey there everyone, its Blackbeard here with my first guide. This guide is to a deck that I have been using for a very long time now and is sporting one of the best win conditions at the moment in hog. I’ve been using this deck for months now, and I believe I have figured out every possible way to play it, therefore I am making a guide to it.

This deck has the one main win condition in hog. While it may look like a very heavy deck, a Pekka beatdown in other words, it is actually quite the opposite. In this deck Pekka is used almost only for defence.

How to defend hog rider, the main win condition.

If you position Pekka correctly on a hog, the hog won’t get a hit on the tower, as the Pekka can take out most hogs in two swings, unless the hog comparably out levels the Pekka. While the Pekka at 7 elixirs is a bit too expensive to try and play on the hog every time, there is also a skeleton army and electro wizard. If they have enough elixir for hog, you should have enough for either of those. While zap has recently become the most popular card in the game, skeleton army is a bit more risky to play. But if you are able to draw out their zap with your inferno dragon or some other card in your deck, then just try and make sure to remember when they played zap, so you’re able to know when they will have it in their hand next. In the early stages of the game, if they play hog right of the bat, then you can play skeleton army on the hog, except have another card ready to play, such as E wiz. But this way, early in the game you know what spell they can use to counter skeleton army, and can therefore try and draw it out.

How to defend Golem, another main win condition.

While some Golem decks seem absolutely unstoppable, there are only very few people who know how to use the Golem decks to their best extent. And if you match up against one of those players, oh well, go for a tie, but if you don’t get it don’t be too disappointed. But even for somebody who can use a Golem deck well, this deck is an extremely good counter to all Golem decks. There is a very precise way you can defend a Golem and is actually quite easy. You don’t have to panic and play every card you have in your hand at the moment they play Golem. But you need to have Pekka in your hand. If you don’t have it, cycle out the spells, or any other cards in your hand, until the Pekka comes in one or two cards. But once you have Pekka (or if you did have Pekka when they play golem) then play the Pekka at the bridge on the opposite side that the Golem is on. I know this sounds crazy because you are never supposed to play Pekka at the bridge, especially when they have Golem along on the other side, but trust me on this, because it works. So since you’ve played Pekka at the bridge, this prevents them from being able to back up their golem with anything (Night Witch, Mega Minion, Lumberjack, etc). Therefore, they are spent on defending your Pekka, and while it will probably not get a hit off on the tower, that’s fine because they will have spent all their elixir on defending the Pekka, and since all you played was Pekka, you will be loaded with elixir by the time the Golem reaches the bridge. Here you play inferno dragon on the Golem, and even if they have E wiz they won’t have nearly enough elixir for it until the inferno dragon has worked its magic, and gotten the Golem into two Golemites. But I don’t know of a popular Golem deck that has E wiz in it so you should be safe there. Sometimes you can play skeleton army as well as the inferno dragon just to be safe, or after the Golem turns into the two Golemites, then you can play skeleton army on them since the inferno dragon can only take down one at a time.

How to defend 3 musketeers, a third main win condition.

Usually, 3m users will play them behind their king tower. Here this is rather tricky, but one easy counter is your triple spell. If all 3ms are together this is the most effective counter to them other then Mega Knight, in my opinion. If your levels are high enough, Log, Zap and arrows will take out all of the musketeers. My levels are usually high enough for this, but since I’m not a max player sometimes they aren’t quite high enough level to take them out completely and leave a tiny bit of health left on the 3ms. Now if this happens you can leave them for the tower to deal with, as the tower will be able to take them out in one shot. But be careful, if there is only a bit of damage left on your tower, then you should do something about the 3ms because even though the tower can take each of the out with one arrow, each musketeer will still get one shot off. But before the reach the bridge, with their tiny bit of health left, if the play something in front of the 3ms (Barbarian Ram), then play electro wizard on them. Because if they have enough elixir for barbarian ram then you should have enough for electro wizard. But with the tiny bit of health remaining in the musketeers, since your triple spell attack, the E wiz’s landing damage will take them out completely. And then the E wiz will also be able to stop the barbarian ram as well before it can hit the tower

The triple spell (log, zap, arrows) is a distinct advantage against most players because they will usually have only two spells our sometimes even one. The log is used for and usually should be used for, goblin gang, or anything with substantial health, more then the zap can take. Don’t use log on skeleton army unless you have to. Zap can take care of skeleton army fine, spear goblins and bats. Arrows should be used solely on minions hordes and/or minions. The only time you can use arrows on something else is when you are sure they don’t have minion horde. If they just have minions its fine to use arrows occasionally throughout the battle on something else, as zap can take enough health off of pretty much any level of minions that your princess tower can take them down with one shot.

Now we have talked enough about defence in this deck. Now its time to talk offence.

Like I said at the beginning of this guide that this isn’t a Pekka beatdown deck like it may look like. This is, actually rather a chip deck. Use your hog for offence and if it gets even one hit on the tower after you play him, consider it a success. But try and let it get two hits sometimes, using your spells to castaways small troops the opponent may place in defence of the hog. If they have a building like a canon, tesla, or even inferno tower, that can stop the hog, then that isn’t too big of a problem. As I say, the hog is your main win condition, and Pekka is only for defence pretty much. You can use Pekka sometimes on offence, but only sometimes. But therefore, when you know they have a building you can draw it out with the Pekka. When you play the Pekka they might panic and play the bunch of cards until they are out of elixir, and even if they don’t they will probably play their building on the Pekka, leaving your hog free to go.

While I said sometimes you can use Pekka for offence, the only time you can is in 2x elixir. Then you can make a push (if you want to instead of just continuing chipping with the hog) with Pekka, Electro Wizard and Inferno Dragon, with your spells ready to take out minion hordes, goblin gangs, skeleton armies, etc. Or you can stick with defending with Pekka and co and chipping with hog. Either way works great against all decks, as I have tried both ways.

This deck works well in Legendary Arena, Challenger 1, 2 and 3, and even Electro Valley. Some may go so far as to use it in Hog Mountain, and I won’t say no to do that, because it works well everywhere. Just the main problem with using it in low arenas is that your levels won’t be as good as they should for this deck. Hog Mountain is the lowest arena you should use it in I think. 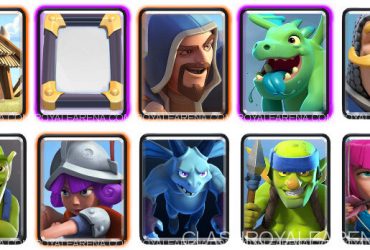 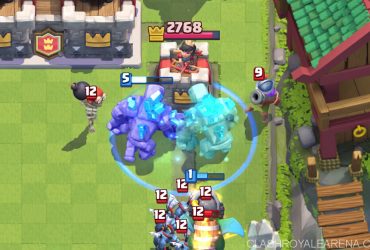 Bonjour a tous, cèst Supermarine! Today I have taken a break from all of my trophy pushing, Challenge, and Tourney decks, and I am giving you guys a super fun …