Hey guys what’s up, it’s Mortar Rocket FTW here with my first ever guide here on CRA, and I’m going to be talking about the most overrated cards in Clash Royale.

Yes, there are a lot of cards which I just don’t understand why people still love.

There was a guide a while back about the most underrated cards so this guide is the opposite and obviously we’re in a different meta.

Everything in this guide is totally my opinion so no hateful comments please if I talk about a card here which you love….

Without further ado, let’s get on with the guide! 🙂 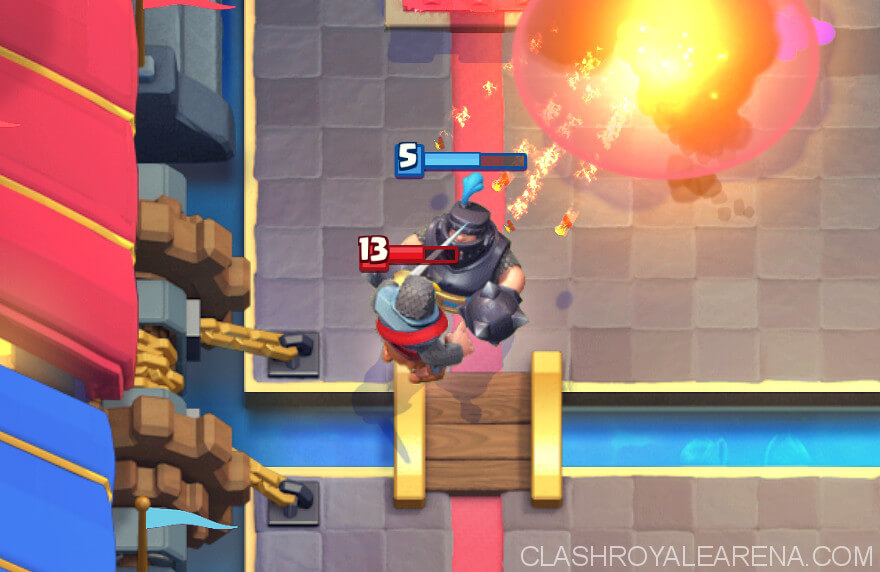 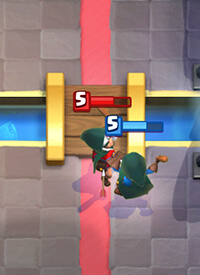 This gal has been used in a lot of decks since her dash initiation buff.

Back in the last Bridge Spam meta, she was SO strong coupled with the Battle Ram (which has also unfortunately been nerfed). But she’s a really squishy troop, with moderate HP only.

I believe people use her because she’s a 3-Elixir legendary with a dash…which seems very appealing to people.

At tourney standards the Bandit has 780 HP, which is more than a glass Cannon but less than a mini-tank, with similar HP to the Night Witch.

She’s also easily countered. Her DPS is low and can’t one-shot tourney level Goblins with her regular attack, which makes her an easy target for positive Elixir trades.

She is vulnerable to any cheap swarms, cheap buildings (e.g. Cannon and Tombstone, which shuts her down pretty easily.

Around my trophy range (2900-3000) there isn’t much Bandit action going around because it’s only unlocked in Arena 9 or in legendary chests from lower arenas, but personally I think she’s really easy to counter no matter which tank or mini-tank she’s paired with.

My deck hard counters Miner Bandit, Golem Bandit, Hog Bandit…because I have Inferno Tower which basically hard counters all of that. 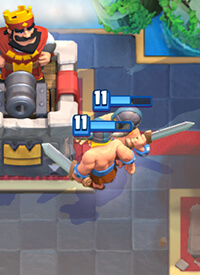 This damaging duo has been around for a long time now.

They used to be really overpowered because of over leveling but now many people have figured out how to easily and cheaply counter them for a positive Elixir trade. BUT- on TV Royale I have seen so many E-Barbarians still running around in Hog Mountain and Jungle Arena.

Overleveling with Royal Giant is a much bigger problem because it buffs his damage and hit points massively for guaranteed damage but with E-Barbarians I don’t see the fuss about overleveling.

They are negative-trade makers. Even Guards (a very underused and underrated card) can counter them. You can counter it with Skeleton Army, Goblin Gang, Knight+ Ice Spirit (in my deck), etc. etc..

It’s just really easy to counter them now and even with a Valkyrie tanking for them you can easily counter them with something to distract the Valk and something swarmy like the aforementioned.

If they DO connect to your Tower, it’s a massive problem but there are so many ways you can deal with them before them reaching your Tower.

In my opinion they aren’t reliable as a win condition unlike many people think (*ahem* Salty Ladder FTW!) because they don’t target buildings and even with their fast move speed they have a pretty slow attack speed (1.5 secs).

Also, E-Barbarians aren’t great tank killers, due to their high cost and slow attack speed and how easily they will die from back-end support troops. 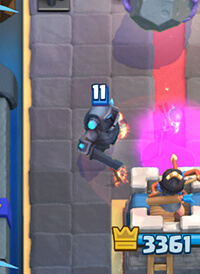 Ever since the Mini P.E.K.K.A’s damage was buffed it’s now used in a lot of meta decks like Elemental Bow, Hog Lightning Control, and Golem decks. But I still think Lumberjack is much better.

Mini P.E.K.K.A has higher damage than the Lumberjack but it doesn’t kill tanks faster enough and in my opinion Inferno Tower is much much better in tank killing.

In my opinion Mini P.E.K.K.A isn’t a very reliable tank killer due to the glass cannons shredding him down quickly.

Simple 1-Elixir Skeletons turn him into pancakes and it’s extremely hard to get him to the Tower against skilled players if you’re using him in a counter-attack.

It has one of the best, if not the best DPS for a single-target melee unit but its role that people use them in (tank killing) is not effective.

Lumberjack is much more threatening as it is faster and drops a Rage spell when he dies, so he works much better in Golem decks, raging the Golem when he dies.

Mini P.E.K.K.A just can’t give that pressure that Lumberjack does.

Also, even though Mini P.E.K.K.A is a rare, he needs to be overleveled in order to work well to get enough damage and HP, and since he is a Rare it takes a lot longer to request and obtain cards from chests to upgrade. 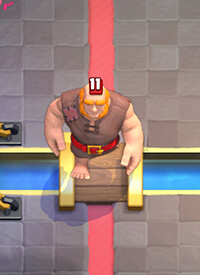 This 5-Elixir tank is a staple in beatdown decks- the first real tank you obtain when you start the game.

People in lower arenas have a lot of trouble cuz they don’t have Inferno Tower or Dragon, which are the most no-brainer counters to the Giant, and they don’t know about proper building placements.

Many people still use it, but I really don’t see the point. Even though Giant is the cheapest tank, it’s not a good starting move, because 5 Elixir is too expendable to use at the beginning of the match.

For some reason Giant is used a lot still in light beatdown when I believe the Golem is still better.

Firstly, Golem decks are often very heavy and have pumps, and since Golem has a lot more HP it’s easier to build an unstoppable push.

You can stop a Giant with a Cannon but for Golem decks Inferno Tower is best, and the support troops behind the Golem (e.g. swarms) can distract and kill the Inferno Tower in a jiffy.

Giant decks just can’t really cut it in high arenas in my opinion because it is too easy to counter. 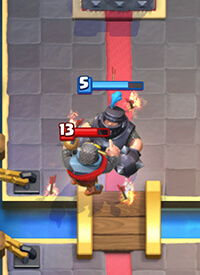 What can I say?

This new card isn’t even out to the public yet but I can already see many flaws of the Mega Knight.

Everybody in the community is saying he’s OP and I bet there’s a flurry of decks people are writing with the Mega Knight.

I have to admit, when I first heard of the Mega Knight before the update, I thought he was really OP because he was a 7-Elixir tank with medium speed and splash damage and insane spawn and jump damage.

But really as I’ve developed more in the past few months as a player, I found a bunch of things that make the Mega Knight not as OP as everybody thinks.

First of all, his HP isn’t all that good. It only has about the same health as a Giant (coincidentally no. 2 on my list) and it doesn’t even target buildings.

Mega Knight is a tank but he has a medium speed and jumps so he’ll just get away from the support troops too quickly, so he can’t be used as a tank in beatdown.

He’s a very awkward card because he is tanky but isn’t used as a tank. He’s also very expensive for the damage output he provides.

Even a simple Knight can do a very good job of cleaning up the Mega Knight if the Tower is helping and the Mega Knight is on his regular attack. P.E.K.K.A melts MK and also is actually viable as a tank.

In my opinion the huge HP doesn’t actually help. Mega Knight would be much better if he had less HP and therefore became cheaper in Elixir. [poll id=”59″]

Thank you so much for reading my article, I hope you enjoyed! Don’t be salty if your favorite card is here, and stay tuned for more guides (If I have the ideas :))